As most sleaze fans know, Italian and American films have done more than their share of imitating each other since the days of neorealism; however, despite their worldwide success, Italy's unique mondo, nunsploitation, cannibal, and Nazi-porn innovations remained largely confined to Europe throughout the 1970s. 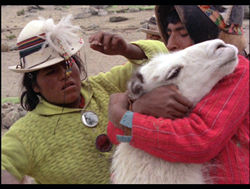 One oddball exception is the American Brutes and Savages, an absolutely ridiculous Mondo Cane knockoff complete with a disco-inflected score by the previous hit film's composer, Riz "More" Ortolani.

The film's director and "star," Arthur Davis, takes the audience on a whirlwind and highly dubious tour through the world's "primitive" jungles, where natives apparently spend their time putting on face paint, carrying around spears, hunting animals, and engaging in various sexual rituals. Some of the atrocity footage is hilarious in its ineptitude, such as one native falling prey to a group of alligators who leave floating limbs bobbing in the water. Unfortunately, the animal-on-animal gore appears to be completely real and coldly staged for the camera; bunnies, armadillos, and snakes falls prey to bigger predators, though the nastiest highlight comes when a big jungle cat is attacked by gators in what appears to be a real life, violent feeding frenzy. Ah, and let's not forget the ritualistic, native llama sacrifice, which is up there with the turtle scene from Cannibal Holocaust on the unwatchable scale. Fortunately Davis had the sense to end his film with the most ludicrous bit, which is best experienced with no warning beforehand; let's just say that if you thought Anchor 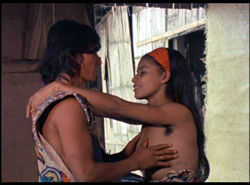 Bay's Mountain of the Cannibal God restoration was over the top...

Too addle-brained and sloppy to even be considered harmfully racist, Brutes and Savages trades in all the mondo conventions without a single clue as to what makes them work. That's part of its lurid charm, of course, as the film lurches from one vignette to the next with no rhyme or reason. Look, it's natives scampering up and down a riverbank! Ah, now it's time for erotic sculpture! Oh no, here comes a hungry eagle! Oops, now it's time for some graphic brain surgery! As if that weren't odd enough, the whole enterprise is narrated by a hopefully well-paid and obviously unbilled Richard Johnson (The Haunting), who turned up shortly thereafter in Lucio Fulci's Zombie. For better or worse, you've never seen or heard anything like it... and of course, it comes fully endorsed by the Institute of Primitive Arts and Cultures. 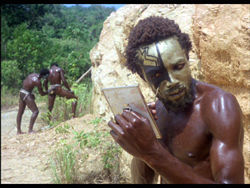 As much as one can fault the film, no quibbles can be had with Synapse's DVD. The original 1.33:1 aspect ratio is maintained with a bit of windowboxing on the sides, which will most likely not be visible depending on the overscan settings on one's TV. Image quality is superb, with rich, film-like colors and very crisp detail; it's highly doubtful the theatrical prints circulated by Aquarius looked even remotely this good. As an added bonus, this transfer from the original negative comes from a longer cut (labeled Uncivilized) complete with 15 minutes of additional footage; this will come as a nice surprise for owners of the long discontinued MPI VHS edition. Unfortunately that also means more llama mayhem, so consider yourself warned. (And whatever you do, don't watch it on a double bill with The Emperor's New Groove.) Extras include an Arthur Davis "diary" containing many extracts from a Brutes and Savages tie-in book and excellent, no-punches-pulled liner notes by Chris Poggiali.