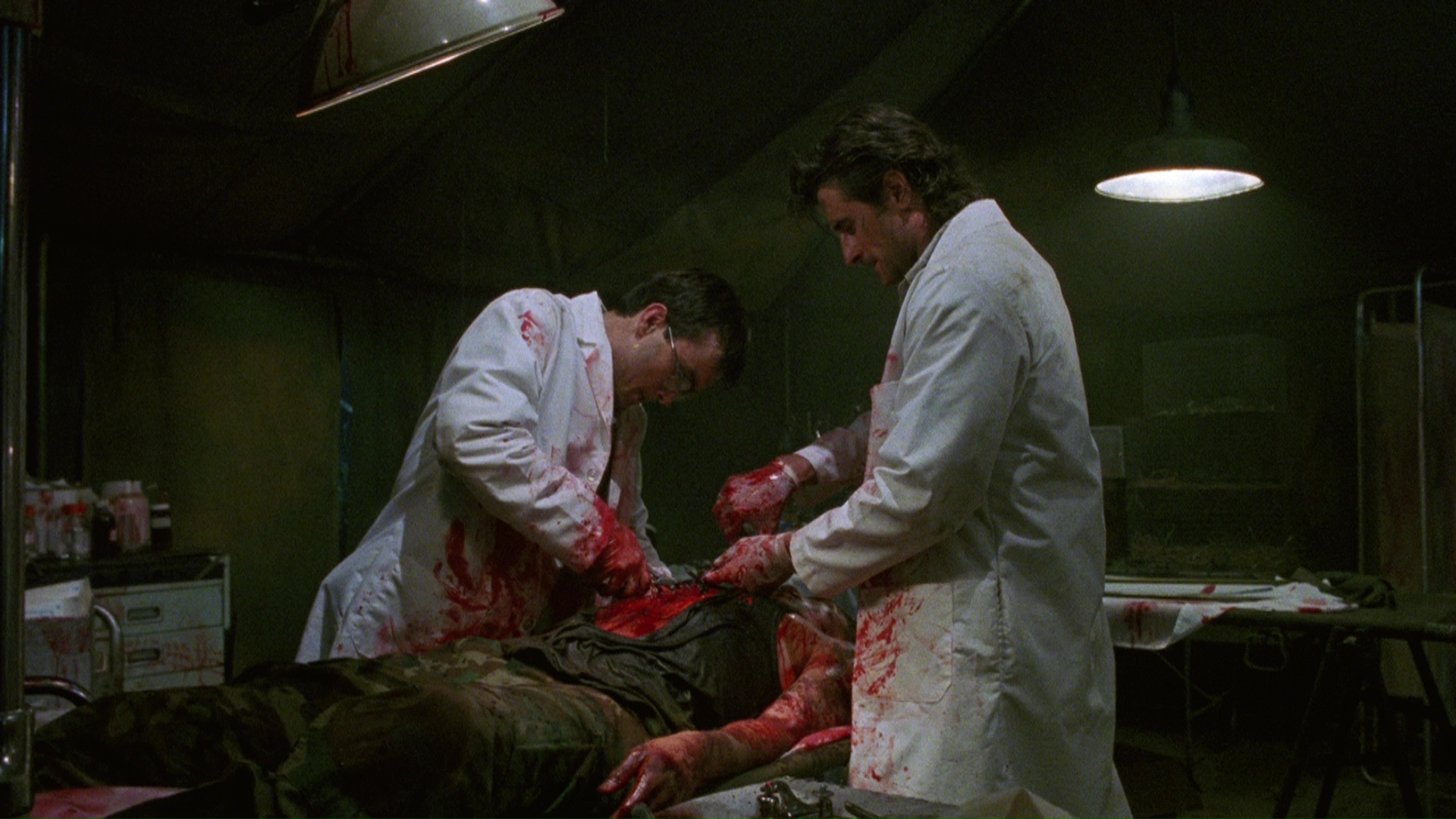 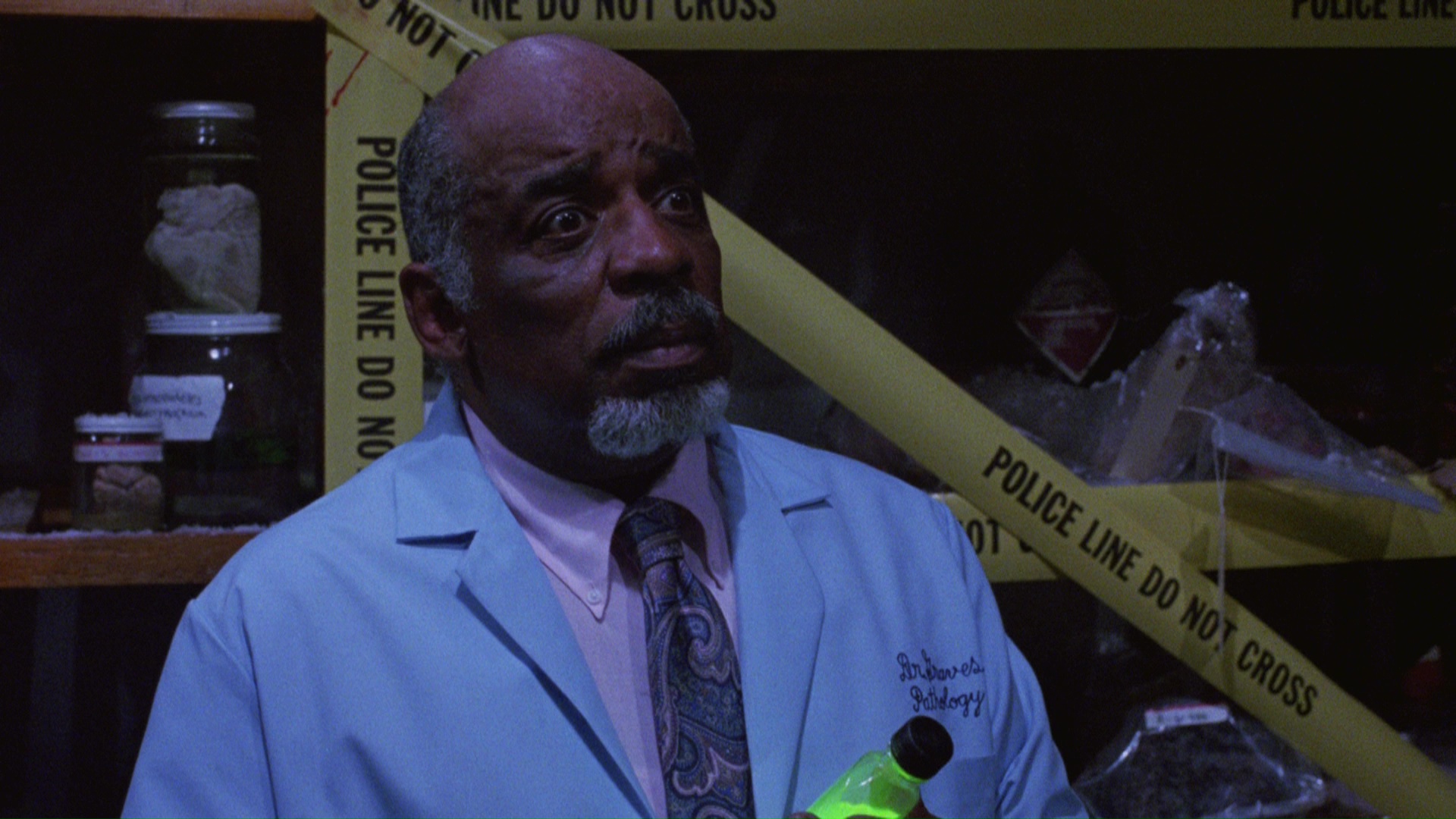 Largely ignoring the outrageous bloodletting and sexual depravity of Stuart Gordon's original Re-Animator, director Brian Yuzna (Society) provides a sequel more focused on his own personal obsessions-- namely, lots of grotesque, squishy things palpitating in front of the camera. While it can't hope to surpass the first film in terms of witty dialogue or transgressive imagery, on its own terms Bride of Re-Animator makes for a brisk, enjoyable hour and a half, and fans should be happy to see most of the characters returning for another round of reanimation and dismemberment.

Six months after the grisly Miskatonic massacre, renegade med students Herbert West (Combs) and Dan Cain (Abbbott) return to the scene and continue their unholy experiments. Using the heart of Megan Halsey, the boys utilize separate reanimated human body parts to construct an entire woman (tastefully including "the womb of a virgin" and "the legs of a hooker"). Meanwhile, the severed head of Dr. Hill (somehow still intact after being squished in the first film) decides to seek revenge against West, and a snooping police detective prowls around just to make things difficult. As if that weren't enough, Dan's new love, Francesca (Udenio, a.k.a. Austin Powers' Alotta Fagina), remains blissfully unaware of her beau's morbid pastime.

As with the prior film, this was released on VHS by Live in both R-rated and unrated editions; in this case the running times are very close, with the R-rated version dropping some brief bloody bits (including some arm mayhem) and featuring some different, toned-down 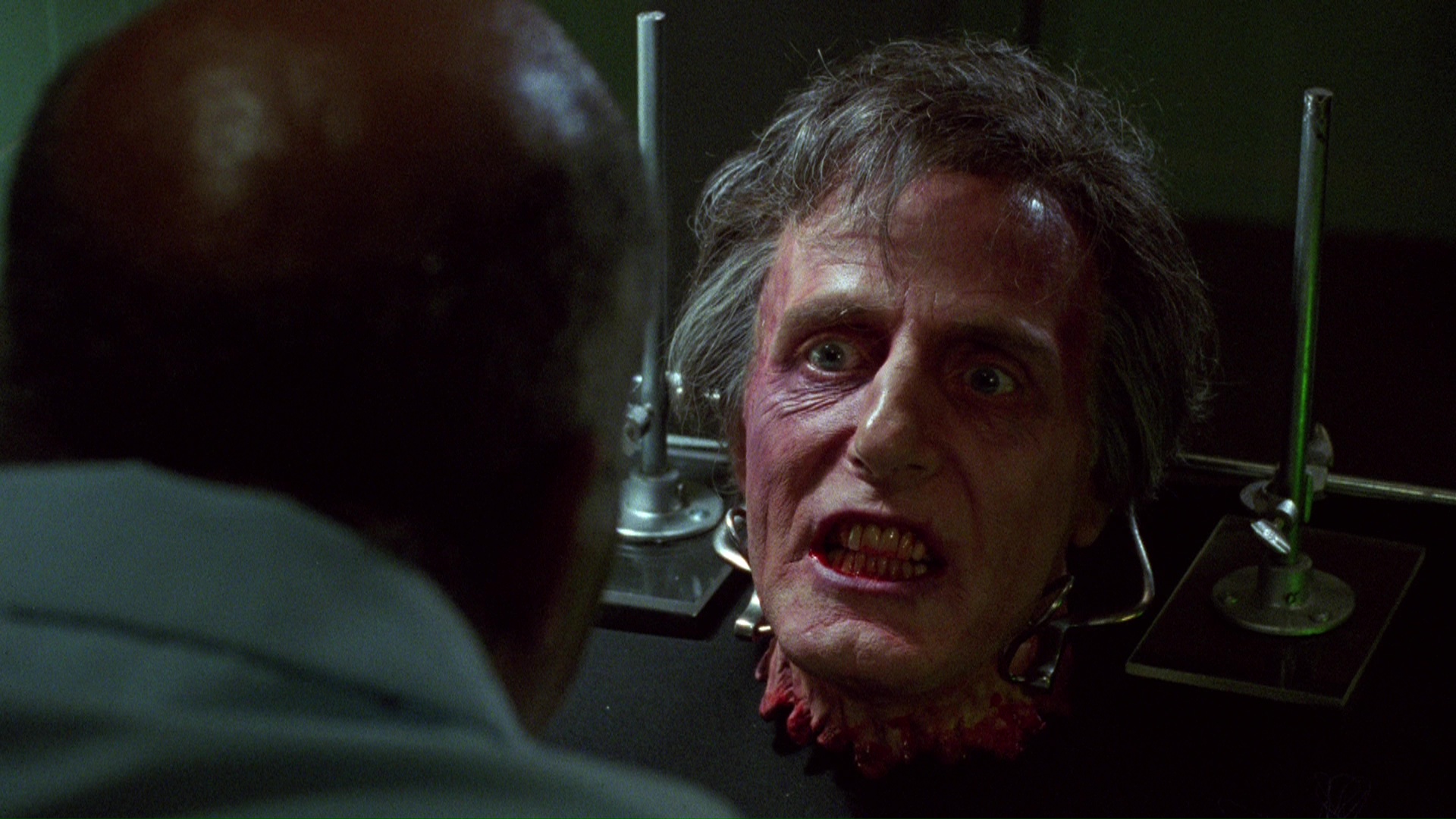 takes and angles during the finale (including one bit in which a major character rips apart from the head down). Image Entertainment issued the unrated one on laserdisc at the same time, which was the release to get until the DVD era rolled around.

Pioneer's much-hyped special edition DVD in collaboration with Artisan was released in 2003 with a wealth of viewing options and supplements designed to keep gorehounds happy for hours. The R-rated theatrical cut and the unrated version are included in open matte full frame, with an optional "theatrical matte" option that superimposes black bars over the image to simulate 1.85:1 framing. In this case the technique works quite well for the most part as the matte can easily be switched on and off simply by using the DVD remote's subtitle button. As the liner notes explain, the unrated version was culled from a slightly inferior print, and it shows; while passable, the unrated edition looks somewhat smeary and features an unpolished stereo sound mix. The R-rated side improves noticeably on the previous laserdisc version; furthermore, the Ultra-Stereo soundtrack is much better mixed. In the extras department, the unrated side includes a 22-minute making-of featurette ("Getting 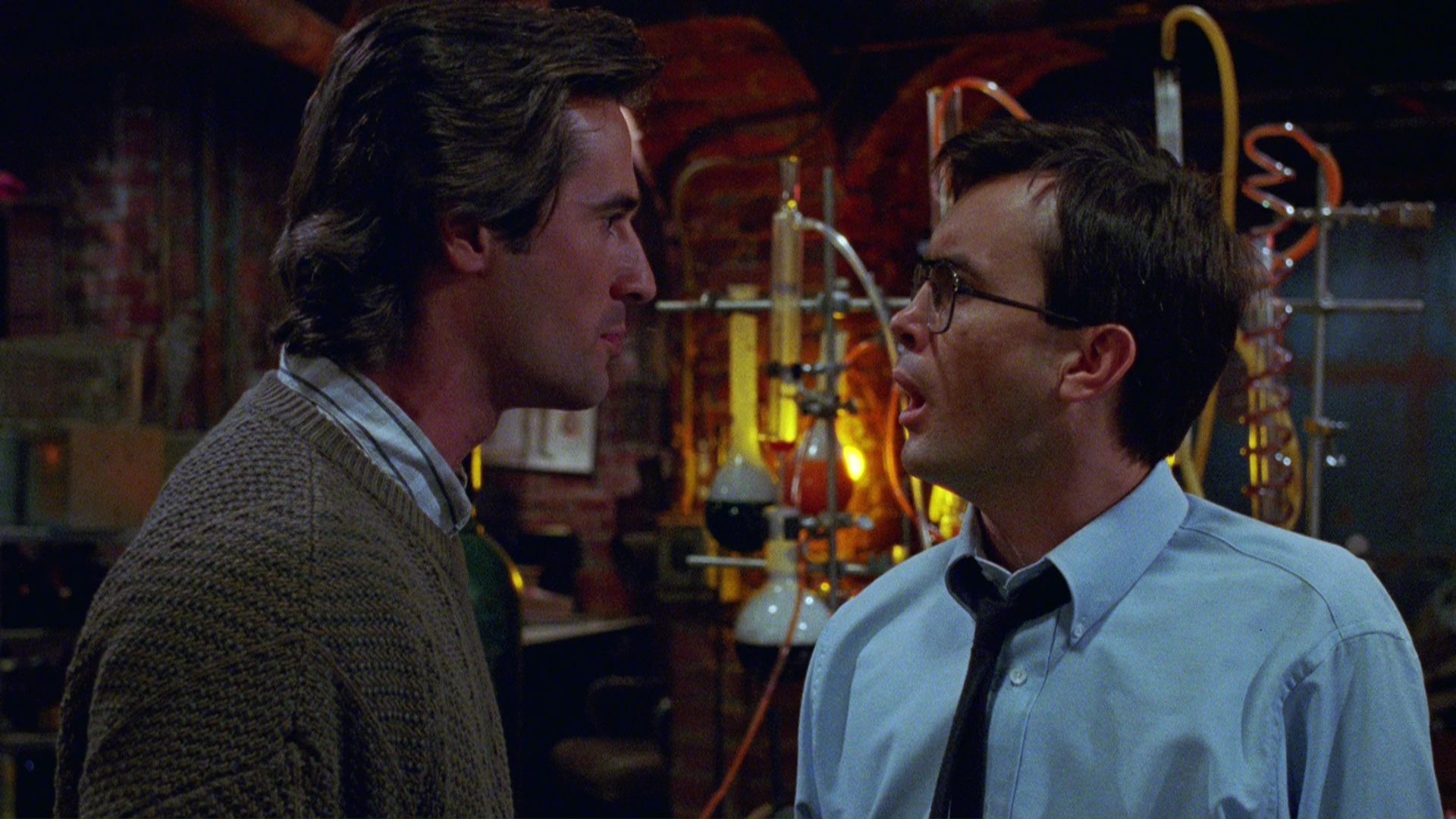 Ahead in Horror") including cast and crew interviews as well as looks at the elaborate special effects. On the R-rated side, look for a "trailer" (actually the video commercial), "Dr. West's Casebook" (a collection of photos from the film and behind-the-scenes), and best of all, the deleted opening scene of the film, which fills in a number of gaping plot holes. In particular, the fate of Meg after her re-animation and West's escape from those strangling entrails are finally covered; one can only guess why this scene was cut, as it forms a much more logical bridge between the first film and the second. Interestingly, this work print scene is followed by a great deal of rough footage shot during its filming from several different angles. Also included is an early deleted sequence in which Dr. Hill's head becomes an attraction at a local sideshow (a nice follow up on West's classic line in the original). Both versions feature two running commentary tracks, one with Combs and Abbott (who sound like good buddies and provide some nice chuckles along the way), and the other with Combs, Yuzna, and virtually the entire effects crew including visual effects supervisor Tom Rainone, John Buechler, Mike Deak, Bob Kurtzman, Howard Berger and Screaming Mad George. Both tracks reveal a 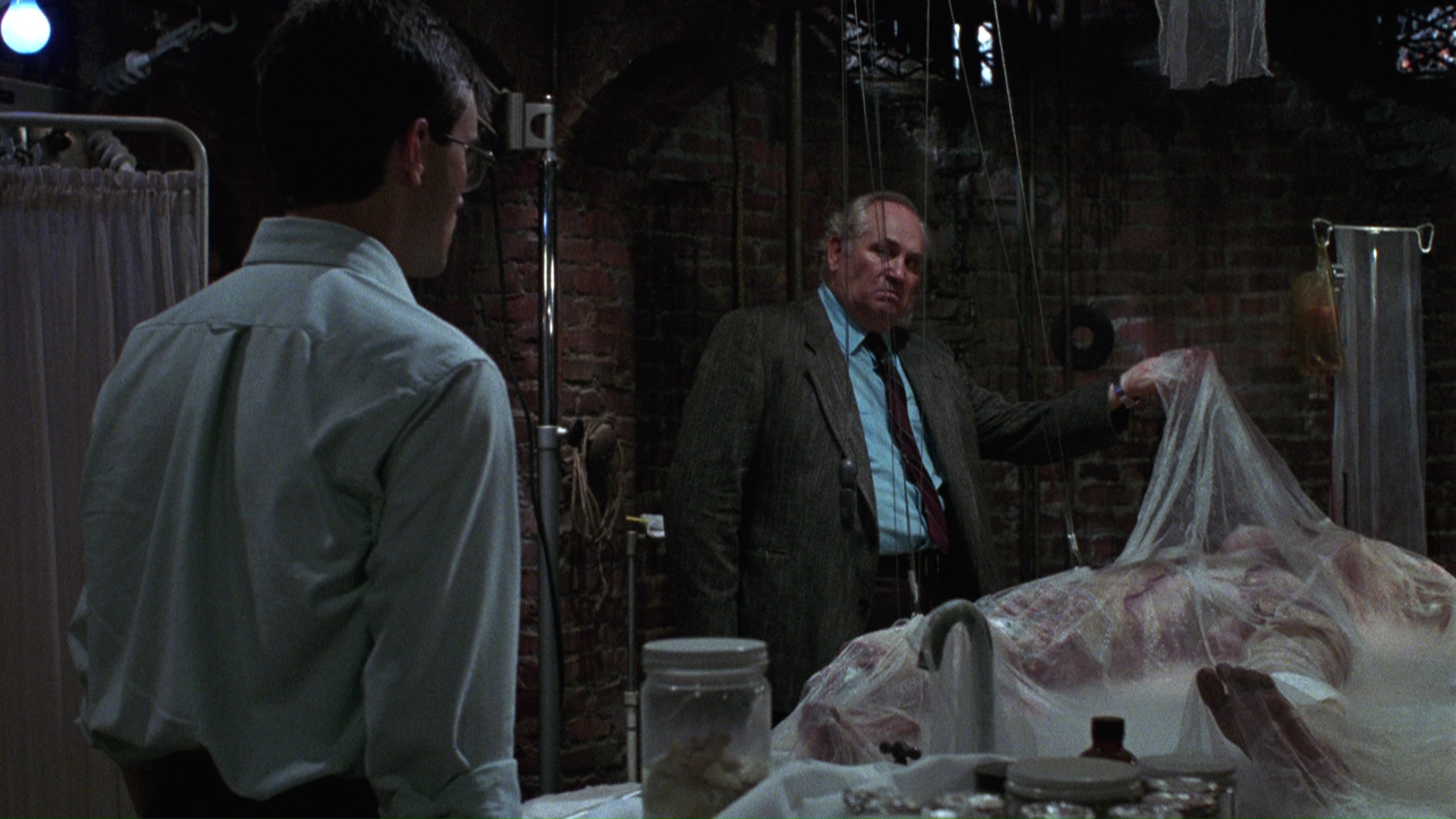 great deal of nostalgia and enthusiasm for the project, and while it can't really compare to the original, many skeptics may find themselves regarding this film much more fondly after experiencing it in so much depth. A no-frills version was later issued on DVD from Lionsgate as part of a six-film horror collection and as a standalone release, while international versions generally issued the unrated full-frame version with a trailer.

Now let's jump forward to 2014 as the inevitable Blu-ray editions started taking shape. As with Society, TLEFilms Film Restoration & Preservation Services in Germany on behalf of and commissioned by Capelight Pictures undertook a new 2K scan of the film in both its unrated and R-rated versions, with the first release debuting in Germany from Capelight as a standalone Blu-ray with just the unrated version and a much more lavish three-disc mediabook containing separate Blu-rays of the R-rated and unrated versions as well as a DVD. The transfer looks really spectacular, breathing fresh life into the film with a vibrant color palette and countless layers of details completely invisible on past releases. The colorful appearance revealed here makes for quite a different viewing experience, and the restoration of the original deeper, more atmospheric black levels is also a major plus. The 1.78:1 framing is also a bit looser than the matting on the prior DVD and looks satisfying throughout. Audio can be played in English PCM 2.0 stereo or German 5.1 DTS-HD MA or PCM 2.0, with optional subtitles in English or German. (And believe me, you haven't lived until you've seen Dr. Hill's severed head with flapping bat wings screaming in German!) Both previous commentaries are carried over along with the "Getting Ahead in Horror" featurette and the two work print excerpts with making-of footage. New here are a 90-minute "100 Years of Lovecraft" podcast in German, a hammy 68-minute "Dark Adventure Radio Theatre" production of Herbert West - Re-Animator (weirdly in English with no German language options), a 2-minute clip of the restored transfer of the first Re-Animator (which is out in the UK and Germany - avoid the US Blu-ray like the plague!), the real theatrical trailer, and a bonus red-band trailer for the original Re-Animator, plus bonus trailers for The Woman, Chained, Society, Fresh Meat, Rubber, Dead and Buried, and Boondock Saints II. Note that this release is marked as Region B but seems to play in Region A players without an issue. 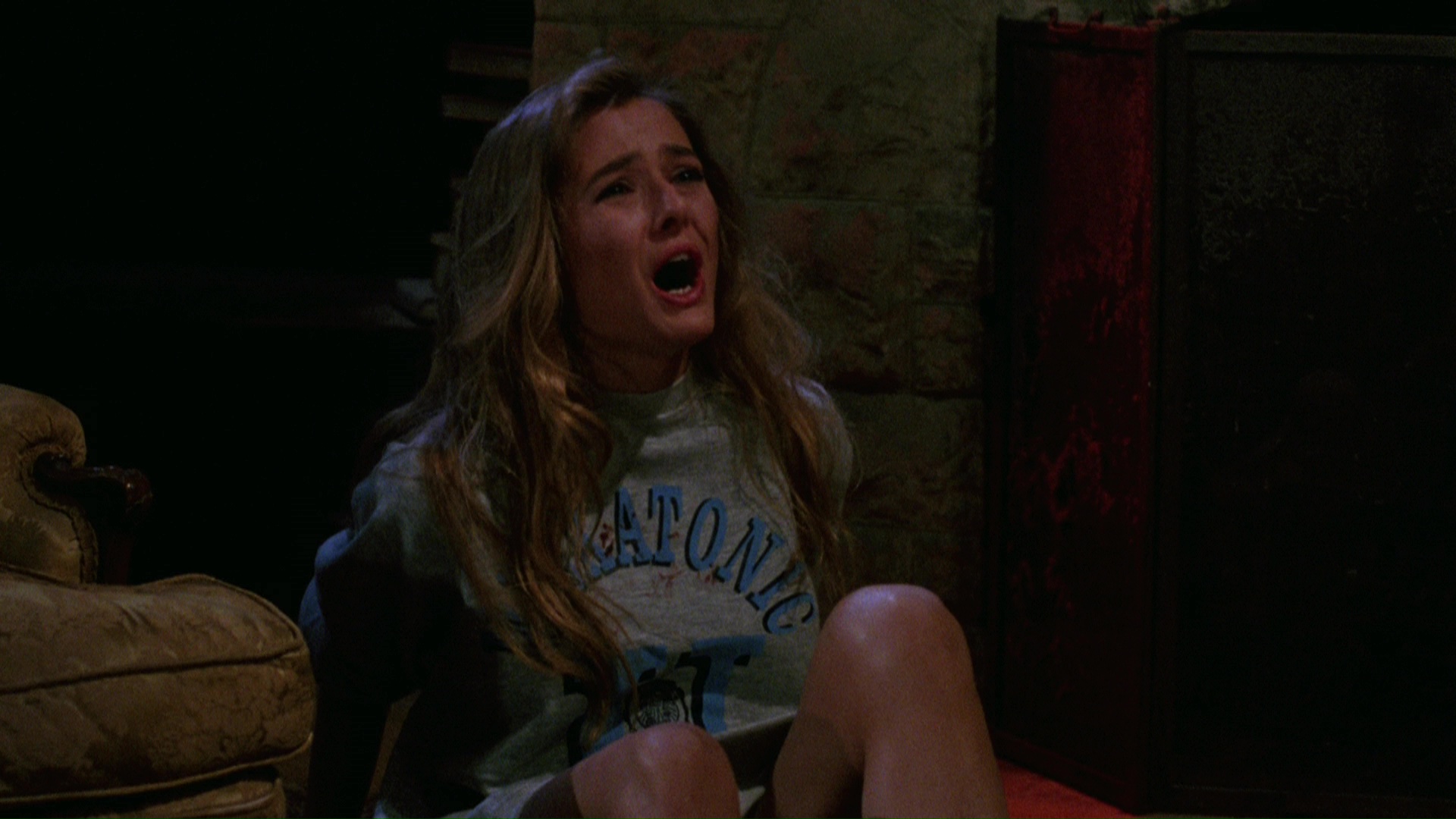 In the Spring of 2016, Arrow managed to get the film out of distribution limbo for English-speaking audiences with simultaneous US and UK releases as a a limited Blu-ray/DVD set divided exactly the same as the German release. The first Blu-ray (and the DVD) features the unrated cut from the same superb transfer; apart from some very minor compression vagaries in the background of darker scenes mostly involving cloth textures (the Arrow features a slightly higher bit rate), they look identical. The 2.0 PCM English audio is presented with optional subs, and the two prior commentaries are here as 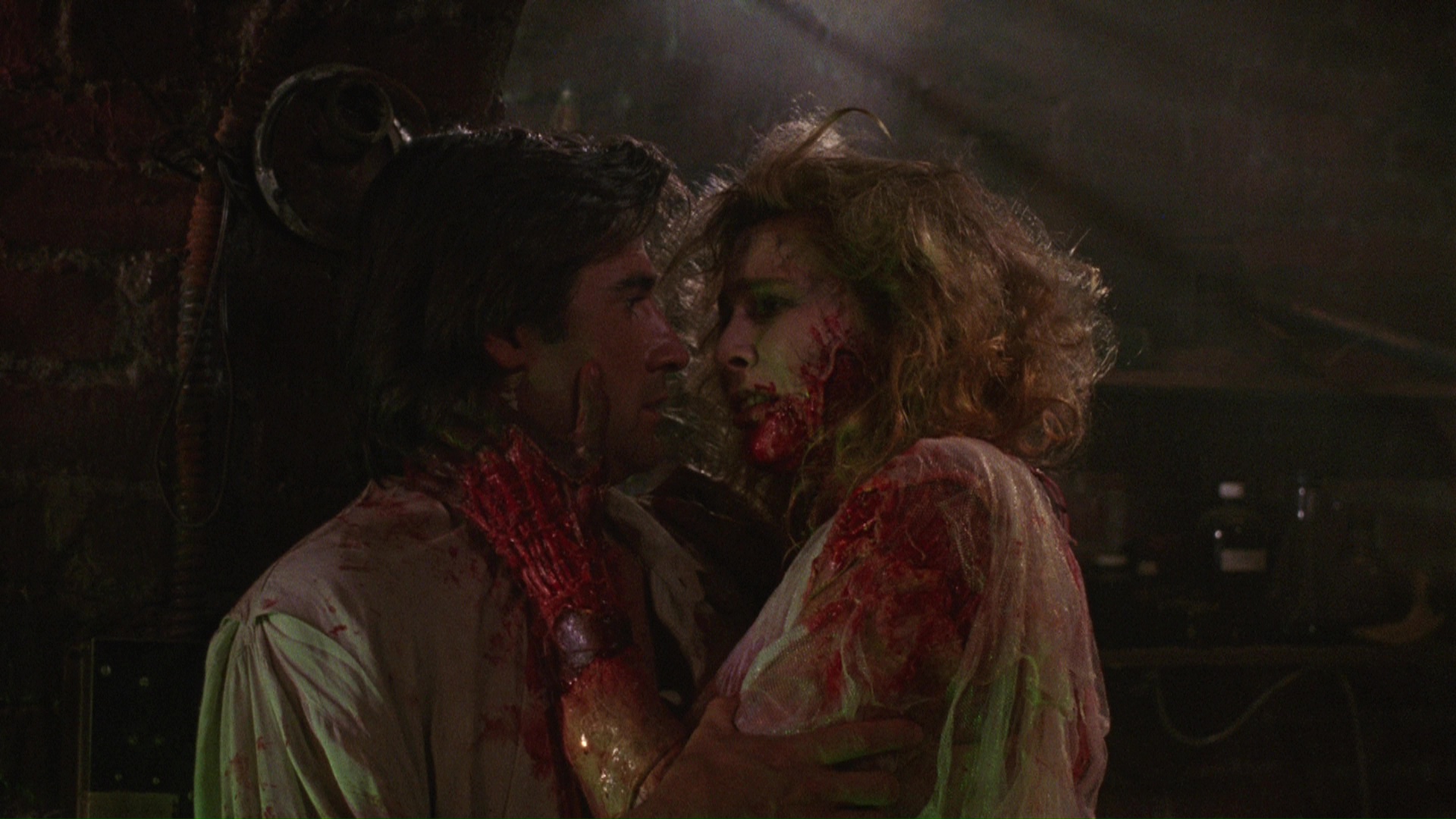 well. Also included is a new Yuzna solo commentary moderated by David Gregory, offering more of a retrospective look at the film, the influence of the three-film cycle, and observations like the influence of William Castle, his own awakening to Lovecraft via the first film, and the unique appeal of Screaming Mad George monster effects. On the video extras side the "Getting Ahead" featurette reappears along with the two cut segments and the trailer, but there's a fair amount of new material as well. The 9-minute "Brian Yuzna Remembers Bride" offers more context about how the film came about including comments about a possible version of Dagon intended before this, other ideas for the story including a bizarre variation involving presidents and celebrities, and how being a newbie director affected what wound up in the script. The 14-minute "Splatter Masters" features new interviews with the effects crew including KNB's Robert Kurtzman, Screaming Mad George, Tony Doublin, and John Buechler, with a bit of linking provided by Yuzna; get ready for lots of discussion and behind-the-scenes footage covering what sounds like a fun but very exhausting shoot. Exclusive to the bonus Blu-ray with the R-rated cut is a raw 14-minute reel of behind-the-scenes footage, some of it glimpsed in the other featurettes, with a lot of great coverage of Kinmont in her full bride gear and the entire effects crew at work applying grisly makeup to various extras (including Johnny Legend). The package comes with another trademark Arrow-commissioned artwork design, this time courtesy of Gary Pullin. So to sum it up, if you're a completist you'll want to hang on to the first US DVD and the Capelight set for their own little extras and quirks, but the Arrow definitely gives you the most bang for your buck. 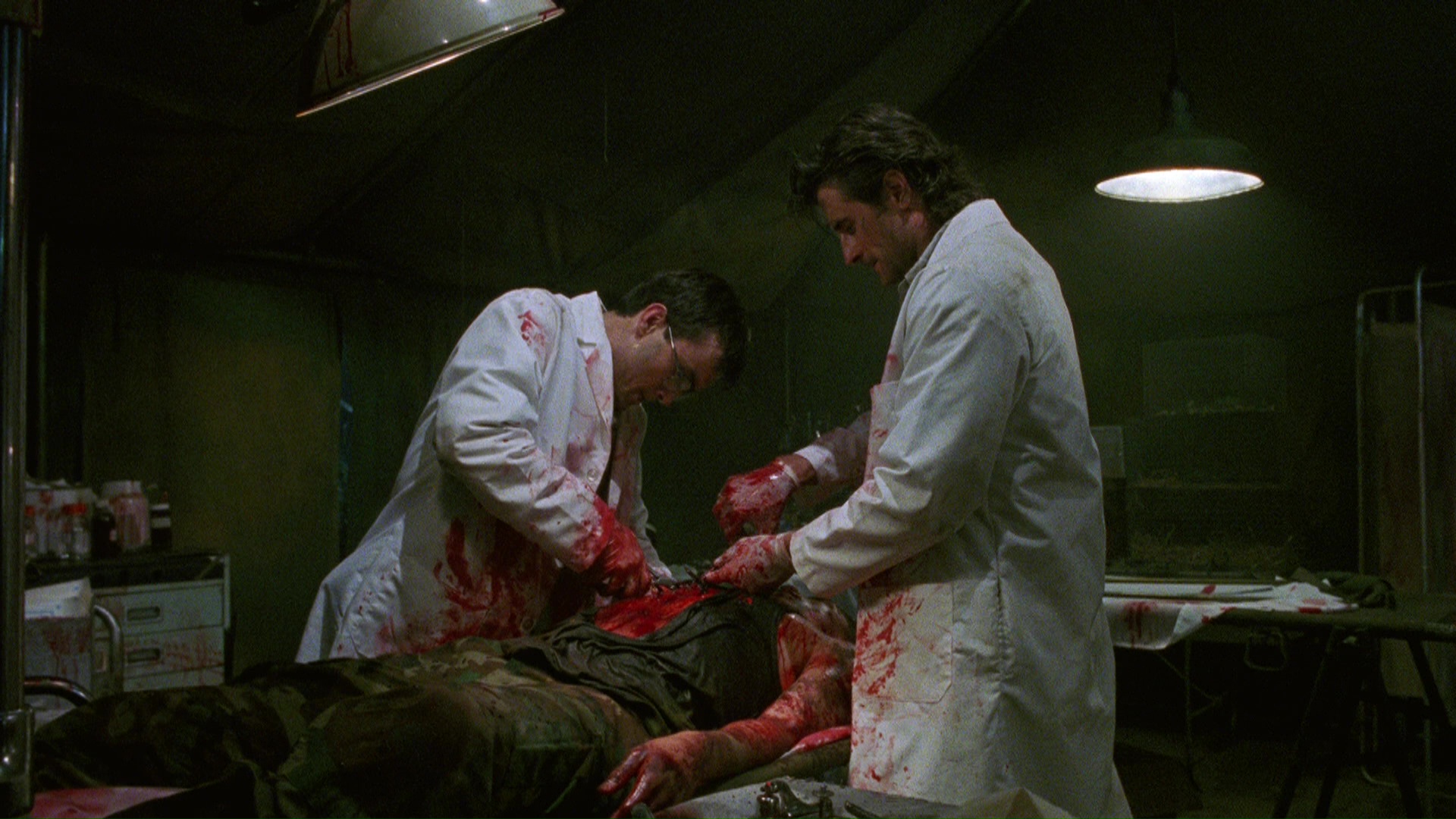 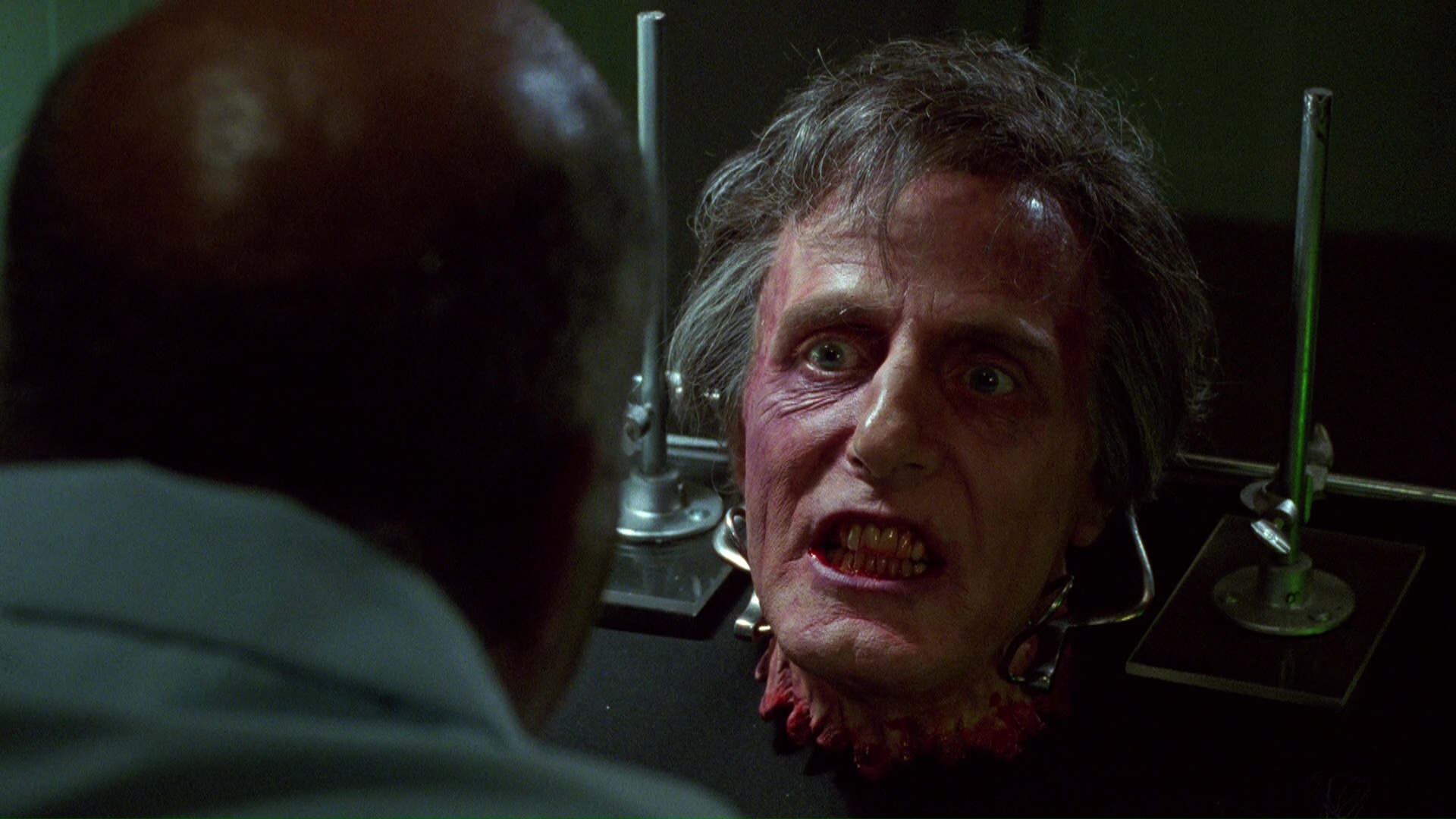 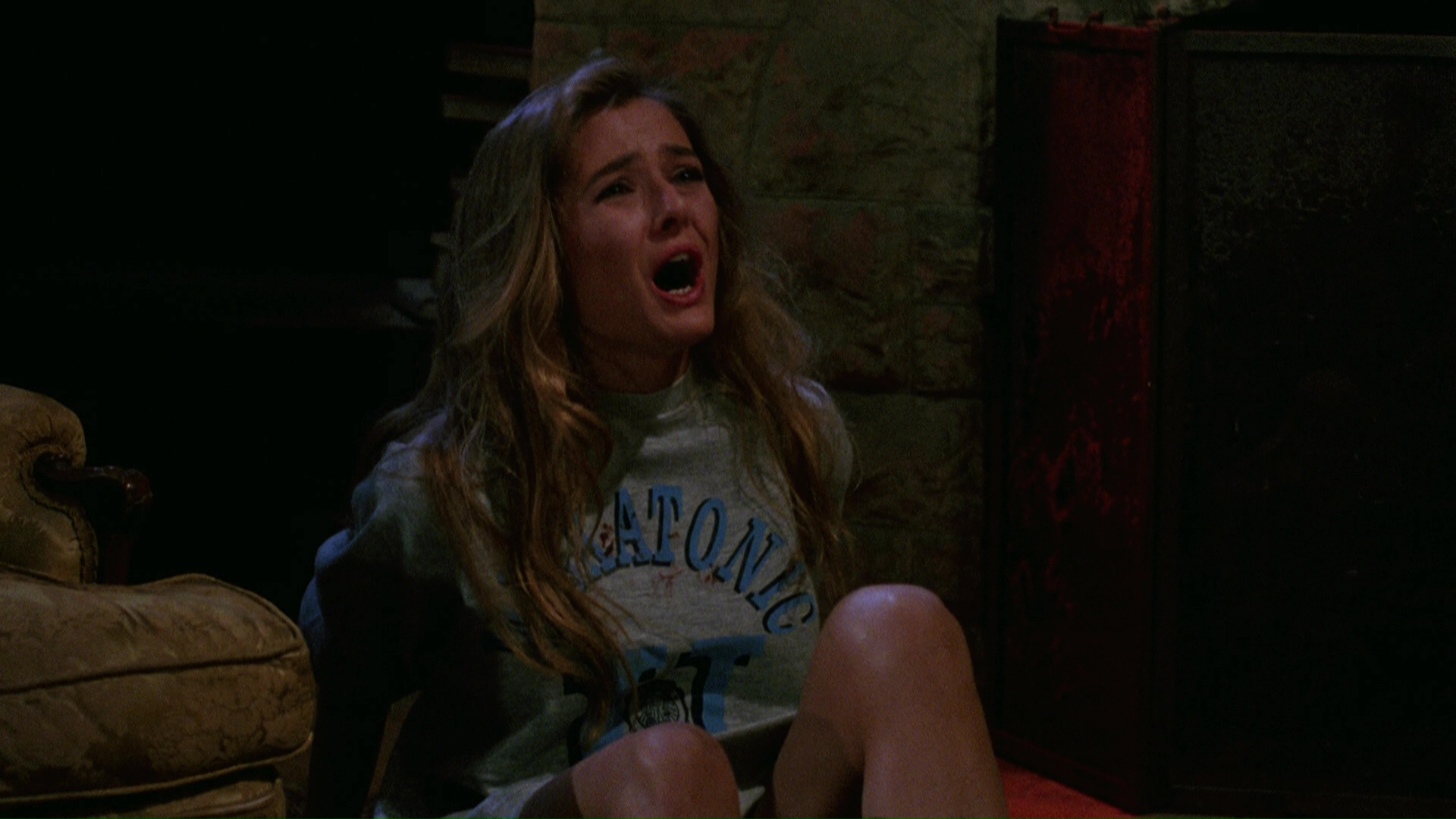 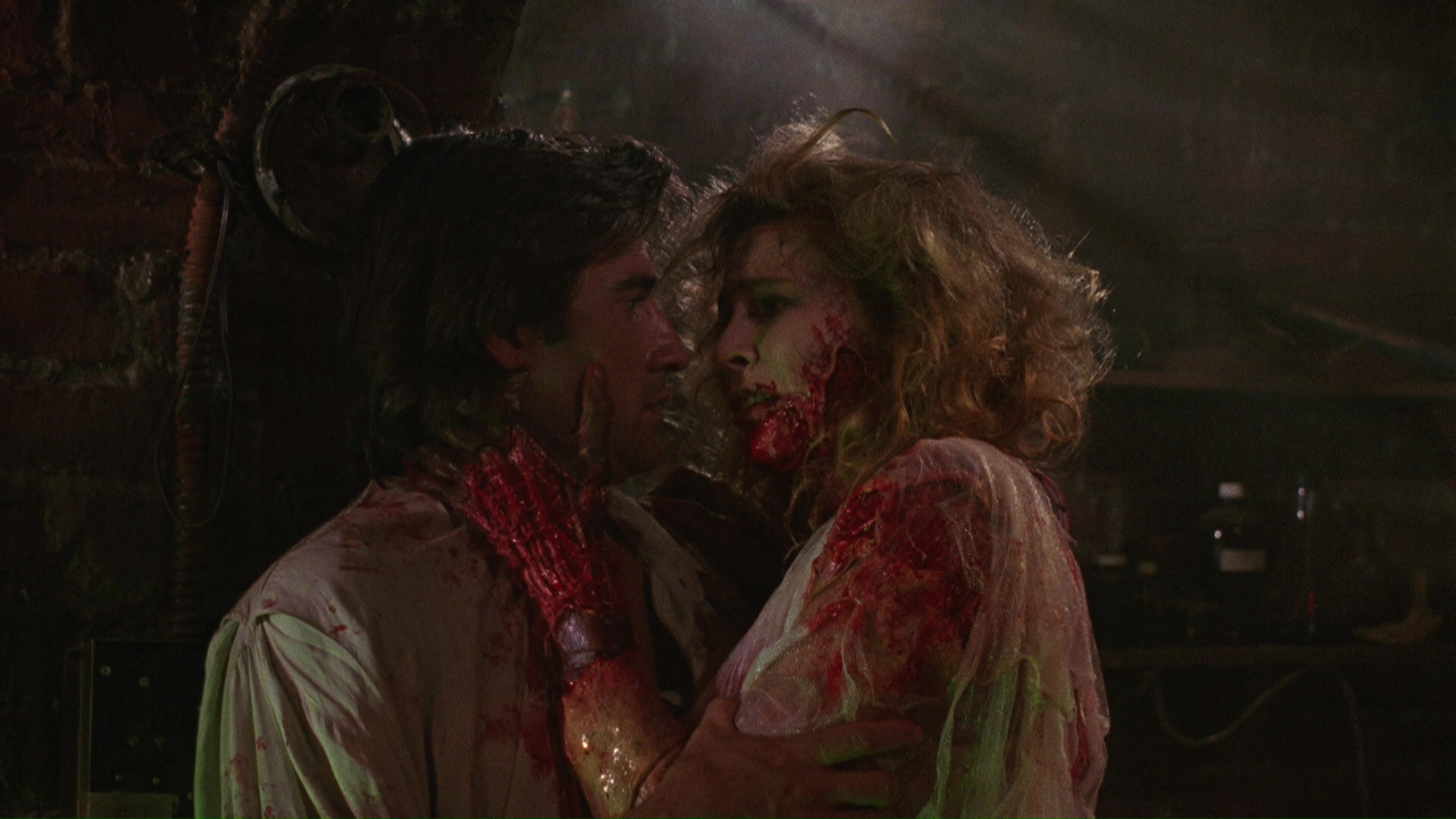 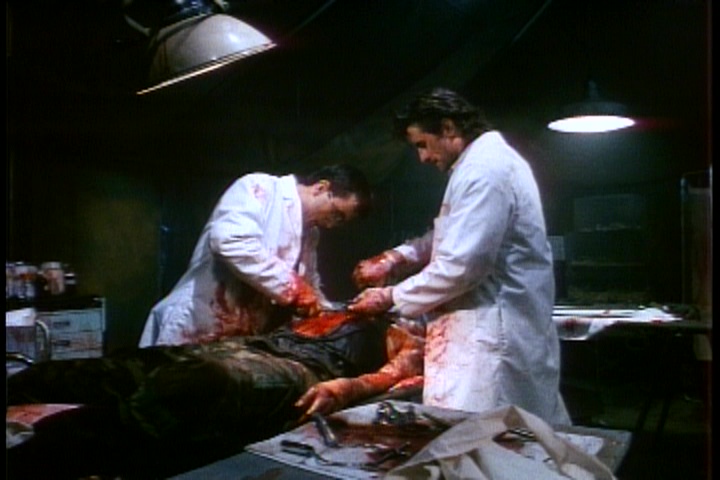 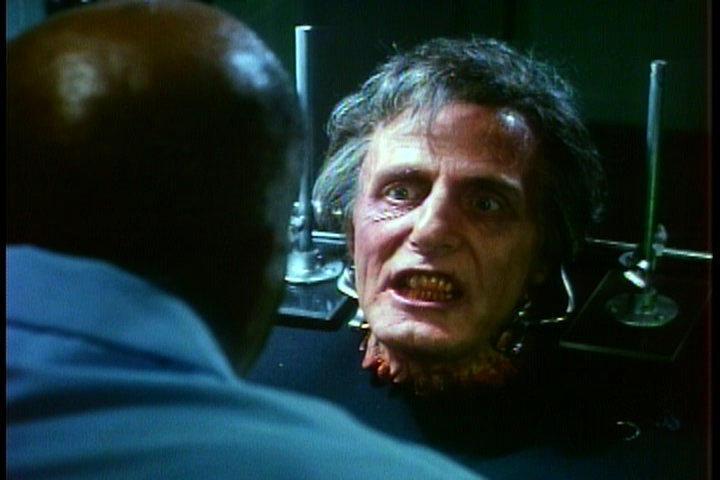 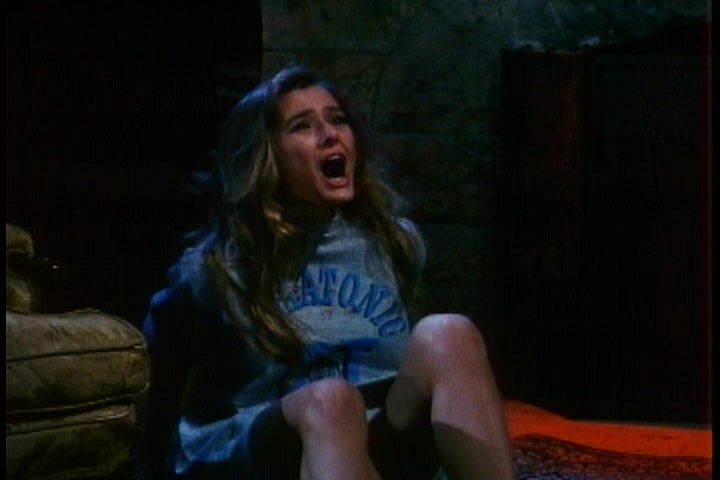 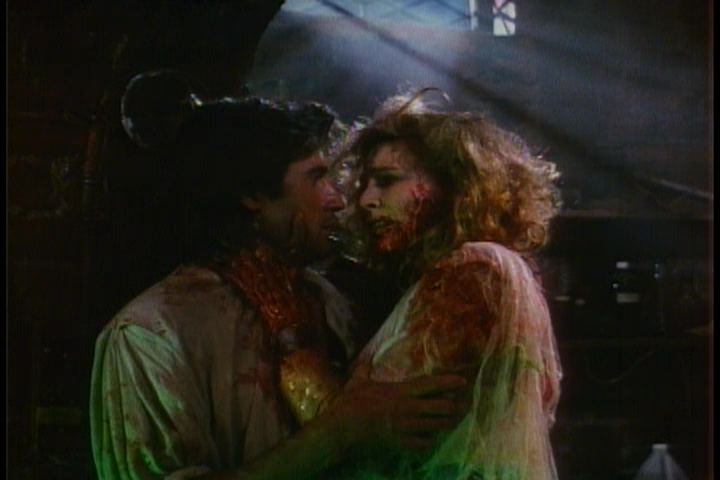