For years critics argued about the popular aueteur theory, which cites a strong director as the primary author of a film-- its true cinematic voice, as it were. Sure, directors like Truffaut, De Palma, Scorses, Chaplin, Welles, and Hitchcock are often used as proof, but then on the other side of the coin we have

Hopelessly dull Dan (Lance Fuller) and his clueless new bride, Laura (Charlotte Austin), arrive at hubby's sprawling estate where he keeps a pet gorilla, Spanky, who greets the new lady of the house by peeking up her skirt and pawing her dress. Naturally Dan responds by shooting the poor fellow dead. Soon Laura's having strange dreams involving rampant jungle stock footage and the worship of jungle gorillas, and through hypnosis, it turns out in a past life she was once a sapian queen. Dan's less than thrilled with the prospect of his wife being groped by someone else's hairy

While most monster movies of the period still remained coy by fading away as the damsel in distress was carried off, The Bride and the Beast no few attempts to disguise what's really on the frisky gorillas' minds. Unbelievably kinky for its vintage, this one probably slipped by the censors thanks the script's loopy distractions like hypnosis, jittery natives, and goofy costumes, all of which make the bestiality a bit more palatable for matinee audiences. While it took over two more decades for Humanoids from the Deep to finally show the monsters go all the way, Wood's script still packs a twisted wallop if you're really paying attention. And who would've thought Nagisa Oshima would remake this film, more or less, as Max Mon Amour decades later? 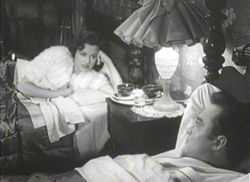 Retromedia's transfer appears to be lifted from an old one-inch master someone had lying around from the earlier video days; while the print itself is free from damage, resolution is soft and hazy for the most part with weak contrasts. It's still a doozy of a movie, though; until a glossy restoration comes along, this is at least a viewable option. The mono audio is a bit on the murky side, but at least you can make out the catchy jungle-lounge score by Les Baxter (which was later recycled and adapted on some of his albums). The disc comes with a handful of extras, including a spicier theatrical trailer (check out DVD Savant for an interesting theory on this one), a still gallery, and three godawful video shorts revolving around David "The Rock" Nelson: a video interview, "Mummy A.D.," and "The Man from Plan 9," all of them pretty worthless. The package is rounded out with "Beach Blanket Bloodbath," a rough clip from Retromedia maven Fred Olen Ray featuring Famous Monsters legend Forrest J. Ackerman.