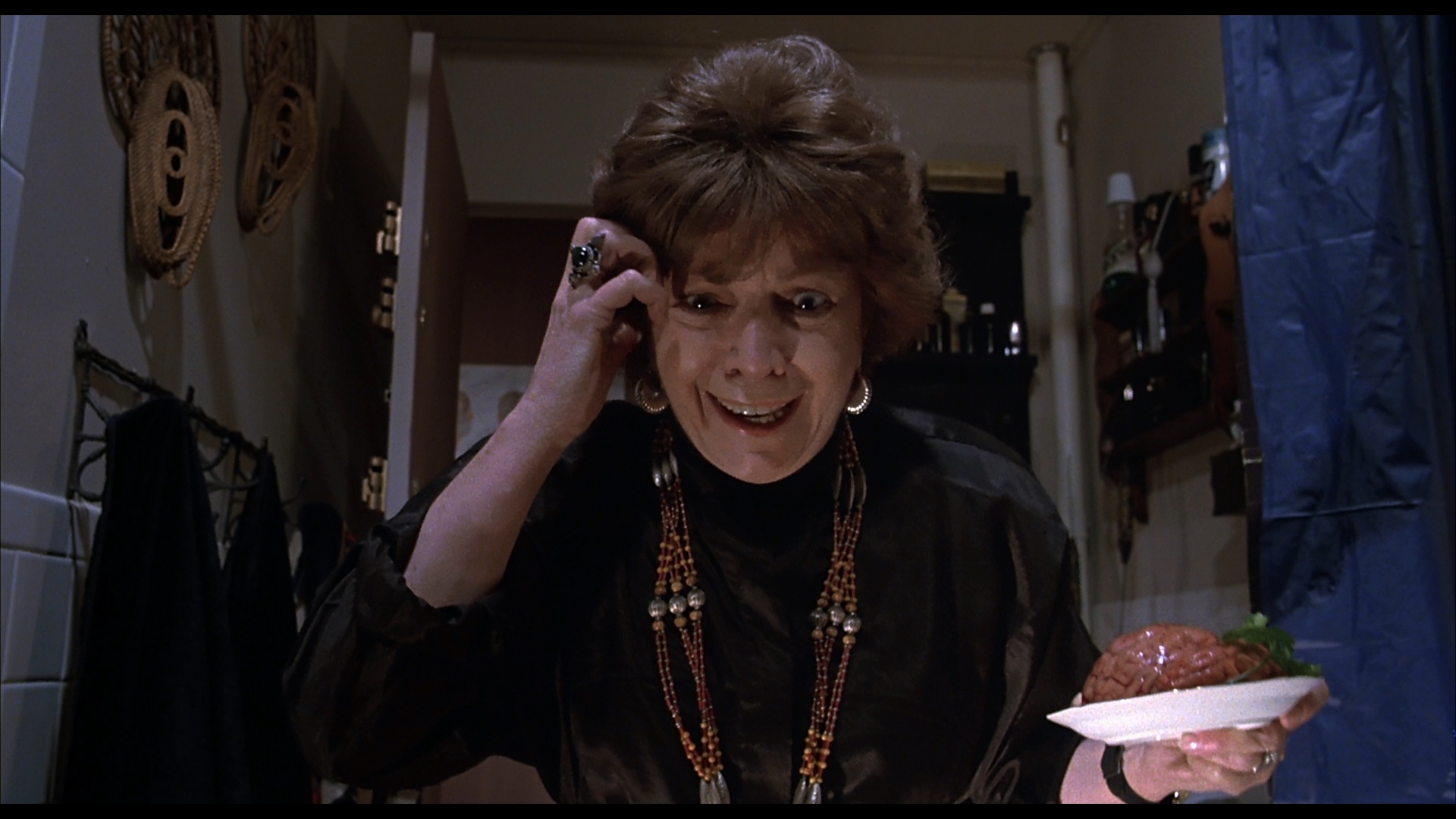 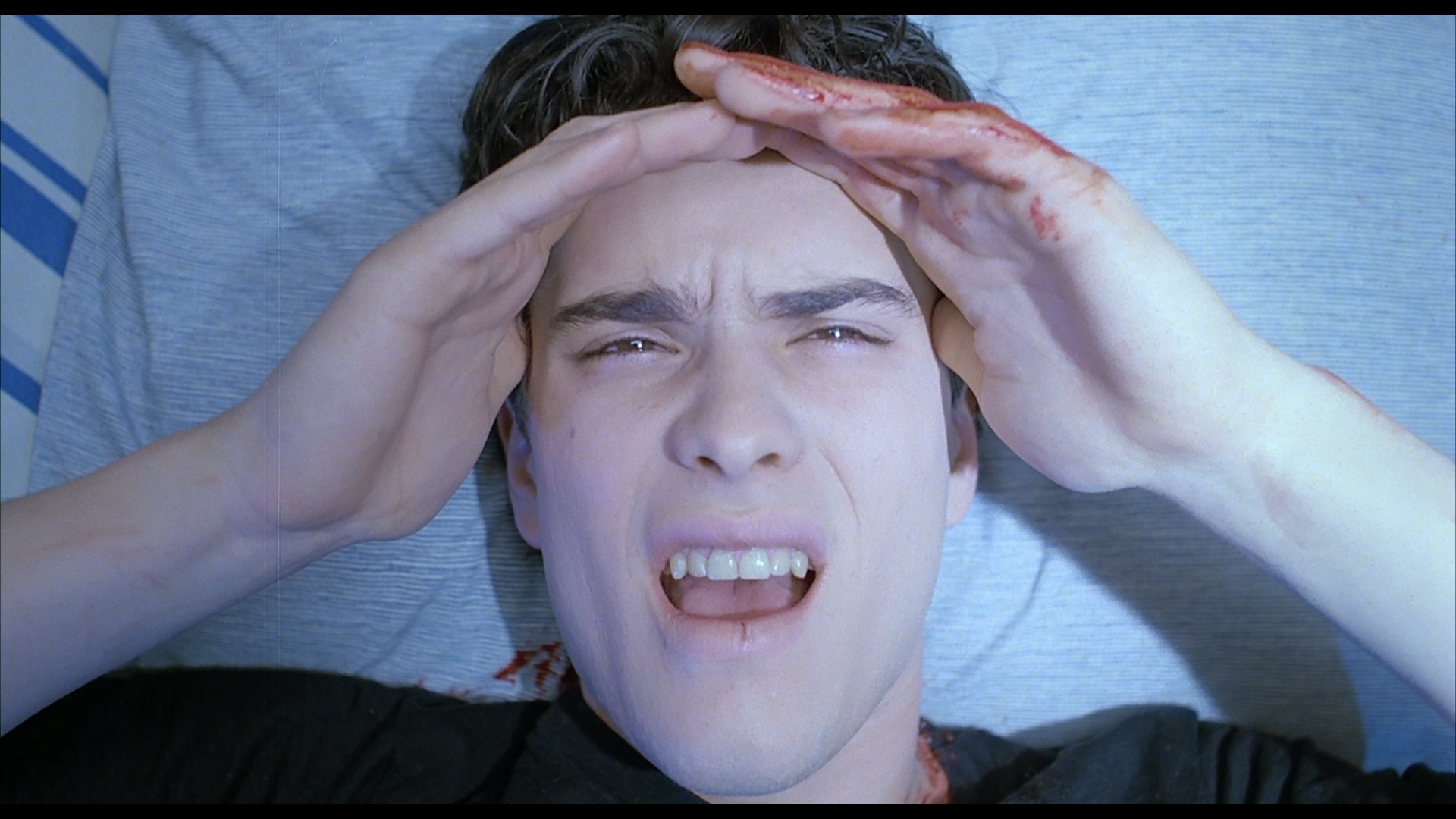 How do you follow up an all-time cult classic? Well, if that movie is 1982's Basket Case, you just take what worked in that film and try to make it even better. The result, of course, is Brain Damage, an outrageous little gem that ran into trouble when its distributor decided to release it with an R rating in the U.S. As a result, the film lost two of its most over-the-top sequences (one involving a club girl getting her brains literally boffed out, and the other featuring a nasty string of brain matter being pulled out of an ear). The watered-down version still managed to find an accepting cult audience, especially after its release on video from Paramount, while horror fans managed to track down uncut copies from around the world before the film finally appeared uncut around the turn of the millennium. Now its reputation has continued to escalate over time, earning it a firm place in the pantheon of '80s horror favorites.

Our tale opens as an elderly woman looks at her bathtub filled up with water and lets out a shriek. Her husband joins her as they frantically ransack their apartment, screaming "He's gone! He's gone!" Cut to their neighbor, Brian (Herbst, later Rick Herst on numerous soap operas), who shares an apartment with his brother, Mike (MacDonald, current partner of Holly Hunter). Brian wakes up with a strange headache and discovers a crusty, elongated creature lurking in his room. Even weirder, the creature talks and occasionally slips a needle-like appendage from its mouth into Brian's neck, whereby it injects the young man with a psychedelic chemical causing euphoric hallucinations. Brian goes out on a surreal nighttime walk 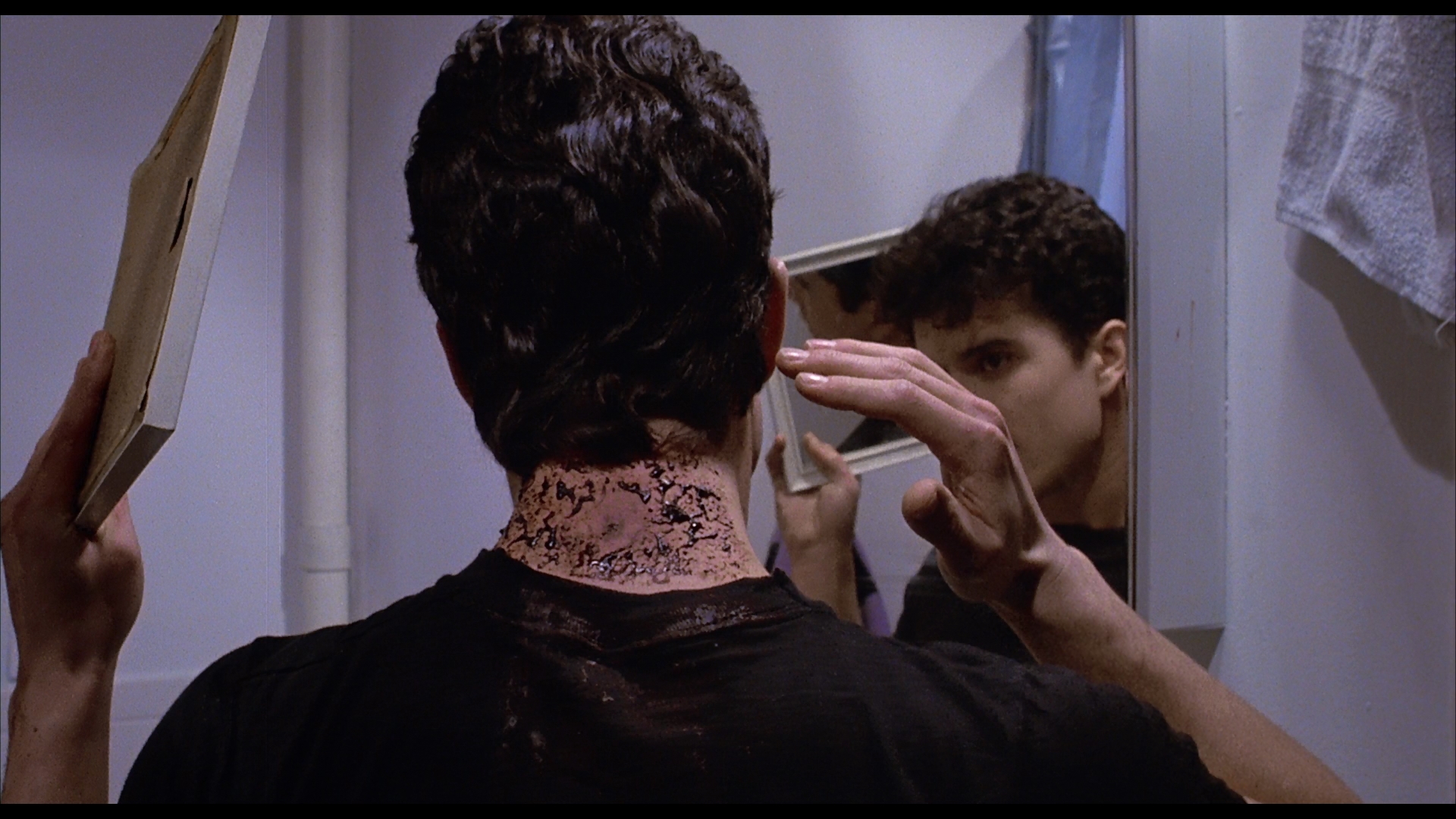 climaxing at a junkyard, where a run-in with a security guard results in the creature scarfing down the guard's brains. Unaware of his new friend's murderous tendencies, Brian 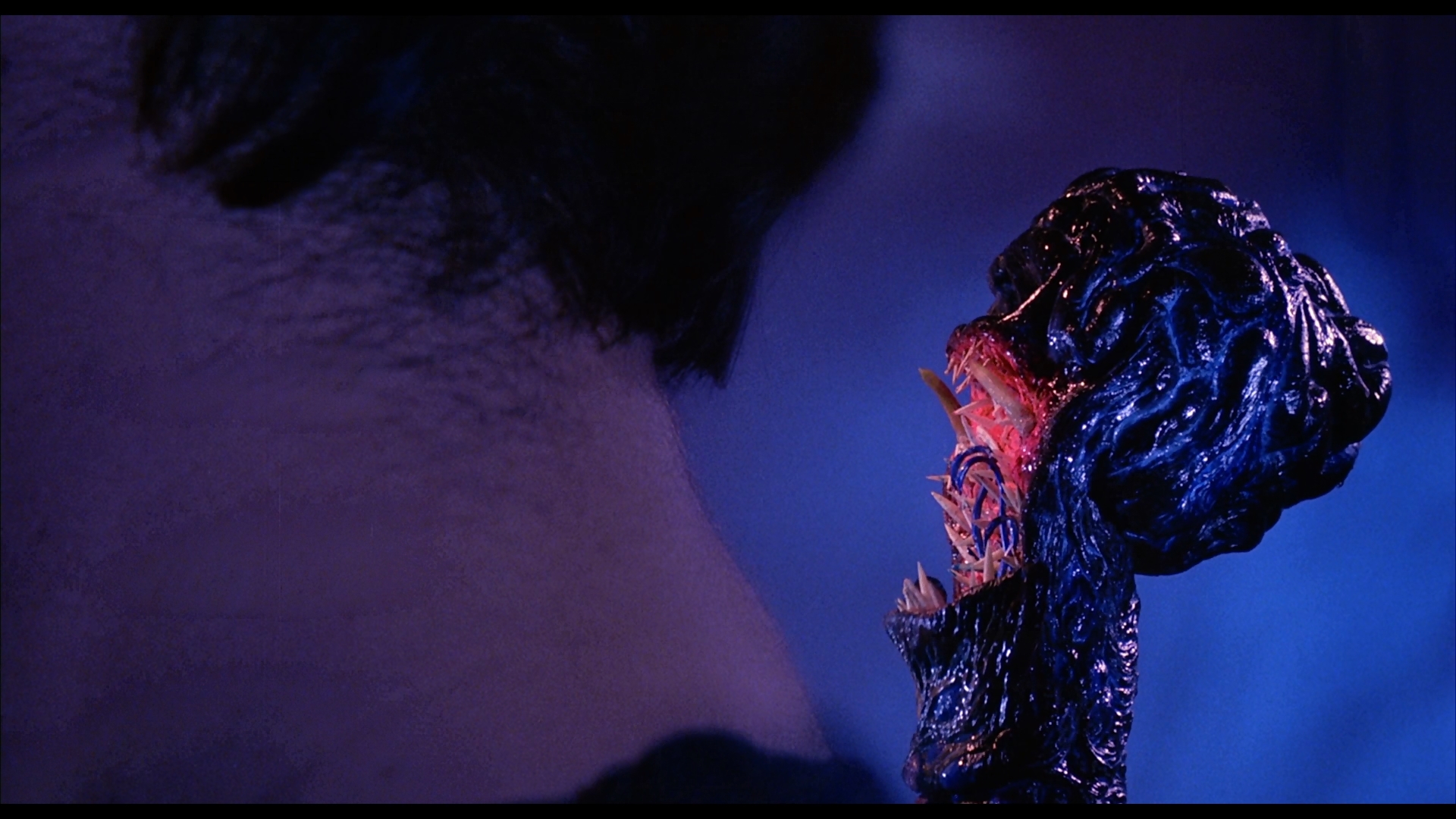 blithely ignores both his girlfriend Barbara (Lowry) and his brother in favor of spending hours in the bathtub splashing around with his fix-providing pal. After a few more grisly murders, Brian's neighbors eventually catch on and inform him about the history of this creature, called the Aylmer ("You named him Elmer?!"), which has been bought and traded over the centuries. Determined to hold on to his codependent prize, Brian refuses to hand over the Aylmer, resulting in gruesome and highly surreal consequences.

Surprisingly stylish for such a low budget ($600,000, according to the commentary), Brain Damage (originally conceived under the title Elmer the Parasite) knowingly winks at other genre titles like Altered States and even includes a very funny in-joke for Basket Case fans (look closely on the subway). While the basic narrative thread of the film will be familiar for anyone well-versed in other "horror as drug parable" titles like The Hunger, the real joy lies in Henenlotter's curious little detours along the way. The aforementioned nightclub scene remains a jaw-dropping bit of sick cinema 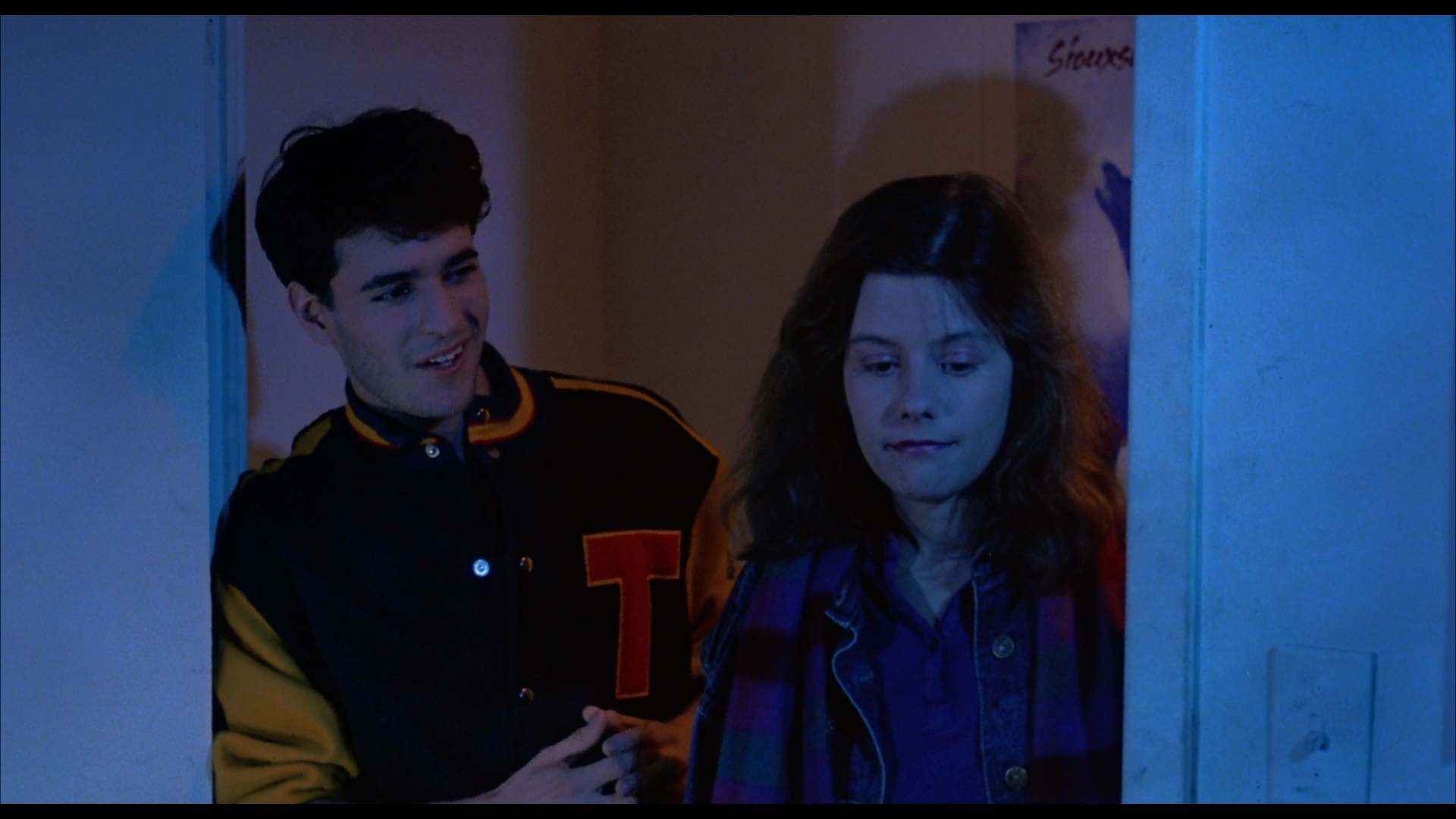 guaranteed to bring your next movie party to a dead halt, and the finale takes some unexpected turns away from the expected Basket Case-style wrap up. The performers generally do a nice job, with Herbst managed a nice balance between comical hysteria and genuine pathos. Though uncredited, Zacherley makes a definite impression as Elmer, droning out wisecracks and tormenting Brian with a Tommy Dorsey tune for good measure. Street Trash auteur Jim Muro handles Steadicam duties with his usual skill, and Elmer himself, giving Belial a run for his money, makes for a strangely endearing little critter. It's also loaded with the usual Henenlotter trademarks like vulnerable, dark-haired young male protagonists and perverse but gleeful sexual subtext (beyond that obvious club scene) including the most jaw-dropping public 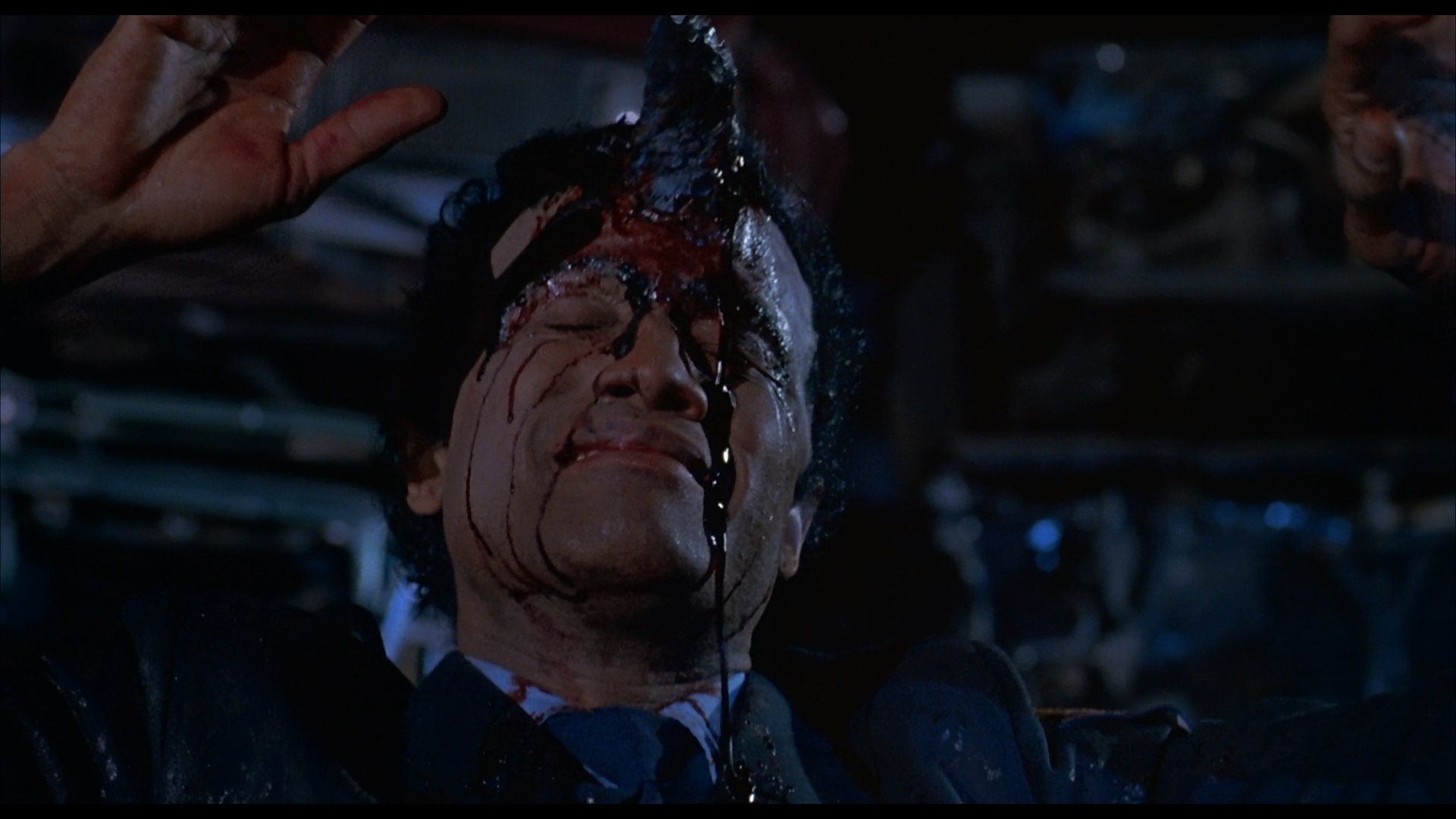 cruising scene in a horror film this side of A Nightmare on Elm Street 2: Freddy's Revenge.

Synapse's DVD release from 2000 turned out to be everything a horror fan could ask for in the format's infancy, featuring the U.S. trailer (and the Basket Case one tucked into Henenlotter's filmography for good measure), a beautiful letterboxed transfer (matting off unnecessary information from the full frame 35mm original), and even an isolated score track! The real treat, though, is the commentary by Henenlotter himself, joined by Bob Martin (who wrote the novelization) and Shatter Dead director Scooter McCrae. The three casually chat about the making of the film, swapping observations and anecdotes. When Synapse's rights expired, a stripped-down DVD appeared from Mackinac Media in 2006 and can easily be skipped entirely. 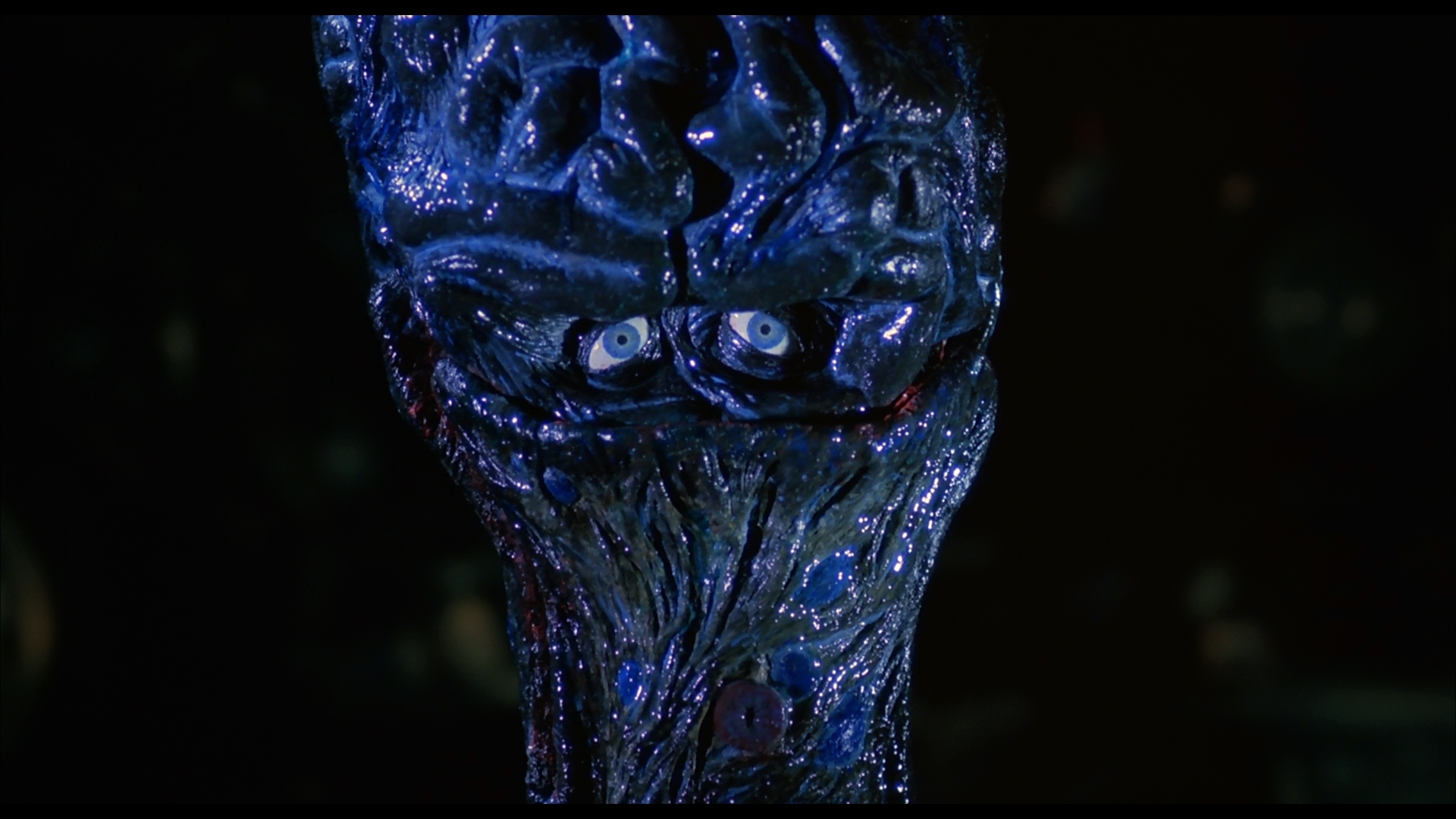 In 2017, Arrow finally brought the film to Blu-ray and DVD as a dual-format release in both the U.S. and U.K. that represents the film's strongest visual presentation to date. The intense blue and rose hues really pop here and the natural cinematic texture of the film appears to have been left intact, which means the inky blacks and gritty appearance of the night scenes still look wonderfully grimy. Audio is presented in either a bouncy 5.1 DTS-HD MA or LPCM English option (both sound great), with an LPCM option also present for an isolated score track. Optional English subtitles are included along with a brand new solo commentary from Henenlotter (with moderator Mike Hunchback), who's hilarious as always as he repurposes some of the past material and gives it a fresh spin as he bookeneds the track with stories about Zacherley and covers everything from the production design choices to the challenges of mounting a production about a willing parasite host and the color timing and makeup tricks to change 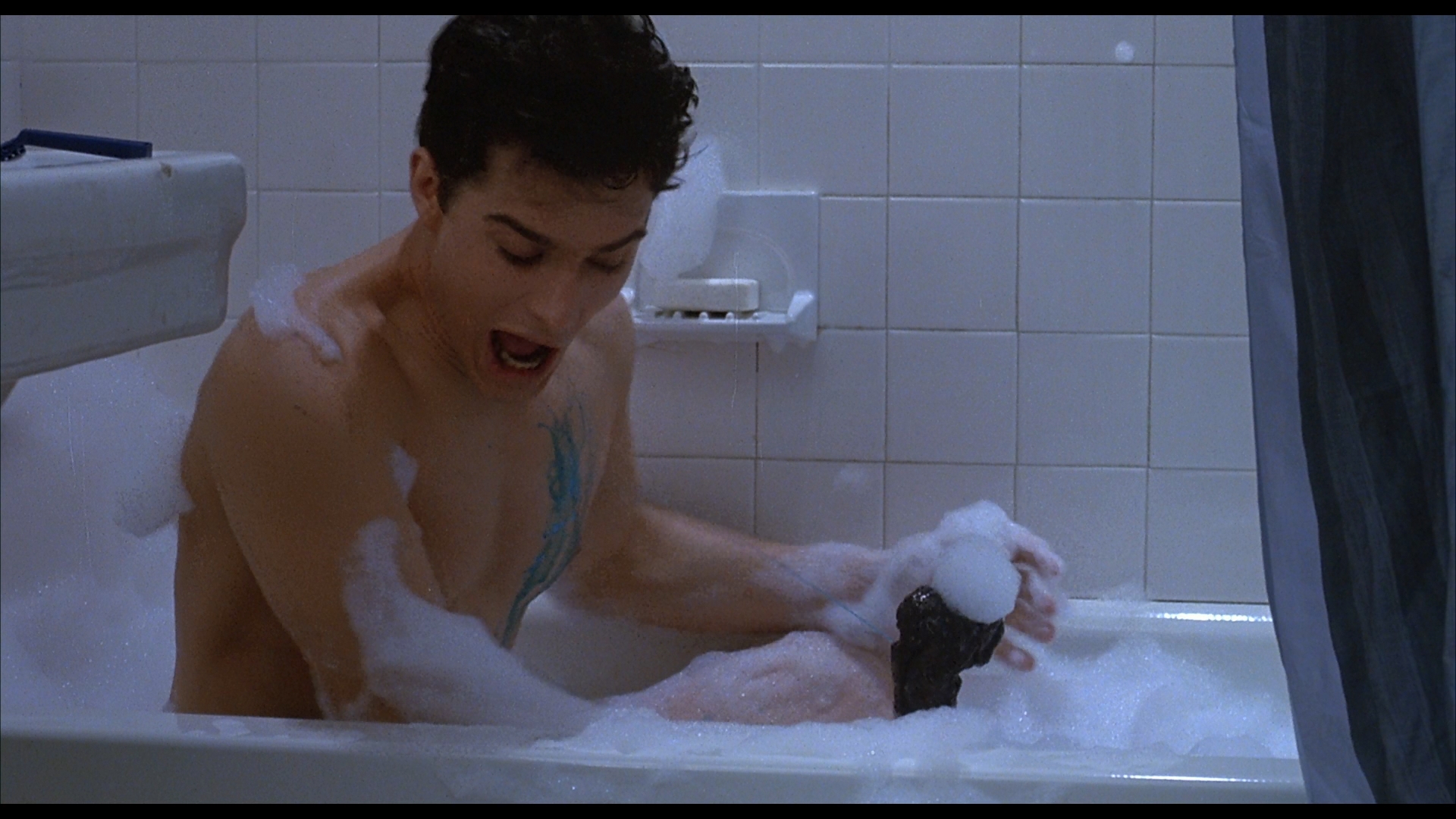 Herbst's appearance throughout the story. 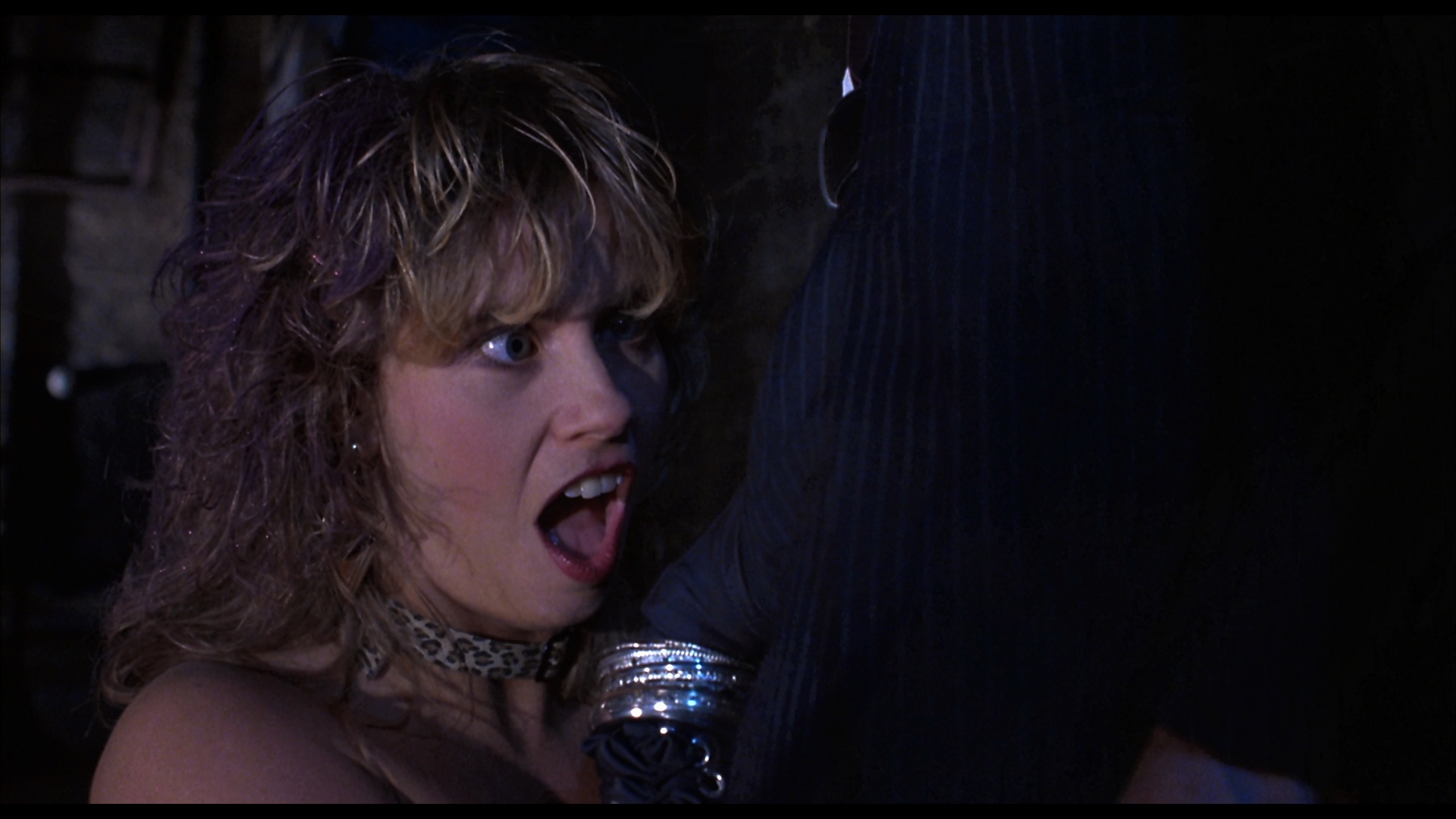 director Greg Lamberson, and makeup artist Dan Fry, with topics including the appeal of the original script, the reasons for that cut in Herbst's lip throughout the film, the use of calf brains for one key moment, and the often rough-and-tumble New York locations. A decent helping of VHS-shot making-of footage is laced throughout as well. A "Brain Damage Q&A with Frank Henenlotter" (20m36s) recorded at the 2016 Offscreen Film Festival covers some territory from the commentaries but adds a few new bits as well as he talks about bringing his take on the Faust story to life in New York, including a funny bit about the difference between shooting in 16mm and 35mm. In "The Effects of Brain Damage" (10m1s), Bartalos returns for a more in-depth look at how he came up with multiple Elmers for different functions and engineered the various head trauma effects, again studded with bits of behind-the-scenes coverage. Superfan Adam Skinner turns up for "Tasty Memories: A Brain Damage Obsession" (10m1s), showing off his extensive collection of ephemera including worldwide posters and video editions as well as oddities like a custom-made Pop! toy. Halfway through it also takes a fun right turn into how the film fueled his musical creativity as part of his band, The Statutory Apes, complete with a music video. Michael Gingold hosts a fun walk through the film's shooting locations with Henenlotter himself in "Elmer’s Turf" (8m49s), including the 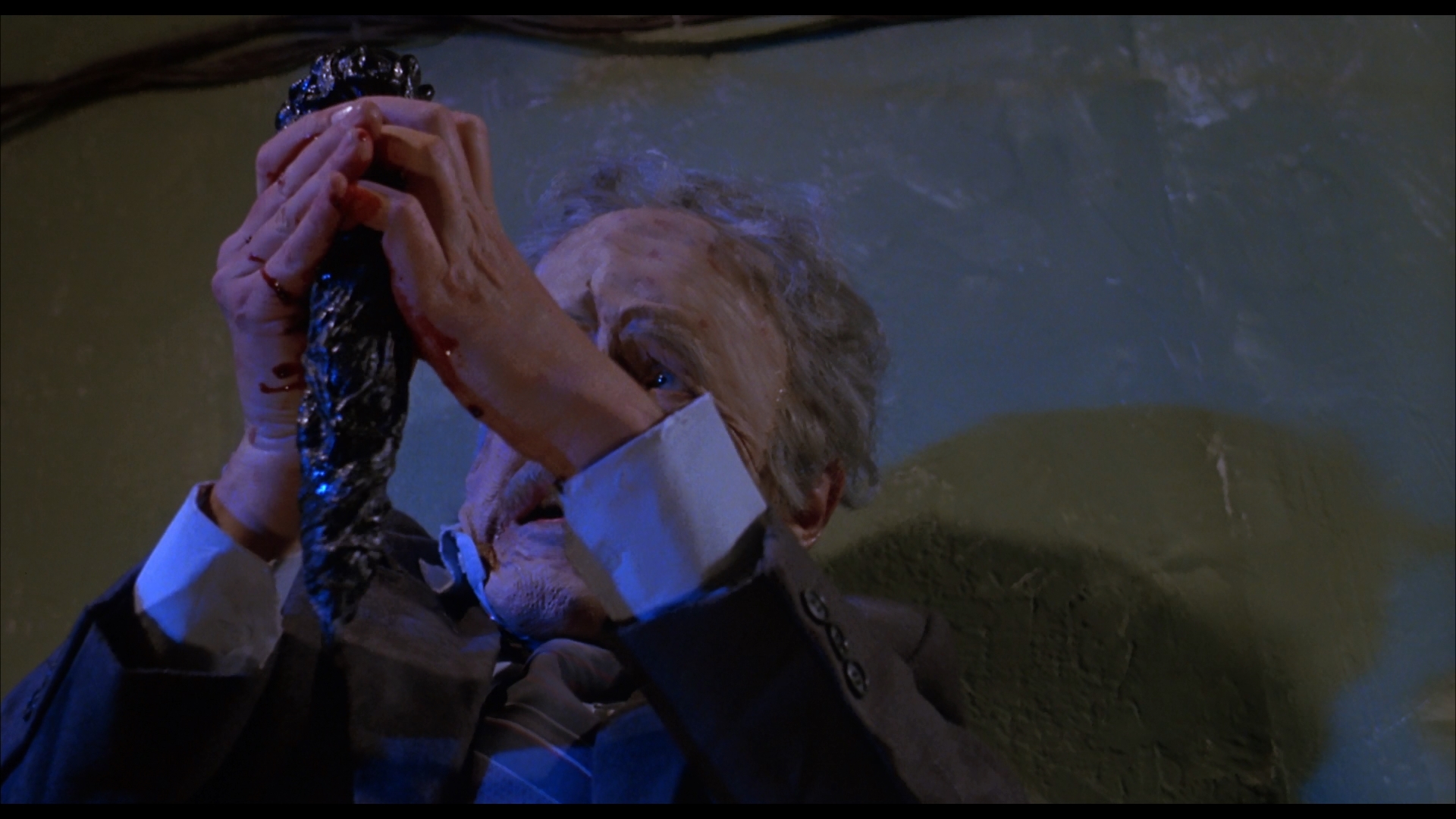 Boiler Room and Bea restaurant. In "Animating Elmer' (6m40s), Magliochetti recalls the sparing stop motion animation required for some of the trickier shots, such as Elmer's mouth pop on the subway, and shows off the flexible model he used for a few highlights. 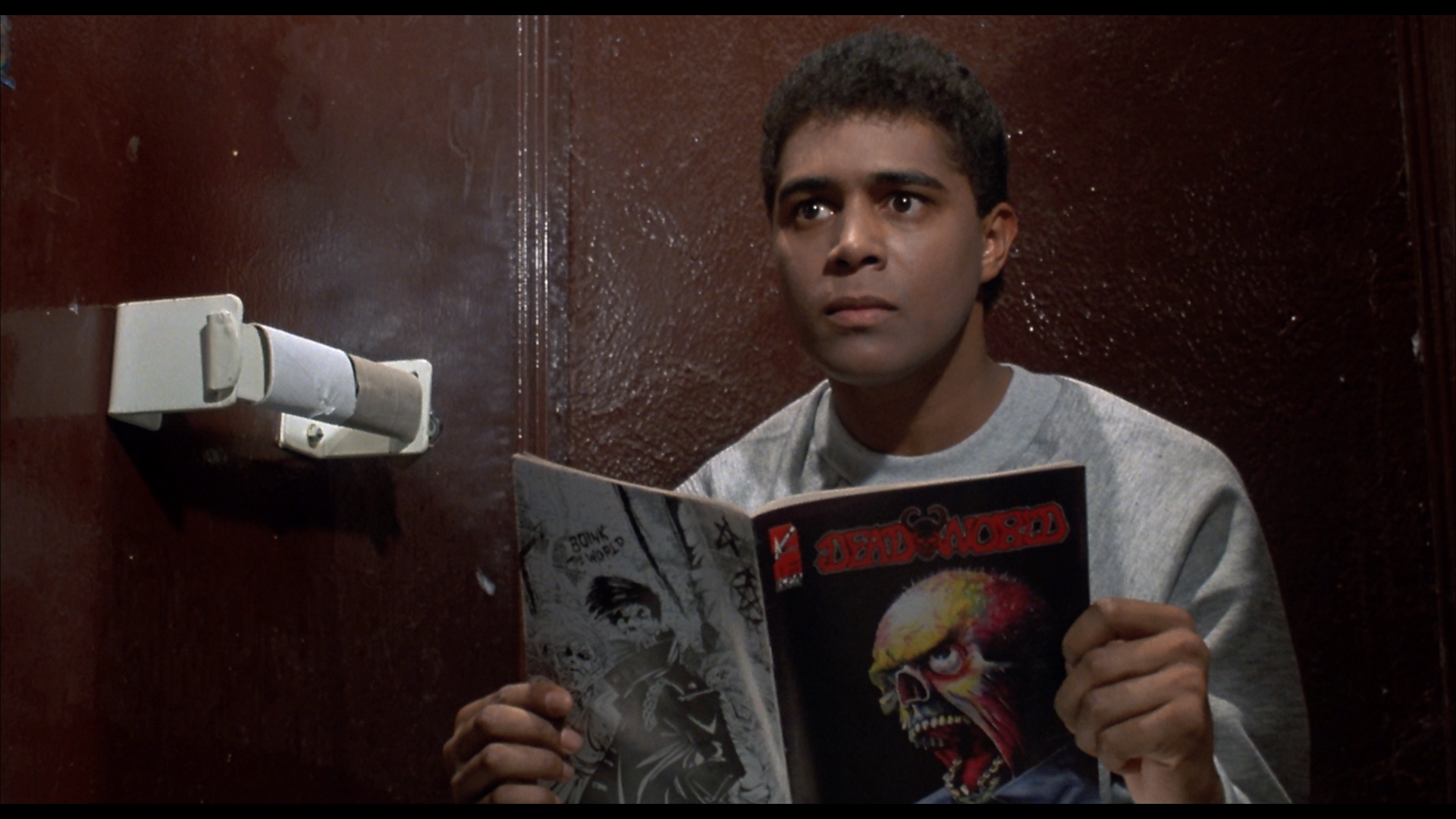 The bit about his subliminal spark messages is pretty great, too. The film's et photographer, script supervisor and assistant editor gets center stage with "Karen Ogle: A Look Back" (4m29s), which covers her diverse background and her multitasking on this film and her affection for Henenlotter, "the smartest and funniest guy I know." The utterly bizarre "Aylmer: The Brain, the Voice, the Worm" (3m40s) features a certain beloved little creature jamming out to a crazed music medley for a puppet show on a trash can, and three songs by The Statutory Apes' are tucked away as well. Finally Zacherley gets a tribute with his final credited film the animated short "Bygone Behemoth" (5m8s), a charming stop-motion short by Harry Chaskin about an aging dinosaur in a modern urban neighborhood. The theatrical trailer is included along with a gallery of B&W and color stills (4m18s), while the lavish packaging includes reversible sleeve options with the original poster or a new design by Sara Deck, an illustrated insert booklet with new liner notes by Gingold, and a limited edition O-card, while the edition sold by Diabolik (see the top of this page) also comes with an exclusive enamel Elmer pin badge to make all of your friends incredibly jealous of your great fashion sense.