Hiding under this generic title is one of the nastier British films from the post-Video Nasty era, the inaugural film from indie filmmaker Ray Brady, whose subsequent work like Love Life and Kiss Kiss Bang Bang is certainly quirky but not remotely as vicious. A sort of Jacobean revenge drama with all the motivation sapped out of it, this stripped-down torture tale begins with randy Tevin (Poole) hooking up for the evening with 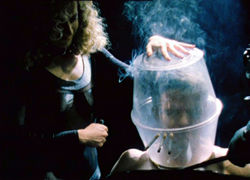 Anne Marie (Margot Steinberg), only for him to pass out watching porn films at her apartment before they can consummate their one-night tryst. Next thing he knows, he wakes up in his skivvies and tied to a dentist's chair, with Julia and her cohort, Julia (Sanderson), informing him that he's simply the latest in a line of men broken at the hands of these two women, who intend to undercut and destroy the male psyche and body with every blow captured on video. Gradually Tevin's considerable transgressions come to the surface under pressure, while the women subject him to an outlandish array of horrors involving a microwave, a cigarette chamber, maggots, and amateur surgery. 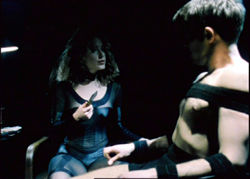 xplicit in the traditional sense, Boy Meets Girl doesn't even try to compete with entrail-laden geek shows like the Guinea Pig series. Instead the focus is more on a progressive sequence of psychological terrors, with the characters interacting in a series of complex debates about gender, violence and society as Tevin's physical and mental resources are trimmed away one by one. Despite the obviously limited budget, it's shot with all the elegant veneer of a Peter Greenaway film; the horrific, candlelit climax is almost seductive in its imagery but shattering in its implications. The snarky intertitles used to comment on the action come off like a twisted nod to Woody Allen, which would be appropriate under the circumstances, and the skillful manipulation of both film and video footage is handled 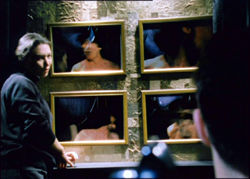 in a smooth, professional manner that sidesteps the gimmicky usually found in such exercises.

Not surprisingly, Boy Meets Girl was received with less than welcome arms by the British censors after its limited theatrical showings and was prohibited from a video release for years. The eventual DVD goes a long way to putting this film in context as a deliberate shot fired at the BBFC, with a number of acts (sexual assault, mutilation, etc.) specifically designed to confront the hard and fast rules concerning gender-related violence. In this respect Brady's feature-length commentary is an essential listen (after viewing the film normally, of course) as he proves to be an articulate, thoughtful guide through this moral minefield. Not surprisingly, the BBFC has caved in considerably since this film's release; this would make a perfect co-feature with the similar Audition, which was easily passed and became a critical darling. Video and audio quality on the DVD are adequate but obviously limited to the original source material, which is deliberately scrappy at times. Other extras include a still gallery and an interesting comparison between rehearsal footage and the finished product for a quartet of scenes.