The first big female wrestling film from Mexico is arguably the best, despite the cult popularity later heaped upon The Wrestling Women

vs. the Aztec Mummy (also directed by trash maestro Rene Cardona). In fact, the story worked so well that Cardona and his colleagues essentially remade it over and over again, most blatantly as the more explicit Night of the Bloody Apes. Watch both for a truly hazardous double feature.

The female wrestling community is shaken when the scientist sister of Gloria Venus (Lorena Velazquez) is abducted by a mad hooded scientist, whose brain experiments have produced a mad, ape-like creature named Gomar. Gloria and her colleague/friend, Golden Rubi (Elizabeth Campbell), decide to investigate and help their policemen boyfriends (including Armando Silvestre, later in Bloody Apes) uncover the dastardly conspiracy. What follows is a rapid-fire succession of confrontations between the rasslin' babes and the doctor's minions, including a near death torture chamber melee. Naturally the scientist proves to be far more indestructible than anyone anticipated, as he reappears in a new guise as a wrestling manager and unleashes yet another formidable, scientifically enhanced foe against our heroines. 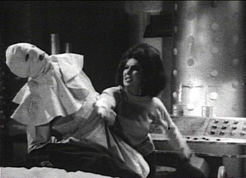 Originally entitled Las Luchadoras Contra el Médico Asesino, this film has been a drive-in and late night TV staple for years under a variety of titles. Most recently it turned up on VHS in a musically doctored form as Rock 'n' Roll Women vs. the Aztec Ape, though the original AIP version, Doctor of Doom, comes closest to the original dubbed glory intended by K. Gordon Murray. The film moves quickly and boasts a number of hilarious highlights, including an 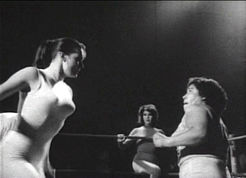 educational female wrestling demonstration that must be witnessed to be believed. On top of that you get voluptuous women, a midget wrestler, a gang of masked baddies, and the aforementioned flesh-eating ape monster. Then there's the outrageous climax, which is simply best experienced without any prior description to be properly appreciated.

The budget priced Beverly Wilshire DVD contains a somewhat scratchy but passable TV print, which looks pretty similar to the soft presentations broadcast for years. In lieu of a full scale restoration someday, this version will do just fine and makes for a passable introduction. The quality actually gets better as it goes along, with the scratches and dirt minimizing more and more with each reel. Obviously penned quickly by someone who knew nothing about the film, the liner notes on the back are exceptionally bizarre: "Life is so short. No wonder there are individuals that try and find ways to extend it. But what makes a perfect candidate to recieve this gift? Is it really a gift... or a curse? Could the one who tries by the real doctor of death? [sic] The real question is... who really wants to live forever?" Yes indeedy!

If you can stand the gore, this is probably the funniest of the many sleaze epics generated over the years by Rene Cardona, the man behind such 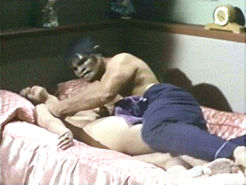 delicious anti-classics as Doctor of Doom and Santa Claus. Apparently determined to take advantage of the increasing lenience of the censors during the late '60s, he piles on the exploitation here with unbridled glee, tossing in topless women, gory real life open heart surgery footage, a mad doctor, wrestling women, and a shirtless muscleman with an ape mask running around attacking innocent women. What's not to love?

The plot is more or less a retread of Doctor of Doom with the silliness notched up even higher. We begin with an extended 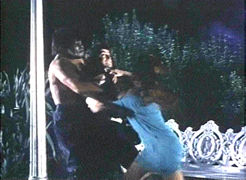 she-wrestling match between Lucy (Norma Lazareno, in a red satin kitty-demon suit) and a Santo look-alike, which culminates in a violent move that sends Lucy scurrying for a more appropriate day job. Her boyfriend (Carlos Lopez Moctezuma), a policeman, is soon occupied by a string of gory murders committed by a strange ape-man. This monstrosity has resulted from the efforts of Dr. Krallman (Jose Elias Moreno), a well-meaning physician who tries to reverse the effects of his son's leukemia by giving him the heart of an ape (in graphic detail). Naturally the son quickly turns simian, and the local women walking alone at night have much to fear...

While Night of the Bloody Apes (La Horripilante Bestia Humana) would be compelling enough based on the sheer lunacy of its premise, Cardona apparently decided to spice it up with some extra gore footage to go along with the cheesecake nudity. Apart from the aforementioned heart transplant, the killings all contain gruesome close ups of characters being dismembered, skinned, or otherwise abused, all rendered in loving color. If H.G. Lewis had made a wrestling/killer monkey man movie, it would have probably looked a lot like this. The crazy dubbing just adds to the fun, as characters spout nonsensical observations right and left, turning the story into a maddening jumble.

The Beverly Wilshire DVD of Night of the Bloody Apes looks about the same as MPI/Gorgon's long unavailable VHS version, with which it shares the same memorable, trashy cover art. The image is way too soft for DVD but still watchable, while the faded colors offer only an approximation of the vivid hues originally captured by the film's gaudy cinematography. The mono audio is perfectly clear if unexceptional, capturing every nuance of that giddy canned dialogue.