Imagine one of those loopy German schoolgirl report movies smashed together with one of Harry Novak's "sexy horrors" like The Toy Box... well, that might put you in spitting distance of Bizarre, a nutty oddity unleashed by producer Richard Gordon, most widely under the misleadingly innocuous title Secrets of Sex. After a puzzling, Milton-quoting prologue involving 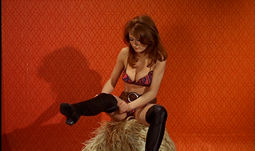 three naked bodies in the hay, we're introduced to our narrator, a mummy standing in a dark room, who explains that we're about to bear witness to the conflict between man and woman which has played out over the centuries. Naturally this is illustrated by a batch of young women stripping down to their undies, then even less, before they're pelted with what appears to be overripe produce and held at gunpoint by a bunch of shirtless guys in jeans. After that the viewer is assaulted with a series of vignettes - some narrative, some not - in which men and women fight for dominance. A male model is hoisted up for a bondage shoot by a female shutterbug and left hanging for lunch with grisly results; a scientist decides he wants to broaden a young woman's horizons by introducing iguanas into the equation; a scantily clad cat burglar is caught by her married male prey and indulges in some shower shenanigans; an elderly woman traps the souls of lovers as plants in her greenhouse and shows them off to her disbelieving butler; 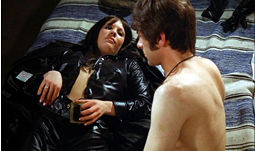 and the saucy British comic strip "Lindy Leigh" comes to life as a series of animated panels involving sexy spies. Though barely connected to each other, these various segments certainly do result in living up to the film's title/.

Conspicuously absent on the home video market, Bizarre made the horror and softcore sex theater rounds for nearly a decade before vanishing into the exploitation ether, only to resurface to prove that, yes, such a film does indeed exist. Obviously the attention-grabbing gimmick of the mummy narrator will grab any viewer's attention first, but the whole film has an off-kilter atmosphere that makes it weirdly compelling; not only do you never have any idea where each story will go, but often the next shot in every sequence comes as a surprise. Coherent it ain't, but you won't be bored. Aside from one snippet of the burglar sequence seemingly culled from a different print (featuring some startling split-crotch nudity and borderline hardcore manual penetration), the sexual content is pretty much in keeping with the period: lots of bouncing breasts, with a few 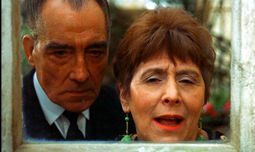 naughtier bits flashed here and there to keep the audience happy. (Pointless trivia note: some memorable dialogue from this film also pops up on a TV during the opening credits of Radley Metzger's Naked Came the Stranger). Apparently Gordon and Balch were happy enough with the results, as they reteamed four years later for the far more famous and more widely screened Horror Hospital.

Considering the rarity of this film, Synapse's DVD is quite a surprise indeed. Apart from the aforementioned insert, the element is in exceptional condition with vibrant colors straight out of an acid trip. The packaging inexplicably makes no mention of it, but the film is indeed anamorphically enhanced. If you're eager to learn exactly how this film came to be, don't miss the audio commentary with regular chat-mates Gordon and Tom Weaver, who efficiently sketch out the British filmmaking scene of the late '60s and the various players involved. Also included is an interview with the film's writer, Elliott Stein, who did double duty as the mummy... well, part of the mummy, as you'll discover. Also included is the theatrical trailer (under the Secrets of Sex title), compulsively readable and often hilarious liner notes by Chris Poggiali. Ah, but that's not all; you also get two experimental Balch short films featuring everybody's favorite William Tell-imitating author, William S. Burroughs, in "The Cut Ups" and "Towers Open Fire." Neither can really be described in any kind of rational sense but, as typical head trip pieces from the late '60s go, fit in perfectly with the random conceit of the main feature itself.