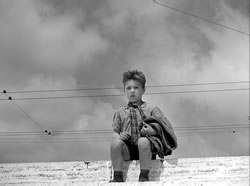 Regarded almost universally as the pinnacle of Italian neorealism, Bicycle Thieves made a major international name out of its director, Vittorio De Sica, who was primarily known for Shoeshine and The Children Are Watching Us. Though the rest of his career was erratic at times, he proved he still had a few more gems still inside him including the still undervalued Umberto D., several of Sophia Loren's better films like Two Women and Sunflower, and his final late-period masterpiece, The Garden of the Finzi-Continis. However, this is the one for which he will always be best remembered, and with good reason. Known in America as The Bicycle Thief until its more accurate, albeit less catchy, translation from the Italian title (Ladri di biciclette), became imposed in the last decade, this is the simple story of Antonio (Maggiorani), a poor postwar inhabitant of Rome who gets a menial job plastering posters around the city on his bicycle. When his only means of transportation is stolen, he sets out with his young son (Staiola) to track down the thief. Along they way they encounter a realistic array of people trying to get back on their feet in the aftermath of the war, where moral absolutes have no place in day-to-day life. 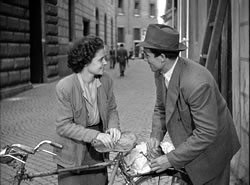 Shot on the city streets with entirely non-professional actors, Bicycle Thieves is definitely a powerful social statement, though even viewers unaware of its entire historical context can still enjoy it as one of the most moving films about a father and son ever made. Its multiple levels of impact made it an instant worldwide hit and a significant breakthrough for Italian cinema, earning a special Academy Award (as only special ones were given out on occasion before a permanent Foreign Language Film category was established). Like many other major foreign films of the '40s and '50s (including several Bergman and Fellini titles), it was released independently and presumed to fall into public domain when the US rights holder dissolved. Even as the film's reputation continued to soar with the film school wave of the '70s, it was mostly seen in tattered, dupey-looking prints and terrible video transfers well into the '90s. Image eventually released it on laserdisc and then DVD in the late '90s, but this wasn't a significant improvement by any means even if the material licensed from Corinth was the best available at the time. Criterion's double-disc DVD release in 2002 (the one that introduced the Bicycle Thieves title to the US) was a huge improvement with a solid restoration job that made the film much easier to appreciate in every aspect. Extra on the Criterion 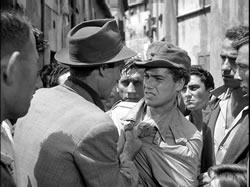 include a 22-minute video featurette, "Working with De Sica" (featuring Staiola, screenwriter Suso Cecchi D'Amico, and film scholar Callisto Cosulich), Mark Shiel's 39-minute TV overview of neorealism called "Life as It Is," and a 55-minute doc with Cesare Zavattini about his work with De Sica and the Italian neorealist formation after World War II.

Though Criterion has no announced plans to date for a Blu-Ray release, Arrow Films beat them to the punch with a shockingly good-looking HD presentation, albeit Region B encoded, which advances significantly over their UK DVD edition. Some very minor grain reduction may have been done here, but it's a robust, detailed transfer that shows off the details of fabric, city streets, smoke, and architectural details with a clarity you won't see in most of the prints floating around out there. Interestingly, as DVD Beaver has pointed out, the Criterion appears to have a very slight squeeze to the image which gives the actors a slightly skinnier appearance; it's not immediately noticeable to the casual eye, but to these eyes, the Blu-Ray looks better in terms of proportions. The Italian dialogue track is presented lossess (with optional English subtitles) and still sounds limited by the recording methods of the actual film, but it's about the best it could sound. (The Criterion also tosses in the original English dub track, but you won't miss it here.) Robert Gordon, author of the BFI's book on the film, contributes a feature-length audio commentary in which he covers how De Sica selected some of the more memorable performers and the surprising story of the film's road to production (including the possible involvement of David O. Selznick, with whom De Sica would later work on the notoriously troubled Indiscretion of an American Wife). The Zavattini documentary is carried over here, while other new extras include "Timeless Cinema," a 56-minute overview of De Sica's career (with a heavy emphasis on the first half of his career, not surprisingly, and not much attention on his truly bizarre acting career), the original (long) trailer, and a liner notes booklet including some archival comments from Zavattini.