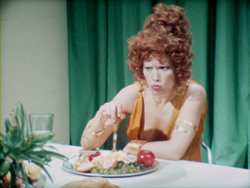 One of the more 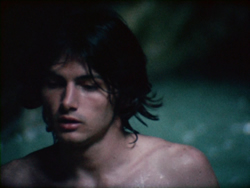 As Poole himself explained on more than one occasion, he intended to tackle three stories from the Old Testament with legendary female characters at the center who had been defamed by centuries of religious teachings. It's a fascinating idea that doesn't really cohere completely until the last story, but first we get the familiar narrative of Adam (White) being created as the first human on earth. The visual expression of that idea here is a wonderfully creative one as he's born naked from a rocky crevice in the earth and swims through a cavern into a beach, experiencing sunlight and air for the first time. Then Eve (Couselle) emerges from the sea, and the ongoing saga of human love and sexuality is born. Interestingly, many of the visuals here would go on to reappear in Piero Paolo Pasolini's Arabian Nights and Derek Jarman's Sebastiane, a link you wouldn't normally expect to see. It's also notable as a rare starring role for White, a stage actor who appeared in the drive-film Blue Summer the same year and would go on to star in the groundbreaking gay drama, A Very Natural Thing.

Next the film takes a surprising detour into knockabout comedy with the story of Bathsheba (Spelvin), who cuckolds her husband Uriah (Benes) with her lover and subsequent spouse, David (Flammel). This episode starts as a farcical dinner and turns into a mad domestic romp, with Spelvin stealing the show as she gradually sheds her clothes and goes a goofy strip routine that forms a memorable centerpiece for the film as a whole. 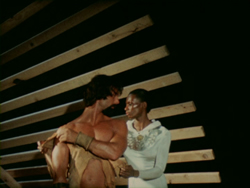 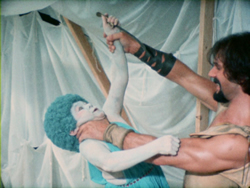 However, Poole saves his finest moment for last with the third story, a radical reinterpretation of Samson (van Zetten) and Delilah (Grant) with the famous strongman portrayed as a tribal bully who murders one of Delilah's midget servants. What follows is a striking, hallucinatory rendering of the famous seduction and hair cutting, a visually bold standalone sequence that's as beautiful as anything you'll see in a '70s indie film.

A film that couldn't have been made at any other point in time, Bible! was ostensibly a bid for an R-rated, semi-mainstream release for Poole, a primary force in establishing explicit gay cinema with Boys in the Sand and Bijou at the start of the decade. True to its intentions, the film isn't even really classifiable as softcore as the actual sexual content is fairly low (with Adam and Eve getting the only really significant love scene, which is essential to the story of course). Instead it's a celebration of both the human body and the sensual power of cinema itself, lingering on textures and colors with almost fetishistic detail and giving the actors the chance to deliver entirely physical performances freed from a single word of dialogue. Instead the soundtrack is occupied with classical music, which explains why Poole has also nodded to this as an homage to Disney's Fantasia (as well as silent films, presumably Intolerance in particular).

A victim of the apparent jinx that seems to befall any film mixing the erotic and the biblical (see also: the Mitchell Brothers' Sodom and Gomorrah), Bible! never received a home video release in any format until its 2013 DVD from Vinegar Syndrome. This will mark the first chance several generations will have to see the film, and it's aged very gracefully indeed. Poetic and haunting, it's a major revelation if you know what you're getting into. (The one quibble is the goofy anachronistic tag at the end of the film, but that's easily forgiven since it's also attached to a really crazy rendition of the immaculate conception.) The transfer from the original 16mm negative looks terrific, not surprisingly, and the mono audio ably handles the music-heavy soundtrack. 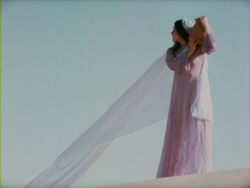 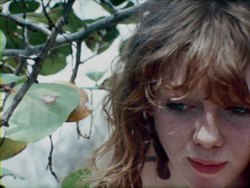 Poole is also on hand to provide a quick video intro to the film as well as an audio commentary in which he focuses almost entirely on the production aspects of the film. He refers to some of the classical influences (including Michelangelo's sculptures) and covers the creation of period props ranging from knife belts to ancient cloths, though perhaps the most interesting anecdote concerns his method of shooting at a slightly higher frame rate than normal to give the actors' movements a dreamlike quality they attempted unsuccessfully to replicate on the set. He also appears in a vintage 1977 cable access TV appearance (on a couch next to Casey Donovan) on the gay-themed Frank O'Dowd show The Emerald City to talk about the film, offering an earlier take on the same material. Then two of the women get their turn with new interviews, with Spelvin getting 11 minutes to give a thumbnail sketch of her segue from underground political films and the Pickle Factory to the hardcore masterpiece Devil in Miss Jones. She's charming as always and has very warm memories of making this film in particular, a sentiment also shared in the next interview with Grant in her own six-minute featurette. Weirdly, Grant (who got this role while working as a waitress frequented by Poole and Peter Fisk) went on to win a daytime Emmy for her soap opera work after going into cosmetology, which presumably didn't involve the symbolic emasculation of musclemen. She also reveals that she didn't get along too well with van Zetten, which added some valuable tension to their roles. Great stuff. Also included are 12 minutes of actor screen tests (the five leads both in and out of costume), 12 minutes of raw costume test footage, five minutes of set and effects tests (mostly for the opening creation sequence), an extensive gallery of production and promotional stills, and the three-minute theatrical trailer (which credits the film under the preliminary title of In the Beginning...). Very highly recommended. The same package (extras included) is also available as part of a limited three-disc Wakefield Poole Blu-ray set from Gorilla Factory.