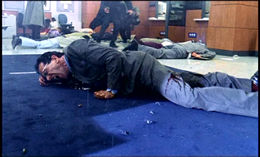 the camera for five years in 1994 following the release of his finest film, Dellamorte Dellamore, due to family matters. Once he returned, the virtually dissolved Italian genre market forced him to turn to a string of television projects instead. Fortunately that fate isn't quite as dire as one might fear, if the flashy actioner Uno Bianca is any indication.

Inspired by a brutal crime spree in Italy in the early 1990s (and documented in the acknowledged source book, Marco Melega's Baglioni and Costanza), this two-part film begins with ethical cop Valerio (Rossi Stuart) eyeing a sailboat near a harbor while a nearby bank is viciously robbed by a gang clad in black-and-white masks. Showing no conmpunction about shooting their victims for the pettiest of reasons, they are only identified by their getaway car, a white Fiat Uno. Valerio arrives at the scene following a devastating explosion and is assigned to the case with his partner, Rocco (Abbrescia). Soon the "White Uno" gang is terrorizing the region with a string of robberies, attacking grocery stores and gas stations without leaving any clues... and even killing the 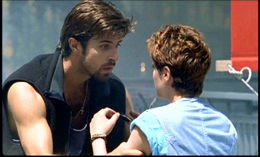 officers' superior in the process. With the body count rising, the two policemen chart out the criminals' methods and come to the realization that their prey might consist of other officers, and the law might have to be bent and even broken in order to capture them.

Though mostly shot in broad daylight and clearly constrained by a TV budget, Uno Bianca impressively overcomes its limitations thanks to an intense, committed performance by Rossi Stuart (one of Europe's finest younger actors and son of Giacomo Rossi Stuart, star of Kill, Baby, Kill!) and Soavi's astonishing visual panache. The opening ten minutes alone is a marvel of visual storytelling, constrasting the glaring white of the sun overhead seen through Velrio's upheld thumb with the bleached-out color schemes of the simultaneous robbery. Soavi keeps the camera fluid throughout most of the film (an impressive feat for a three-hours-plus miniseries!) while keeping a tight control on the narrative, which wasn't always his strongest suit in the past. He also closes the second half with a wry little camera shot that should provoke a smile from Dellamorte Dellamore fans.

This highly unlikely candidate for an English-language DVD release has fortunately been rescued by NoShame, with a very pleasing and sharp transfer to boot. Its TV origins (with final assembly and credits done on video, assuming it follows the usual pattern of European TV) prevent the possibility of an anamorphic transfer, but the picture is still solid throughout. The optional 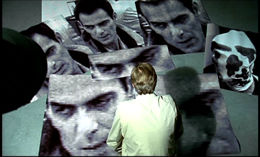 English subtitles tend to cut beneath the bottom black bar, so 16x9 owners won't be able to zoom in and fill the screen unless they speak fluent Italian. The two-channel Italian soundtrack features a few flashy split-channel effects here and there during the action scenes, but don't exepct demo material. The extras here deliver everything you could want to know about the film, including an intro and video interview ("We Did It like Cinema") with producer Pietro Valsecchi, a very entertaining interview ("How To Get Action into Truth") with writer Luigi Montefiori (better known as actor "George Eastman" from The Grim Reaper and Rabid Dogs), and a third interview ("It Was Not Business as Usual") with cinematographer Gianni Mammolotti (who also shot Soavi's Francesco). These interviews are featured on the first disc, which houses the first half of the film, while the second disc also includes two short (3 and 7 minutes) behind-the-scenes featurettes, which feature plenty of footage from the action scenes as well as quick chats with Soavi and Rossi Stuart. Other extras include a still gallery and a thick booklet, which contains a survey of the true story (by Sergio Mazzaro) and very thorough bios of Soavi, Rossi Stuart, Abbrescia, and Montefiori by Richard Harland Smith. Oh, and you also get an insert featuring a nifty punch-out "Make Your Own White Fiat Uno," which you can fold into a little cardboard car and use to stage hold-ups with your household pets.