Those naughty, naughty nuns! After irritating several nations' worth of censors and clergy with films like The Beast and Immoral Tales, it was only natural for Polish-born provocateur Walerian Borowczyk to eventually turn his eye to the nunsploitation sweeping Europe. While his past work had been based out of France, this particular title was his first to be cast and filmed in Italy. Of course, this was only appropriate given the fact that Italy was ground zero for the decadent nun craze, which they continued to exploit well into the early '80s. Not surprisingly, Behind Convent Walls turned out a bit different compared to your average sleaze title with a hefty dose of cinematic artistry to go along with all the naked sisters of the cloth.

Arguably the most plotless of all his films, Behind Convent Walls is basically a fragmented look at the disastrous consequences when a mother superior, Sister Flavia (Keoma's Giacobbe), attempts to control the carnal impulses of the nuns under her. From naked music lessons to hidden pregnancies, it seems all the sisters have something to hide, and even Flavia's niece, Clara (Branice), finds it difficult to control herself even when she agrees with her aunt's policies which, at their most extreme, involve head shaving and other forms of corporal punishment. However, when the sisters finally strike back, the plan goes too far and instigates payback from the church itself.

Despite the title and the consistent parade of exposed skin, Behind Convent Walls spends very little of its running time concerned with the nuns actually doing anything blatantly sinful. A couple of darkly shot softcore gropes are included, of course, and there's a showstopping scene involving a very blasphemous wooden self-pleasure device that's considerably more explicit than most audiences expected at the time. However, Borowczyk is more concerned with the playful eroticism bubbling beneath the women's habits that manifests itself in unexpected ways, as when gorgeous Marina Pierro (who went on to become the director's muse in several films after this) inflicts stigmata on herself with a bouquet of roses affixed to a crucifix. Apart from Pierro, the cast consists of several familiar faces from Italian exploitation including Howard Ross (New York Ripper) as a potential fox in the henhouse and a typically exhibitionistic turn provided by Olivia Pascal, star of Vanessa and Bloody Moon. 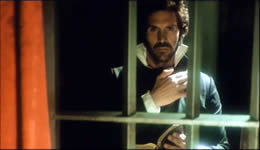 While most prints and VHS editions of Behind Convent Walls were censored to varying degrees (and almost always cut out the aforementioned wooden dildo scene that would've made Ken Russell proud), all DVDs have been intact, even in the UK version from Nouveaux. However, the real winner of the bunch is the US disc from Cult Epics, which features a correctly transferred progressive transfer (no funky PAL conversion problems here) that does the best job standard def can with Borowczyk's challenging soft lighting schemes. Unlike the other discs that only include the English dub, the Cult Epics DVD contains the original Italian audio (which almost always matches the actors' lip movements and seems the most accurate), the English version (the weakest option by far), and the French track, all with optional English subtitles (which appear to be translated from the Italian and most definitely are not dubtitles). The French is easily the most robust and clear of all the options, but the Italian works best for the actors; it's really a toss up either way, but only watch it in English if you really, really cant't stand subtitles. A 17-minute interview with cinematographer Luciano Tovoli (Suspiria, Tenebrae) is exclusive to this disc and features some insight into how he adopted his often revolutionary techniques for the director's own distinctive visual style. Also included is a lobby card gallery and an interesting featurette, "Behind the Walls," with British fans and scholars (Marc Morris, Daniel Bird, and Sam Dunn) giving some of the history behind the film including its place in Borowczyk's filmography, its origins as a segment from Stendhal's Promenades in Rome, and the original casting involving Monica Vitti. Originally directed by Morris for his Nucleus Films company in the UK, it's essential viewing to get some context for this beguiling but very odd entry in the director's often mistreated filmography. Also available in the US as a Cult Epics double feature of nunsploitation classics along with the astonishing School of the Holy Beast.