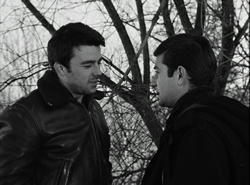 Among the French New Wave directors who rose to prominence in the late '50s and early '60s, Claude Chabrol seemed like a typical case at first: a film critic for Cahiers du cinéma who turned to directing as a response to his country's more formal postwar films. However, he showed an affinity for thrillers far more than his colleagues, who either veered in the direction of humanistic character studies (Truffaut) or extreme experimental techniques (Godard).

The film that really started it all for Chabrol was Le Beau Serge, a potent drama with stylish flourishes that anticipated his more Hitchcock-flavored films to come. Returning for health reasons to his provincial hometown after ten years in the city studying theology, François (The Bride Wore Black's Brialy) reconnects with the people from his past and is most disturbed to find that his one-time best friend, the town golden boy Serge (The American Friend's Blain), has soured considerably and become a pitiful, unhappily-married drunk. Determined to discover why his friend has degenerated so badly, François must resort to drastic measures to stop this downward spiral. 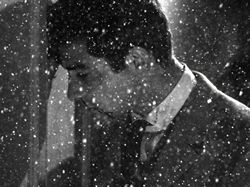 Shot with a stark, beautiful simplicity in Chabrol's hometown of Sardent, this film is often cited as the first genuine French New Wave film; it may not be the best known or the most influential of the pack, but it's undeniably a Chabrol film and shows many of his visual schemes and narrative approaches already fully formed. (He had also directed a few short films before this that certainly helped, too.) His use of spiritual symbolism is a bit different from his later work, however, including a third act reliance on Hitchcock's transference of guilt in a more redemptive fashion that fuels an elegant, ambiguous story resolution. The final 20 minutes are especially striking in visual terms, too, with the town and characters cloaked in a beautiful snowfall similar to Lars Von Trier's Europa decades later. Chabrol also pops up in a minor role onscreen as well, but perhaps the niftiest flourish is an appearance by future director Philippe de Broca (King of Hearts) as a character named "Jacques Rivette," an in-joke reference to one of Chabrol's critical and directorial comrades. 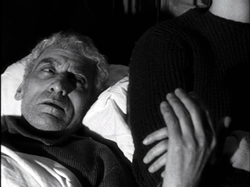 Despite its significant status in Europe, this film was treated in an oddly offhand fashion in America since its initial release by a small indie company, UMPO. Hen's Tooth provided its first English-subtitled commercial video release in a pretty ragged transfer, and then it was largely unavailable for many years. Thankfully Criterion has finally given Chabrol his due by releasing this film in a beautiful new HD transfer from the original negative on both Blu-Ray and DVD, though the former is definitely more recommended as it captures the important textural details of the town setting far more effectively. (A German DVD release preceded this one in 2011 but isn't English friendly.) The uncompressed French mono soundtrack sounds excellent as well and features optional English subtitles. The extras are entirely Chabrol-centric, appropriately enough, kicking off with the excellent audio commentary by biographer Guy Austin who discusses the director's segue into directing from writing, his place in the French cinema movement of the period, and the actors and themes which would recur in his later work. Francis Girod's "Claude Chabrol: Mon Premier Film" from 2003 features the late filmmaker and Brialy talking about the making of the film with a welcome emphasis on the shooting location and what the film said about French local lifestyles of the time, while a vintage 1969 Chabrol interview from the TV afternoon program L'invite du dimanche features him returning to the same Sardent locations. Also included are the original French trailer and a booklet containing liner notes by critic Terrence Rafferty, who focuses on the film's place in French film history and the unusual techniques of its delicate, light-drenched cinematography. A lovely release and a welcome tribute to a filmmaker who deserves a more significant role in film history books.