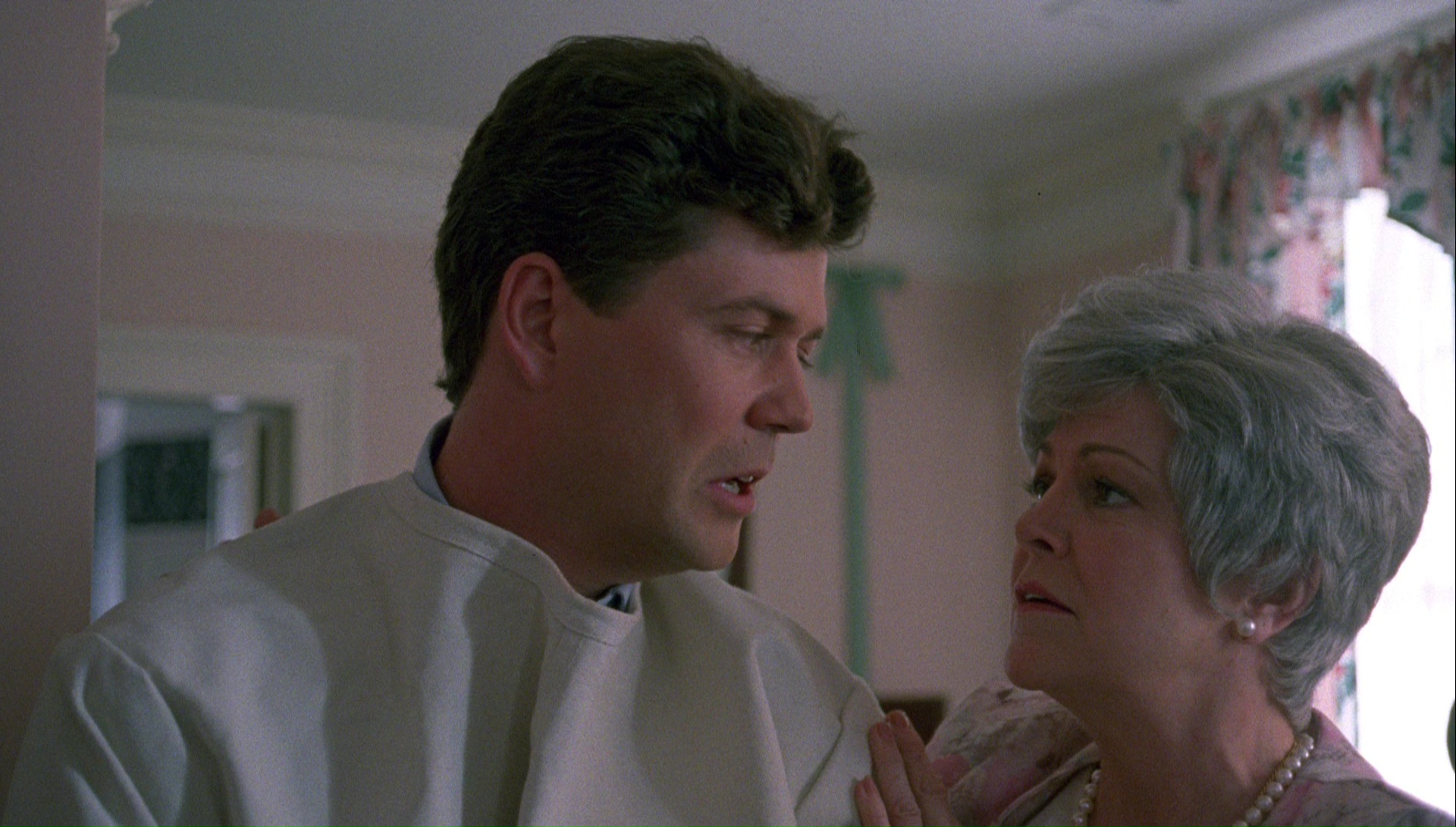 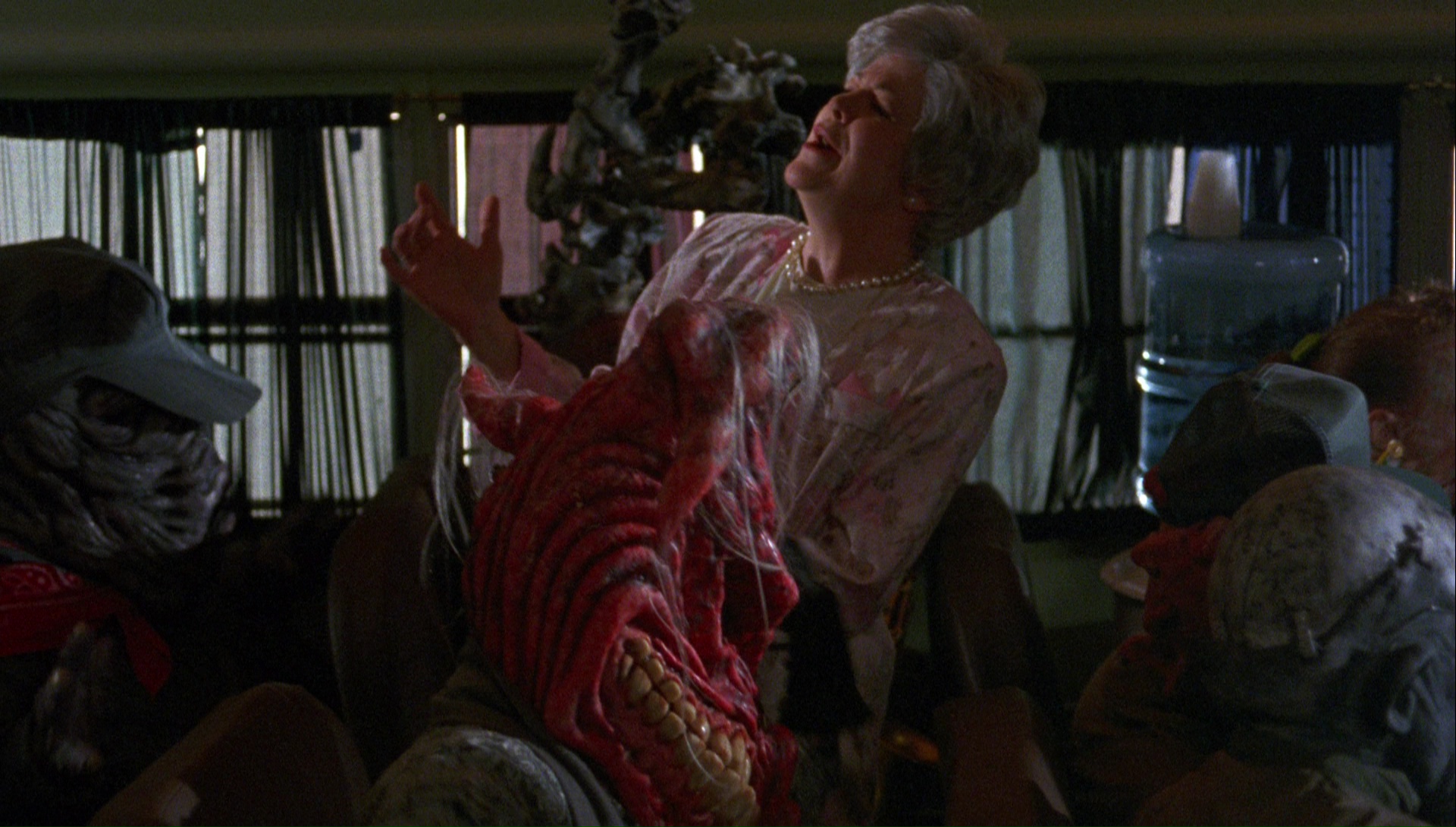 The transition from darkly humorous gritty gore to daffy monster comedy finally reached its climax with the Georgia-shot Basket Case 3, which was shot back to back with the already outrageous Basket Case 2 in the early '90s. Following a quick reprise of the chaotic final minutes from Basket Case 2 (which won't be described here for those who haven't seen the film), we pick up a few months later with Duane (Van Hentenryck) held in a straitjacket under observation in the house of Granny Ruth (Ross), who's busy with her freakish tenants helping out Belial's pregnant girlfriend. Meanwhile Belial, still traumatized from recent events, isn't talking (psychically, that is) to Duane but has to come out of his shell in time to become a new dad.

Of course, as Granny Ruth explains, there's only one doctor qualified to handle such an unorthodox birth, and he lives in Georgia. So it off on a road trip in a big yellow school bus they all go, having a sing-along to "Personality" along the way. Unfortunately their destination brings them face to face with nasty cops, a kidnapping scene to swipe Belial's dozen babies, and a bizarre mechanical finale that plays like a spoof of Aliens. Will the freaks ultimately come out on top, or will society crush them under its heels? 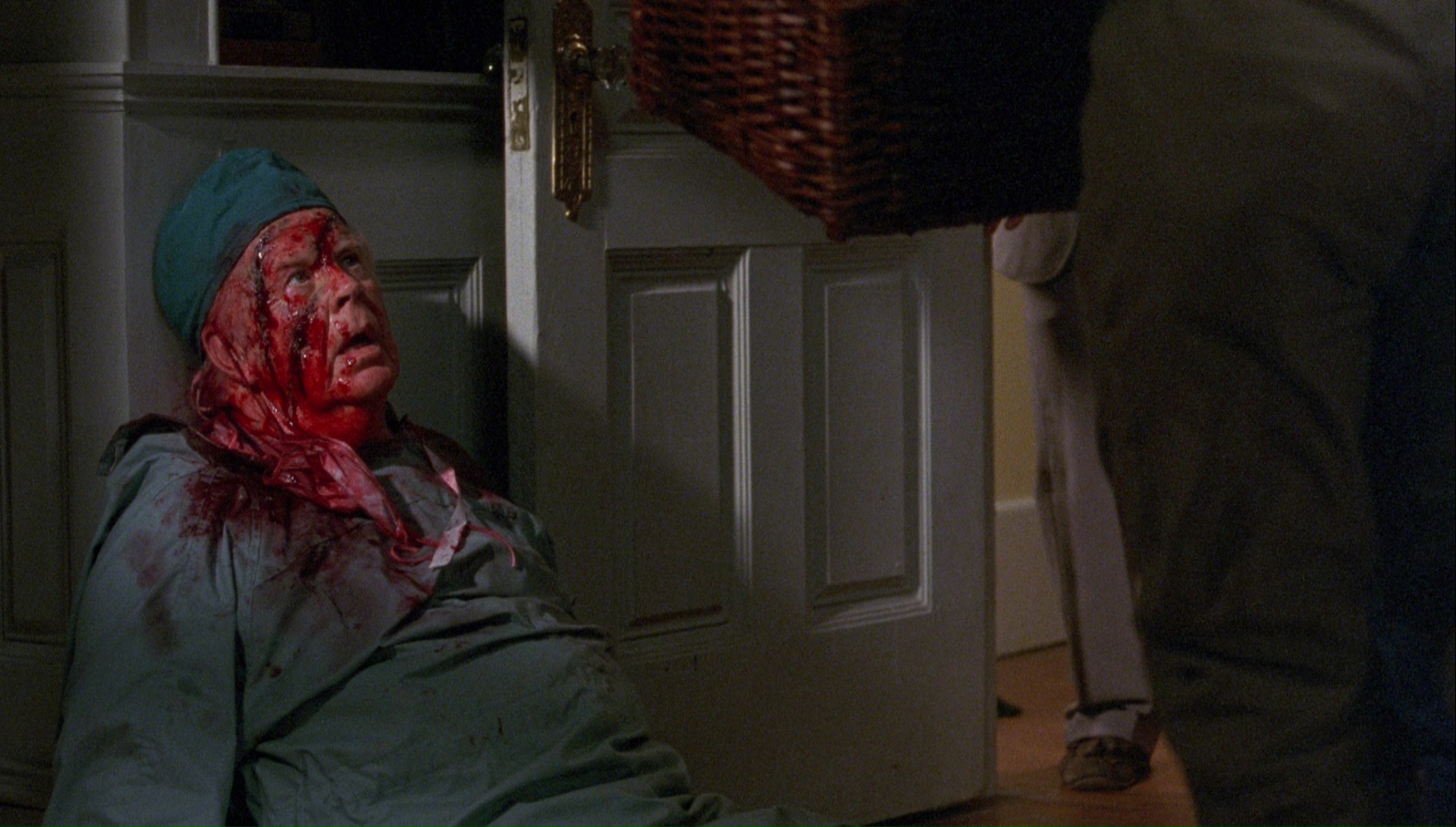 The completely ludicrous MPAA battle surrounding director Frank Henenlotter's Frankenhooker (which came in between this and the previous Basket Case film) must have had something of a chilling effect on Basket Case 3, which features 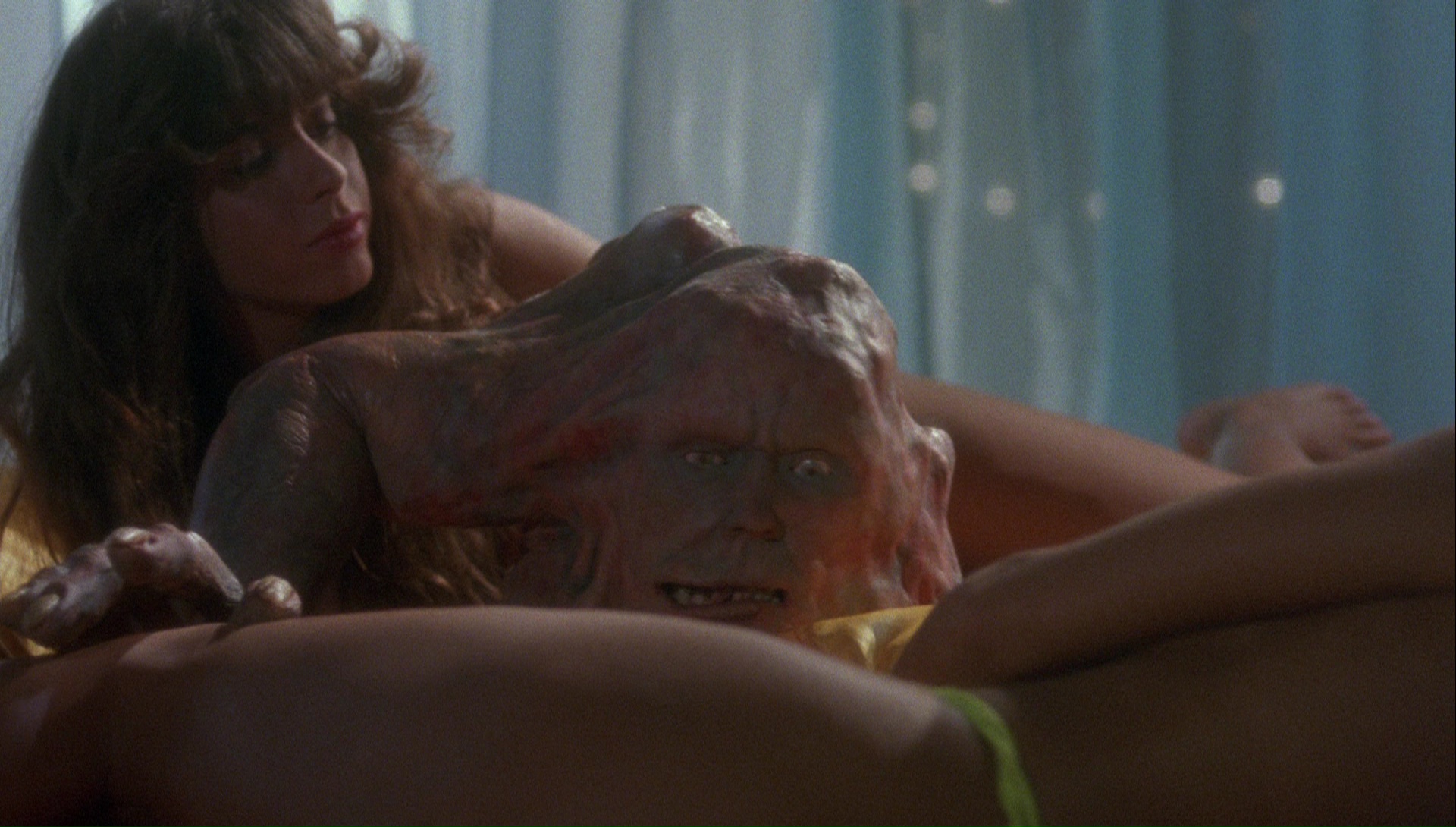 only a tiny smattering of blood but compensates with a nonstop parade of latex grotesqueries. The death scenes here (apart from a couple of fleeting exceptions) are played so blatantly for laughs that no one could possibly be offended, and the gambit paid off; this not only earned an R rating (opening Belial sex scene notwithstanding) but became the only Henenlotter film to earn a DVD release in America from a major studio (Fox, somehow, following a VHS release from Universal!). It's nice to see the appealing Van Hentenryck and Ross together again after part two (along with returning composer Joe Renzetti), and while the production was reportedly a troubled one, it hangs together well enough to send the series out on an appropriately boisterous (albeit now very dated) note. Also worthwhile is the inversion of formula here with Belial here essentially becoming the hero (including that daffy climax, a scene not easily forgotten), with Duane now the shunned outcast.

As mentioned above, a Fox DVD of Basket Case 3 appeared in 2004 but didn't stay in 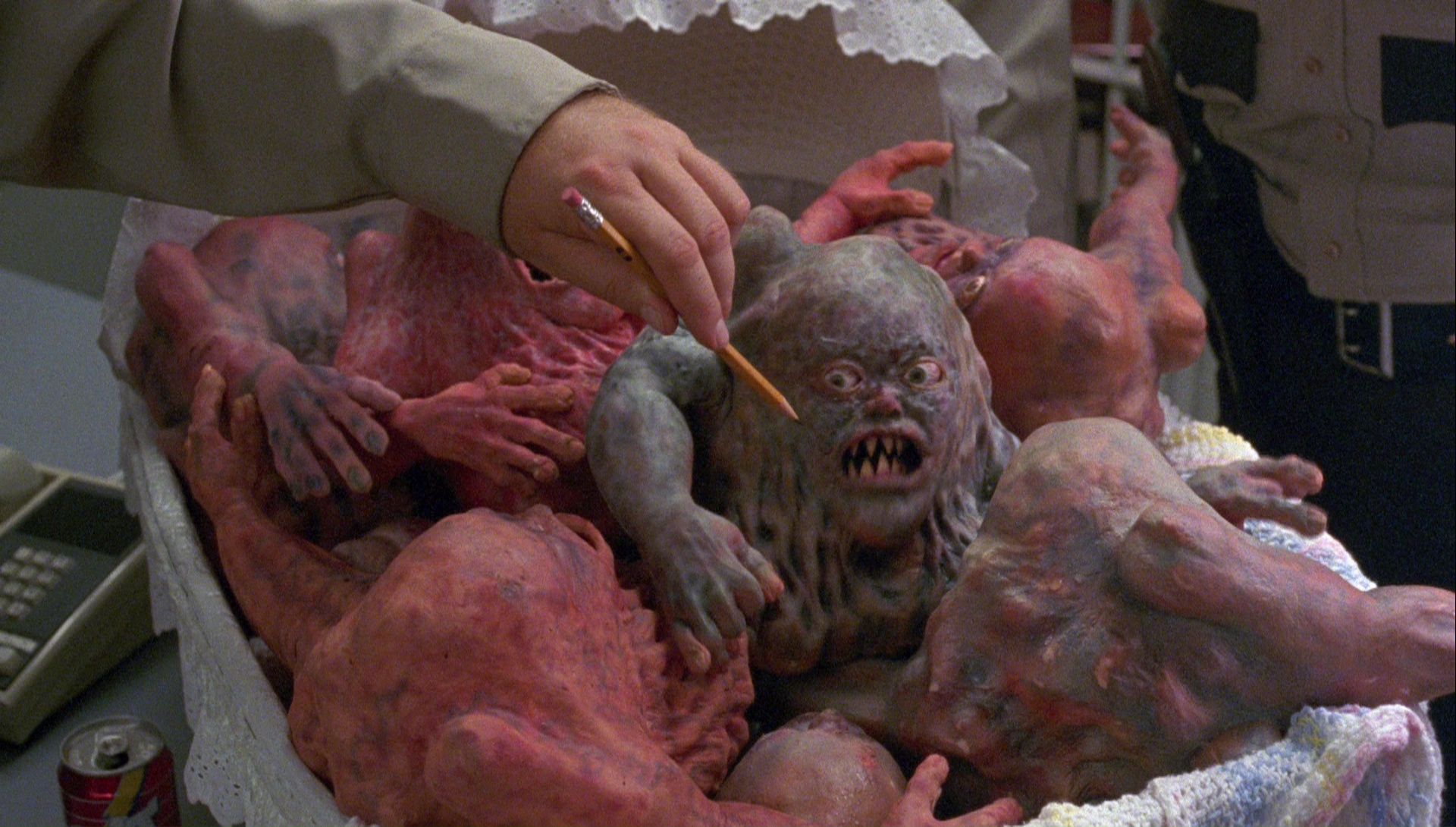 circulation for too long; meanwhile the usual variants appeared in Europe, all taken from the same full frame source used from the old VHS days. While Basket Case 2 had a solid featurette in its DVD reissue from Synapse, the 2012 DVD edition and the sharper, richer 2016 Blu-ray are far more modest with just a theatrical trailer (which is loaded with major spoilers, in case you're sensitive to that). That transfer looks great, not surprisingly, with better framing, and more stable, colorful, clean presentation than before. (A Blu-ray trilogy steelbook is also in the UK for those partial to Region B.) It's very similar to the previous entry in terms of color palette and atmosphere, so if you've seen that one from Synapse, this is very close appearance-wise. In whatever shape you meet him, Belial's always a welcome presence in any twisted horror fan's home and this release is no exception.