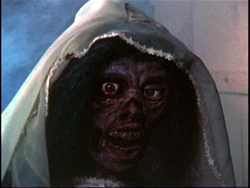 If horror fans gave out prizes for best packaging, a surefire contender for 2011 would have to be Camp Motion Pictures' lovably retro and utterly low rent (in the best possible way) The Basement: Camp Retro '80s Collection. The oversized cardboard box mimics the appearance of those old Wizard and Continental Video cases from the VHS era, and a tape copy of the title feature (a previously unreleased Super 8 horror anthology) is even included as a bonus (with a red plastic shell, natch). The three-disc DVD set packages three of the five films from the label's previous Retro '80s Horror Collection (Cannibal Campout, Video Violence, and Video Violence 2) and adds two new features as an extra incentive. The biggie here is obviously 1989's The Basement, the aforementioned anthology and the only other directorial credit for Ghoul School's Tim O'Rawe. It was also co-produced and shot by Mike Raso, who went on to become president of EI Cinema (and all of its subsidiaries including Alternative Cinema, After Hours, etc.). 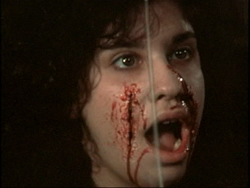 The film itself is an endearingly threadbare homage to Tales from the Crypt, with four strangers finding themselves in a dank basement where a hooded, freaky-faced host welcomes them to "a confessional" where they will confess their "sins from the future." How does that work, exactly? Well, looking into your heart, of course, which kicks off four stories of murder and mayhem: a jacuzzi-like swimming pool demon helps a cheating wife who wants to kill off her spouse (and anyone else who gets in her way); a curmudgeon teacher (who fantasizes about slaughtering his students in a truly showstopping sequence) learns the meaning of Halloween the hard way when he refuses to participate in trick or treating (a theme familiar to viewers of Tales from the Darkside and Trick 'r' Treat); a haunted house's newest owner, a young bachelor, is tormented by the ghastly legacy of a mass murder on the site years before; and by far the best of the bunch, a low-budget horror movie is turned into pandemonium by a zombie outbreak. 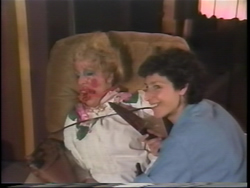 The film was never officially completed until 2010 when a final sound mix (including a lot of amusing canned dialogue, some of which could become very popular on YouTube) and credits were created along with (presumably) some nips and tucks in the editing. Image quality is actually much better than you'd expect for the most part, though things go south drastically a few times during the third and fourth stories whose night scenes tend to turn gray and murky. Actor and crew member John Fedele joins Raso for an amusing audio commentary ("What is this? Why does it exist?") with an understanable concentration on the special effects by Scott Hart, which are actually quite excellent considering the budget. Surprisingly, there's a lot more than that; you also get almost seven minutes of good 'n' gory outtakes, a local J 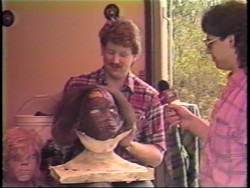 ersey news feature on the making of the film including chats with O'Rawe and Hart, three amazing episodes of the public access music video/horror/sketch show The Meadowlands Showcase from the same crew (one with optional commentary, "The Halloween Takeover"), and two very bloody O'Rawe short films, "Say No to Drugs" and "Vengeance." An absolutely amazing disc if you're in the right frame of mind.

The third DVD appears to be a direct port of the two Video Violence films from the previous set, while Cannibal Campout is pulled with its commentary apart from its former DVD companion, Wood Chipper Massacre. The other newbie here (complete with a commentary as well) is Captives, an obscure crime/horror offering from Gary Cohen, director of the two Video Violence films. This one was hacked down by Majestic HOme Video back in the VHS days and (barely) released under the title Mama's House; this may actually mark the first commercial availability of the film intact and under its original title outside the homemade circuit. It's basically a standard home invasion story with a few macabre flourishes about a recently married woman who's just had a baby, and her husband is off at work. Suddenly a crazy woman shows up with two lunatic male accomplices who hold her, the baby, and several other family members passing by (including grandma, who gets trussed up and painted in garish make-up) captive for much of the film. Short, sweet, and very lo-fi, this one was shot on a VHS camcorder and still looks it, with tape lines at the bottom of the screen and very murky sound; however, if you're already familiar with the more obscure side of DIY '80s homemade horror, you should have an idea of what to expect. However, newbies should definitely stampede to the main feature first and use this one as dessert; if you're unfamiliar with the other films in this set, click on the link above for the Retro '80s Horror set and prepared to be astounded.