castle. Peter and the beautiful young Eva (Sommer) decide to investigate the castle, and just for kicks, they read aloud an incantation Peter has discovered on a rare parchment in America. It seems this incantation can bring the Baron back to life, and sure enough, a mysterious form starts shuffling outside the door. The parchment accidentally burns (a nice nod to Jacques Tourneur's Curse of the Demon), leaving Peter and Eva helpless as the Baron begins to ravage the countryside. First the Baron, who has not aged well over the centuries, seeks the aid of a doctor who winds up on the wrong end of his scalpel. Eva has a menacing encounter with the cloaked menace in the fog-shrouded streets at night, and then the local handymen begin turning up dead and impaled at the top of the castle (a clever tourist idea). Thanks to the testimony of a spooky little red-haired girl named Gretchen (Deep Red's Elmi), our protagonists realize that the Baron has returned to his old stomping grounds and is gradually regenerating with each passing day. Peter and Eva seek the aid of Christina Hoffman (Rassimov), who invokes the spirit of the Baron's arch rival, Elizabeth Holly, and reveals the only means by which he can be destroyed. Meanwhile, a new owner for the castle shows up-- the wheelchair-bound Alfred Becker (Cotten), who seems pleasant enough at first-- but astute viewers shouldn't have much difficulty figuring out his true intentions. Before long, Eva and Peter get a much closer look at the Baron's infamous torture chamber than they ever expected.

Following the apocalyptic black humor of his body count classic Bay of Blood, Italian horror maestro Mario Bava found himself in the odd position of trying to cater to modern bloodthirsty audiences while adhering to his own need for artistic expression. Given the opportunity to shoot on a larger budget in an elaborate gothic castle in Vienna, Bava agreed to tackle Baron Blood (Gli orrori del castello di Norimberga), which became a drive-in favorite thanks to AIP's typically hyperbolic sales job. It also marked his second collaboration with producer Alfredo Leone, with whom he made the diverting sex comedy Four Times That Night.

Even more than your typical Ba 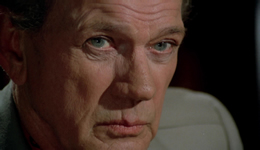 va film, Baron Blood runs more on visual style and psychological manipulation than linear storytelling or character development. The director's painterly visual sense manages to wring every drop of tension out of the threadbare storyline, which simply serves as a catalyst for one macabre setpiece after another and often feels like it's being made up as it goes along. Filled with nods to his previous films (the resurrected marauder from Black Sunday and the fog-shrouded village from Kill Baby, Kill!, for example), Baron Blood marks Bava's nostalgic farewell to the '60s Gothic tradition. Thanks to the oft-mentioned Coca-Cola machine in the castle and the deliberately gimmicky trappings of modern Austria, Bava wittily offers a dissertation on the transformational powers of horror from one decade to the next. His subsequent film for Leone, Lisa and the Devil (also starring Sommer), grapples with many of the same concepts, albeit in a more lyrical, eroticized context. While Baron Blood attempts to drag the past (represented by the Baron and Elizabeth) kicking and screaming into the present, Lisa reverses the tide and somberly draws its characters from the present into the past. In Baron, the plush airplane of the opening scene brings the audience forward (accompanied by Stelvio Cipriani's deliberately kitschy music), while Lisa concludes with the same plane completely abandoned and transformed into a vessel of death (or at least purgatory).

For its first two decades of existence, most American viewers only saw Baron Blood in the shortened AIP edition which clocked in at just over 90 minutes. Featuring a much more overtly spooky score by Les Baxter (who also rescored Black Sunday, Black Sabbath, and The Evil Eye), this version featured an alternate, bloodless take of the doctor's throat-slashing murder and deleted several minor dialogue and travelogue passages. The HBO/Image laserdisc (paired with Circus of Horrors) preserves this edition for those who want to keep the Baxter score (one of his best efforts, actually), which the full-strength version with Stelvio Cipriani's highly diverse original music debuted first on laserdisc from Elite Entertainment and then on DVD from Image Entertainment. The quality was a step up but still left a huge amount of room for improvement t

hanks to a non-anamorphic transfer and a weirdly gritty, harsh visual texture. Though the DVD and laserdisc share the same murky-looking television trailer, the DVD also contains far more extras (and much better packaging), thanks to a diverting and revealing gallery of production and promotional photographs from this film and Bava's career in general, accessible from the amusing menu design. The Image DVD also marked Image's first Bava release of many to come, and after Leone took the licensing rights over to Anchor Bay, it was reissued in a better anamorphic transfer as part of their second Bava box set. (A dire bootleg edition from Cheezy Flicks was also released around the same time and should definitely be avoided.) The Anchor Bay version adds radio spots and, more significantly, a solid Tim Lucas commentary covering all the bases including filming locations, trivia about the production design (such as the pivotal Baron painting), cameo appearances by crew members, amusing anecdotes about the production itself (including a fun bit about learning American profanity), and alternate casting choices including Vincent Price and Ray Milland. Released shortly before the Anchor Bay disc was a unique alternative in Italy from Raro, containing the standard English version along with the Italian version with optional English subtitles as well as a 16-minute Lamberto Bava featurette, "Il castello dell'orrore." 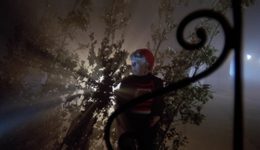 and the 2013 UK edition from Arrow revisit the film on DVD but more significantly also mean a welcome upgrade to Blu-Ray, with an attractive new HD transfer featuring more comfortable 1.661 framing exposing more vertical information than prior versions. Colors look excellent (especially those lustrous reds), and while the film stock never yielded the most razor-sharp results, it's easily the most impressive this film has ever looked on video (and a sight better than some of the prints lying around, too.) Both releases have the same framing and color values, and both sport LPCM two-channel mono soundtracks. As usual the opening credits have that dirty, filmy look possibly caused by using dusty glass plates to create the titles, but after that it clears up and looks very clean and impressive. The Tim Lucas commentary is carried over here and is still worth a listen on both, while the Italian opening and closing credit sequences are included as bonuses on the Kino disc. The standard English AIP trailer is carried over here in better condition, but much more entertaining is the wild, wild Italian trailer, done in a graphics-heavy style similar to the classic Carnage trailer for Bay of Blood. The three radio spots are included as well ("He earned his name through torture and death!"), while the Kino disc also has trailers for Black Sunday, Lisa and the Devil, House of Exorcism, and Hatchet for the Honeymoon.

The Arrow release easily launches ahead in terms of special features and viewing options, though, and pulls out a trump card right at the beginning by featuring the complete Italian version with optional English subtitles. It's a very good track and gives the film a somewhat weightier ambience, with Sommer in particular coming off well here. A third viewing option is the AIP Baron Blood version, or at least that's how it's billed. More accurately, it's the soundtrack for the AIP cut, running just over 90 minutes and featuring the Les Baxter score, with the superior HD transfer of the European cut edited to match it. That means you won't get the AIP title card or the alternate PG-rated throat slashing shot, but it's a tiny price to pay to finally get this long-absent variation back on home video.

Along with featuring all of the extras from the Kino disc, the Arrow one adds on some new goodies in addition to the two alternate versions, which would be enough to make this one essential anyway. Film writer Alan Jones appears for a brief three-minute video intro in which he clearly sketches out the state of Bava's career at the time, while filmmaker Ruggero Deodato contributes an 11-minute video chat in which he reminisces about first meeting Bava (while playing tennis with his son Lamberto, the similar "cinematic aura" between the director and Roberto Rossellini, the dismissive treatment towards horror filmmakers by Italian critics, and his own feelings of inadequacy working on Antonio Margheriti's sci-fi films upon seeing Bava's Planet of the Vampires. Finally you get a nice "Bava at Work" gallery of shots of the playful director on the set of some his most famous projects. Good gothic fun all around and a fine way to reappraise one of the director's later horror offerings.