Never one to shy away from touchy subject matter, Bigas Luna seems determined to become to Spain what Russ Meyer is to America and Tinto Brass is to Italy. One of his most explicit works to date, The Ages of Lulu (Les edades de Lulú) begins like a fairly standard knockoff of 9 1/2 Weeks but swerves into far more dangerous waters that could only be explored in Europe. 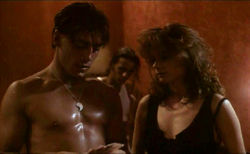 Sweet little Lulu (Live Flesh's Francesca Neri) discovers her sexual awakening at the hands of older, self-absorbed Pablo (Óscar Ladoire), who makes her acquaintance by shaving her nether regions ("...so you'll look prettier"). Naturally they become a couple and experiment with various kinky situations, such as a blindfolded threesome with her brother. Lulu also becomes friends with a transvestite prostitute, Ely (played by female María Barranco with an added latex appendage), who joins them in the sack as well. Soon Lulu decides she's tired of being a sex object and goes off on her own. "Men enjoy looking at lesbians, so why can't I enjoy gays?" she ponders as she saunters into a local boy bar, where she hands over some cash to one male couple (including a young 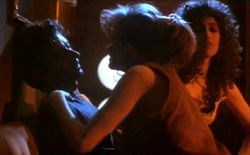 Javier Bardem) and frolics with them in a back room. Things turn much, much nastier, however, with a grueling finale that can only be described as what might happen if David Lynch directed William Friedkin's S&M shocker Cruising.

The Ages of Lulu is one of the many Luna films which remain difficult to see outside their native country - perhaps due to several scenes treading perilously close to hardcore and the abundant bare flesh on display. Neri's engaging, uninhibited performance really carries most of the film as she makes a convincing transformation from a naïve teenybopper to a sadder but wiser pleasure seeker. The Spanish DVD from Manga offers a nice widescreen presentation of the film, taken from a mostly clean print with only a couple of minor blemishes near the beginning. Optional English subtitles are easy to read and seem to be accurate, while the stereo audio mostly comes to life during the song passages (such as one memorable encounter set to Lou Reed's "Walk on the Wild Side"). The disc also includes a trailer set entirely to the same song.

Best known to foreign film fans for his sexy, off-kilter films like Golden Balls and the incredible Jamón Jamón, director Bigas Luna first assaulted the international market with the bizarre thriller Reborn and the even stranger Anguish, a novel twist on the old film-within-a-film gimmick. The opening of the film (and even its original print ads!) warned viewers that they would be subjected to hypnotic suggestion throughout the film, but this is probably the least of the audience's problems as the overlapping narratives veer wildly between reality and illusion until the viewer is left completely disoriented. John (Michael Lerner), an unstable, nearsighted mama's boy working in an opthamologist's office, loses his grasp on sanity after being laid off. His creepy and domineering mother, Alice (Poltergeist's Zelda Rubinstein) urges him to seek revenge and carve out the eyeballs of his victims to compensate for the wrongs the world has committed against him. Then... well, let's just say this is one film where the less said, the better. An insanely difficult film to warm up to, Anguish relentlessly confounds expectations by turning in on itself and turning into a series of Chinese boxes. While its central conceit has turned up in films ranging from Targets to Demons, this odd, gruesome variation interweaves its narratives so completely that the knee jerk, nonsensical shock ending almost starts to make sense in retrospect. Lerner and Rubinstein both deliver ridiculous, over the top psychotic performances which are difficult to assess, while Luna shows great visual flair in his use of hazy gold, scope photography (later duplicated in Dario Argento's Trauma). Finally restored to its original, desperately needed widescreen format, Anguish works much better on DVD than on the previous VHS and laserdisc editions from Fox. The highly creative and manipulative stereo soundtrack, which only kicks in full force half an hour into the film, was always the strongest point of Fox's version, and Anchor Bay goes one better by presenting it in 5.1. The listener's ears can't help but be jolted by the enveloping, highly directional sound mix, one of the most creative uses of audio design imaginable. Just watch and experience it for yourself. The disc also includes a mediocre Spanish trailer with subtitles; presumably the one used in American movie houses has been lost, which is a shame. Definitely a rent before you buy it kind of movie, but its fans should be quite pleased.

Evidently still intrigued by the inherent problems with Spanish machismo, Spanish director followed up his successful Jamón Jamón the next year with this equally absurd tale of a lothario's rise and fall in the construction business. Sort of a sexed-up European variation on Ayn Rand's The Fountainhead, Golden Balls (Huevos de oro) takes that novel's already blatant phallic symbolism and pushes it to ludicrous extremes that would make Harold Robbins and Sidney Sheldon blush. We first meet enthusiastic young Benito Gonzalez (Javier Bardem) as a recently released soldier intent on making his fortune in the construction business. He decides to bring along his best friend, Mosca (Francesco Dominedò), and his faithful girlfriend, Ana (Raquel Bianca), to whom he promises her own lobster tank and a private bathroom with a bidet. "Don't ever lose that smell," he growls to her as they make love in the sand, a pretty clear indicator of where this film is heading. Benito's

plans are shattered when his two companions fall in love and take off together, leaving him to erect his superstructure all alone. Despite a lack of finances, he proceeds with his plans and begins an affair with his sultry secretary, Claudia (Maribel Verdu), who is also a struggling model. Benito talks Claudia into bedding potential bankers and financiers, then turns around and marries beautiful but naive banker's daughter Marta (Pulp Fiction's Maria de Madeiros). Eventually Marta and Claudia find out about each other, compare notes (and breast drawings -- don't ask), and wind up engaging in a torrid menage a trois with Benito. However, our overbearing antihero's plans don't really fall into place as we follow him over the next few years through wild parties, temporary paralysis (see Live Flesh for more of Bardem in a wheelchair), suburban hell, and an ill-advised trek to Miami, complete with a surprise appearance by a young Benicio del Toro.

Despite his gritty visual style, Luna makes a few interesting attempts here at Almodóvar-style outrageousness thanks to giant lip-shaped couches, Douglas Sirk-inspired plot turns, and torrid soap opera style dialogue. However, this is still unmistakably a Luna film; just check out the surreal dream sequence (complete with flying eggs, crumbling towers, and a woman's genitalia swarming with ants!) or the proliferation of sweaty, overheated, fleshy sex scenes. Bardem is excellent as usual, making his essentially worthless character a whole lot more compelling than he has any right to be, while the women all look appropriately sexy even when it's impossible to comprehend why they would choose to stay with such a deadbeat. Though Golden Balls never made it to American theatres, it did fairly well in Great Britain (where Jamón Jamón was a surprise hit) and made it to a widescreen presentation on videotape. Many bootleg outfitters have circulated it around ever since, which makes the overdue DVD release a welcome relief. The muted picture quality isn't much of an improvement over the tape, with some fairly harsh shimmering abundant in most of the landscape shots, but the film was shot in a dark, subdued fashion by Luna anyway. The scope framing looks just right and preserves the film's bizarre compositions, while the burned-in white subtitles are almost always legible but tend to smear slightly. More satisfying is the Dolby surround audio, which is surprisingly aggressive throughout even the more subdued scenes and does an effective jobs of rendering Nicola Piovani's elegant score from the front and rear speakers. However, for some reason the sound features a few fleeting audio dropouts; these only last for under a second at a time but are a little disorienting. The disc also includes a series of "director's notes" by Luna (which are quite rambling but essentially sum up the major themes of the film), cast and crew bios, and a text interview with Luna in which he discusses his views on gender roles and filmmaking.

This overwrought and often very funny soap opera provided Bigas Luna with a good shot at the same critical and popular following afforded his fellow countryman Pedro Almodóvar, at least in Europe where this became an unexpected hit. Unfortunately it was all but ignored in America, where its mixture of provincial satire and luscious sex scenes proved bewildering. Fortunately Luna still continued unabated with films like Golden Balls and The Tit and the Moon, and it's about time English speaking audiences caught up with him.

A dusty Spanish town is the setting for our saga of lovelorn families,

where the biggest local industry is an underwear manufacturer whose slogan reads: "Inside every man's trousers is a Samson." Naturally the town landmark is a huge cutout of a ridiculously overendowed bull. The underwear tycoons, led by matriarch Carmen (Anna Galiena), are appalled when the heir to their fortune, Jose Luis (Jordi Mollà), sets his sights on the beautiful Silvia (Penélope Cruz), daughter of the village brothel owner, Conchita (Stefania Sandrelli). Got all that? Things get complicated when one of the prime underwear stud models, Raul (Javier Bardem), takes a liking to Silvia (after bullfighting in the nude at midnight with his best friend -- err, don't ask), and Carmen recruits Raul to lure Silvia away. Of course Carmen samples the hardware first, and Jose Luis has no intention of giving up his beloved without a fight, regardless of her feelings. Even worse, Jose Luis is more than a little familiar with Silvia's mother, setting off a whole chain of jealousy and passion that culminates in two men whacking each other senseless with giant hambones.

The title of this film translates as Ham Ham, which could account for all the strange pig imagery running through it. Flesh is the controlling theme here, whether it's animal or human, and the actors engage in lots of sweaty, revealing, and goofy sex scenes, with the gorgeous Sandrelli (The Hairdresser's Husband) performing one truly bizarre bit involving a parrot. Up and comer Cruz makes a lovely heroine and, for you celebrity skin watchers, takes the time to appear naked about every ten minutes or so. The film's real force of nature is Bardem, who steals the film through sheer force of will. The film is exceptionally well photographed, with some nice twilight landscape shots bracketing the story at key moments, and Nicola Piovani (Life Is Beautiful) provides a subdued, haunting music score. The previous laserdisc edition of Jamón Jamón from Academy was a terribly washed out, grainy transfer with vital image area missing on all four sides. The PAL Manga DVD is a tremendous improvement, with perfect 1.66:1 framing and much more robust colours. The original film has always looked rather grainy and gritty, at least during the exteriors, but the disc looks quite good considering the source material. The stereo sound is also very strong, with clear channel separation and some nifty effects between the channels. The optional English subtitles are the same as the US edition but much easier to read. The disc also includes talent bios, the Spanish trailer, and something called "Mas Jamón," which amounts to snippets from the film edited to a love ballad.