In this deeply peculiar adaptation of Edgar Allan Poe's oft-imitated short story "The System of Doctor Tarr and Professor Feather" by way of Marat/Sade,French-born Gastón (Hansel) returns to his homeland after a stay in America and journeys by coach to visit the 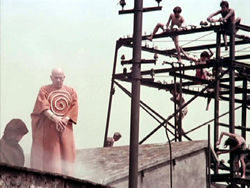 remote woodland asylum where his father died. Upon arrival he says goodbye to his travel companions, who are promptly set upon by raving bandits in the woods. After passing ominous armed guards, Gastón enters the sanitarium and meets the director, Dr. Maillard (Brook), whose unorthodox methods have the medical community chattering. Though most of the patients are free to wander around the grounds and indulge in their most perverse delusions (including one fellow pretending he's a chicken, complete with feathers), the "sane" people don't seem too grounded either; the doctor's beautiful daughter, Eugenie (Sherman), has an affinity for performance art/dancing that she carries through to a violent conclusion. That night Eugenie secretly meets Gastón and reveals the horrible truth: the doctor is actually a nefarious criminal who has led the patients in a revolt, with the real doctor and staff confined in glass cages within the mansion. The couple's escape attempt leads to a swift capture and a quick descent into depravity as the residents' mania threatens to completely overtake their isolated world.

Much more than director Moctezuma's subsequent horror efforts like Alucarda and Mary, Mary, Bloody Mary, this first film bears a striking resemblance to the contemporary films of his artistic cohort, Alejandro Jodorowsky (whose early 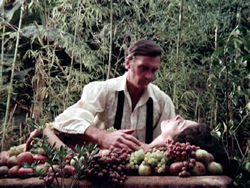 films Moctezuma produced). The free-flowing narrative barely functions on anything resembling a rational level; despite the traditional gothic source material, the film wanders from one surrealist setting to another with only the barest of connective tissue. Commercial prospects are acknowledged with a few doses of violence and full frontal nudity (restored to its original full strength presentation on this DVD), but even so, it's hard to imagine anything further from the grindhouse come-on promised by the film's American presentation under the title Dr. Tarr's Torture Dungeon, complete with a poster focusing on naked women writhing in cages. 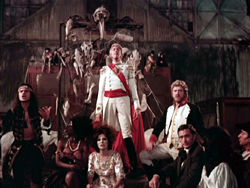 Offering a presentation similar to their excellent DVD of Alucarda, Mondo Macabro performs a welcome facelift on a film usually seen in washed-out, muddy video transfers and badly faded, reddish theatrical prints. The opening disclaimer about source damage was barely necessary; the remnants of a few hairline scratches can barely be seen in a few darker scenes but almost all of the film looks terrific. Colors are generally muted for the most part (most of the film seems to be taking place at twilight), but the disc shines when it needs to; the bizarre, orgiastic finale in particular is enough to boggle the mind with its intricate, painterly visuals. (Note that a bootleg edition sourced from the long discontinued American VHS tape is also available in bargain bin multipacks, but this abbreviated, murky-looking version is best avoided.)

The first audio option for the film is the standard English soundtrack, with a few previously excised fragments restored with Spanish dialogue (and optional English subtitles). The entire film can also be played with the full Spanish soundtrack, but considering it was all shot in English and aimed for international distribution, the first language option is the way to go.

Many of the extras are ported over from the Alucarda disc, including the Moctezuma featurette and interview with Guillermo del Toro. You also get the U.S. theatrical trailer (courtesy of Something Weird), a director's bio, filmography and 1977 text interview, a brief but handy "about the film" essay, a stills gallery, and a Mondo Macabro promo reel.

A long way from those K. Gordon Murray Mexican horrors for the kiddies, Alucarda is one of the more striking and shocking south of the border gothic fests from the golden age of cinematic sleaze. Replete with nuns, devil worship, blood baths, and sadistic religious fanaticism, this is one drive-in jewel ripe for rediscovery. 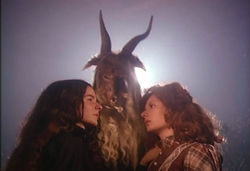 In the 1800s, young orphan Justine (Susana Kamini) arrives at a repressive convent where Alucarda (Tina Romero) has spent her life since infancy. They become fast friends and, while frolicking in the woods, encounter a sinister gypsy (Claudio Brook) who warns them about a nearby cemetery, the devil's stomping ground. After unleashing a malevolent power inside one of the tombs, Alucarda proves to be the most susceptible upon returning to the convent. The gypsy then magically reappears and initiates the girls into the ways of the horned one, courtesy of a blood rite and a sylvan orgy. Potentially bisexual Sister Angelica (Tina French) realizes something's amiss and decides to stage an exorcism, though the ceremony of tying the girls naked to 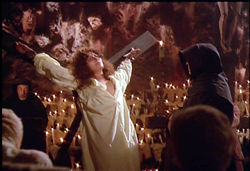 crosses proves to have disastrous results. The local physician, Dr. Oszek (also Brook), finds himself unable to explain away the bizarre deeds occurring within the convent walls, which escalate when Justine seems to be killed... or does she?

Though shot on a low budget in obviously limited sets, Alucarda is a thematically fascinating response to the increasingly depraved Italian nun antics being churned out around the same time. Even during its most outlandish moments, Moctezuma rarely seems to be pandered to the audience's baser instincts; instead his use of bare flesh and blood feels poetic and organically linked to the story, which never loses focus on the emotions and motivations of the characters. The story construction also makes effective use of Hitchcockian doubling motifs, including casting both Romero and Brook in dual roles. The last third of the film contains a number of intriguing narrative reversals which further this technique, and the finale presents a more intricate view of the relationship between good and evil than one normally expects in a nunsploitation effort. Of course, the standout scene here - a character rising nude from a blood-filled coffin and going on a murderous rampage - is quite difficult to forget, but Moctezuma imbues even the quieter scenes with a palpable sense of unease and menace. The woodland orgy is a particularly effective demonstration of his command of the cinematic medium, evoking Terence Fisher's The Devil Rides Out with a few erotically charged twists of its own. 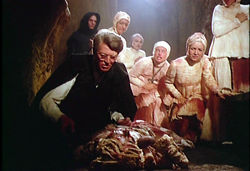 One of the earliest UK releases from Mondo Macabro, Alucarda also serves as the first American title in the line as well. Image quality is excellent for the most part, with the upgraded US disc gaining the edge as it was transferred directly from the original negative and sports only minor scratches and damage. Colors are wonderfully saturated, and while the detail is sometimes almost too sharp (exposing some of the more cost-cutting measures in the otherwise impressive production design, and also exposing some of the inferior stock used for a handful of shots), there's little quibbling to be done with this stellar presentation. The actors performed in English, resulting in an audio track which synchs up with their lip movements even though several voices appear to be looped later. Brook's voice is definitely his own, and it's interesting to see this veteran actor (who also appeared in Moctezuma's fascinating Mansion of Madness and, much later, the 007 actioner Licence to Kill) tackling two very different personae. The stereo audio track limits most of the ambient spearation effects to the low key electronic score, which sounds like a more sparse cousin to Tangerine Dream's soundtracks of the period. For some reason a persistent, bass-filled hum is barely audible throughout the English track; those with a sensitive sound system can minimize this background droning by cranking up the treble. A dubbed Spanish audio track is also included. The US disc contains the lurid theatrical trailer under the original title (though tapes have circulated under such other names as Innocents from Hell, Sisters of Satan, and Mark of the Devil 3), as well as a 15-minute featurette on Moctezuma including tantalizing snippets from his other, earlier work and several useful bits of biographical information, including his relationship with peer Alejandro Jodorowsky. The UK disc instead contains a 22-minute episode on Mexican horror from the excellent Mondo Macabro television series; perhaps for legal clearance reasons this couldn't be ported over directly to the American verison. The package is rounded out with a Moctezuma filmography and text interview as well as a 7-minute video interview with director Guillermo del Toro (The Devil's Backbone), who speaks appreciably of the film and its creator with a number of humorous interjections. He also discusses his working relationship with the late Brook, who appeared in del Toro's Cronos. The final extra is a stills gallery, rounding out an admirable tribute to one of the more outlandish entries in Mexi-horror.