If you want to maximize your enjoyment from the Italian-made Alien from the Deep, here's a tip: skip the first half of the movie. Just pop that DVD in and keep hitting the chapter skip button until you hit the 45 minute mark or so. You won't miss a thing, but in case you care, here's the set up. Green warrior Jane (Cavalli) and her camera guy (Marius) are out on a boat in the middle of nowhere and spy a big rusty ship belonging to the nefarious "E-Chem" corporation, whose covert environmental devastation is overseen by the callous Kovacks (Napier). The company apparently has lots of helicopters and boats to spare and doesn't take kindly to interlopers, so when they take a raft ashore and her cameraman gets spirited away to their industrial headquarters in the jungle, Jane has to team up with Bob (Bosch), a bespectacled guy who earns his paycheck in a way you'll never believe, to lead a rescue mission. Bullets fly now and then, but mostly everyone skulks around and barks orders in what feels like the opening act of Killer Fish (also directed by Antonio Margheriti, not so coincidentally) dragged out past the breaking point. Then the fun stuff really kicks in. It turns out E-Chem's been contaminating the local volcano below, and a huge, room-sized black claw is now punching through metal floors and walls to clutch anyone around. There's one ticked-off alien/monster/robot thing on the loose now, and it won't stop until every highlight from Aliens has been ripped off as cheaply as possible. 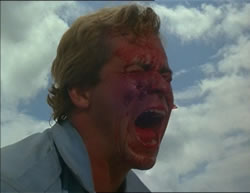 Though the leads are fairly pedestrian even by Italian schlock standards, Alien from the Deep compensates by offering a typically wonderful turn by the square-jawed Napier and the bizarre decision to include a grizzled-looking Luciano Pigozzi (aka the Italian Peter Lorre, seen in titles like Baron Blood) as a doctor who joins the heros on their mission. The alien (or whatever it is) really steals the show, though, especially when it's finally shown in all its oversized, awkward glory for the big climax complete with more flashing lights, smoke, and explosions than a Duran Duran video. 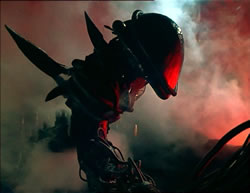 Though he's primarily known for his accomplished gothic horror films like Castle of Blood and some fun westerns and sci-fi films, Antonio Margheriti certainly wasn't above cashing in on Hollywood trends. He spent much of the early '80s churning out ridiculous Raiders of the Lost Ark imitations and, starting with The Last Hunter, made more than his share of jungle adventures. This one falls near the end of his career, made back-to-back with his two Indio films with Marvelous Marvin Hagler. Obviously Alien from the Deep doesn't stray too far from that formula in its first half, so if you've seen any other '80s Margheriti films, well, you get a lot more of that here. The lunatic portion of the film with the rampaging giant alien claw is one of the nuttiest concepts from an industry not exactly known for restraint, and each appearance is bound to elicit cheers and applause.

This was also made at the tail end of Italy's golden era of trash filmmaking, and it feels an awful lot like it was made for European television with one eye on an international theatrical release (a la much of Sergio Martino's later output). This did wind up playing theaters in Italy, but the look and feel is a lot closer to Margheriti's small screen efforts (including the infamous Yor, the Hunter from the Future, which originally existed in a much, much longer and pokier miniseries version). This direction is borne out by One 7 Movies' American DVD, which looks like a PAL transfer of an old one-inch master that's been collecting dust somewhere. It's obviously better than the cruddy gray market versions that have floated around, and the full frame transfer doesn't really look compositionally impaired; still, keep your expectations really low. The English track (which matches almost everyone's dialogue, with most of the leads providing their own voices) is provided along with an optional Italian track (no subtitles); extras include a still gallery and, if you're curious, the Italian opening and closing credits taken from a very rough VHS copy. If you know what you're getting into, this is the perfect '80s Italian popcorn flick for a late night when you're tired of watching Hell of the Living Dead.