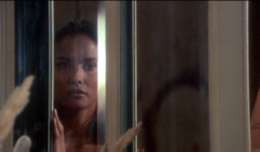 In 1930s Italy at the dawn of the facist regime, controlling filmmaker Elio (Zombie's Cliver) comes home from battling on the "dark continent" to find his country estate turning into a hotbed of sexual unrest inflamed by his latest addition to the family, a beautiful and conniving servant named Zerbal (Black Emanuelle's Gemser). Elio's extremely hot-blooded wife, Alessandra (To Be Twenty's Carati), and her assistant/sometimes lover, Virna (Laure's Belle), are soon drawn into a very hostile, manipulative triangle with Zerbal which involves lots of girl-on-girl activity. Meanwhile Elio finds his creative impulses (including an unfinished manuscript) so stunted he decides instead to mount a homemade stag film involving a domineering nun that goes spectacularly awry, leading to a fiery and deeply ironic finale. 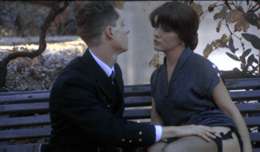 For sleaze fans, The Alcove is of primary importance as the initial erotic foray for Joe D'Amato's Filmirage, a company which went on to become an eccentric player in the Eurotrash video market with titles like Stagefright, Ghosthouse, and softcore films like 11 Days, 11 Nights and Blue Angel Cafe before morphing into Imperial Entertainment. The Alcove feels distinctly different from the usual '80s Filmirage fare and more closely resembles Tinto Brass' The Key (released a year earlier, not so coincidentally) with its period setting, powdery cinematography, and austere but graphic eroticism, along with a very Brassian prosthetic popping up during the stag film shoot. 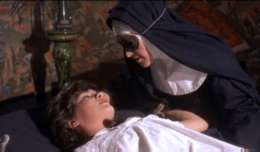 Most adventurous D'Amatophiles first encountered this film via its only significant English-language VHS release in the UK, which was quickly bootlegged all over the gray market. Unfortunately it also lost nearly two minutes of very significant, volatile footage that puts the film into a different realm entirely; while the story still held up fine and established this as one of D'Amato's most accomplished efforts, few people had any idea how far it really went. Import DVDs from the likes of X-Rated Kult eventually popped up, but American viewers can finally sample this forbidden fruit in its full-strength form via Severin's DVD, the only anamorphic and complete presentation out there. The 1.78:1 image is slightly more constrained on the top and bottom than the flat 1.66:1 transfers, but nothing seems compositionally affected. Image quality looks fine throughout given the nature of the source, which tends to rely on soft but colorful lensing. The English audio (which, per usual for most '80s Italian films intended for export, is the most legitimate option) sounds fine throughout. Extras include a '90s-era, bizarrely-composed 11-minute video interview with D'Amato at a desk talking about his films intercut with a few film clips and the juicy European, English-language theatrical trailer. If you've never experienced this film, prepare for a wild ride; and if you've only seen it via bootleg video, well... you ain't seen nothin' yet.