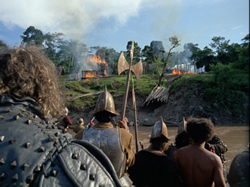 A film whose shooting difficulties have become at least as legendary as the final product, Aguirre, the Wrath of God (sometimes titled without its "the") 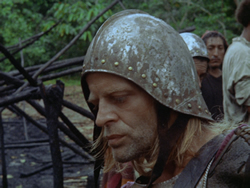 became director Werner Herzog's international breakthrough and established an entirely new age of German cinema, though the filmmaker didn't stay tethered to his native country for long. Like all of his other films, this one will be a challenge for some viewers due to its slow pace and maniacal, unsympathetic lead character. However, as with all collaborations between Herzog and Klaus Kinski, Aguirre is crucial, unforgettable cinema, and arguably the finest collaboration ever between this volatile pair.

In 1560, the depths of the jungles lining the Amazon river are infiltrated by a Spanish expedition trudging through endless miles of green wilderness. They search for the remains of the fallen Inconnu empire, which may lead them to discover the mythical El Dorado, a city of gold. The greedy and incestuous Don Lope de Aguirre (Kinski), who has brought his own daughter (Rivera) along on his quest, becomes the tyrannical leader of the rapidly diminishing explorers, who are being picked off by pestilence, cannibals, violent mishaps, and even murder by their own leader when they plot desertion. Still Aguirre pushes on, driven by his own lust for gold and glory regardless of the consequences to himself and his companions.

Firmly anchored by Kinski's fearless and harrowing portrayal, this film spins out one unforgettable image after another, culminating in a justifiably famous final image that will leave most viewers astounded that it was ever committed to film. Reports of Kinski and Herzog's clashes during the filming have now become hopelessly tangled by contradictions, with both parties plotting to murder each other and Kinski's infamous 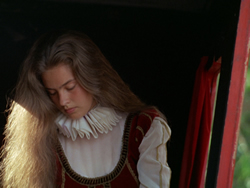 tantrums draining him out so completely that his performance in front of the camera comes across as wasted and introspective. The sublime, unsettling, and often glorious music by longtime Herzog collaborators Popul Vuh sets 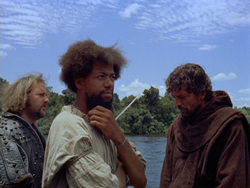 just the right mood, with the eerie, long opening shots of mountains dotted with struggling human forms accompanied by sounds apparently drifting in from the ether. Unlike Fitzcarraldo, which balanced its insane spectacle with a narrative laced with human warmth and ultimate redemption, Aguirre is essentially a trip straight into hell, a damned expedition whose likes would not appear on film again until the similarly lunatic venture of Apocalypse Now seven years later.

Upon its initial release, most theaters showed this film in its intended filmed aspect ratio of 1.33:1, though New Yorker sent out some prints matted slightly to 1.66:1. That carried over to their VHS edition as well, but since then all video transfers have gone back to the original full frame compositions. Anchor Bay's 200 DVD looked great for its time and featured a 5.1 remix that did what it could with the limited early '70s sound recording; the music fared best, often drifting ominously from different speakers. Every version is partially dubbed due to the mixture of languages involved and the rough shooting conditions, though overall the German is the most authentic; however, the dubbed English version is interesting as well, especially during the brief passages in which supporting actors read aloud in that language. In a priceless gesture for film history, the disc contained a Herzog commentary track with Norman Hill in which he offers his own linear take on the film's arduous production. Though not a true story, Herzog essentially set out to capture a time and place never seen before, one which seems to burst from western civilization's collective unconscious and mirrors the mad follies committed by inept leaders over the centuries. Of course the irony of Herzog himself often 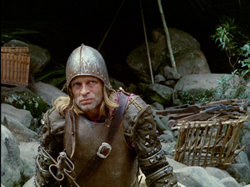 falling into this mad scheme of leadership isn't lost on him, resulting in a peculiar "hall of mirrors" effect when he discusses this film. The original German theatrical trailer was also included, along with an English dubbed variant, neither of which probably went over too well in commercial theatres. The UK disc from Stonevision is full frame as well but features an inferior transfer with no extras.

Not surprisingly, Aguirre was chosen by the BFI along with Nosferatu as a standalone Blu-ray steelbook title in advance of its massive dual-format 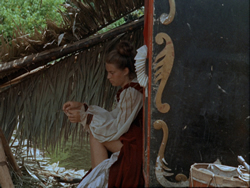 Herzog boxed set, with a virtually simultaneous American release from Shout! Factory planned as well (and not available for review as of this writing). The transfer looks gorgeous, bordering on three dimensional at times given the elaborate textures and landscapes on display in virtually every shot. Colors look terrific with robust skin tones, and the jungle foliage looks perfect without any crazy Sorcerer-style exaggerations. Both the German and English versions are included (with seamless branching allowing both title sequences) in mono with a 5.1 DTS-HD option as well, fairly similar in tone to the earlier one. The trailer and a stills gallery are included as well along with a hefty liner notes booklet containing essays by Laurie Johnson about the production of the film and Herzog's early work, Stuart Heaney on the music score, and a vintage Richard Combs review. That's really just the beginning though as the set also heaps on four additional Herzog titles: the 16-minute 1967 short "The Unprecedented Defence of the Fortress Deutschkreutz" (Herzog's first really publicly screened work), the 13-minute 1968 short "Last Words," the 11-minute 1969 short "Precautions Against Fanatics," and the 77-minute 1971 feature Fata Morgana (with the previous DVD commentary by Herzog, Hill, and Crispin Glover ported over). In typical Herzog style, these are more atmospheric snapshots than traditional narratives as he explores everything from life in a disbanded leper colony to horse racing culture and the impact of Mayan mysticism on the modern world, all captured with the eccentric, unnerving beauty that would make him one of the world's most important living filmmakers.