Anyone who attended a drive-in in the 1970s or switched on cable TV late at night during the 1980s has undoubtedly rubbed elbows with German sex comedies, those nudity-packed farces filled with randy gas-pump girls and frisky milkmaids. One of the most ubiquitous of these dubbed curiosities is 2069: A Sex Odyssey, the most 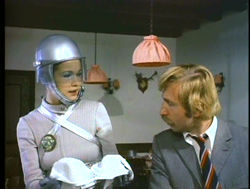 Offering pretty much the same plotline that's been around since Cat-Women of the Moon, the film begins with a spaceship full of sexy Venusians landing in a small Alpine village under the leadership of Commander Sex-Sex-Sex (Frederik). Since the women are unable to procreate without men (which begs the obvious question of how they managed to exist in the first place), they must siphon off the "vitual fluids" of Earth men and return home. Unfortunately their knowledge of male sexual functions is a bit lacking (once again, how the heck did they reproduce to begin with?), leading to a series of goofball misunderstandings and softcore 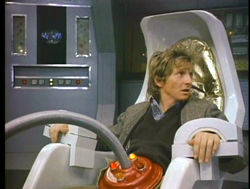 fumblings from one bed (or handy grassy field) to another.

Featuring a typically canned dubbed soundtrack, 2069 loads on the nudge-nudge double entendres in virtually every line of dialogue; as a result the product is obviously hits as much as it misses, but some of the gags do produce guffaws at unexpected moments. Though most of the sci-fi trappings are lifted from the standard sexy-space outings dating back at least a decade, it's worth noting that one of the film's most memorable features, a sperm-extracting machine aboard the spaceship, was likely inspired by Harlan Ellison's A Boy and His Dog and would turn up in the 1975 film adaptation shortly afterwards.

Retro Seduction Cinema has issued this title twice, first in a solo-billed edition with a newly-commissioned Misty Mundae short film, "The Seduction of Cyber Jane," 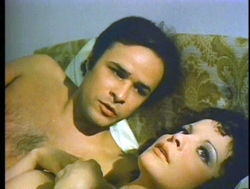 and a more value-friendly double-bill with Run, Virgin, Run,, an earlier (and better) German sex comedy about a small town with a surprisngly robust fertility rate. The menfolk attribute their prodigious offspring to a mystical wind that blows through once a year and sends them out into the wilderness, but in actuality their absence paves the way for local stud Michael (Jasinski) to plow his way through the willing women around him. For some reason the ladies don't seem too concerned about the incestuous consequences of this arrangement, but hey, it's a sex comedy. Michael finds himself in a seemingly endless series of erotic complications, including the memorable "naked in a barrel" sequence that found itself on most of the film's ad art; eventually his romantic interest in the mayor's virginal daughter threatens to put a stop to the baby boom, with everything sorting itself out for the romantic finale.

Released on video in countless editions over the decades, 2069 has never looked all that hot; relatively speaking, the DVD edition is watchable enough with decent colors but has a nasty coarse texture that rarely flatters the cinematography. Luckily it's presented open matte, so widescreen TV owners can hit the handy zoom button to recreate the theatrical experience (while losing a bit of nudity in the process, alas). Run, Virgin, Run varies between open-matte 1.33:1 (mostly the credits and some outdoor sequences) and soft-matted 1.66:1 (pretty much everything else); in any case, nothing seems to be missing on the sides. Image quality is a bit soft, but it's still more watchable than cable screenings from days gone by. Extras include two Run, Virgin, Run radio spots, a huge helping of the company's other softcore releases (mostly Joe Sarno titles), and amusing liner notes by Chris Poggiali which barely touch on the features at hand but paint a nostalgic portrait of the late '70s drive-in experience.