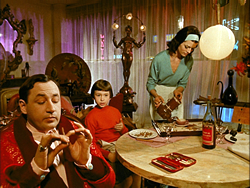 The same year directors Francois Truffaut and Jean-Luc Godard fired a powerful shot for the French New Wave with their black-and-white masterpieces Shoot the Piano Player and Breathless, Louis Malle was turning Paris into a giant colorful playground as seen through the eyes of a potty-mouthed, cheerful 12-year-old girl named Zazie (Demongeot) dropped at a train station to stay with her Uncle Gabriel (Noiret) while her mother's off with her latest fling. Obsessed with riding the subway despite the fact that the workers are on strike, she repeatedly slips away from her uncle and drags everyone around her on a string of adventures that often defy the laws of time and space. Whether trying to get an undercover cop (Caprioli) to buy a pair of blue jeans and a lunch of mussels and fries or accompanying her uncle on a trip to the Eiffel Tower, she's going to get on that metro come hell or high water. 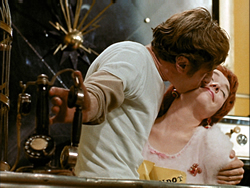 Drawing equal inspiration from silent film, slapstick, cartoons, and surrealism, Zazie dans le metro is an exhilarating sugar rush of hilarity that packs in more gags and inventiveness than most viewers can possibly digest in a single viewing. Though not a smash hit upon its release, the film has developed a respectable cult following over the years and influenced everyone from Jacques Tati (who also inspired Malle in return) and obviously modern French comedies like Amelie. The cinematic technique here is wildly unpredictable with forced perspective, jump cuts, and under- and overcranked speed creating a whirlwind of activity that never stops for a minute, the closest possible filmic equivalient to the equally breakneck verbal gymnastics of the revered source novel by Raymond Queneau. Much has been made of the film's goofy, sometimes unsettling treatment of sexuality, including Zazie's clear awareness of what adults (especially men) are capable of when left to their own devices; there's even a darkly hilarious episode in which she relates a (hopefully fictitious) account of her father's death via axe that wouldn't be outdone until Jacques Demy set a similar scenario to 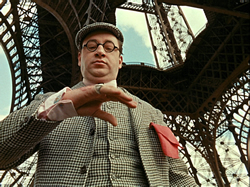 music in The Young Girls of Rochefort. The eye-popping colors, priceless snapshots of late '50s Paris, and infectious enthusiasm are all a pure joy to behold, and among the highlights, perhaps the best is a stunning sequence with Zazie and Gabriel parting ways on the aforementioned Eiffel Tower where Malle and company perform some camera gymnastics that will still induce gasps from the audience.

Despite its solid reputation, Zazie dans le metro has had a notably botched release history in America, where it's far less known than in many other countries. Much of this can be attributed to the fact that its reportory prints and video rights fell into the hands of New Yorker for much of the home video age, and as with many of their other prize titles (e.g., many of Herzog and Fassbinder's classics before the rights shifted), the film was stuck with a cruddy, outdated transfer on wildly overpriced VHS only in a handful of specialty stores. It subsequently sat out most of the subsequent DVD golden age, though in the UK Optimum issued it in their first volume of Malle titles (containing an audio interview with Jean-Paul Rapponeau, a shooting location video tour, and a brief discussion by Vincent Malle).

Fortunately the wait turned out to be worth it, as Criterion inherited the film and treated it to a worthy HD overhaul on both Blu-Ray and DVD; obviously the former is the way to go if you have the means. It must be stressed that this is not a slick-looking film; it was obviously done very rough and tumble at times on film stock that sometimes can't quite grapple with the demands of the intensely bright shooting conditions, especially the touch-and-go quality of the opening five-minute sequence. However, colors are extremely vivid and almost Bava-esque at times (especially in Gabriel's apartment), and the shady afternoon scenes look appreciably crisp and attractive. (Needless to say, it's also a gigantic improvement over the ancient New Yorker version.) The source material won't wow over anyone expecting the crystalline beauty of something like Last Year at Marienbad, but it's most likely the best this could possibly look. The mono French soundtrack is presented with optional French subtitles, with the once-shocking profanity fully intact.

As for extras, the Rappaneau interview is included along with new supplements including fairly short vintage interviews with Malle, Queneau, and Demongeot (who sadly didn't work much after this) about the film, which they all seem to love. Assistant director Philippe Collin also provides a 15-minute overview of his memories from the film shoot and his other notable productions, while creative collaborator William Klein (who is represented by Criterion's essential Eclipse DVD set) gets the longest say with a nearly half-hour audio interview about working on the film, which particularly seemed to have an influence on his magnificent Who Are You, Polly Magoo? Also included are the original trailer and liner notes by Ginette Vinendeau, who does a good job of explaining the tricky job of translating the novel to screen and some additional context for Malle's career at the time.