If nothing else, The Witching Hour proves that desperate Quentin Tarantino knock-offs didn't die in the late '90s; they just migrated over to England (thanks, Guy Ritchie!) and France. This particular "homage" 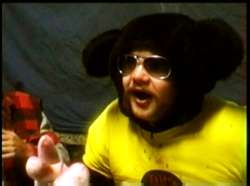 kicks off with a spastic fight sequence in front of a Kill Bill poster (really), then proceeds to ape the structure of From Dusk 'Till Dawn by setting up a crime thriller packed with stupid jokes and then morphing into a gory monster fest. Unfortunately, it also proves once again that the true value of this type of film lies in the teller, not the tale.

Setting the tone of what's the come, the opening set up for the film delivers about 3000 edits as it introduces a parade of unappealing, low-life thugs who spend their time hacking away at menial jobs and getting into trouble at night. Various text displays on the screen state random bios for each of them, but since the actors don't seem interested in creating actual characters and most of them die by the halfway point anyway, who cares? The point is, they all get called together by some gangster to go steal a 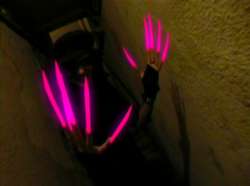 rare jewel being held at a super-secure building. Unfortunately this jewel is the property of a powerful demon, who, as some cartoon exposition explains, controls a bevy of nutso goth witches, each with a different superpower. Oh, and the building also houses a clan of cannibals who reenact Mother's Day for about ten minutes, for no discernible reason. Throats get slashed, chainsaws get pulled out, witches and Gen-X jerks fight it out for half an hour, and the viewer eventually contemplates suicide, or at least downing a dozen Tylenols.

Shot on video and relentlessly edited into a visual mush, The Witching Hour strives for an adrenaline-pumping pace akin to recent action and horror hits but comes off like a more splattery version of Underworld on a five dollar budget. The frenetic editing never achieves anything resembling a coherent rhythm, instead keeping each shot under two seconds lest anyone stop and think about the sheer incoherence of what they're watching. On the positive side, as mentioned before, there's 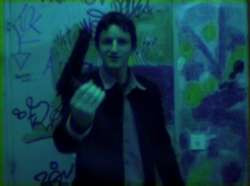 an avalanche of gore in the second half, which might make this play adequately as video wallpaper at a party with the sound turned off. Unfortunately you'll have to turn off the subtitles, too, since the script tries to go for "hip" humor, most painfully with one jackass who views himself as a comedian and spouts jokes the film itself terms "unfunny." Of course, this doesn't stop the character from jabbering idiotic jokes about topics like underage Nazi concentration camp victims (how shocking! how trendy!) ad nauseum, which just makes you pray for his death even harder.

Redemption has certainly done God's work (or in their case, Satan's work) to enrich the lives of horror fans with hidden gems they might have otherwise missed; however, The Witching Hour won't win over many new fans for director Francois Merlin, who's outed on the packaging as Eric Anderson, director of the ridiculous French slasher film, I Am the Ripper. That said, Redemption's DVD does what it can, starting with the full frame transfer which varies wildly depending on the lighting conditions. The video used in its production never looks close to slick or glossy; most dark scenes are swarming with grain and extremely murky. Even those who can't speak a word of French beyond "merci" will be able to tell the acting makes the worst Jess Franco film seem like an Actor's Studio demonstration in comparison, and the optional, awkward English subtitles were written without much care or feeling for the translation. Extras include a French video trailer, a small photo gallery, 20 minutes of deleted and extended footage (yes, there's even more, despite the fact that the film already drags on for an unbelievable 106 minutes), plus the usual Redemption cross-promoting trailers and book promo.