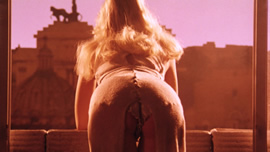 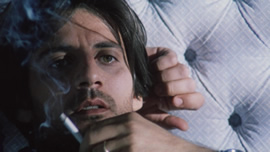 One of Tinto's most popular titles, The Voyeur (L'uomo che guarda) is in many ways his definitive directorial statement with its extended take on the male gaze and how his in particular focuses on the derrières of beautiful women. Here our audience surrogate is Dodo (Casale), a university professor, who languishes in his posh penthouse where he obsesses over the unusual habits of his luscious blonde wife, Sylvia (Vasilissa), who comes and goes at odd hours day and night. Thanks to a handy peephole in the bathroom, Dodo also observes the carnal habits of his father, Alberto (Branciaroli), who cavorts with his nubile nursemaid, Fausta (a scene-stealing Garavaglia). Dodo becomes increasingly frustrated and excited as flashbacks and fantasy collide before the entire complex web of characters finally resolves itself in the tidy (and steamy) finale.

Beautifully scored by the reliable Riz Ortolani, The Voyeur is a good example of how structure and photography can make a softcore film gripping even during the long stretches when the characters aren't copulating. On top of that, Euro film buffs will probably savor what is most likely the closest Brass has come to the aesthetic heights of Radley Metzger and Walerian Borowczyk thanks to its atmospheric lighting, luscious color schemes, and sharp eye for architecture. Made in between All Ladies Do It and the anthology film P.O. Box Tinto Brass, the film represents the director at the peak of his powers with a game cast, a witty script, and a willingness to push the boundaries of acceptable screen imagery as far as possible outside the realm of hardcore pornography. 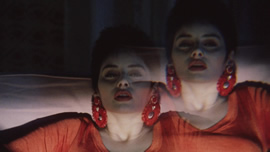 friendly release from the UK on DVDis very slightly letterboxed with a colorful but overly bright transfer, and like other Brass DVD releases, it comes outfitted with a juicy still gallery. The BBFC reported an 8 second trim from the film, which was made in addition to the considerable amount already trimmed compared to the longer Italian original. The end result is only 96 minutes, which is obviously a big problem. 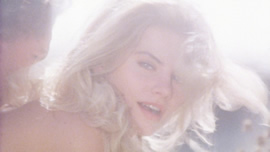 English-speaking Brass fans had to wait a long, long time to see the complete version, but fortunately patience paid off with Cult Epics' handsome release on DVD in 2008, which presents a much-needed anamorphic overhaul on the film in a sparkling, clear transfer. The compositions are slightly reframed from 1.66:1 to 1.78:1, a fate that seems to befall every single one of his titles mastered in Italy; the results are less obtrusive here than usual, though some compositions look overly claustrophobic with characters' heads scraping against or off the top of the frame at times. Color and detail are excellent, and the film here is not only completely uncut but retains the Italian audio track with optional English subtitles. Easily a must for Brass fans, the disc also comes with a new half-hour Brass interview in which the gravel-voiced director talks about making the film and his work with the actors, including his statement on sexual morality in this case which falls perfectly in line with the philosophy behind his subsequent features. The disc also includes a very funny Italian trailer with exclusive footage of Brass himself (and nothing from the film), as well as trailers for many of the company's other Brass releases.

Seven years later, Cult Epics revisited the title for a Blu-ray release from what appears to be the same film source. Some of the deficiencies are easier to spot in HD, namely some damage and an increase in visual harshness during some of the reinstated material, but overall it looks quite nice with those all-important shades of red looking vibrant and healthy. As usual for the label, audio options are lossy Dolby Digital; however, this is notable as the only version available to date with both the Italian and English audio tracks (with optional English subtitles). The Italian one is more professionally recorded but never in sync with the actors (a common practice), while the English one sounds a bit flatter and more canned but matches the actors' lip movements perfectly for most of the running time. Try 'em both and decide which one you prefer. Extras include a new HD gallery (two minutes), the Brass video interview, and a slew of bonus trailers including Cheeky, Kick the Cock, All Ladies Do It, Black Angel, and Monamour.