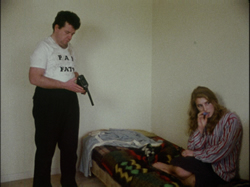 An art film that dances around the horror genre so closely it almost falls in, the early '80s Welsh offering Voice Over will be a highly disorienting experience for many considering it seemed to vanish off the face of the earth after its initial release. Familiar British TV staple Ian McNeice (probably best known for the increasingly popular Doc Martin) has one of his earliest roles here as "Fats" Bannerman, a lonely, divorced, and somewhat deluded radio performer currently working on a somber social drama called Thus Engaged. Unfortunately his pleasure at having a large listening audience begins to fade quickly when a visiting reporter informs him that everyone's just listening to him for ironic kitsch value, and the academics studying him do so at his expense. To pile on the humiliation, a night out at the pub turns nasty when two female listeners take him home and proceed to psychologically rip him to shreds. The whole ordeal gives him the idea to pull a Dark Shadows a 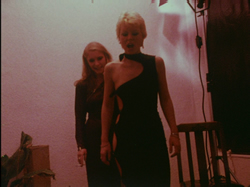 nd successfully introduce gothic elements into his show (including a fun musical shout out to Horror of Dracula), and his own life takes an equally odd turn when one of the women who mocked him earlier (Nethercote) turns up bloody and beaten in the street. He takes her in, and the two begin a rapport that turns darker as neither can seem to communicate fully with the other.

Blasted on its first major festival showing as misogynist, this film is one of the more obscure and unsettling examples of the uneasy and suspicious relationships between men and women in the early Thatcher/Reagan days after the mainstreaming of feminism. Slasher films were turning final girls into cinematic warriors and women were picking up guns as often as their male counterparts, so this film makes a fascinating case study in what happens when men who look more like a schlub off the street than a movie star try to impose their own fantasies on the opposite sex. It's actually pretty scathing to both sides of the equation, and director Christopher Monger (also a painter and theater director who later helmed the much more mainstream '90s Miramax hit, The Englishman Who Went Up a Hill but Came Down a Mountain) does an effective job of placing the film in some sort of urban netherworld (you'd never guess it was Welsh) bathed in that sort of inky, seedy, neon-laced world you only find in other films from the era like Ms. 45 or Cafe Flesh. There may be too much chit chat for some viewers (understandably, given the title), but if you're looking for something different with a nasty sting in its tail, give this one a shot. 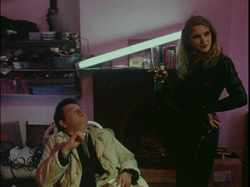 Though the packaging downplays it, the BFI release (available as a dual-format edition with both a Blu-Ray and DVD) also includes a second Monger feature, the much less rigorous (and much shorter at just under 80 minutes) Repeater from 1979. The film starts promisingly enough as a black comedy with Rashomon overtones as a beautiful woman named Marie (Chris Abrahams) turns herself in to the polic for murdering her lover, though they don't particularly want to bother with pressing charges and can't come up with a reasonable way to charge her. Meanwhile in the adjoining interrogation room, a professional killer named Dieter (Highlander's Cassady, also seen as the studio producer "FX" in Voice Over) is being questioned (by a young Alexei Sayle, pre-The Young Ones) and refusing to confess to a murder the police unquestionably feel he committed. The absurdist scenarios contrast with each other for the first half of the film until the boundaries between reality and identity begin to blur, at which point the narrative starts to get a bit mushy as well. Though it would have been better served as an ambitious short film, this is still an intriguinig little oddity with some flashes of wild cinematic invention and dry wit as well as a couple of solid lead performances.

Both features were made under less than optimal conditions and shot in 16mm, so these new hi-def transfers from the best archival elements are something of a miracle unto themselves. Both still have that a somewhat bleary, low budget visual scheme, but they also look very detailed and filmic with natural, moderate grain and punchy colors that could have come from no other time period. Apart from the extra feature film, the set comes with the usual thick booklet containing reminiscences from Monger and McNeice including notes about the controversial unveiling of Voice Over, the conditions of shooting indie films in Wales at the time (including Cardiff before it got a facelift), and the other actors, some of whom were never seen in front of a camera again.