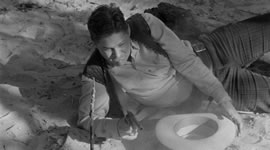 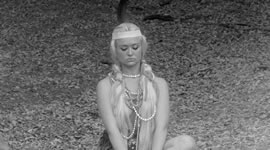 Though it faces some tough competition, this might be the most inscrutable double feature released so far by Vinegar Syndrome. Both films were shot for pocket change in the late '50s, but otherwise you'll have to turn your brain into a pretzel trying to reconcile the madness of watching these two bizarro cheapies back to back.

First up we have Revenge of the Virgins, which was first released on DVD in 2003 from Something Weird and Image on a "Naughty West Double Feature" with The Ramrodder. This time out we have a far superior, fresh new HD transfer from the original negative, properly framed, and it almost makes it seem like a real movie. Basically what we have here is a standard cowboy oater clocking in well under an hour, with a threadbare story about some treasure-hungry souls heading out through the Indian-populated woods of California after an old prospector puts out the word that there's gold in them thar hills. The white men sit around in bars, double cross each other, yell a lot, and fire plenty of bullets before the worst of them get their comeuppance at the end. 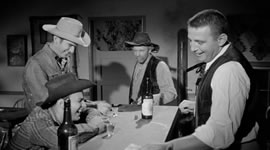 What sets this one apart is the fact that the more legit actors had no clue they'd be intercut with footage of a bunch of topless Indian maidens led by Yellow Gold (Carver), a buxom blonde raised from childhood by the tribe. 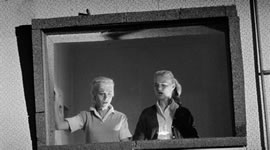 There's a fair amount of exposed flesh for a 1959 title for the female cast (since all the men in their tribe have been killed off), making this one a curio for fans of early taboo breakers if nothing else. On top of that the script was written by none other than Ed Wood, this was the debut feature for '60s sexploitation vet Peter Perry (Kiss Me Quick!, The Secret Sex Lives of Romeo and Juliet), and the score is recycled from The Astounding She-Monster, so it definitely earns its place as a weird footnote in the exploitation history books. Of course, it also turned out to be the first in a string of nudie westerns like Hot Spur, Fandango, Dr. Carstair's 1869 Love-Root Elixir, and Indian Raid Indian Made, among several others.

Sharing space on the otherwise no-frills DVD is Teenage Zombies, one of the earlier efforts from the cheapest drive-in filmmaker in the business, Jerry Warren (also infamous for titles like Man Beast, Terror of the Blood Hunters, and The Wild World of Batwoman). This one was previously released on DVD in a pretty atrocious transfer from Retromedia, so 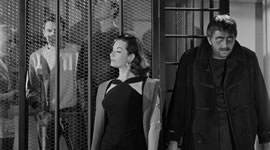 once again the Vinegar Syndrome disc is a major improvement all around. The red scare story follows the misadventures of four teenagers (Sullivan, Pepper, Murphy, and Albertson) who decide to take off from the local malt shop for some fun in the sun including boating and water skiing. They decide to scope out a nearby island that's been the subject of some pretty strange rumors lately, but they get more than they bargained for when they spy some zombies wandering 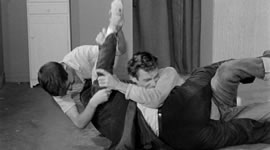 around in the daylight. When their boat suddenly disappears, the kids find refuge at the home of glamorous mad scientist Dr. Myra (Frankenstein Island's Victor), who proffers some Coke to the boys while the girls are terrorized by hunchbacked assistant Ivan (Niles). Soon all the kids end up in a cage at her lab, "a place of research and discovery where science is free from the interference of stupid politicians." When two pals show up looking for the missing youths and the U.S. military gets involved, all hell breaks loose on a very small scale with a furry gorilla on the loose for good measure.

Don't expect much zombie action here, but the junky charms of this film are plentiful as it reels out pages and pages of ridiculous "gee, whiz!" dialogue, a clunky soundtrack cobbled together with stock music from other '50s sci-fi films, and some juicy overacting from the villainous actors, not to mention "minimalist" sets that would get thrown out of most high school plays. Yep, this one's a keeper.