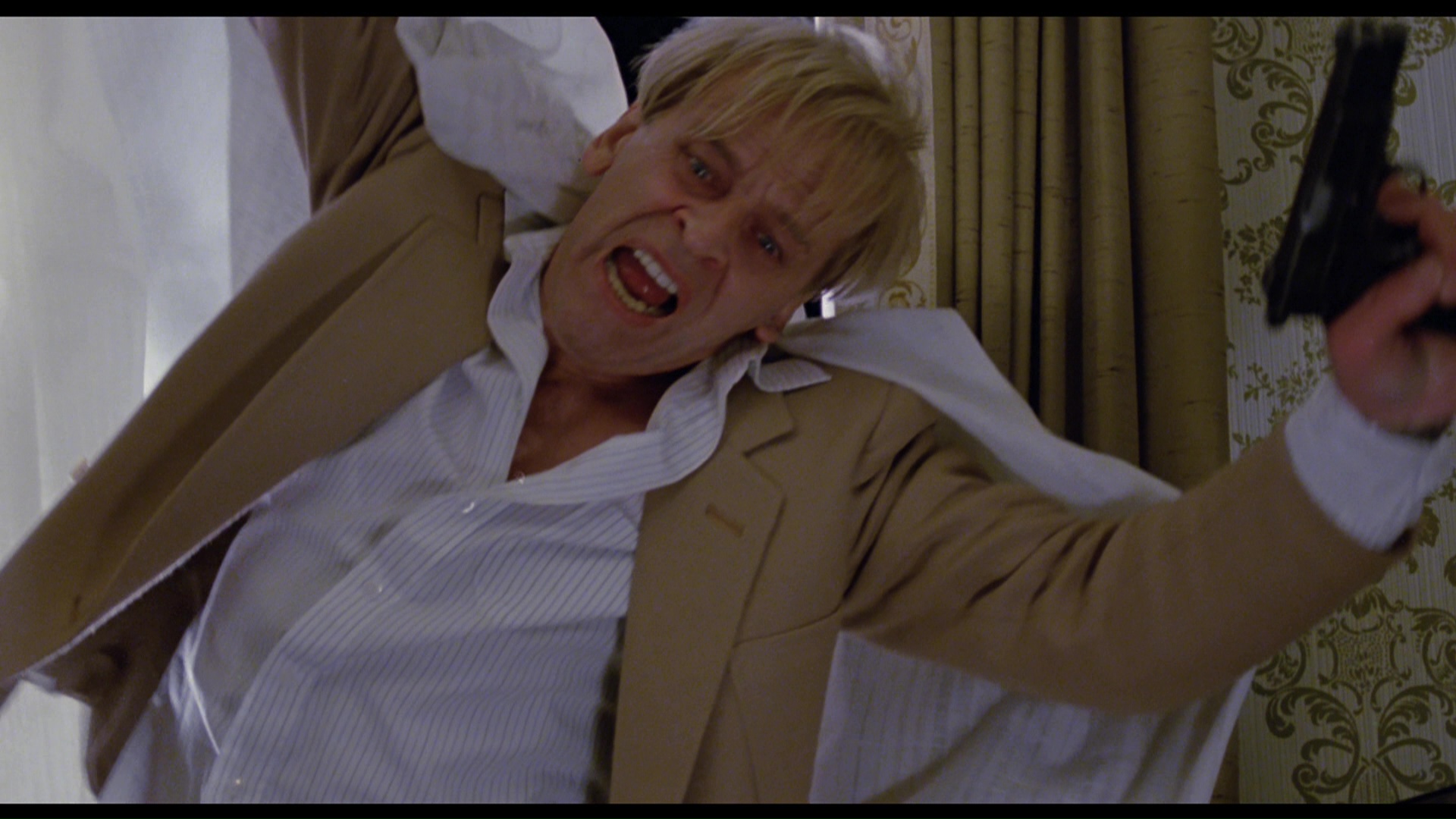 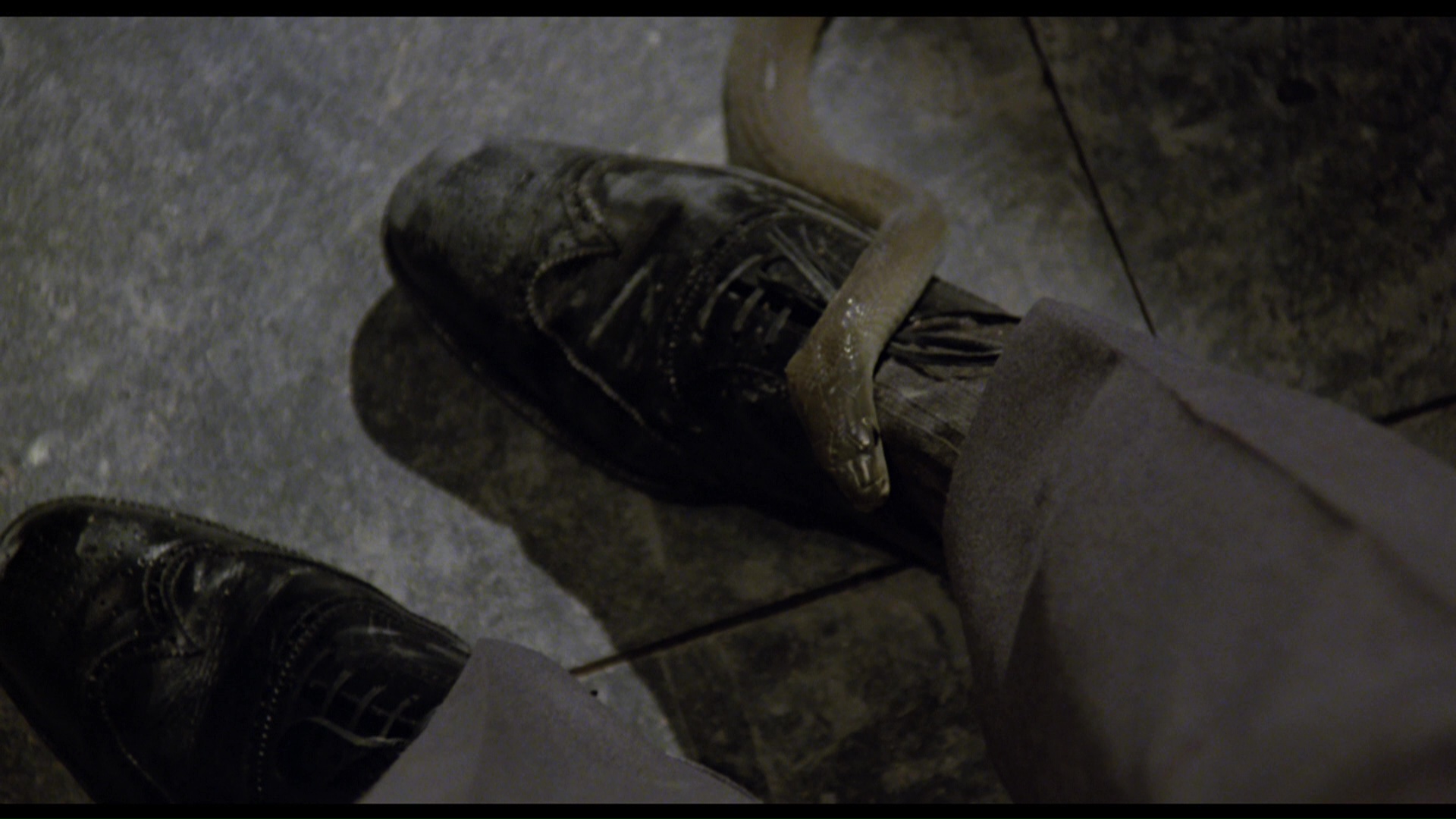 A solid nailbiter sold as a nature-on-the-rampage horror film, this crime curio with some tense black mamba action sports one of the strangest all-star casts of its era. Though virtually buried upon release (during a year crammed with superior genre fare), this adaptation of a potboiler by Alan Scholefield still stands up fairly well as a solid, low-key genre mix with some enjoyable scenery chewing from the biggest, most psychotic hams in the business.

While on vacation in England, American boy Philip (Holcomb) becomes the kidnapping target of a group of criminals: family chauffeur David (Reed), his nanny girlfriend Louise (George), and sadistic anarchist Jacques (Kinski). Alas, the scheme goes awry and, after the impulsive gunning down of a passing bobby, the group holes up in the boy's house with his macho grandfather (Hayden) and, unbeknownst to them, a deadly snake sent by accident from the pet store. The arrival of scientist Miles, the snake's intended owner, adds another hostage to the roster; meanwhile outside, the chief inspector (Williamson) tries to salvage an escape plan as the body count rises.

Obviously even a lousy film could wring suspense out of such a scenario; after all, the thought of an unseen snake slithering around air ducts and popping out from beneath 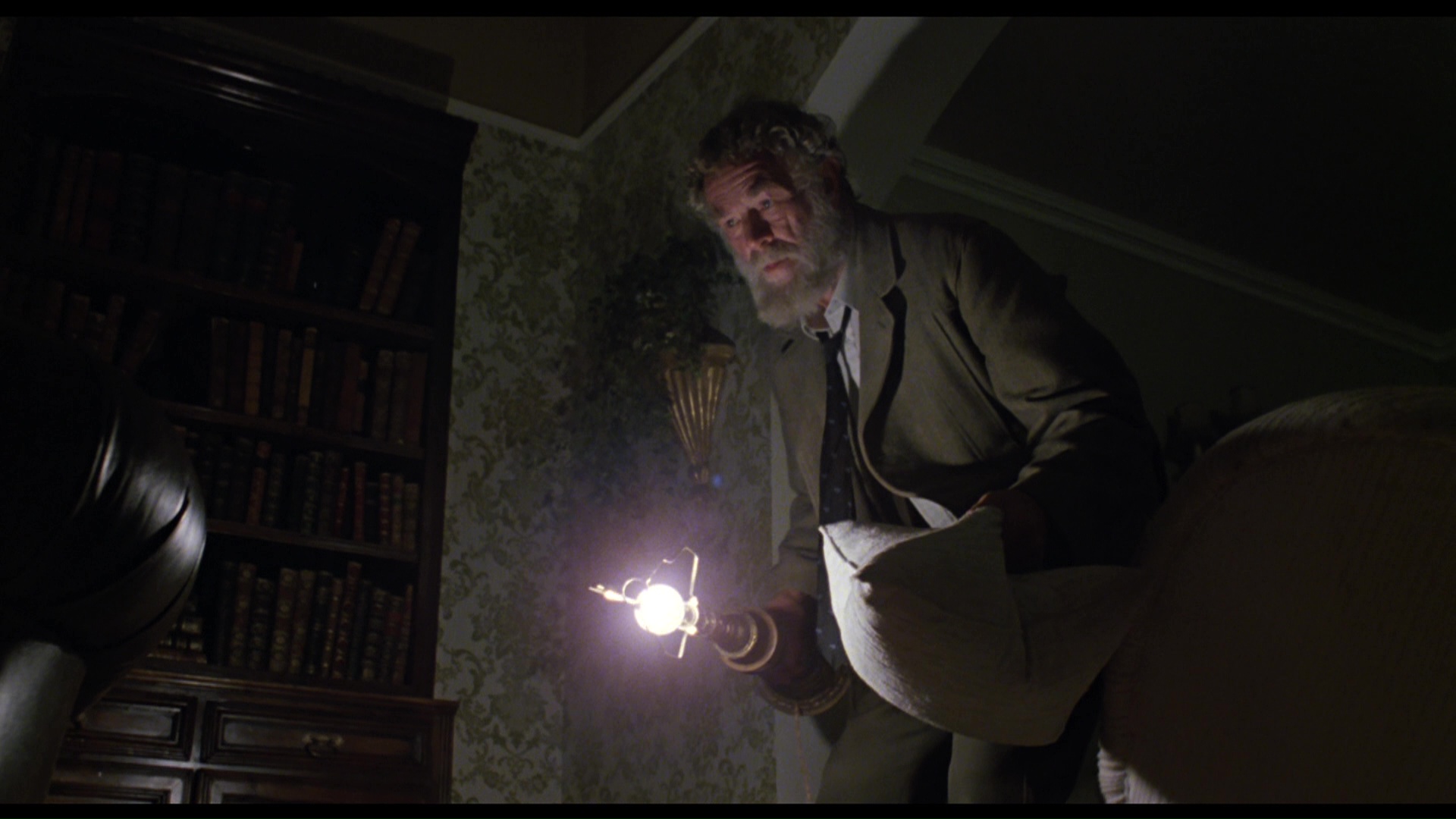 furniture and window curtains is enough to keep most viewers gripping their armrests. Fortunately Venom is more than competent with its material, thanks 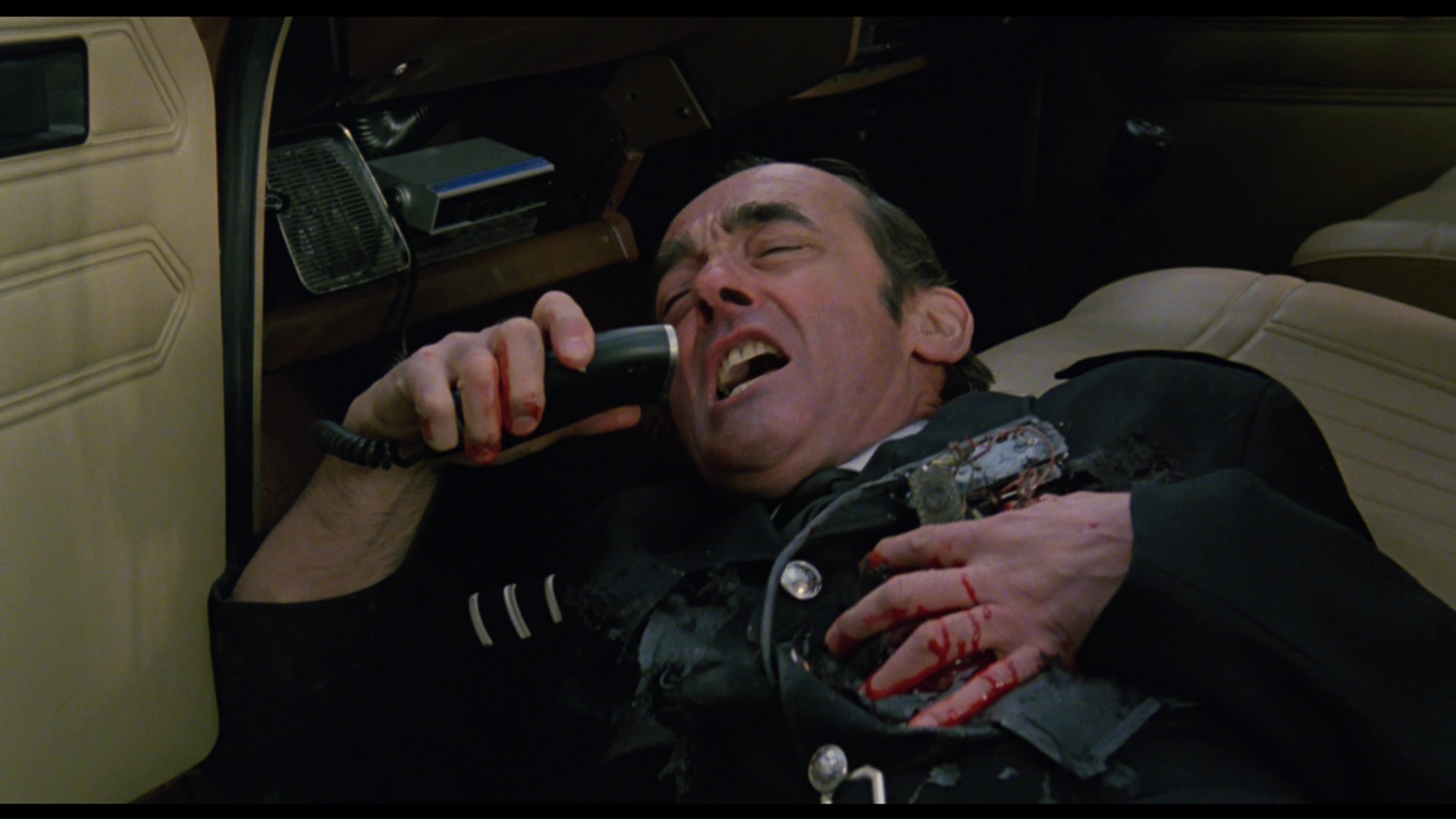 to efficient handling from director Haggard, a genre veteran from Blood on Satan's Claw and TV's Quatermass who took over after a week's shooting by Tobe Hooper. The result is an unexceptional but diverting piece of entertainment worth using to kill a slow evening; after all, the once in a lifetime teaming of volatile Reed (who did the much shoddier yarn Spasms the following year) and Kinski merits a look simply by itself, and as far as deeply troubled productions go, at least this turned out better than most.

Usually seen on cable and via Vestron's ugly VHS transfer for its first two decades of video life, Venom finally got a watchable presentation thanks to Blue Underground's DVD in 2003. The image quality is solid, with vivid colors and accurate framing (similar to but more polished than the earlier no-frills Australian release). Both the 6.1 DTS and 5.1 Dolby Digital EX surround mixes sound fine, with a 2.0 surround mix hewing closer to the theatrical mix; the snake attack scenes (complete with occasional POV shots, no less) benefit the most from the audio overhaul, but the nice early score by the late Michael Kamen gets a solid boost as well. Haggard appears from an enjoyable but low-key commentary track with moderator Jonathan Sothcott, covering all of the bases including his dissatisfaction with Hooper's footage, the multiple rifts between actors, and the difficulties of mounting such a complicated production on limited means. Other extras include the theatrical trailer (which plays up the snake angle, of course), four TV spots, a poster and still gallery (complete with press kit), and detailed bios for Reed and Kinski well worth reading. 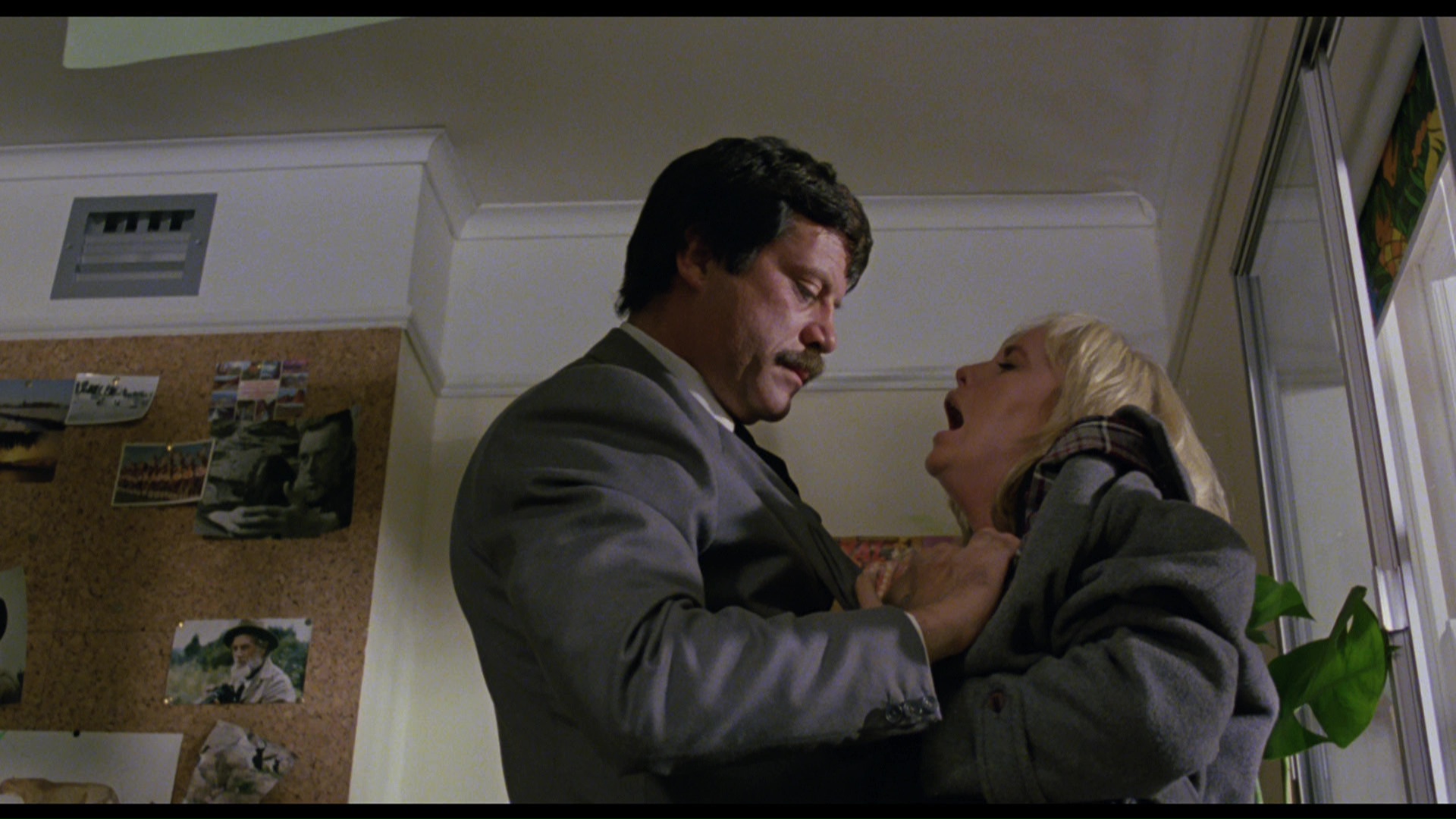 Well over a decade later in 2016, Blue Underground revisited the title for a Blu-ray release (in a dual-format pack with a remastered DVD as well). Everything but the bios is ported over, while a new, extensive liner notes essay by Fangoria's 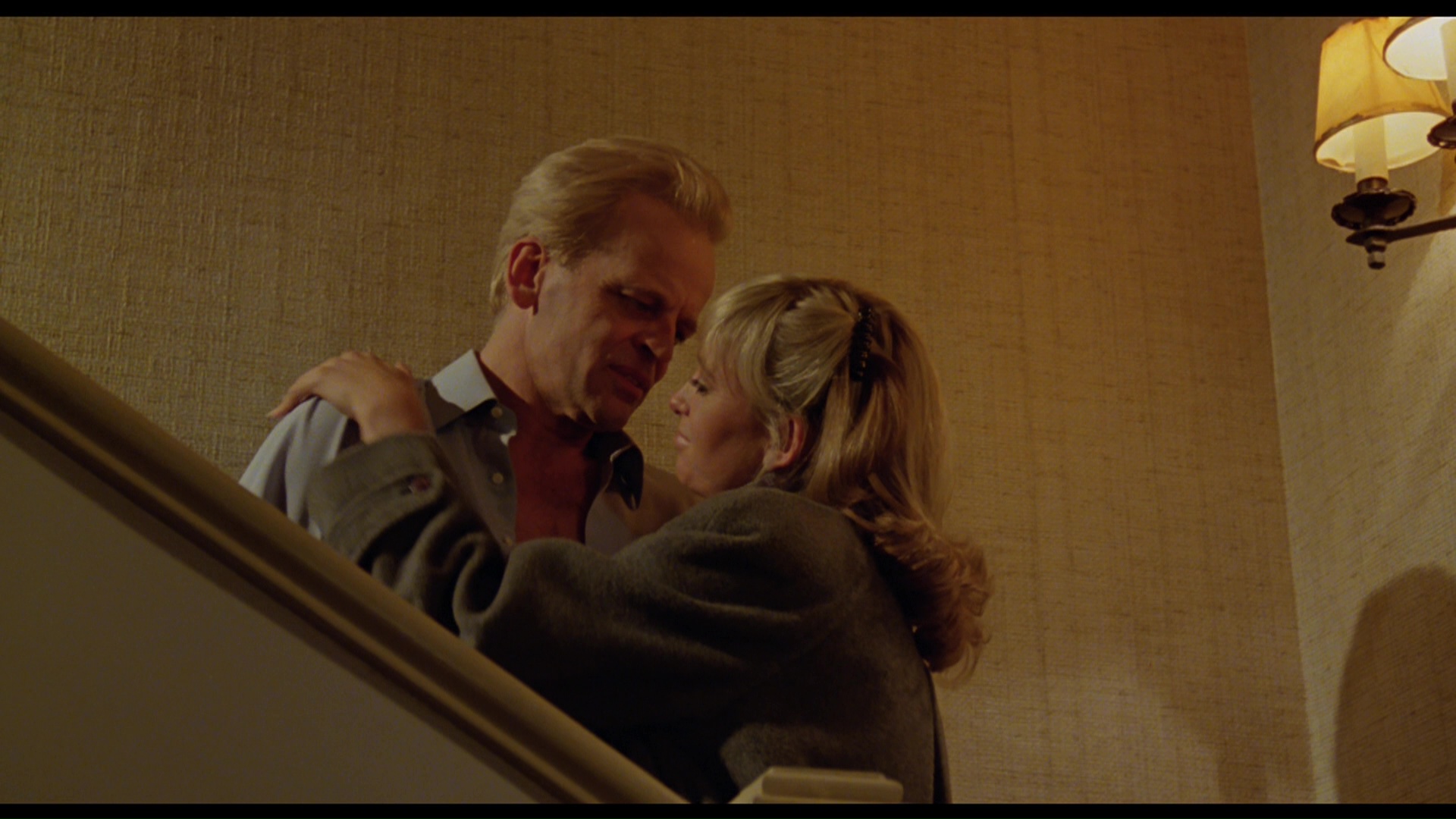 Michael Gingold is added as an insert booklet. (Don't miss the closing lines.) Audio gets a nice boost here with a 7.1 DTS-HD mix as well as the same 6.1 and Dolby Digital 5.1 and 2.0 options, with optional English, French, or Spanish subtitles. The new 2K HD transfer bumps up in all the expected areas with more natural skin details, heightened detail, and far less compression, though the SD version was nothing to sneeze at. It still isn't a razor sharp or aesthetically striking film; the look here is more drab and atmospheric than anything else, but it's much punchier than the drab Paramount prints or TV broadcasts by a significant margin. Anyone who's seen the film is bound to get a chuckle out of the new cover design, featuring a cowering, bikini-clad George in a pose promising something much sexier and more tawdry than anything in the actual film.