A rare psychological thriller that actually lives up to that label, The Vanishing (Spoorloos) crept up in English language art theaters over two years after its completion 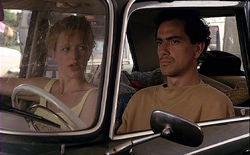 and quietly scared the bejeezus out of unsuspecting viewers. The film's structure and manner strongly recall the subdued, mannered suspense puzzles of Claude Chabrol, in which reality barely conceals the monstrous undercurrents of the human psyche, but here director George Sluizer goes one better by delivering a savage, emotional gut punch to the viewer including (but not limited to) the unforgettable final five minutes.

Vacationing Dutch couple Rex Hofman (Gene Bervoets) and Saskia Wagter (Johanna ter Steege) decide to take a holiday in France, and despite some minor squabbles about an empty gas tank, they seem perfectly happy. Rex even vows to never abandon Saskia, though this promise is put to the test when she mysteriously vanishes without a trace at a public rest stop. For three years Rex posts up signs and appears on television, doggedly searching for any clues leading to Saskia's disappearance. Rex turns down potential new girlfriends, instead obsessing over this tremendous unknown mystery in his life, and eventually his persistence pays off when Raymond (Bernard-Pierre Donnadieu) appears. A seemingly normal, happy family man, Raymond takes Rex on a road trip back through the past, during which flashbacks explain how Raymond's intellectually quizzical 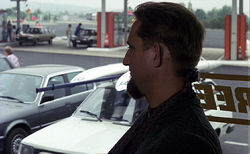 and perverse personality developed from childhood curiosity to full blown sociopathic tendencies. Only by hearing the whole story, Raymond explains, will Rex ever learn the truth about Saskia's disappearance, and ultimately the two men must test each other's wills to find true knowledge.

Totally devoid of any overt visual flashiness or stylistic tics, The Vanishing takes its time to develop its characters and establish how their interlocking psyches have led to such a dangerous, compelling situation. This is one of those haunting "car wreck" types of films, in which the occasional clutch of terror experienced while watching it is nothing compared to the delayed shock that kicks in an hour or so after viewing. (Angel Heart is another good example.) The three lead actors are all pitch perfect; though Donnadieu gets most of the standout moments with his quiet malignance, the two lovers are wholly convincing and establish enough of a bond to make the final resolution all the more powerful. Author Tim Krabbé does an expert job of translating his short but dense source novel, The Golden Egg, whose title relates to Saskia's dream and its symbolic implications in the final shot. However, this is 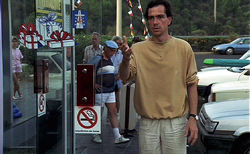 a rare instance in which the film betters the novel, turning a good story into a lean, precise, and ruthless screenplay. Unfortunately Sluizer agreed to remake this film under the same title for Fox, and the results (starring Jeff Bridges, Keifer Sutherland, Nancy Travis, and a young Sandra Bullock) pretty much trampled all over everything that made the original so potent and tacked on a gory, ineffective "happy" ending for good measure.

Though best experienced in a darkened, oppressive theater, The Vanishing translates to the small screen with most of its subtle, macabre touches intact. Criterion's DVD is a marked improvement over the earlier Image/Fox Lorber laserdisc and DVD, which was slightly cropped to full frame and suffered from a soft video transfer with mediocre contrast. The new anamorphic edition looks excellent overall, and while it can't quite conceal the film's low budget origins, the blacks in particular look greatly improved. The optional subtitles also do a more efficient job of conveying the language difficulties as the language swerves back and forth between French and Dutch, and the extra visual information on the sides provides some minor but greatly needed breathing room. Evidently the 102 minute Fox Lorber version was taken from a time-compressed PAL transfer, as the Criterion version clocks in with an additional four minutes but appears to be identical in content. Some festival screenings reported an original running time of 111 minutes, and despite claims of a longer print from some bootleg video companies, verification of the content in this extended edition is still pending. The DVD also contains the original European theatrical trailer, which adequately conveys the nature of the film without blowing any of its major surprises.