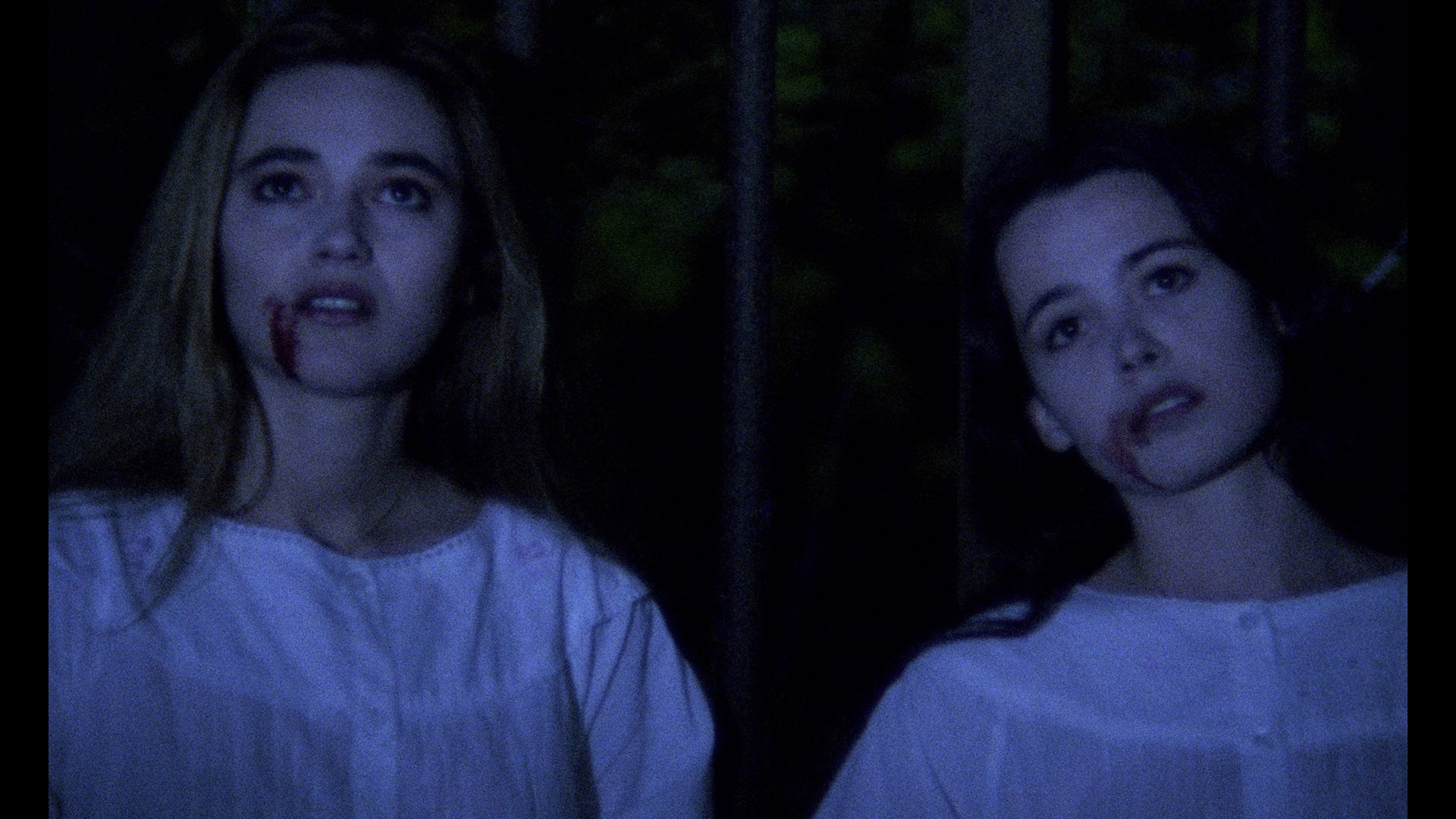 At the Glycine orphanage run by a group of nuns, two young girls have inexplicably gone blind. However, by night their sight returns... and like mischievous children, they return to the nearby cemetery, where they try to figure out how they died (due to "a mishap") and came back to prowl the earth. Believing they're 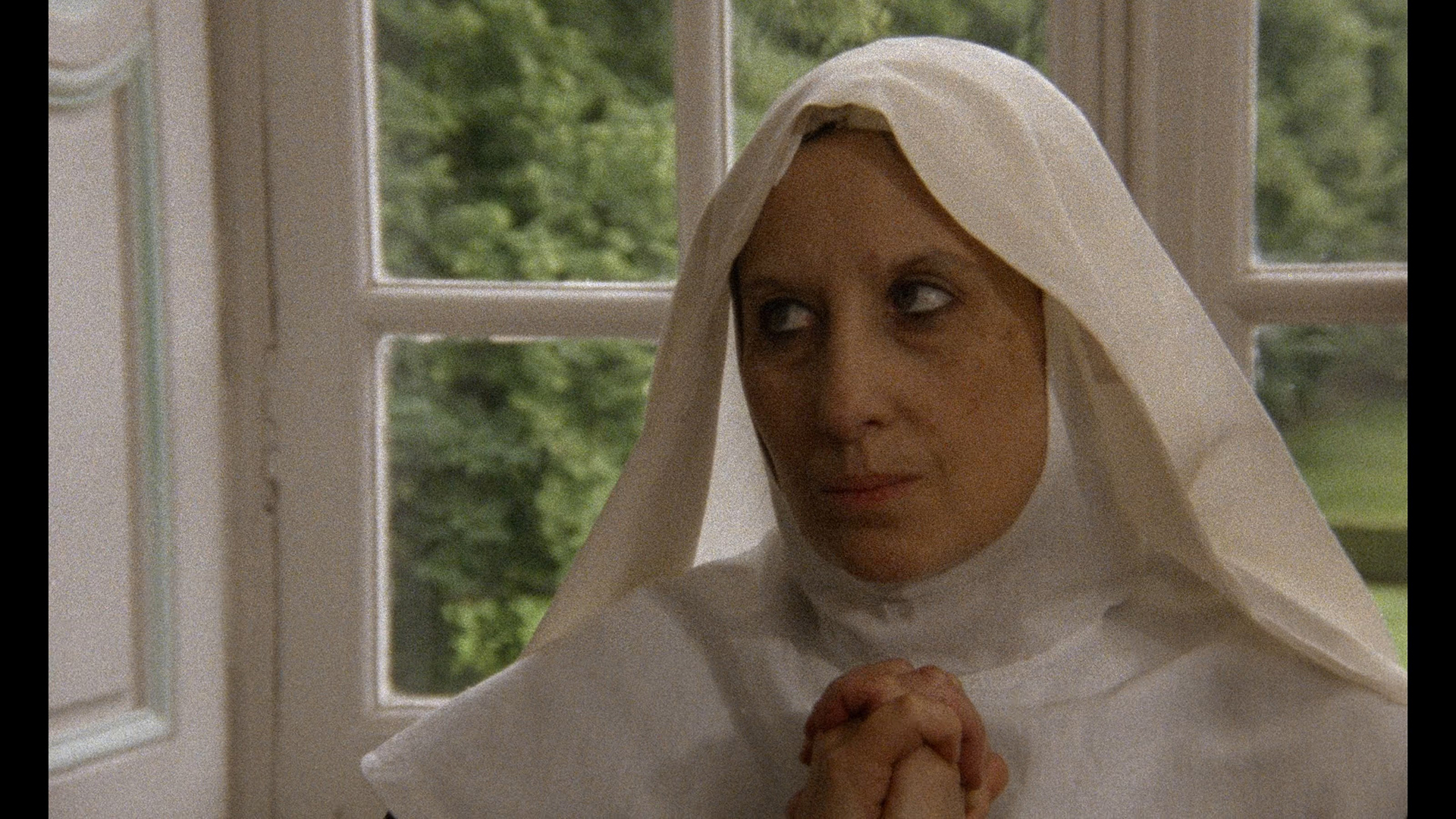 related to Incan gods after swiping a book from the library, they find blood from any sources available (including a dog) and meet other creatures of the night, such as a lonely she-wolf who lives in a railroad yard. The esteemed eye specialist who has been brought in to see them, Dr. Dennary (Charnacé), spirits them off to the big city where he acts as their new father and hopes to cure what he believes to be a psychosomatic illness, but things don't go quite as planned.

Unable to get financing for a project called The Return of Dracula in the mid-1990s, French horror director Jean Rollin embarked on a five-book series detailing the adventures of his two blind protagonists who encounter a motley crew of beasts and potential victims. The film came later, partially as a device to promote the books, and it wound up marking his first excursion back into traditional vampirism since 1975's Lips of Blood. This is easily the most "innocent" of his vampire cycle, eschewing any overt gore and containing only a fleeting bit of distinctly non-exploitative nudity. Here Rollin se 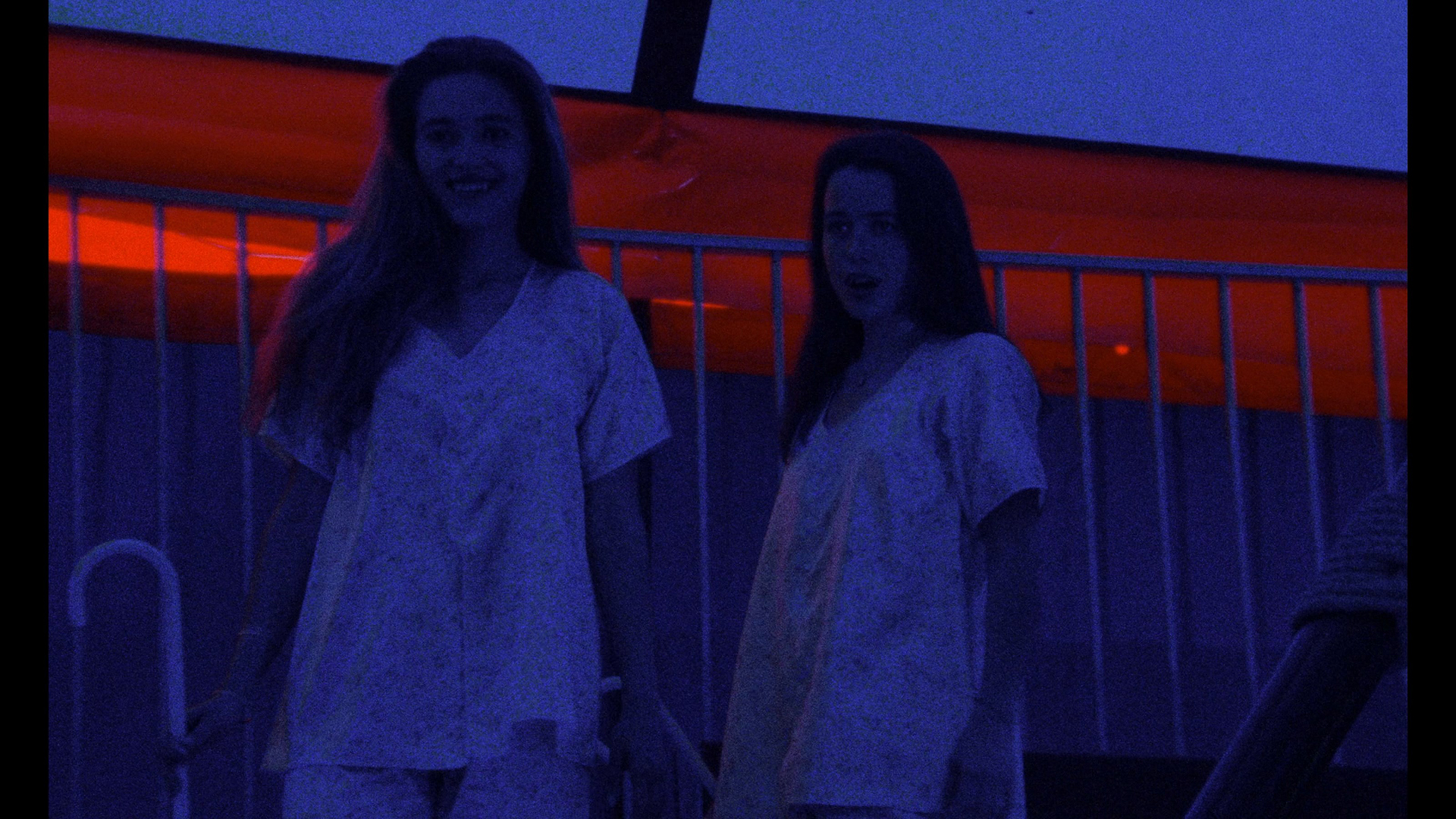 ems far more concerned with trying out new visual devices to suit his trademark obsessions, such as having the vampire girls only see in the colors of blue and black (which is why much of the film is filtered so heavily to look that way). He also reunited with the mesmerizing Brigitte Lahaie, an adult actress he brought to semi-legitimacy in The Grapes of Death, in a brief role as one of the girls' victims, while fiery '70s European star Tina Aumont (Torso, L'urlo) turns up here in an unexpected role as a mournful ghoul. However, most of the burden rests on the shoulders of the two young leads, both fresh from acting school and delivering the necessary mixture of dreamy curiosity and low-key bloodlust necessary for the roles.

Rollin's comeback horror film first appeared on DVD in 2002 from Media Blasters in a bitterly disappointing edition. Improperly transferred from a PAL master, it features heavy streaking and blurring whenever movement occurs onscreen. The prior VHS versions were terrible, too, and this one didn't offer much of an upgrade at all. The reframing of the 1.66:1 original (this was shot on 16mm) didn't help matters either, but at least that disc has interviews with the two female leads (both with heavy tans!), the alternate (horrendous) English dub track, the trailer, and the entire soundtrack by regular Rollin composer Philippe D'Aram. (The audio CD of the score was released as a bonus disc with the excellent Rollin book, Virgins and Vampires.) 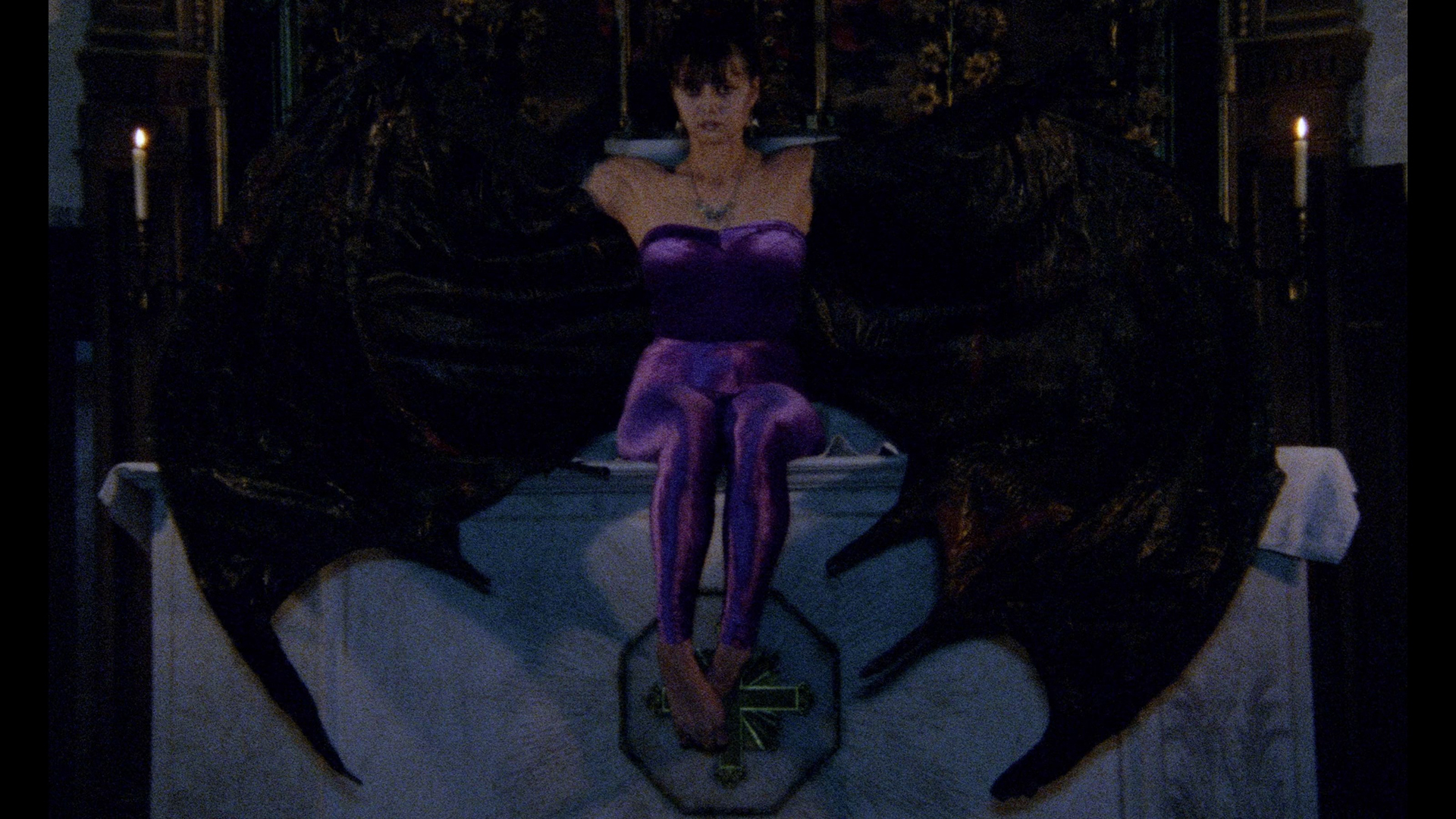 Pretty much anything would have to be an improvement after that, but fortunately the Kino Lorber release on Blu-Ray and DVD under the banner of regular Rollin home Redemption Films goes a few steps better than anyone could have expected. This film has always looked dreary and processed on video due to its origins, but here at least it feels much more like a traditional film thanks to the Blu-Ray's bump in resolution. There's honest-to-God natural film grain here now, and you can make out details that were simply a dull layer of slush on prior versions like trees and dress textures during the night scenes. Bear in mind that this is still a very cheap 16mm movie so it won't ever look particularly pristine (there's no significant clean up here, either), but it's so much more watchable than the old DVD it's not even funny. The restoration of the original framing 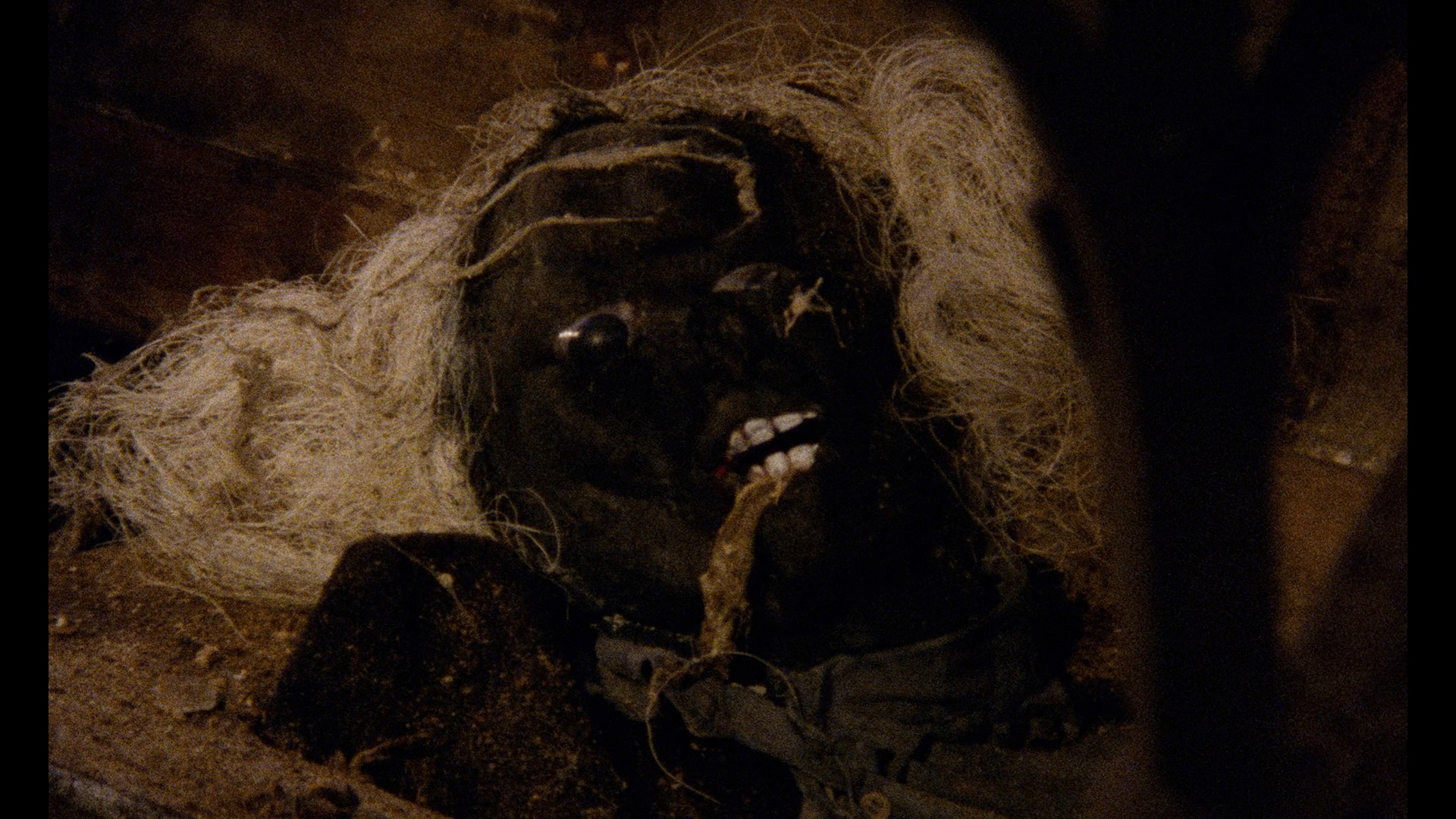 helps matters quite a bit, too, as does the fact that it now runs correctly at 107 minutes without the PAL speedup of the Media Blasters one. The score, which also sounded cheap and tinny before, benefits quite a bit from a far more flattering two-channel PCM mix; it sounds a lot more like Richard Band than D'Aram most of the time, but the improvement makes it much easier on the ears. That English dub is also included here, if you're so inclined. As with its release date companion The Living Dead Girl, trailers for both films are included along with The Rape of the Vampire, The Nude Vampire, Shiver of the Vampires, Requiem for a Vampire, The Iron Rose, The Demoniacs, Lips of Blood, and Fascination, while Video Watchdog's Tim Lucas supplies liner notes filled with trivia about both films along with some tantalizing parallels drawn between them.

The Kino Lorber edition also contains two substantial extras, beginning with the 42-minute "Memories of a Blue World." Teboul, critic Jean-Pierre Bouyxou, D'Aram, and other cast and crew members are on hand to talk about the making of the film from its literary genesis to Rollin's happiness with its warm international reception after the French press gave it hostile reviews. Teboul has some great stories including a mention of the three shots of whiskey she and Pic took before their (tame) nude scene, while other topics covered include a traumatic account of broken ribs due to heavy bat wings and Aumont's distress at arriving for filming only to learn to her horror that she'd learned the wrong role. The other major bonus is a 20-minute interview from 2008 with Rollin filmed in Paris; it's more of a general career overview with subjects beyond his films including politics, Georges Bataille, and collecting art. It's a fitting tribute to a filmmaker whose fantastic cinematic world has only grown more inviting since his passing.