The international breakthrough film for director Paul Verhoeven and actor Rutger Hauer, Turkish Delight joined a number of its European contemporaries by drawing in both the art house and sexploitation crowds. Of course, its wide availability mostly in dubbed, 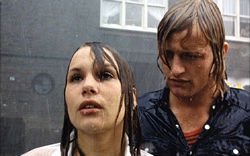 edited prints didn't help its reputation over the years, its Best Foreign Film Oscar nomination notwithstanding, but the damage done by countless public domain editions over the years has finally been kept at bay by a disc that allows one to appreciate just how extreme and affecting the film remains to this day.

The fractured opening sequence introduces us to Eric (Hauer), a petulant sculptor suffering a breakdown apparently related to a young woman, Olga (Monique van de Ven), whose photograph he keeps handy for a variety of purposes. After wallowing in a series of violent fantasies, he eventually recovers 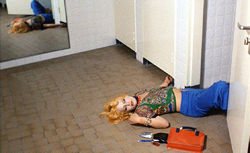 from his slump and engages on a wild round of purgative sex. In flashback we learn the full story about how he and Olga met and began a passionate, extremely physical affair, with highlights both comic (an encounter between Eric's manhood and a jeans zipper) and tragic (a car accident), as the two come to grips with family interference, living together, and other obstacles posed by day to day life. Fate intervenes with a nasty twist, leading to a series of jolting and eventually poignant revelations which bring the couple to their predestined end.

Verhoeven fans will be the most receptive audience to Turkish Delight's anarchic blend of emotions, body functions, and seemingly nonstop sex scenes; though it doesn't go completely over the edge like the later Spetters (sadly still missing in action on DVD), this is still taboo stretching material today, even by European standards. The full throttle, exhibitionist performances from both leads ground what could have been a sappy, incoherent jumble of a story, and Hauer fans in particular will be astonished to see how the familiar laconic matinee idol got his start. His other borderline softcore films 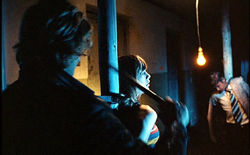 (like Dandelions or Verhoeven's Keetje Tippel, more of a showcase for van de Ven) aren't humiliating by any means, but this is by far the best of the bunch.

The most obvious attribute of Anchor Bay's DVD is the presence of the original Dutch language track with optional English subtitles. For anyone who ever had to suffer through the dubbed VHS releases, this is a welcome relief for the ears. Several shots which were either shortened or deleted entirely from many U.S. prints are now back in their proper place, including a relatively innocuous bit of doggie relief that predates John Waters' Pink Flamingos. The image quality is about as fine and detailed as one could expect given the source; it's certainly the best this film has ever looked, and the tricky color schemes (lots of brown and orange) come through just fine. As with most of his other films, Verhoeven chips in directly with a commentary track in which he recalls in fine detail the making of the film and describes the social conditions under which it was made. As usual he doesn't pull many punches and displays a mordant sense of humor; it's a shame his dangerous talent has been largely kept in check in recent years with filler like Hollow Man. The Dutch trailer is also included, though an American one would have been an amusing bonus, too, if one still exists.