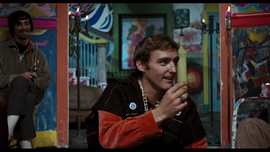 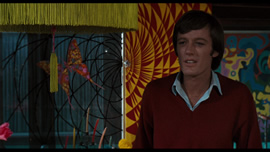 One of the first and best psychedelic drug movies, The Trip is usually thought of as a colorful time capsule that launched a slew of drugsploitation films from AIP and numerous sexploitation filmmakers well into the '70s. That may be, but today it's far more interesting as one of the purest Roger Corman films, an undiluted visual extravaganza fusing his recent non-judgmental look at the biker counterculture in The Wild Angels with his more ornate tendencies seen in the Vincent Price / Poe films, particularly their surreal nightmare sequences. Corman's efforts to make some heady art films under the noses of American International Pictures were already quite obvious thanks to films like Masque of the Red Death and X - The Man with the X-Ray Eyes, but here he allowed himself to really cut loose with an orgy of color, rapid-fire editing, and general sensory overload that defined the depiction of acid trips on film for years to come.

While working on a shoot in Big Sur, commercial director Paul Groves (Fonda) finds himself at a crossroads when his wife, Sally (Strasberg), shows up irate at its absence from their divorce proceedings. Desperate for a new direction in his life, Paul turns to his guru buddy, John (Dern), who knows just what the poor guy needs: a nice, healthy LSD trip. That may be just a few notches above the advice Edwige Fenech gets in All the Colors of the Dark to solve her marriage problems (join a satanic cult!), but Paul decides he's game and goes to a local "in" party 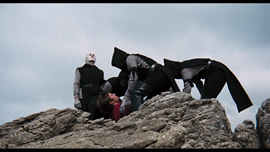 where they score some acid from Max (Hopper). Then it's off to the races as Paul gets his consciousness expanded by everything from an orange to the machines at the nearby laundromat (the wittiest and most memorable scene), with Max turning up inside his trip and John working from the outside to guide him all the way through. 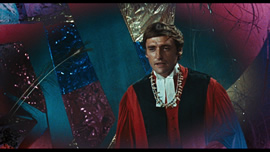 Strasberg barely shows up enough to count as a supporting player, this is really Fonda and Dern's show all the way with the latter turning in a compelling and unexpectedly potent performance. Corman's ambitious visual schemes are obviously limited by his legendary frugal budgeting, but the film avoids kitsch for the most part and makes the interesting choice of decorating Dern's beach side home in an array of vibrant patterns and colors that segue in and out of Fonda's trip, a neat visual idea that you'd think would have been imitated more often. If you couldn't tell this was a Corman film already, the script was written by a young Jack Nicholson (who would pen Head the next year) with fun roles going to Corman mascots Luana Anders, Dick Miller, and Barbara Morris. Keep an eye out for a young, pre-Beyond the Valley of the Dolls Michael Blodgett in one trippy love scene, too. Adding to the fun is a beautifully spacey soundtrack by Electric Flag (weirdly credited as The American Music Band), which has yet to receive a legit complete release anywhere outside of vinyl.

Unfortunately AIP took a decidedly square attitude to Corman's opus and meddled heavily without his knowledge after he turned in his final cut. An alarmist disclaimer was added at the beginning, some tinkering took place with the TV broadcasts in the 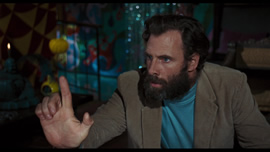 background, and most destructively, an optical cracking effect was added at the end to imply that Fonda was permanently damaged by his experience. That's a far cry from the neutral stance taken by Corman (who tried LSD once and had a positive experience while prepping for the film), and alas it turned out to be a harbinger of things to come with AIP continuing to alter his work until they parted way after Gas-s-s. Even the marketing took a finger-wagging stance with the posters tagging it "A Lovely Sort of Death," which has nothing to do with the film at all.

Despite the unintended moralizing, The Trip turned out to be a hit and inspired several druggy films including another much-loved AIP follow up, Richard Rush's Psych-Out (reteaming Dern and Strasberg, with Nicholson 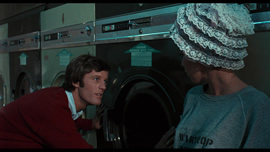 stepping in front of the camera). The two films were paired up for their DVD bow in 2003 from MGM, both in their AIP theatrical cuts and featuring some fun bonus features (more on that in a minute). Several years later, Corman's original director's cut of The Trip was uncovered and made its world debut on the MGM HD channel, while Rush's longer 101-minute cut of Psych-Out was revived at the same time (though it had previously been seen on VHS). Psych-Out got an American Blu-ray release from Olive Films in a no-frills edition of the complete cut at the beginning of 2015, while the end of the same year saw The Trip premiere on Blu-ray from UK label Signal One.

Though it's mentioned nowhere on the packaging, this Blu-ray is indeed Corman's original cut, marking its first commercial availability in any format. The film definitely plays better this way and seems quite a bit less dated, with Fonda's performance in particular 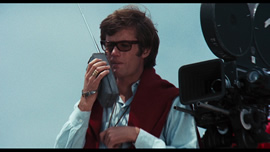 making more sense without that ridiculous imposed ending. Corman's sedate audio commentary from the DVD has been carried over here, but in a nice touch, his comments about the theatrical opening and closing have been removed and included here as extras (which can be watched with the original audio as well). Corman seems to be in much more energetic form in the making-of featurette from the DVD, "Tune In, Trip Out," which spends 17 minutes covering the production with additional recollections from Dern and cinematographer Allen Daviau. Corman goes into great detail about his own LSD trip and has some funny comments about Nicholson's script (which was good but had some visuals that couldn't possibly be realized on their budget), while Dern relates his own lack of awareness of drug culture at the time (his own vices were Coke and donuts) with Nicholson filling him in on the details. Daviau also turns up separately in more depth in a featurette about the film's psychedelic film effects (achieved via real-life rock show lighting designers), while a "Psychedelic Light Box" bonus is basically those sequences strung together for a colorful psych show. Also included are the original trailer and a gallery of posters and stills.