Marcia Brady swears and gets naked! That's the primary claim to fame of Texas Lightning, one of the most tonally-confused drive-in films ever made 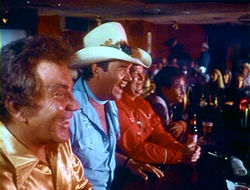 and certainly an obscurity that will leave most audiences baffled. Cameron Mitchell and his son, Channing (who later went by "Cameron Mitchell, Jr." in various roles) carry most of the story as macho redneck Karl Stover and his more sensitive son, Buddy, who are often at odds over what constitutes being a man. Karl and his equally piggish buddies decide to haul the boy out to the mountains for a weekend of hunting, which will also involve drinking and picking up barmaids. When Buddy takes a shine to country-singing beer-slinger Fay (The Brady Bunch's McCormick) and takes her back to the hotel room for a roll in the sheets, Karl's pals decide to crash the party and gang rape Fay. Needless to say, the rest of the trip doesn't go so well as Buddy figures out those rifles might come in handy for teaching the yokels a lesson or two.

Texas Lightning began as a pet 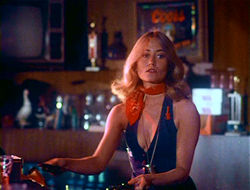 project for writer/director/cinematographer Gary Graver (who also turned out numerous adult films during the 1970s), who conceived of a harsh rural drama similar to fare like Macon County Line entitled The Boys. Unfortunately the film was controlled by Film Ventures International, the notorious and often-sued distributor of such films as Beyond the Door, Grizzly and the ill-fated Great White. The company's founder, Edward L. Montoro (who later fled with the company's money in the 1980s and vanished from the face of the earth), decided the film would be more successful as a hillbilly romp and ordered reshoots to inject some Dukes of Hazzard-style yucks. Of course, this means that the end result is basically a rollicking, feel-good story about spousal abuse, alcoholism, rape, and attempted murder. Yee-haw! Though the film managed to do decent business on the drive-in circuit (and later as an early VHS release from Media Home Entertainment), it never made a huge impression beyond celebrity skin fans who couldn't get enough illicit Brady thrills after seeing Eve Plumb strut her jailbait-hooker stuff in Dawn: Portrait of a Teenage Runaway. The infamous nudity is actualy very, very brief 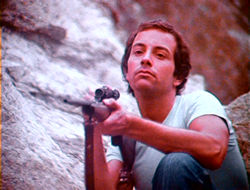 (involving Fay's low-slipping nightie during the hotel sequence), and overall McCormick acquits herself quite well, even when her role ceases to make any sense whatsoever during the tacked-on happy ending (which was heavily doctored to swerve around the fact that several characters were obviously intended to die in the original script). The two Mitchells perform well enough together, though Channing looks a bit long in the tooth to be an inexperienced callow youth on the brink of manhood.

Released under the banner of Media Blasters' "Guilty Pleasures," Texas Lightning is pulled from an open matte theatrical print that zooms in well enough to 1.85:1 framing on widescreen monitors. The picture is crisp and colorful enough but a bit too dark, and the entire film looks quite grainy. Considering how soft previous versions look, it's impossible to say how much of this can be attributed to the original cinematography. Don't expect much, but it is a step up from anything out there before. Graver's original cut still remains MIA (due to presumably impossible legal obstacles), but eagle-eyed viewers should be able to figure out how the story was originally constructed by reading between the lines in the unbelievably messy final half hour. Extras include a newly-created promo trailer and previews for other titles in the same line including Hell's Bloody Devils, Girls Nite Out, Somewhere Tomorrow and the utterly bizarre Banned.