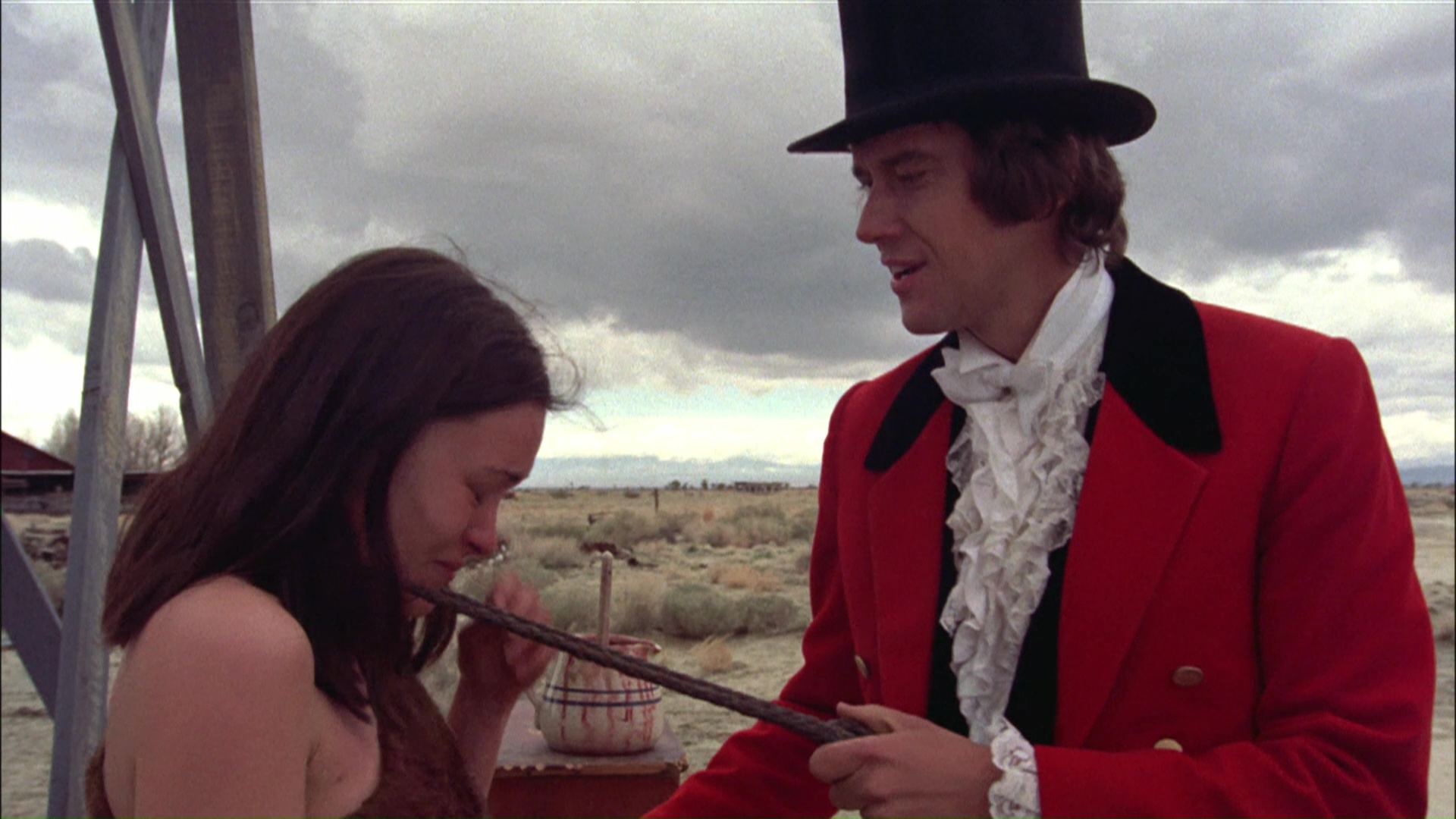 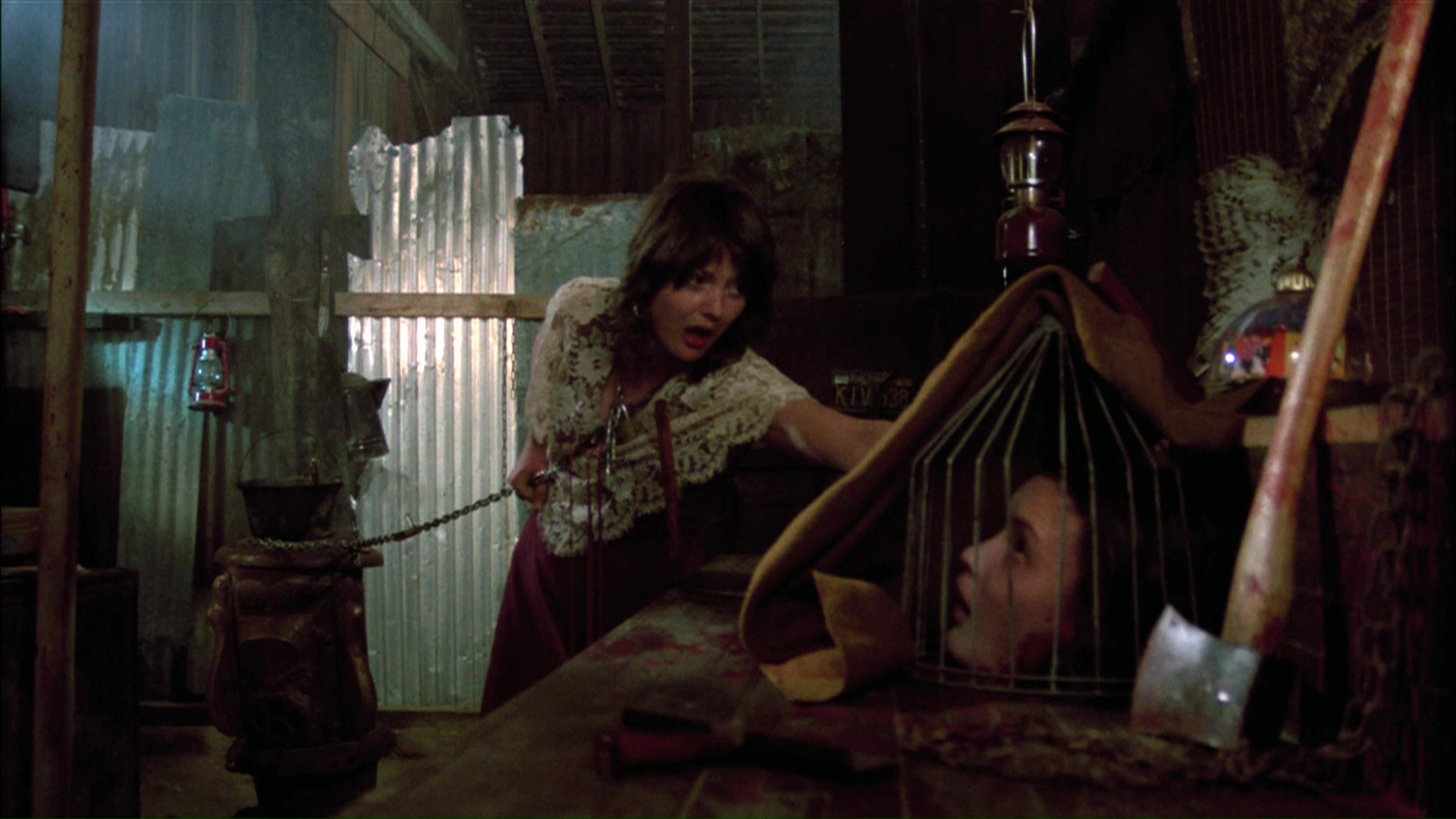 Featuring a similar setup to the same year's The Texas Chain Saw Massacre with about .0002% of the scare value, Terror Circus has long haunted drive-ins and video shelves under numerous alternate titles including Nightmare Circus, Caged Women and, in its most notorious and mistitled form, Barn of the Naked Dead. The film also experienced a spike in interest value thanks to the fact that its director, Robert Altman protege Alan Rudolph, finally hit the critical big time in the mid-'80s with art house hits like Choose Me and The Moderns, not to mention some seriously odd side projects like Roadie, Endangered Species, and Mortal Thoughts. Rudolph frequently disavowed this film along with its predecessor, his odd debut entitled Premonition, with some critics even suggesting they were directed by a different Alan Rudolph entirely. Well, it's the same Alan all right, though you'd have to be psychic to guess it judging from this stark, desolate, sleazy little curio.

The story's your standard chestnut about three girls driving through the middle of nowhere who wind up in big trouble, and in this case our three protagonists are wannabe showgirls named Simone (Thiess), Sherri (Alberoni), and Corinne (Roland). Their trek to Vegas gets waylaid when their car breaks down, leaving them stuck out in the middle of the desert. Help arrives in the form of Andre (Prine), who takes them out to his farm where he keeps a caged cougar around for company. Unfortunately the snooping girls stumble on his big secret, namely a bunch of women chained in his barn for a twisted circus routine with his prisoners as animals. Our three little showgirls wind up becoming the newest main attraction, while their suspicious agent and the local police start searching for the missing ladies. Oh, and there's something very strange, very big, and very ticked off lurking in the nearby outhouse... 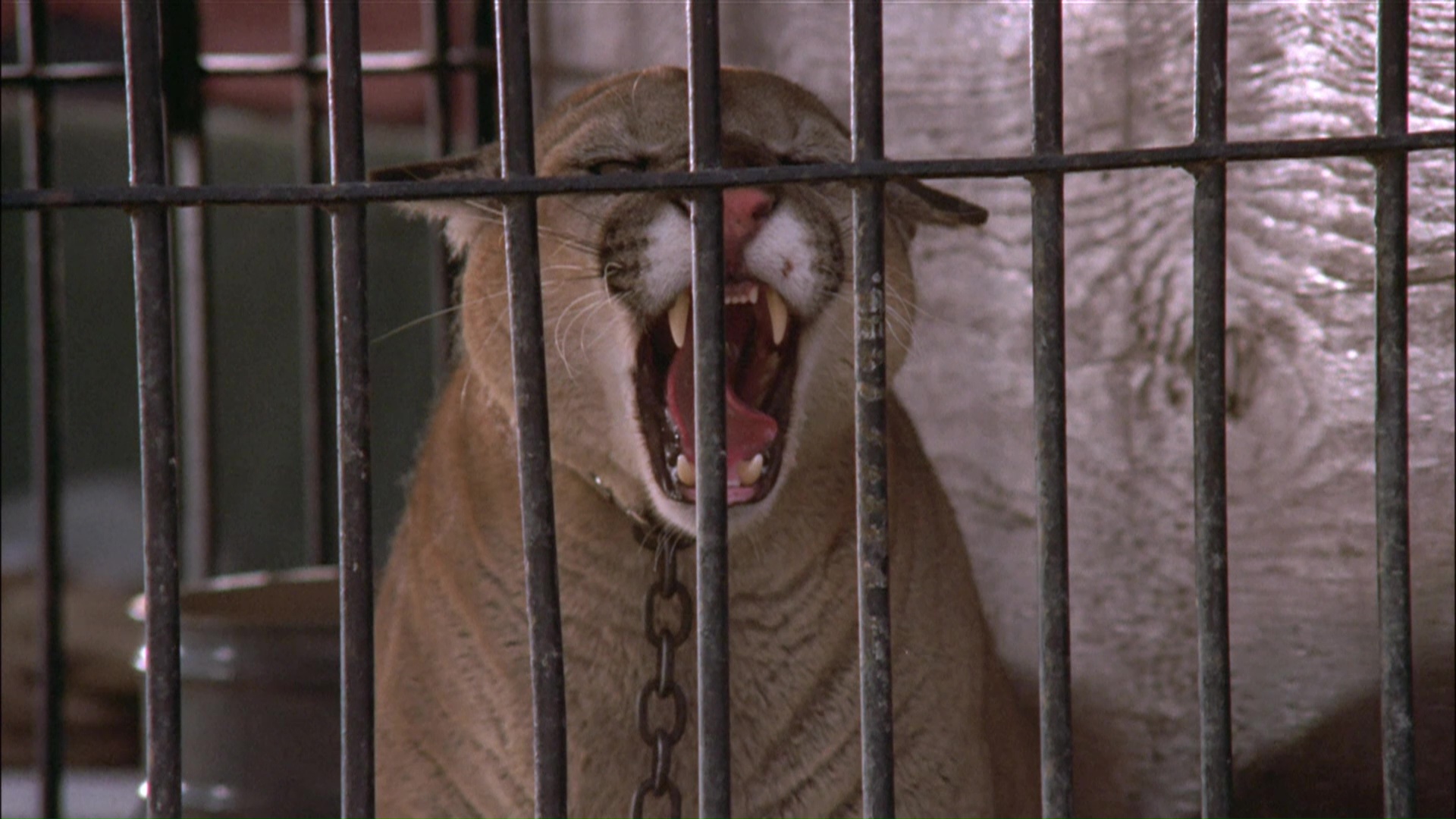 Though there isn't much in the way of blatant skin or gore to be found here, fans of degenerate '70s horror should still enjoy the antics of the always watchable Prine, a busy cult favorite who specialized in oddball horror films like 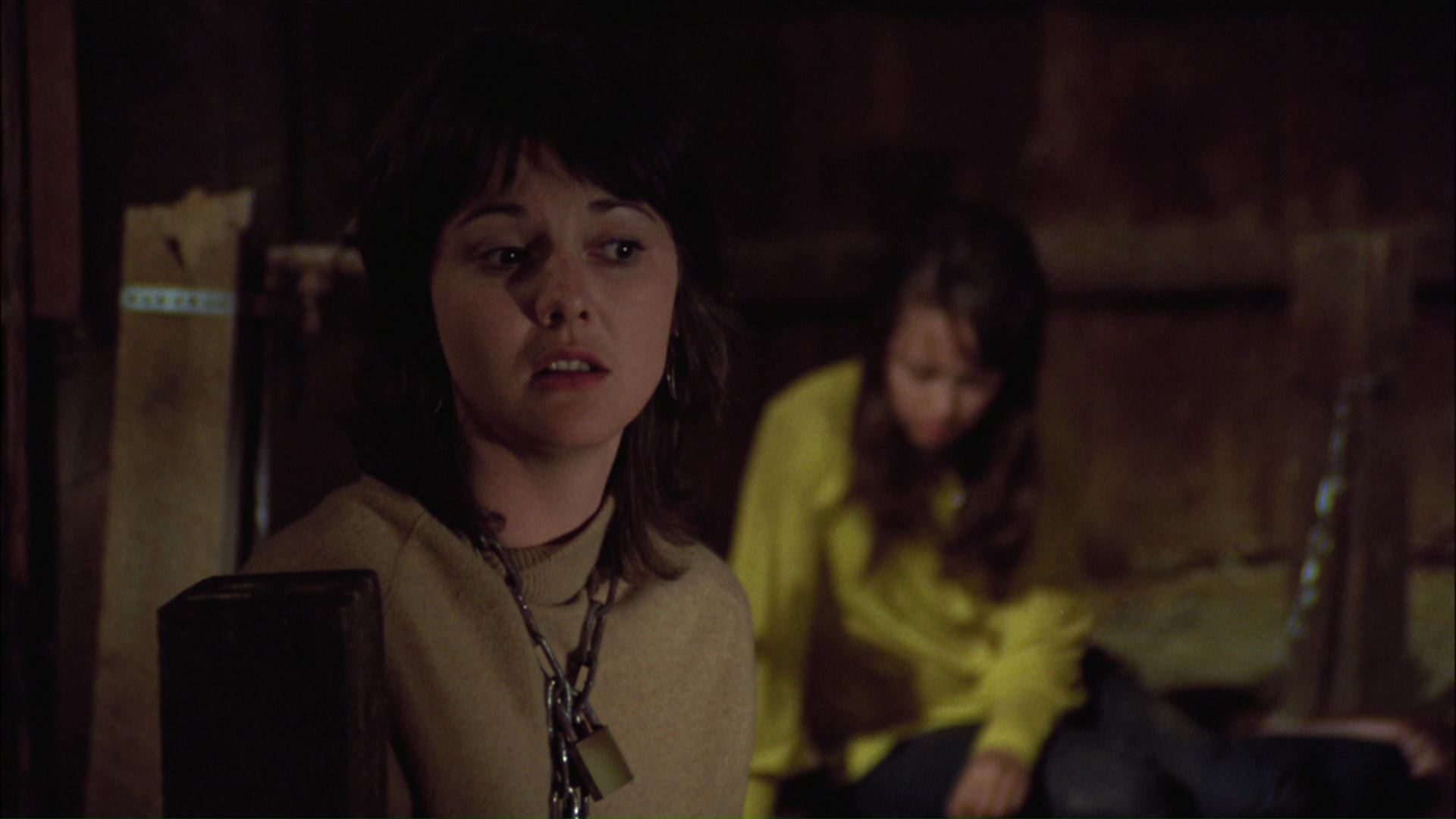 The Centerfold Girls, Simon - King of the Witches, Grizzly, and The Town that Dreaded Sundown. He was already a seasoned TV name (and occasional Disney feature player!) by the time he made this film, but God bless him for having the cojones to play shaggy-haired psychos in movies like this. Whether wrapping a boa constrictor around one of his "animals" or doing his circus routine in a top hat and coat, he's definitely the star here with none of the actresses having a prayer of matching him. On the other hand, Rudolph shows pretty much no affinity for the horror genre at all, preferring instead to let his camera soak up the arid locales and linger on pregnant, meaningful pauses between the actors. These directorial tics served him well enough in "mainstream" fare like Welcome to L.A., but here you'll just be itching for him to get to the good stuff already.

So many dreary-looking copies of this title have appeared on VHS (not to mention a dodgy Legend House release that basically slapped a letterbox matte over one of those blurry, faded old masters) that many have assumed over the years that this film was simply flat-out ugly from the day it was born. Surprisingly, Media Blasters produced evidence to the contrary with its 2009 DVD release from the original negative (under the Terror Circus title), a real stunner that looks like a different film entirely. Incredibly vivid and sharp, the transfer features rich, vibrant colors and looks like it was shot yesterday, with only a few very fleeting glimpses of negative dirt giving the game away. The mono English soundtrack is a huge step up as well. 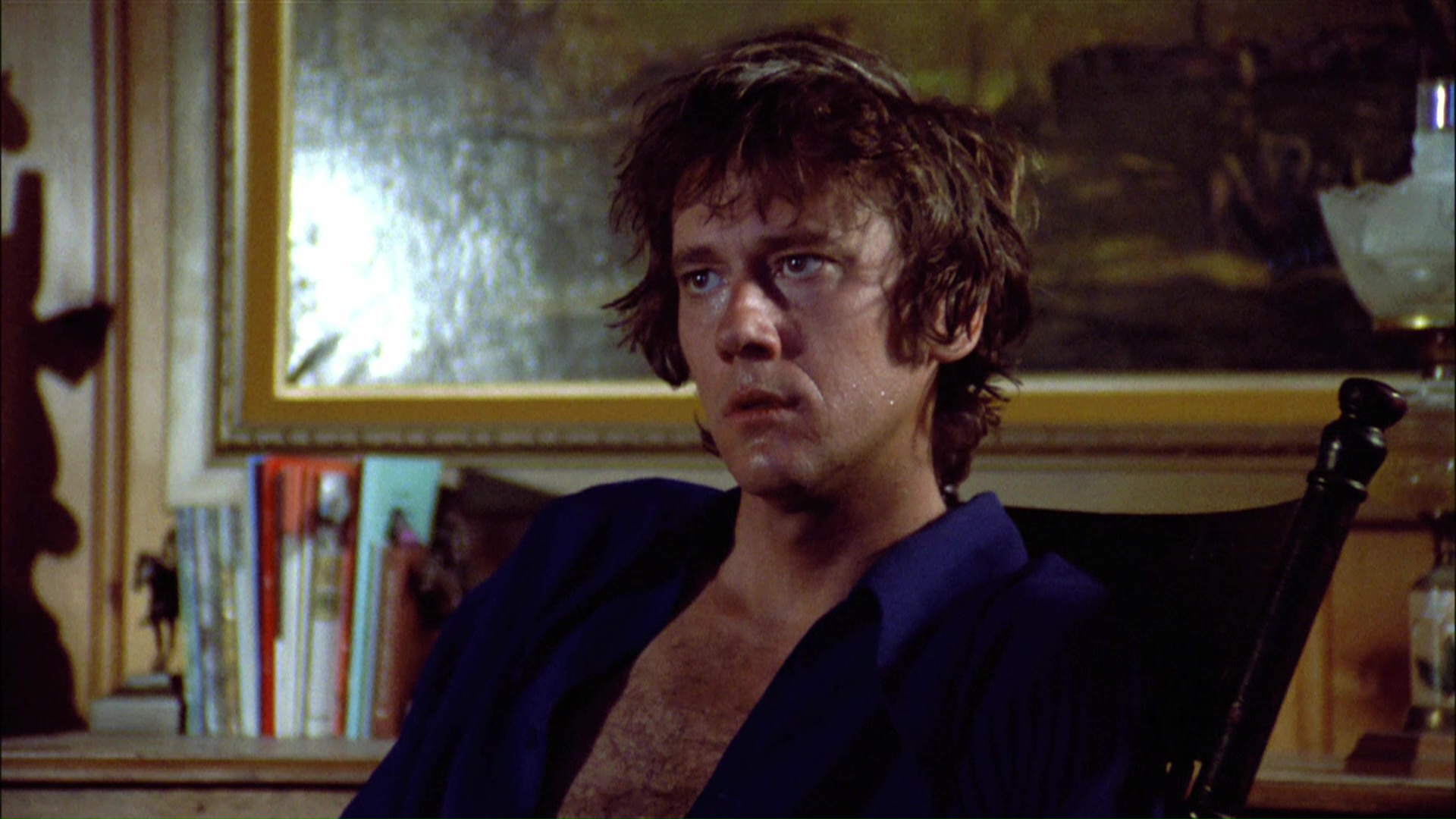 Given Rudolph's refusal to acknowledge this film, it's up to the rest of the talent to provide the extras here. Special effects artists Douglas White and Byrd Holland carry a feature-length commentary by themselves, chatting a lot about the director and leading man along with details about the various make-up FX (with the biggest one saved for the grand finale, of course, in which we finally meet Andre's radiation-damaged daddy). Also included is a 24-minute featurette, "Barn Again: Returning to the Terror Circus," in which both gentlemen return for a more generic overview of the film, interspersed with comments from costumer Alan Apone (whose work must have been pretty easy given the limited number of performers), Centerfold Girls co-star Jennifer Ashley (who has a small role here), and audio snippets from the associate producer, Marvin Almeas. You also get the alternate Barn opening title sequence, a promotional art gallery, a Terror Circus theatrical trailer apparently pulled from a negative with missing audio (so music from the feature itself fills in the silence), and additional Media Blasters trailers for equally disreputable releases like Blood Shack, Love Me Deadly and another VHS-era favorite, Psychos in Love.

In 2016, Code Red revisited the title as a limited Blu-ray edition sold through Screen Archives. The already excellent source material looks even better here, with flesh tones and vibrant blue skies looking especially good and the darker barn scenes now revealing more detail than ever in the shadows. It's tough to imagine this one looking any better than this, right down to the blazing red on Prine's lion tamer jacket. The DTS-HD MA mono audio sounds pristine as well. None of the extras from the prior release are carried over apart from the "Barn Again" featurette, though you do get the option of watching it with hostess Katarina Leigh Waters goofily providing facts and figures about the production while wearing a very appropriate circus-themed outfit.