You know the routine: ten people are invited to an island for the weekend, an unseen host informs them that they are all criminals who will be executed, and one by one they're 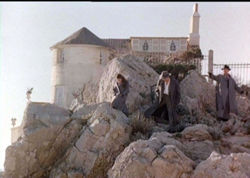 killed off, leaving a handful of survivors to deal with the confounding puzzle.

Set in the 1930s and lensed with a moody, gray-tainted palette, this version (originally titled Desyat negrityat) drops the witty, tongue in cheek approach which characterizes the other cinematic variations. Here the characters are haunted by their dark secrets, the deaths are shocking and painful, and in a movie first, the story winds up with the original nihilistic coda from Christie's novel, not the happier resolution of her play version which other directors preferred. The decision to go downbeat is a courageous one and pays off in some interesting surprises, particularly the eerie final shot. Surprisingly this version also ratchets up the exploitation factor; the first death (a poisoning at dinner) climaxes with the victim taking a gory plunge into his place setting which leaves a smashed plate and wine glass skewered into his face and hands. There's even a discreet but intense love scene between the two nominal heroes, Miss Clathorn (an appealing and lovely Tatyana Drubich) and Mr. Lombard (Aleksandr Kajdanovsky). What would Dame Agatha say? 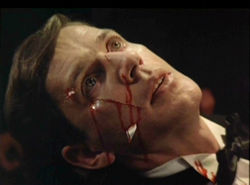 Previously known only to Russian-speaking audiences, this superior mystery has finally been given its due with an erratic but welcome English subtitled version on DVD. Contrary to the packaging which promises a 16:9 presentation, the transfer is actually full frame and taken from an obviously worn print. Apart from the obvious debris on the source material, video appearance is acceptable given the deliberately washed out colors. A gimmicky 5.1 track suffers from some distracting audio dropouts and awkward phasing between channels; the 2.0 stereo track is actually superior with a much smoother sound mix. Optional English or Russian subtitles are available; the subtitles convey the essence of the story but suffer from awkward misspellings and clumsy paraphrasing. The packaging and menus retain the politically incorrect British title of the novel (Ten Little Niggers), while retailers tend to stock the film as Ten Little Indians. (On the other hand, the subtitle translation refers to the ten title figures as "little Negro boys," which is hardly an improvement.) The menus can be accessed in either Russian or English, and the extras are limited to cast filmographies and a gallery of other titles available from the same DVD company.