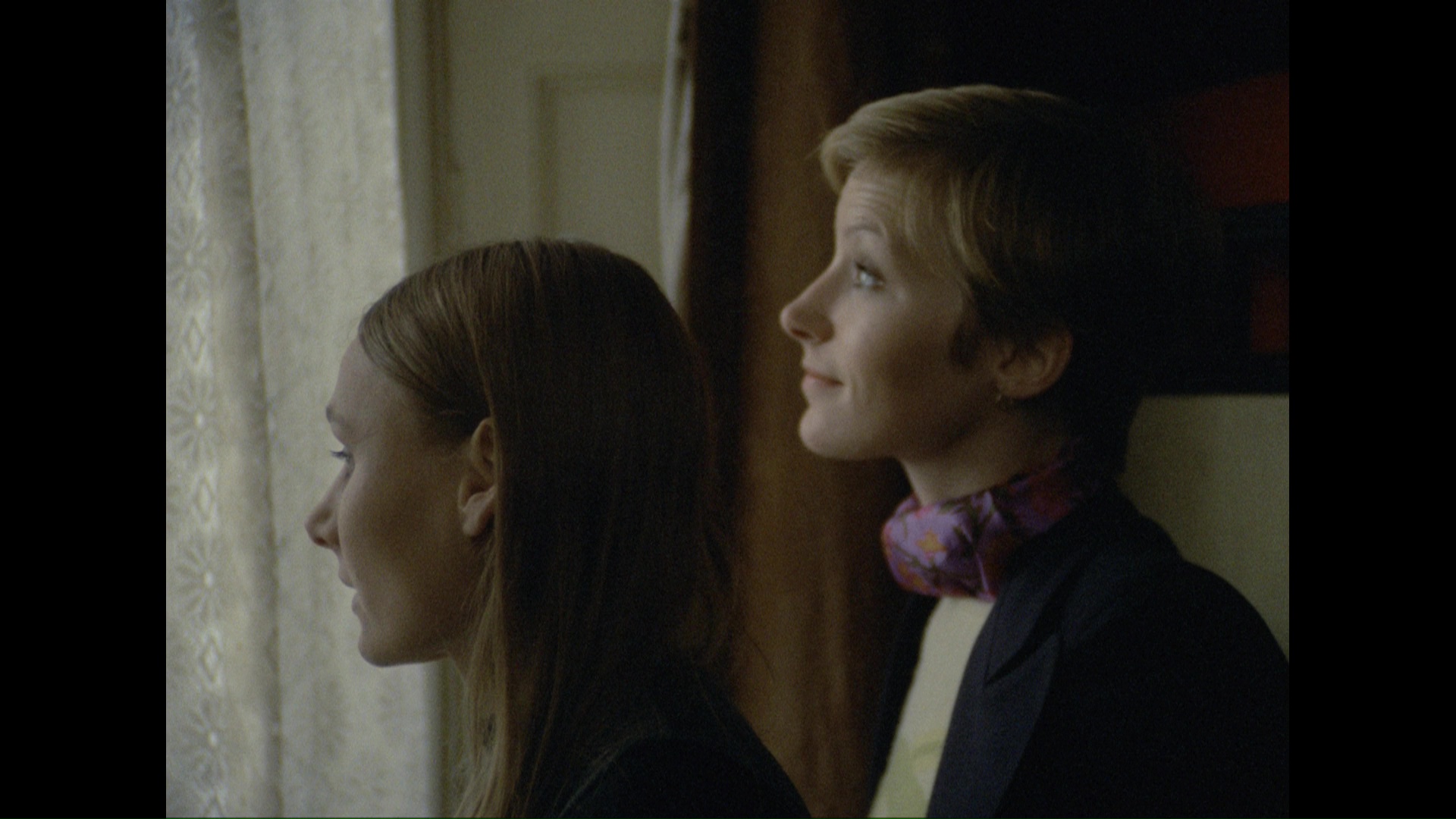 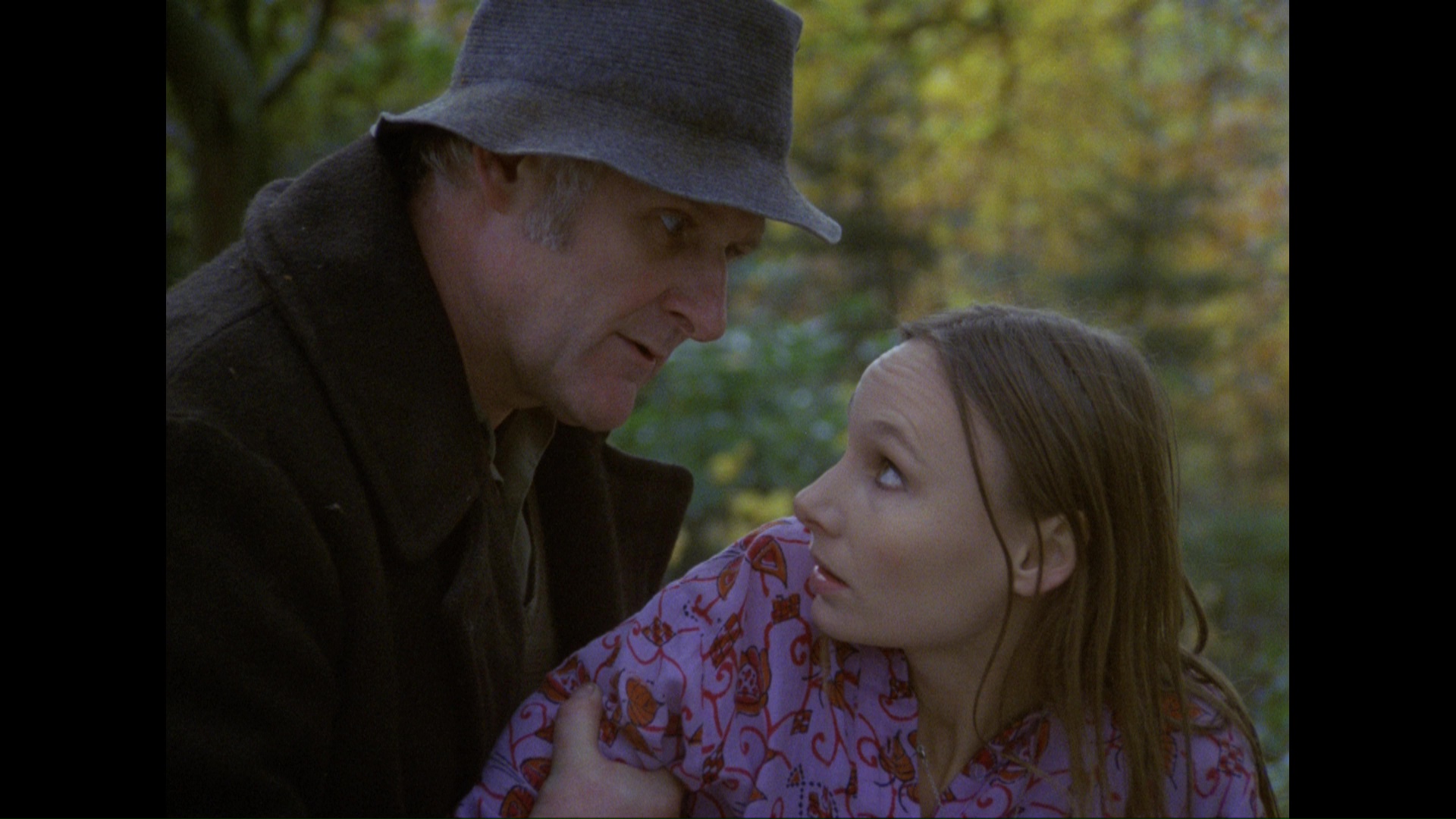 The same year as his now-classic sex and violence epic Vampyres, Spanish director José Ramón Larraz also helmed another beautiful, melancholy, and sometimes jolting horror film in England, albeit with a more respectable scenario. Saddled in some territories with the the more lurid title of The Blood Virgin, Symptoms is a rare starring role for Angela Pleasence, daughter of Donald, whose piercing eyes and uncanny presence can also be found in The Godsend and the Amicus anthology From Beyond the Grave.

Here Pleasence is cast as Helen, a quiet and buttoned-down type living in the countryside. She also spends time abroad and occasionally brings friends back to her remote house, and in this case the visitor is Anne (Heilbron), on whom Helen seems to have a sapphic crush. Anne's being pressured by her boyfriend to come back, but she decides to stick around and help Helen, who appears to be ailing. Complicating things is the seemingly menacing presence of handyman Brady (Vaughan), who warns that other women have come to visit before-- but weren't always seen leaving to go back home.

It wouldn't be fair to say much more, though anyone who's seen Roman Polanski's Repulsion 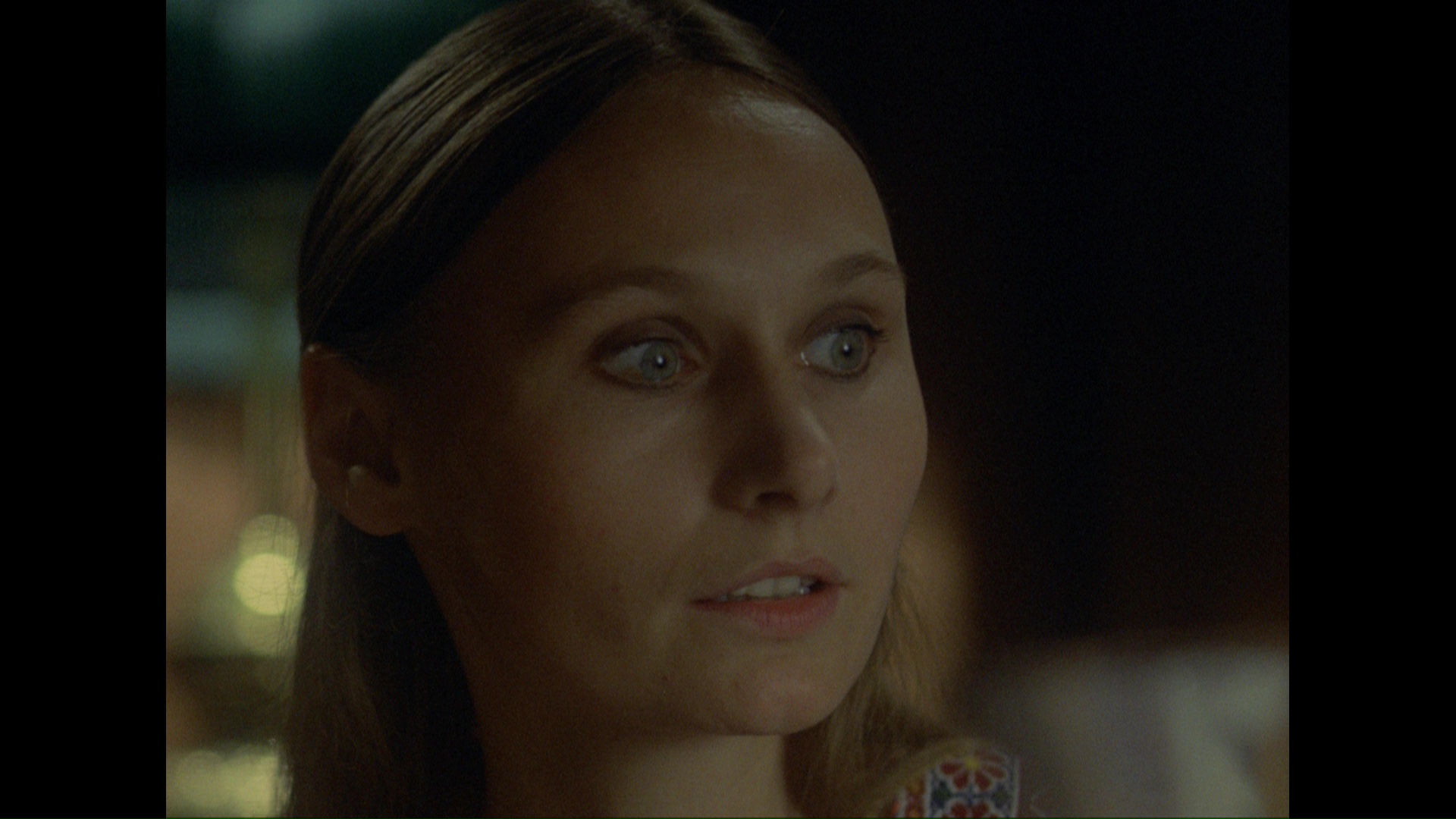 should have a fair idea of where this is heading by the halfway point. That said, Larraz manages to have some fun with the formula (which was over a decade old by this point) and even throws in a terrifically effective variation on Polanski's mirror jolt. The execution is a wholly unique affair, however, with the perpetually overcast and eerie setting creating an overwhelming atmosphere of sadness and mental instability. All of that explodes in the 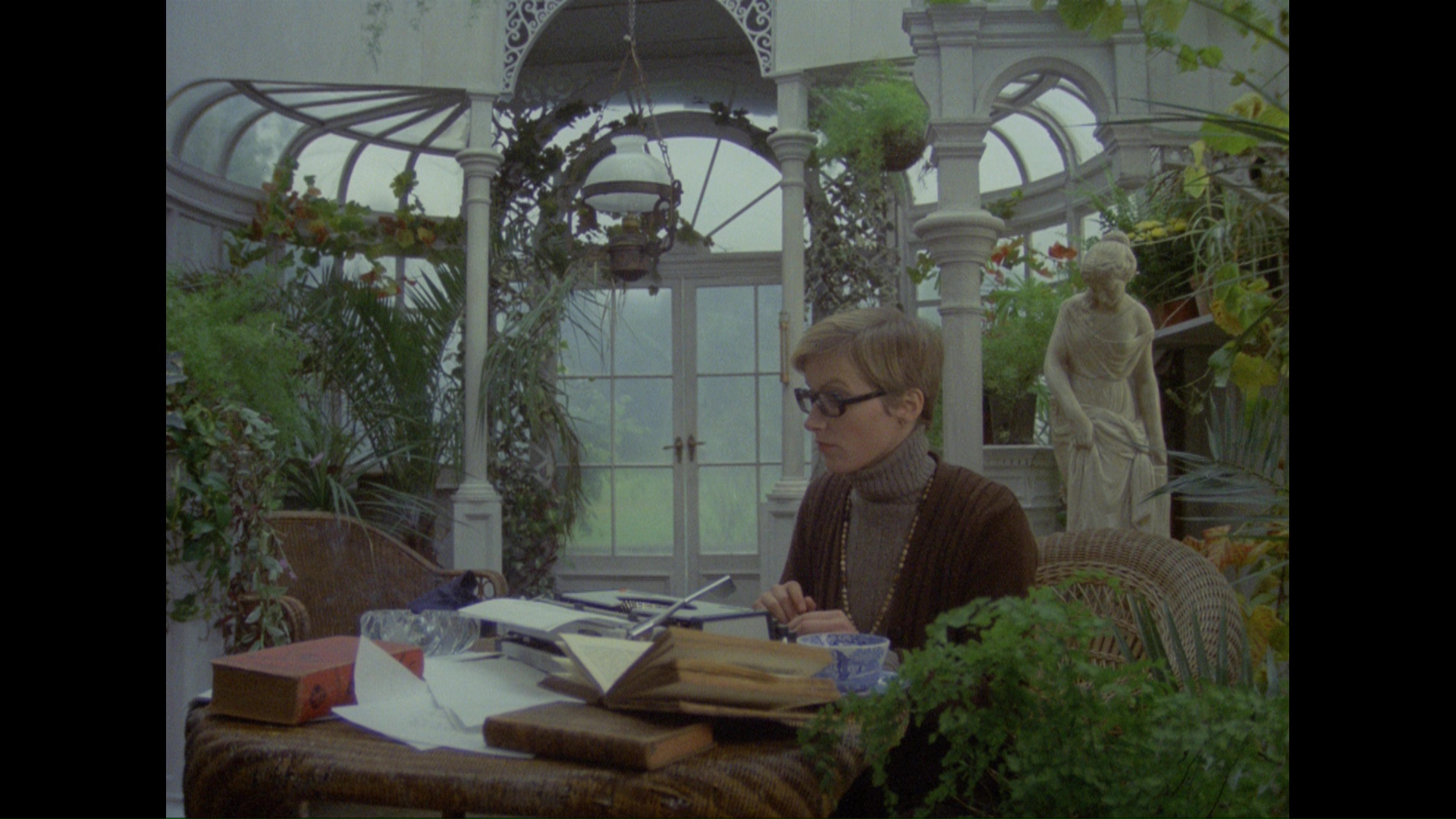 second half of the film, which delivers sparing but effective bursts of bloody violence and wraps things up with a quietly unsettling coda that manages to leave the viewer satisfied. What's interesting here is that we aren't entirely sure whether supernatural elements are also at play in the story; the glimpses of mystery woman Cora (Mailleux, Larraz's girlfriend at the time) are the creepy highlights of the film, and the last shot still leaves you wondering a bit about what it all really means. Interestingly, the film uses very little music (provided here by horror and library music favorite John Scott), instead favoring natural sound effects to draw attention to the oppressive house and its surroundings.

The mystique surrounding Symptoms has lingered for decades thanks to both the growing appreciation for Larraz's work (kickstarted primarily by Cathal Tohill and Pete Tombs' watershed book, Immoral Tales) and the film's bizarre release history. It was Britain's official submission to the Cannes Film Festival for 1974, which provoked ire from both UK and continental filmmakers, and it remained unreleased in its country of production for two years. Larraz's English-language career was damaged in the process, essentially sending him back to Spain after his unofficial trilogy of chilling British films (which also included The House that Vanished, aka Scream and Die). Poor Symptoms soon sank into oblivion with no official home video release, few reissues, 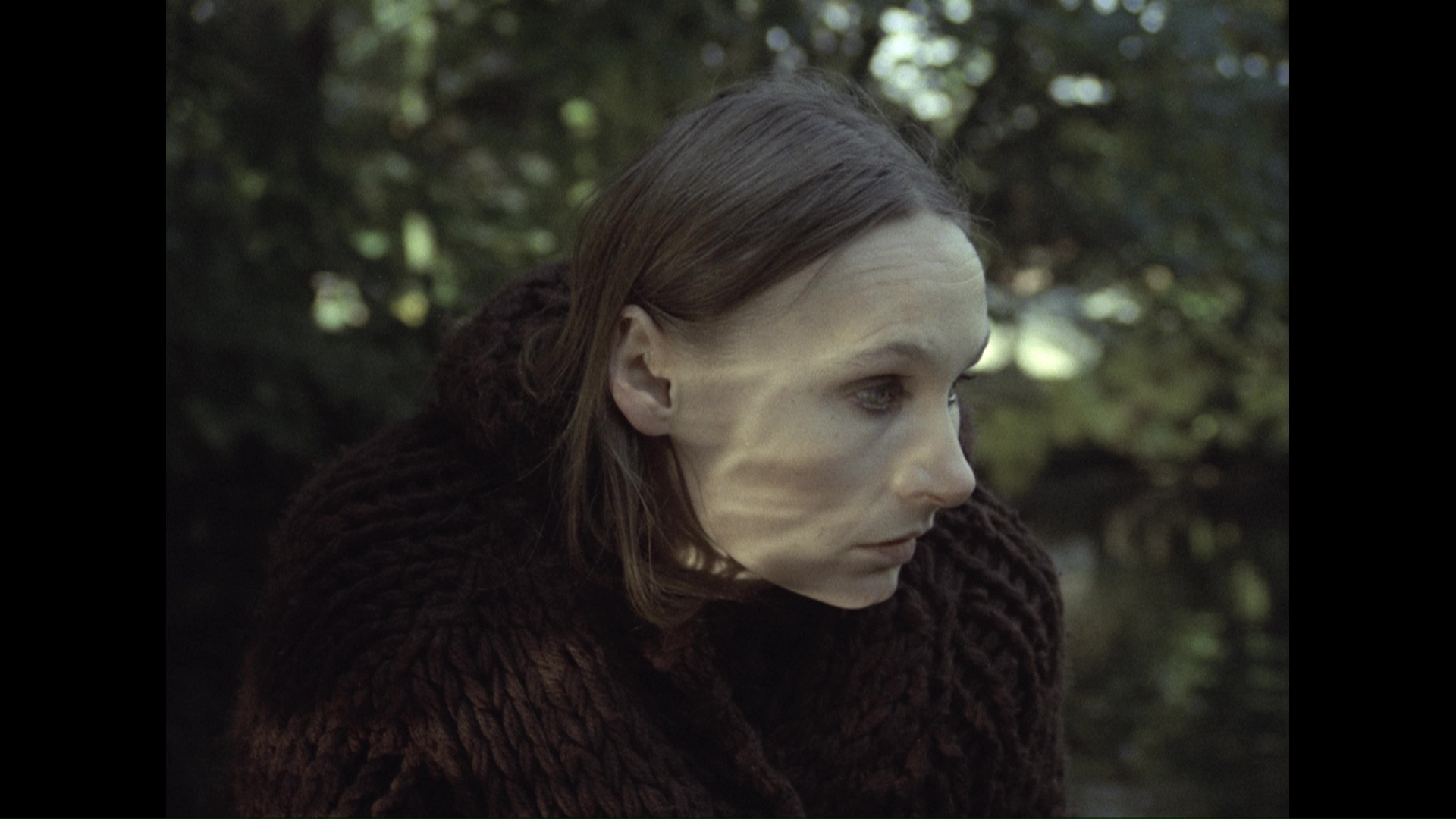 and only a couple of TV airings allowing anyone to see it before the BFI officially listed it as a lost film.

In 2014, the film's negative was finally discovered and transferred by the Belgian Cinematek, with new special features created for nearly simultaneous releases in the UK and the UK by the BFI and Pete Tombs, who now runs the great Mondo Macabro. The 2K-sourced transfer looks excellent and is presented in a 1.33:1 aspect ratio, which seems to be the most comfortable framing option. It may have been passable projected at 1.66:1 in theaters, but trying to zoom it to 1.78:1 on an HD monitor looks too cramped and often crops actors down to the eyebrows. The film itself has a very muted appearance with subdued colors, seeming to take place mostly at twilight, but this is presumably accurate to the original presentation.

The BFI release, part of a much-needed revival of its incredible Flipside line, is a dual-format release with a Blu-ray and DVD containing identical special features; in the United States, the Mondo Macabro release is Blu-ray only, with the exact same slate of extras and transfer of the film itself. Among the bonus material is the trailer (in a sparkling new HD transfer), "From Barcelona... to Tunrbidge Wells: The Films of José Larraz" (the great, now-familiar 24-minute episode of the essential 1999 Eurotika! UK series), and On Vampyres and Other Symptoms, a 73-minute Celia Novis feature about Larraz and two of his films 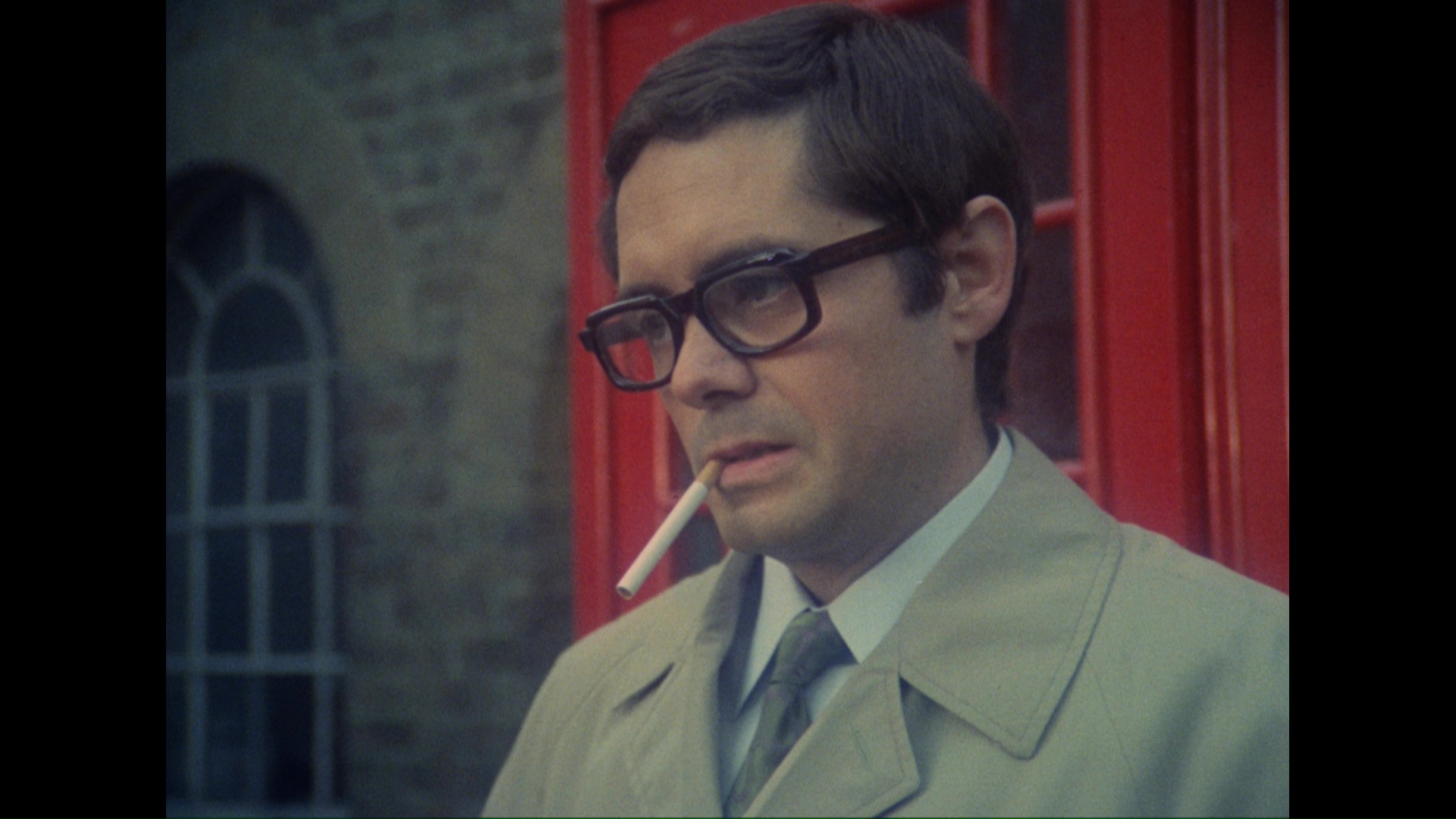 (guess which ones) containing extensive interview footage with the filmmaker and looks at his comic book work. It also concludes with a look at Larraz's special lifetime award at the Sitges Festival in 2011, and overall it offers an oddly beguiling, impressionistic look at the appeal of this unique auteur. Also included are three interview featurettes, all conducted by Tombs. A 9-minute interview with Pleasence is quite fascinating and illuminating, discussing the film's original casting choice for her role (Jean Seberg), 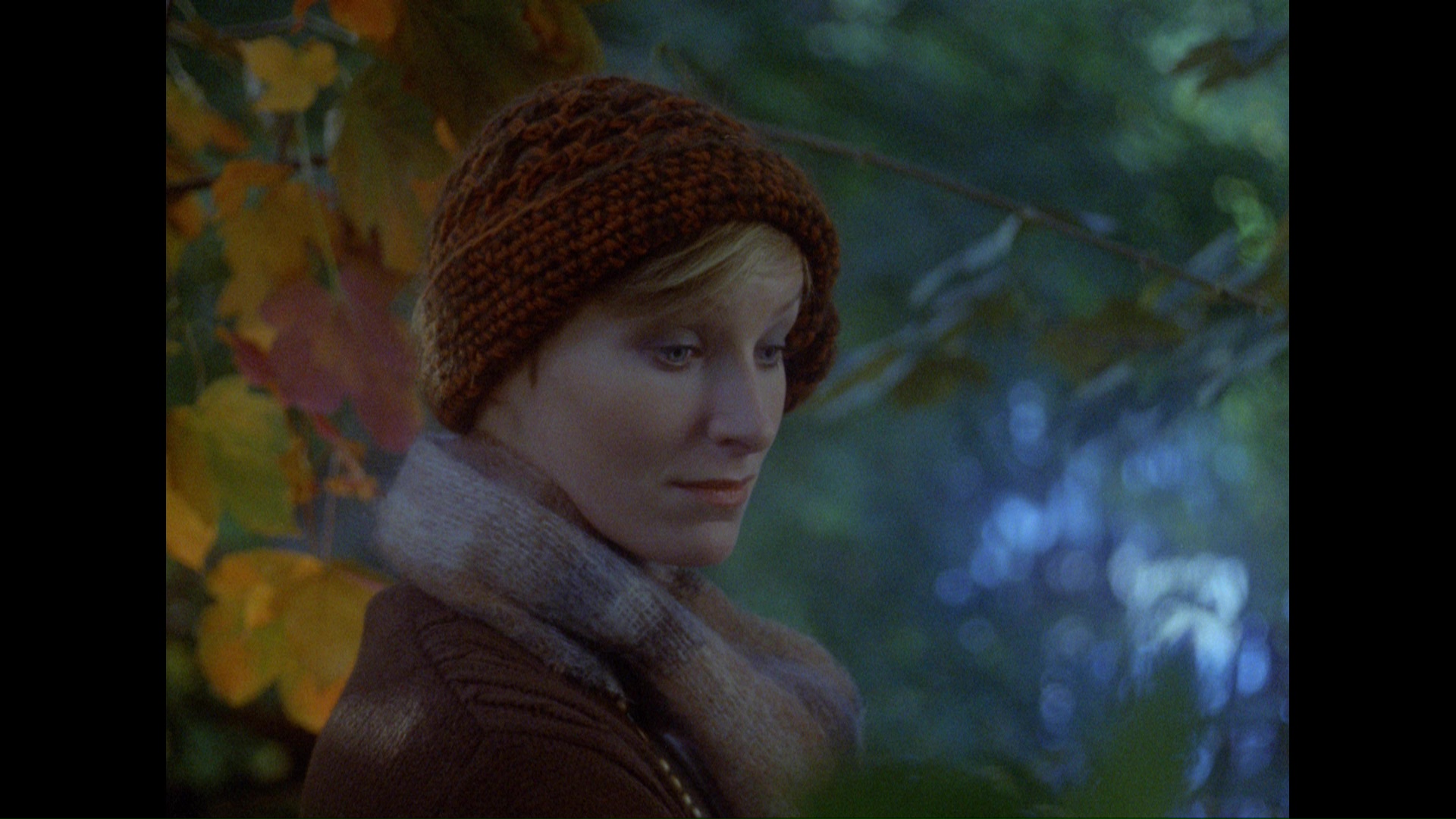 the controlling nature of Larraz on set, and her thoughts on her nude scene provided by a body double. Heilbron gets an 18-minute interview about the "extrovert" Larraz, her thoughts on English directors, and some of her other titles including The Creeping Flesh (which she loved), as well as her professional segue into psychotherapy. A 17-minute featurette with editor Brian Semdley-Aston starts with his early work like Performance and goes through his collaborations with Larraz, including this film which he didn't recall getting a general release at all. The BFI package comes with a liner notes booklet featuring a solid new essay by Vanity Celis, "Demons of the Mind: Contextualizing José Ramón Larraz's Symptoms," with a particular emphasis on his manipulation of its Polanski predecessor, as well as a vintage 1976 review from Monthly Film Bulletin and notes about the transfer and special features. The Mondo Macabro release can also be ordered as a 1,000-unit red case edition directly from the label's site, sporting a bonus DVD only in that first limited pressing contains "Larraz on Larraz," a two-hour interview with the director from which only a small portion was eventually seen in that Eurotika! episode, as well as exclusive liner notes by Samm Deighan.