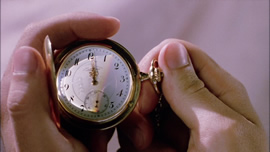 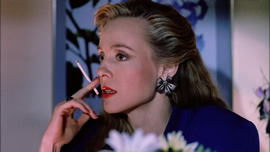 the reputed downfall of director Tobe Hooper. (Well, okay, maybe The Mangler, but that still seems to have more fans.) The director had recently come off of an absolutely berserk three-film tenure at Cannon Films (Lifeforce, Invaders from Mars, and The Texas Chainsaw Massacre 2) when the studio's downfall left him looking elsewhere for work. That opportunity came with this indie production, a pulpy thriller mainly designed as a rare starring showcase for the wonderfully eccentric Brad Dourif.

Here Dourif is cast as Sam, a man with a reasonably happy life and a nice girlfriend (Bain), but he's haunted by the horrible fate of his parents who spontaneously burst into flame just after he was born. Both were subjected to covert experiments in atomic radiation by the government back in the '50s, and that seems to have some bearing on his predicament now: he can control fire and electricity, but each time he uses his power, it deteriorates him physically. On top of that someone's running around killing people with a poison-filled syringe straight out of Re-Animator, and the local nuclear power plant (which apparently accounts for most of the incoming cash for the town in which this is set) seems to have a sinister agenda involving our hapless protagonist and his literally fiery rage issues.

It's easy to see 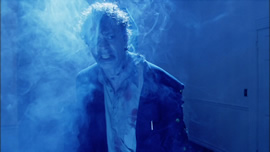 how this film rubbed people the wrong way when it came out, particularly since it's oddly structured (Dourif's character doesn't even show up until the 22-minute mark) and features a number of characters and tangents that don't always coalesce into a satisfying whole. That said, time has been surprisingly kind to the film thanks to its surprising visual flair (especially in the second half) and Dourif's excellent performance, which kicks off with him 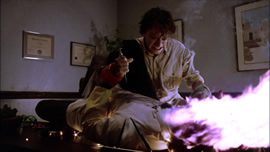 speckled with glitter running lines for a production of King Lear and eventually running through every emotion in the book by the time it reaches the big fiery climax. On top of that you get a surprising array of supporting characters including a fun femme fatale turn by Rock 'n' Roll High School's Dey Young (with some cool blonde streaks) and solid roles for old pros like Melinda Dillon and TV vet Jon Cypher, not to mention a small bit for none other than Dick Butkus and cameos from two horror directors, John Landis and House of Wax's André De Toth. Also noteworthy is the rich, effective music score, an early effort for composer Graeme Revell who had just come off of Dead Calm and would go on to do Pitch Black, The Crow, Bride of Chucky, and Freddy vs. Jason among many others. All in all, it's no classic by any means but the fun, scenery-chewing performances and often wild practical visual effects make it an enjoyable ride for '90s horror fans.

Anchor Bay released this film on DVD in 2003 (following a theatrical release in '90 from Taurus and a VHS from Media) with a decent anamorphic transfer, a Dolby Digital 2.0 stereo track, and the trailer as the sole extra. The 2015 limited edition (3,000 units) 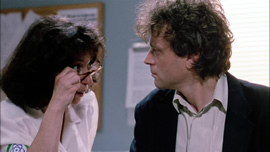 Blu-ray from Code Red sold exclusively via Screen Archives marks a welcome HD upgrade for the title, which was shot with a very dark, heavy, noir-inspired appearance with a loud color scheme heavily reliant on primary colors. Grain looks finely textured but natural, while detail levels are adequate if unspectacular considering the way this was shot. The DTS-HD stereo track sounds robust with some nice support for the Revell score as well. 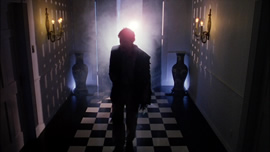 The feature can also be played in Katarina's Bucket List Theater mode with hostess Katarina Leigh Waters zipping off fire puns and shooting flames out of her hands while filling you in on the backgrounds of the actors and crew.