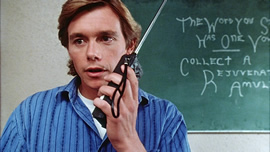 Had it been released a couple of years earlier, Shakma would probably be a popular 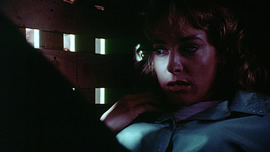 horror cult film by now. Most obviously, it features one of the most intense, terrifying, indescribable performances ever given by an animal in front of a camera. On top of that you get a crazy cast seemingly assembled by throwing darts at a SAG membership list, a loopy spin on Dungeons and Dragons mania that was already fading from public consciousness, and a bizarre animal amuck twist on the plot from Die Hard. What's not to love? Unfortunately it came out in 1990 just as the market for theatrical horror films had collapsed, with even the most enjoyable popcorn monster movies consigned directly to video store shelves. Shakma did receive a tiny handful of big screen showings scattered around America, but for the most part it was only encountered by a lucky few willing to take a chance on a title that had seemingly fallen through the cracks.

At an anonymous college campus, the med students are distracted from their surgical training by a little thing called "the Game," which is overseen by Dr. Sorenson (Roddy McDowall, of course) and his pet favorite student, Sam (Christopher Atkins, the Blue Lagoon star hot off his roles in Beaks: The Movie and Mortuary Academy). Everyone wants in on the Game, even the most obnoxious jocks, and the fun's scheduled to start at night right after a traumatic afternoon in which Sam's favorite test animal, the baboon Shakma, has been ordered to be euthanized after an experiment in 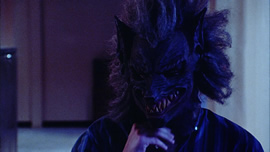 drugged, surgically-enhanced aggression control goes wrong. Sam ignores those orders of course (otherwise we wouldn't have a movie), decided to heavily sedate the animal instead and figure out a solution later. Anyway, that night the entire cast gets locked up inside their building to play the Game, which is all arranged via walkie talkies and computer (complete with glorious cutting-edge animation), including Sam's girlfriend and 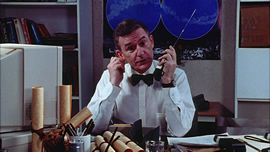 colleague Tracy (A Nightmare on Elm Street's Amanda Wyss) and sweet young innocent Kim (Kate and Allie's Ari Meyers). Of course, it's just a matter of time before Shakma's on the loose and ripping the players to gory shreds with the survivors frantically running for lives.

This movie is just amazing. No one seems to be acting in the same film, which somehow just adds to the fun as the entire Florida-shot production is easily stolen by Typhoon, the baboon actor whose frenzied rages have to be seen to be believed. We've had some scary packs of simians in adventure films like Sands of the Kalahari and the mostly forgotten 1986 horror film In the Shadow of Kilimanjaro, but this one takes an entirely different approach by letting one, very intense baboon take center stage for the entire running time. There's quite a bit of bloodshed for gore fans, too, and the story goes in some shockingly dark directions that few will be able to anticipate. The film was initially started with comedy director Hugh Parks, who called in a co-director in the form of Tom Logan, who worked on the slasher movie The Night Brings Charlie the same year for this film's production company, Quest Entertainment (who released both titles under their short-lived VHS arm). (Speaking of which, a Blu-ray of Charlie would be really welcome one of these days.) Unfortunately the lack of major studio backing meant it had to be hunted down by devoted horror fans, who were often lured in by the spectacular video trailer ("Shakmaaaaaa!"). 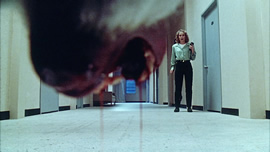 The legend of Shakma had to spread mainly by word of mouth and gray market swapping for many years since the film bypassed the mainstream DVD era entirely. A very nice 35mm print has popped up for after hours screenings on occasion, which just made its absence on video even more pronounced. Fortunately in 2015 that was rectified with a limited 3,000-unit edition from 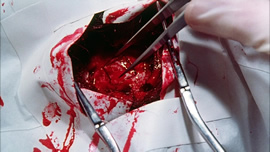 Code Red, sold directly through Screen Archives, that looks essentially identical to that aforementioned print and was probably taken straight from it. There hasn't really been any fancy clean up here, but it looks far, far, far better than the old tape with nice, robust colors and much better detail, not to mention more satisfying 1.78:1 framing compared to the awkward open matte compositions we've known in the past. The texture is definitely on the dark and gritty side as you'd expect and nothing like a sleek new digital production, but it's a massive upgrade across the board compared to what we've had. The DTS-HD MA stereo audio also does full justice to that aggressive synth score, not to mention the frequent screaming of the cast. The film can also be played in Katarina's Bucket Theater List mode, with hostess Katarina Leigh Waters vamping it up as her scheming sister Antoinette in circus ringleader mode and offering lots of tidbits about the cast and crew. Logan also appears for both an on-camera interview and an audio commentary with moderator David DeCoteau (and occasional chime-ins from label head Bill Olsen), both of which cover the major actors (including an unnamed one who kept flubbing his lines with McDowall) and spend quite a bit of time understandably focusing on how they achieved that incredible footage of Typhoon going ballistic. Helpful tidbit: even if it's a professional actor, never look a baboon in the eye. Ever.