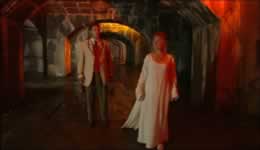 In the German town of Heidelberg during the 19th Century, young doctor-in-training Stefan Christoph (Holland) arrives to encounter an eccentric collection of inhabitants who all seem to be guarding a dark secret. When a beautiful young woman he encounters in the woods suddenly turns on him with a knife, Stefan discovers that the area is being held under the sway of Prester John (FX legend and Machete star Savini), an immortal mythical king who, according to Christian lore, ruled from a mysterious land across a sea of dust and spread the word of faith across the Far East. As it turns out, he also isn't opposed to using torture, possession, and murder to maintain control, and soon Stefan is pulled directly into the supernatural lord's domain where the laws of reality become bent beyond recognition. 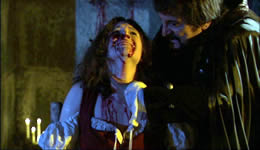 A very different sort of low-budget horror film in today's climate of cut-rate torture yarns, Sea of Dust ambitiously sets its sights on a complex, mindbendng story about the extremities of moral conviction framed like a nasty fairy tale. Director Scott Bunt openly acknowledges his debt to Hammer classics, including the casting of The Vampire Lovers' Ingrid Pitt in a key role and an opening act that features some obvious stylisic nods to Kiss of the Vampire and especially The Gorgon. However, the free-associative narrative that becomes stranger and stranger by the minute feels a whole lot closer to '60s Continental Europe, sort of a clash between The Saragossa Manuscript and Kill, Baby, Kill with a hefty dose of gore. Yes, you get plenty of metaphysical meat to chew on here, but the film also delivers the red stuff with a variety of savage whippings and plenty of cranial invasion via a pitchfork and a cross. 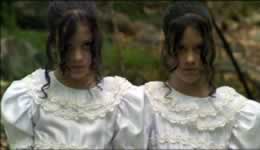 Gore pioneer Savini (wearing black contacts straight out of TV's Supernatural) really hams it up in his black-caped villainous role and even gets a crucifixion scene worthy of Ken Russell, but that's just the shot in the arm the proceedings need given Holland's committed, tortured contrast as the put-upon hero. The film isn't perfect by any means; the sound recording and mixing feels too flat at times, the first act relies a bit too heavily on protracted conversations for comfort, and some of the blood is a little too brightly lit and looks more like watery jam, but the ambitions and ultimate payoff easily make it worth a look. Extra kudos for the atmospheric, inventive music score by Jasper Drew and some unexpected comedic touches including inspired performances by artist Edward X. Young and voiceover staple Bill Timoney as agents of rationality in this ongoing war of philosophies.

Cinema Epoch's DVD of Sea of Dust features a very respectable anamorphic transfer that captures the delicate visual textures of the film, which does its best to mimic the look of color-saturated '60s European filmmaking with today's HD methods and comes admirably close on several occasions. The 5.1 audio track handles the score nicely despite the aforementioned recording shortcomings, while a second audio track features a commentary with director Bunt and producer Pauline Bunt in which they talk about the casting process, the elaborate production design on a minimal budget, the significant symbolic purpose of the color red, and the mythical and cinematic influences on the film including the many Hammer references. Other extras reinforce the tongue-in-cheek aspects of the production including a behind the scenes featurette, three deleted scenes (which contain some exposition that should have been left in the main feature), a teaser, and three theatrical trailers including a funny grindhouse variant complete with scratches, dirt, and plenty of hype, not to mention a well-placed Wilhelm Scream. The disc is almost worth buying for the main trailer, which is the only time you'll hear a film pitched as "featuring America's sweeheart, Stuart 'Multiple Miggs' Rudin."