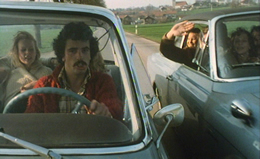 Five years after it made a splash in Germany and then around the world with its first film, the sexy Schoolgirl Report series from Germany was still going strong and far, far from over when this ninth installment was unleashed. While the previous eighth film revolved around a sexy school bus trip out to the countryside, this one starts off with far

more of a vehicular bang as two carloads of joyriding teens are racing each other down a street on the outskirts of town. Faster than you can say Carnival of Souls, one of the cars smacks headfirst into a tree while the other takes a dive into a gravel pit. Though no one is killed, two kids are injured, leading the cops to pore over the stories of how each teen became involved in the incident. Of course, it all boils down to the fact that they were all involved in a wild party complete with stripping ("An outrageous orgy!" according to the cops), but each one's path there is a little different.

For example, there's perky blonde Petra (Janssen), who announces in social studies class that she's just turned 18 and plans to marry her mechanic boyfriend (Walter) that same day. More of a defiant dare than an actual plan, her marriage turns out to be complicated by her distressed parents and an awkward wedding night at a bed and breakfast complete with an elderly, widowed hostess who just wants to steal a peek at the naked groom. Of course it all winds up going straight to divorce, and the couple decides to make the pivotal party their farewell shindig.

Thrown by the sluttiest girl in class, Lilo (Armbruster), the bash also turns out to be a big deal for Tessy, a frizzy-haired virgin whose protective friend does something drastic to the party punch to ensure her chastity after everyone strips and goes skinnydipping in the house pool. Then there's Uschi (Karnat), who dabbles in lesbianism with a classmate, Susie (Atia), after sharing an erotic story. This doesn't sit well with Susie's domineering, pompadoured stepfather, who gets her pregnant after molesting her under her mom's nose. In the silliest story, Katja (Szenetra) brings her boyfriend home to visit her prim parents, who feel they're out of touch and decide to get with the times -- by reading a teen encyclopedia and putting on hippie clothes and mop top wigs, much to their daughter's horror. ("You're one beer short 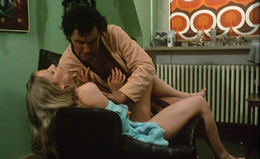 of a six pack!") Then there's poor Claudia (Dupont), whose boyfriend is in a coma after the accident. Turns out he 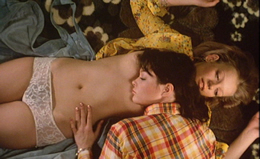 By now most people probably have a pretty good idea of what to expect here, namely lots of T&A, silliness, and hand-wringing adults who don't want to confront their own responsibility to their kids living in different times. Director Walter Boos (who made his series debut with the third film) keeps things percolating nicely throughout and never lets the stories wear out their welcome, even when it edges dangerously close to sitcom territory. (That one with the "modern" parents could almost be a Three's Company episode.) As usual, a shortened version with an English dub was created for the international market under the name Sophomore Sensations, while the UK saw it a few years later as When Girls Make Love. A German DVD (released uncut by itself and then abbreviated as part of a series boxed set) has been floating around for a few years, but the 2012 Impulse release marks its first English-subtitled legit appearance on home video. At first glance the transfer looks similar to prior entries, namely with pretty decent but somewhat pallid colors and a little damage here and there, but overall quite watchable and definitely better than the cruddy VHS copies from decades ago. However, it's also wildly inconsistent at times; for much of the running time it looks okay, but sometimes bright white areas tend to flare a bit with what looks like some spiky video noise. (Click here for an example.) It's not a deal breaker by any means and only pops up from time to time, but it's definitely odd. As with some earlier releases, the opening credits are slightly overmatted to 1.78:1 and look pretty iffy while the feature itself is correctly framed at 1.66:1 and in better condition. The mono German audio sounds fine with that catchy theme song blasting out at the beginning, and the English subtitles are, as usual, utterly hilarious and often wildly quotable.