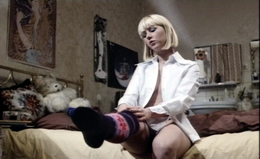 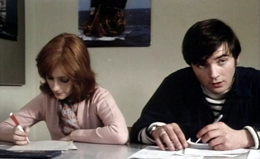 schoolgirls yet? Not in this eleventh installment in the Schoolgirl Report saga has anything to say about it. While the tenth film hit perhaps the high water mark for sheer insanity in the series, this one settles back into the usual goofball softcore shenanigans with yet another new framing device: a frank and modern radio talk show, featuring such panelists as "Mrs. Thea Bertold, a homemaker," and "Principal Dr. Wolters," who leads a "humanistic high school." Also on hand is a police inspector to lead the discussion of how society's laws either protect or harm the kids of today, which means we get plenty of barely related examples involving teenagers getting into sexy trouble.

For example, we have an 11th grader named Martina whose catastrophic math grades have her seeking help from Rolf, the cad who sits next to her and retorts with comments like "Where does it itch, honey?" and sticks his hands down her underwear in class. A cheating accusation has her branded as a "hopeless case," but things get worse when she decides to let Rolf be her first time -- leading to heavy tutor sessions and an increasingly tragic turn of events. Next up we examine the "cruel stress" of abusive child labor laws that inflict a hardship on kids in school, as represented with 18-year-old blonde vixen Regine, who claims that her own school tutor, Werner, was recommended by 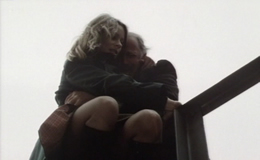 her father only to turn around and sexually assault her (in front of a Great Dane, no less). Funky music, fluffy rugs, and rampant nudity ensue, but when Werner is called in by the cops, he has a different take on the events. This one's a rerun of a scenario already done to death in prior installments, but the amusing execution makes it worth seeing all the same.

Our third story comes from one of the sound board operators, Gila, who spills her own sordid secret while 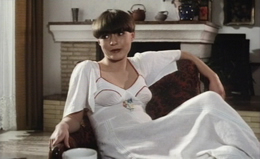 everyone's taking a smoke break. At the age of sixteen, she started exploring her body in front of the mirror and turned into a sex machine, bringing along her best friend Gabi to a foursome in a barn with a couple of male friends. Unfortunately the combination of weak rafters and a ton of paint buckets conspire to turn their escapade into a disaster. Back on the air, the debate over the importance of virginity versus the price of sexual repression is dramatized in the tale of Michaela Rautenberg, a good but lonely student living alone with her ailing mom. She decides to hurl herself off a bridge (wearing groovy go go boots) and leaves behind a suicide note, which her teacher finds just in time to stop her. She shares the shameful secret that drove her to such a desperate act, involving sexual slavery and a bunch of hairy motorcycle thugs in black leather. But doesn't it always? Finally a young virgin named Heidi is accused by her friends of playing "the iron maiden" while they look at erotic ancient art in their textbooks. The girls all swap stories about how they lost it, including another barn incident and a run in with a cousin 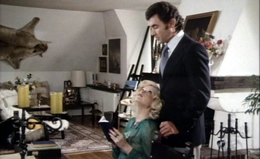 (leading to the immortal line, "Do you know his noodle?"), before Heidi finally gets her shot at happiness herself. Finally we learn the moral of this whole enterprise: "Young people have a right to love, and our schoolgirls, about whom exaggerated rumors are far too often spread, will certainly become loving wives and good mothers." Take notes, everyone!

Exactly why the German title of this film is Trying Beats Studying is anyone's guess, but this film was shown in cut form in America as Naughty Freshmen and also turned up on VHS as Blue Dreams. It's not the most explicit film in the series by a long shot, but there's still an avalanche of female exposure here and enough genial goofiness to make it a solid entry. As usual, the 1.66:1 anamorphic DVD from Impulse is on the desaturated side but looks fine for the most part, once you get past the typically rough opening credits probably spliced in from a random release print. The optional English subtitles for the original German audio (the sole option) are, as usual, highly quotable.