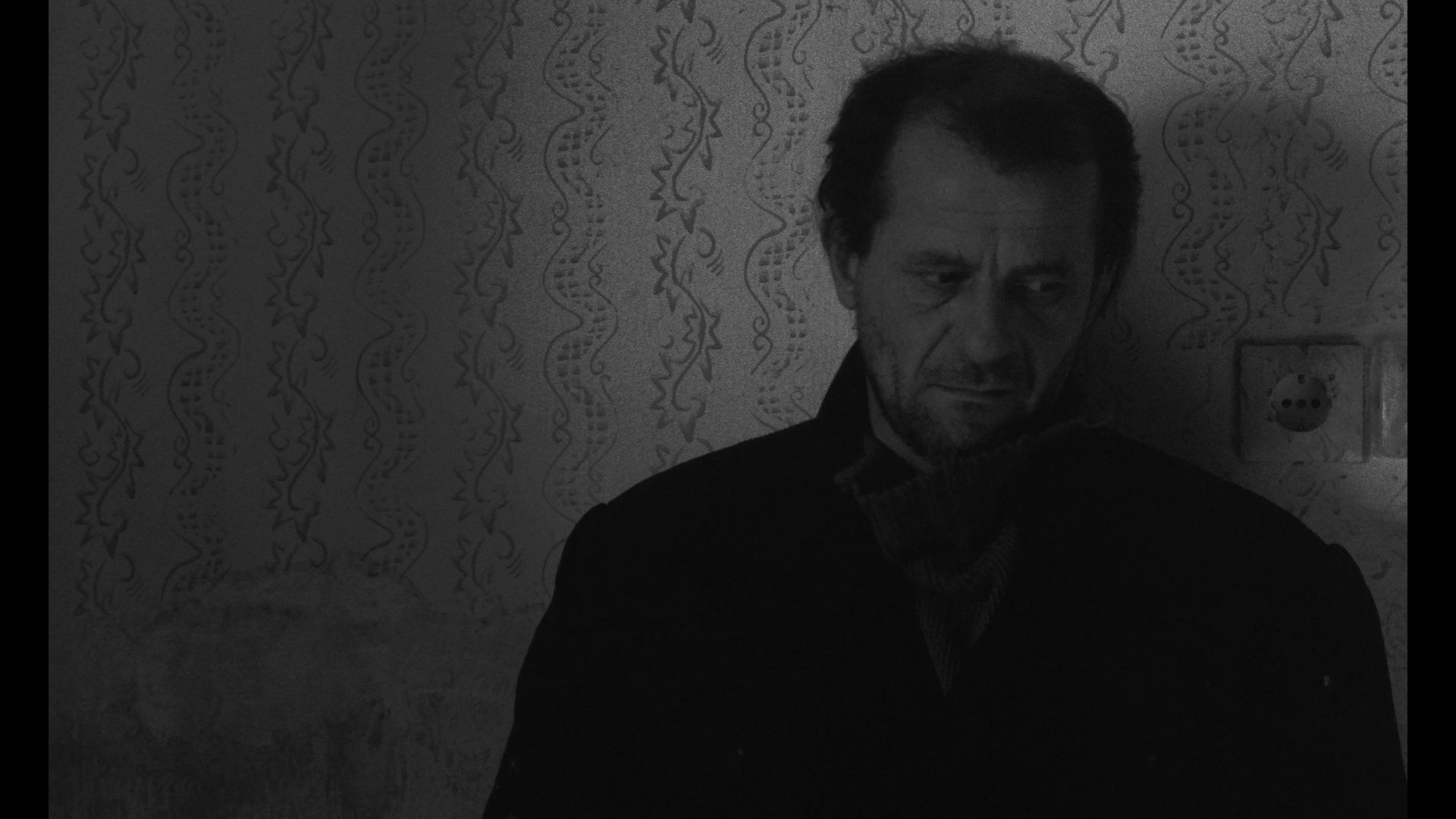 major name in world cinema but 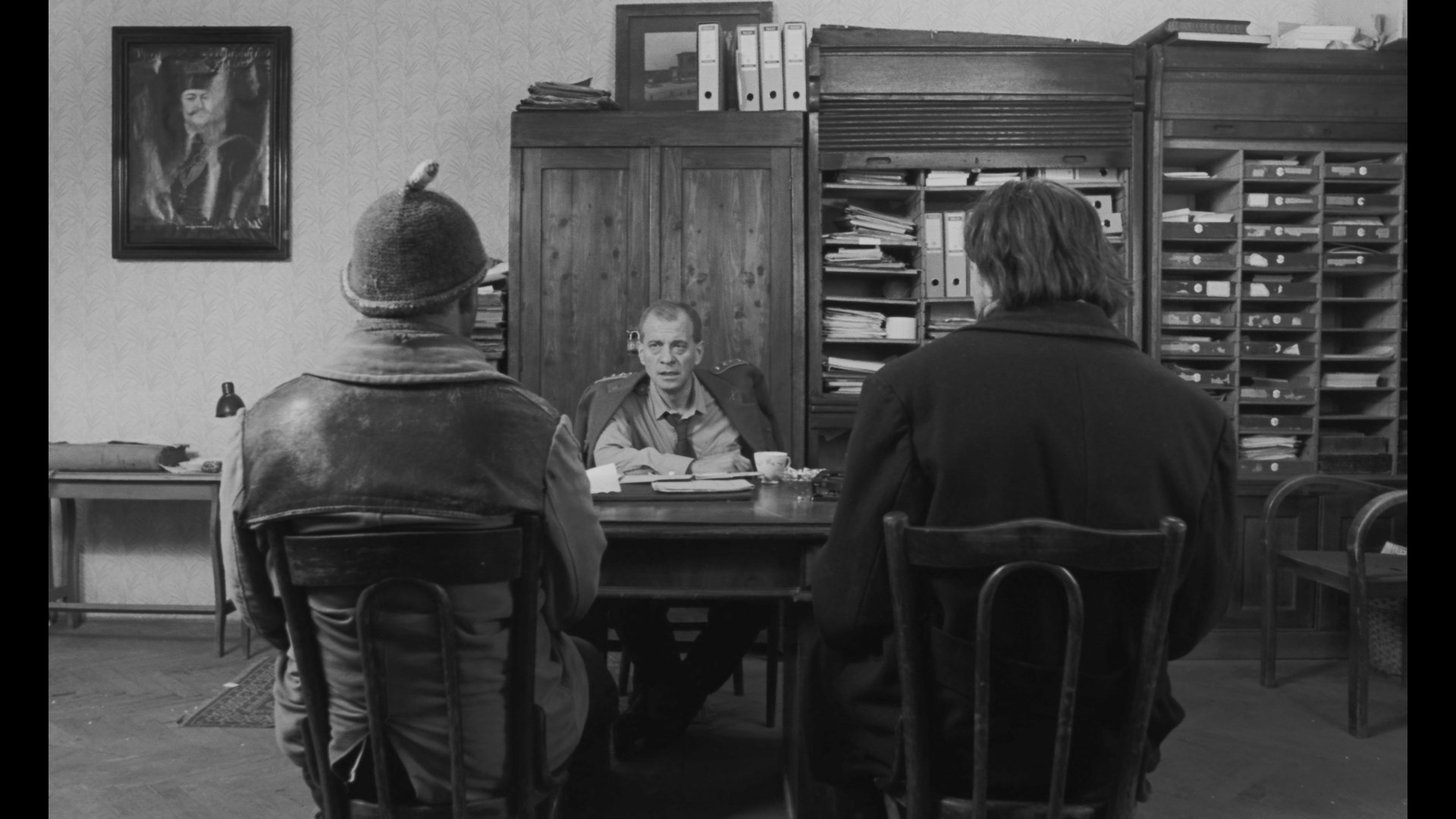 definitely not for everyone, Hungarian filmmaker Béla Tarr built a challenging and fascinating body of work over the course of nine films from his debut in 1977 through his avowed retirement feature, 2011's The Turin Horse. Taking a grim view of humanity, he found acclaim with many films including Wreckmaster Harmonies and Almanac of Fall; however, the general consensus is that his magnum opus is the epic-length Sátántangó, a meditative, sprawling, seven-plus hours improvised adaptation of a 1985 novel by László Krasznahorkai.

In a remote village bereft by the loss of its communal farm, the residents have become consumed by infidelity, thoughts of escape, and attempts to control their lives in sometimes drastic measures. Among them are Mr. Schmidt (Lugossy), who's conspiring to abscond with the funds gathered to build a new farm, and his wife (Albert) who's having an affair with another villager, Futaki (Székely). Over the course of twelve chapters (echoing the tango structure of the title), various characters move in and out of the narrative including a pair of very dysfunctional siblings and a local doctor (Berling) whose errand run turns into an unexpectedly turbulent and lengthy journey. Meanwhile other forces are swirling to spy on the village, complicated further by the arrival of one resident believed to be dead.

Composed of famously long and beautifully orchestrated shots that make Tarkovsky look hyperactive by comparison, Tarr's film is a truly singular and hypnotic experience that becomes surprisingly intense and moving 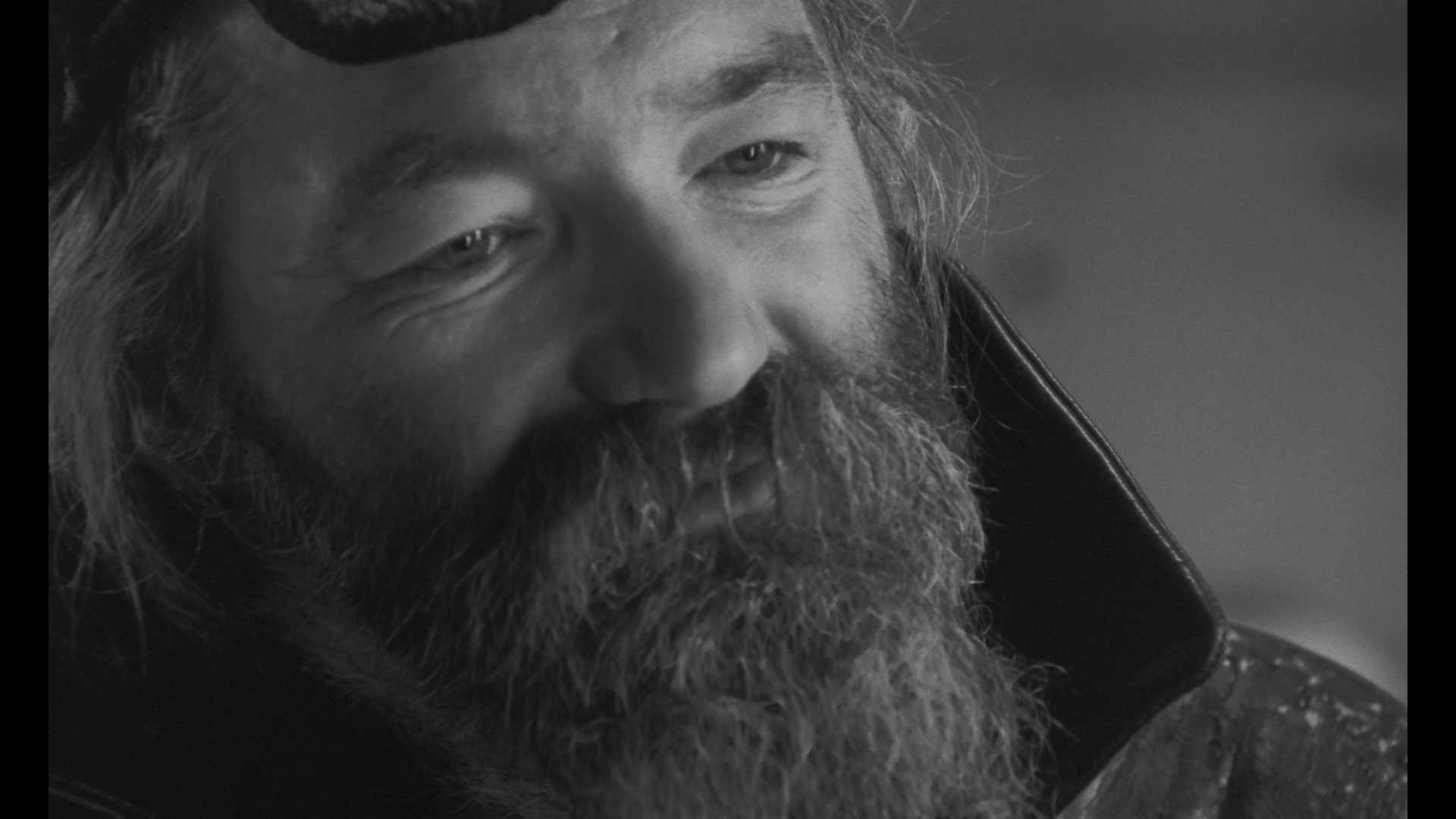 once you get acclimated to its rhythms. (The opening lengthy shot of cows moving through the landscape will be a good test to see if you're in the right frame of mind.) The exquisite black and white cinematography by regular collaborator Gábor Medvigy is never less than stunning even when the film gets almost unbearably dark, 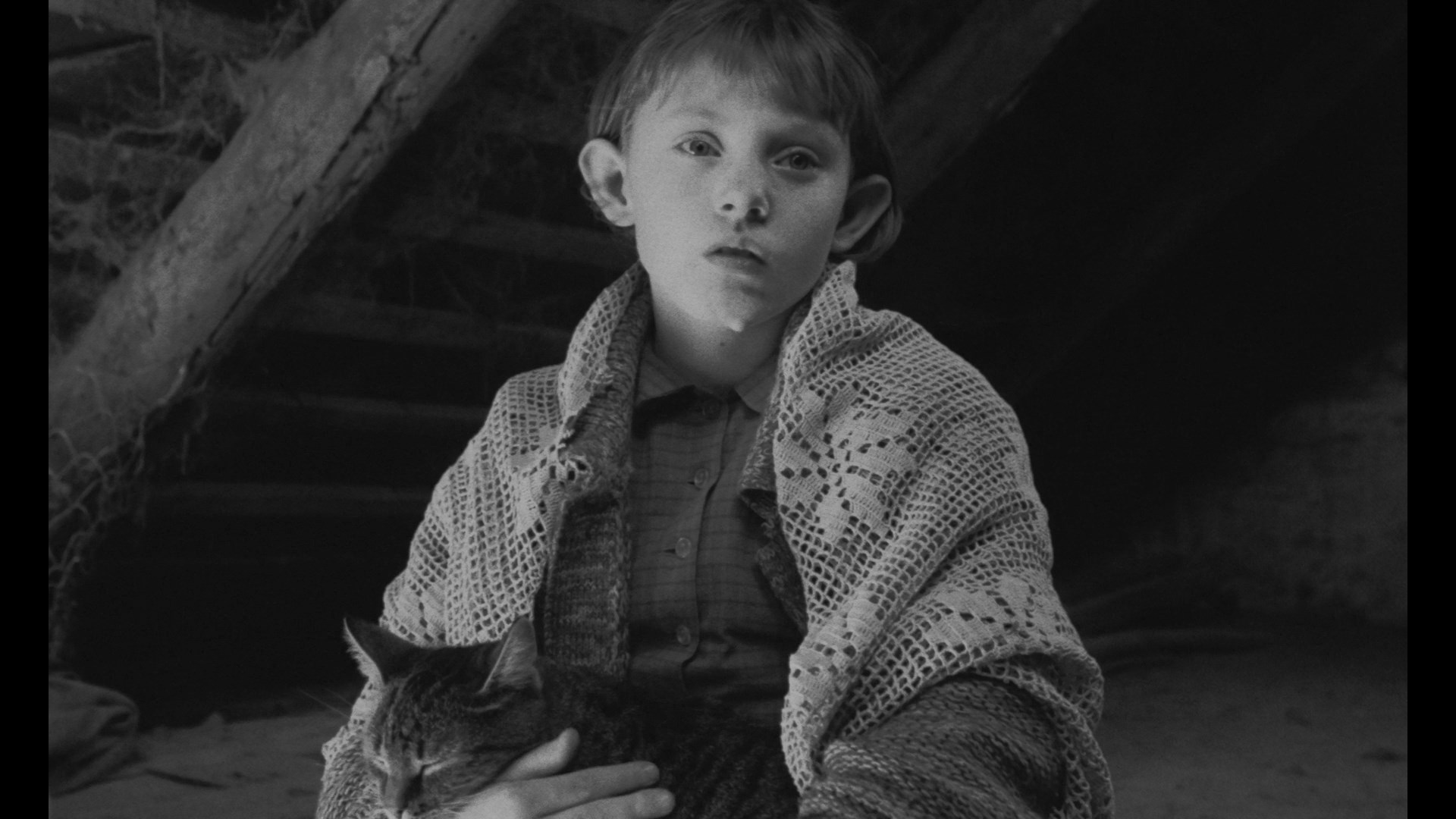 including a simulated sequence involving a cat (reportedly supervised by a vet) that will nevertheless have pet owners squirming with discomfort.

Famously difficult to program theatrically due to its length, Sátántangó was also rather elusive on home video in most territories for years apart from the occasional anomaly like UK DVD from Artificial Eye in 2006. A full-scale 4K restoration was finally undertaken from the camera negative, resulting in a Blu-ray release in the UK in the Spring of 2020 that spread the film over two discs. In early 2021, Arbelos brought the film to U.S. Blu-ray, also allocating the film to two discs with the film split into three sections (two on disc one, the remainder on disc two). The image quality here is immaculate with the restoration really shining here with razor-sharp detail and a beautifully deep, rich grayscale throughout. The DTS-HD MA 1.0 mono Hungarian track (with optional English subtitles) has less heavy lifting to do but also sounds excellent. In the new video interview "A Sense of Rhythm" (41m17s), composer Mihály Víg (who also has one of the most significant acting roles in the film as Irimiás) chats about his thwarted attempts at music school, his discovery of rock music, and his first encounter with Tarr that led to a long string of films together with various recording and financing challenges along the way with many artistic collaborators involved. He also 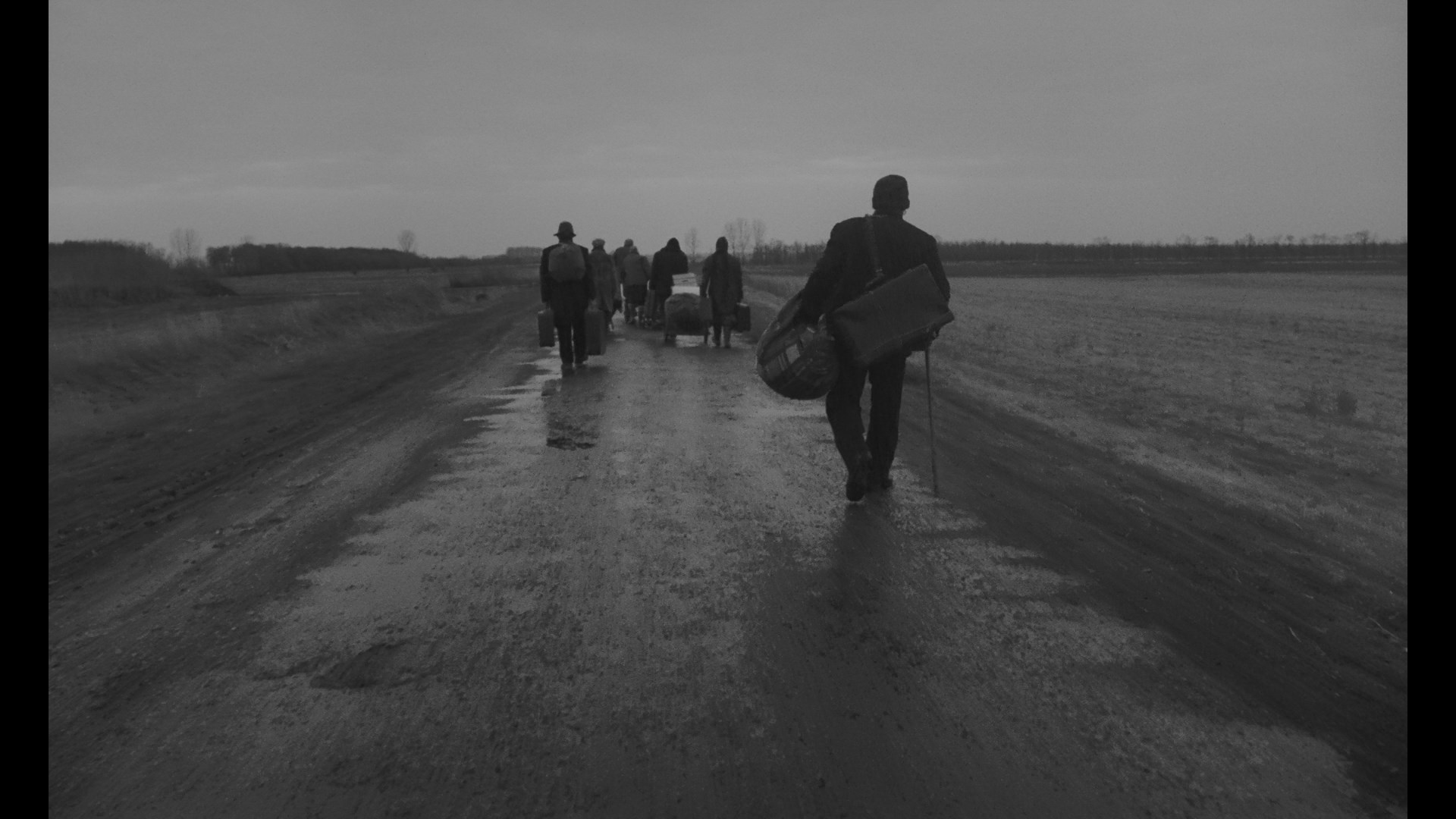 chats about his reaction to the novel (including his very different expectations about his character) and his preparation process for his big monologue scene. The new video essay 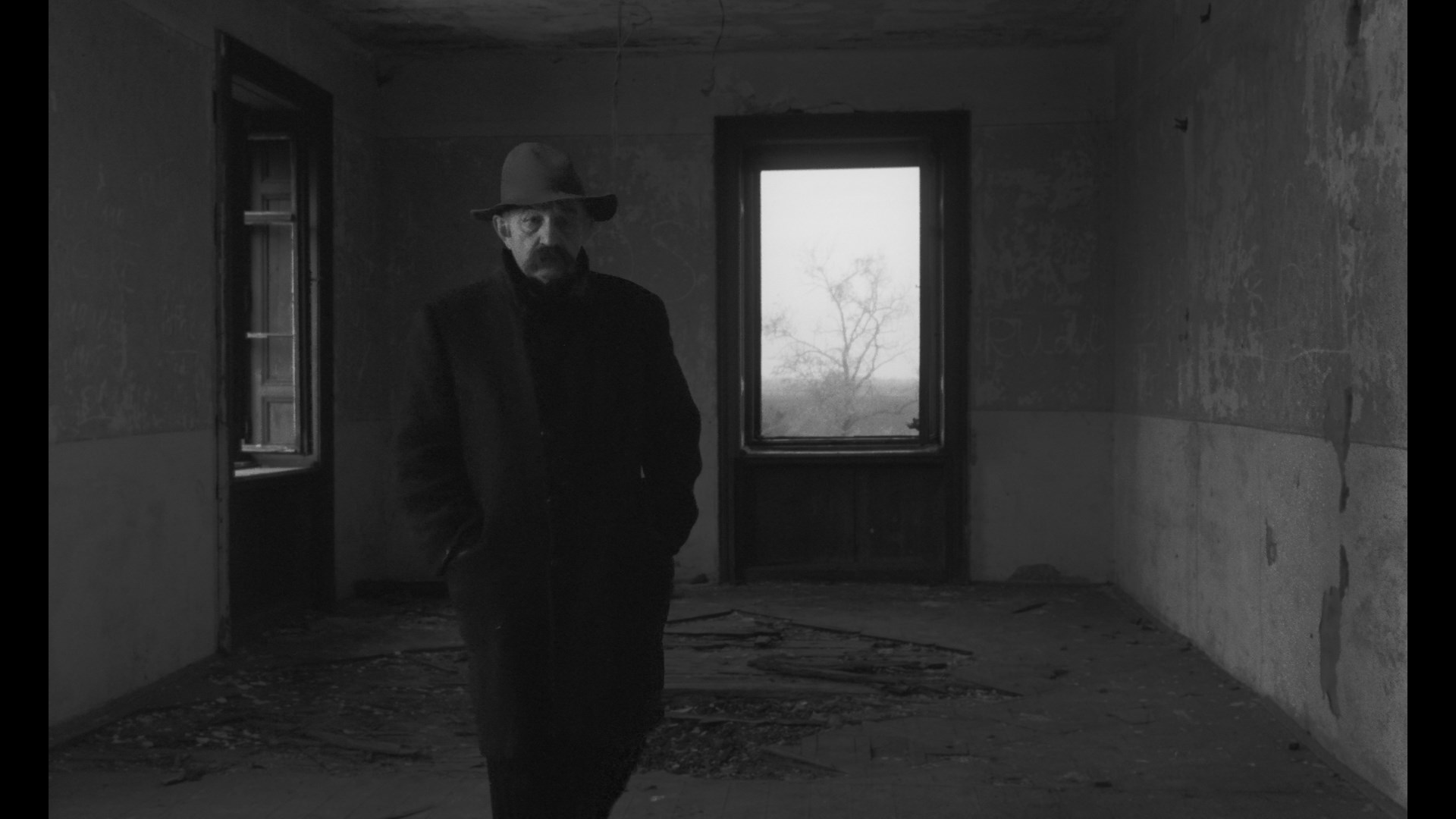 "Orders of Time in Motion" (19m31s) by Kevin B. Lee takes a look at the purpose of the film's long shots (which average out to about 2.5 minutes overall) as they invite the viewer to bring their own perceptions into the images on screen with the camera movement inviting you to find your own way into the film and its human elements in a way unlike traditional cinema. A 2007 archival interview with Tarr (23m7s) conducted by Howard Feinstein at the Walker Art Center spends some welcome time with the filmmaker discussing the film, his approach to Krasznahorkai after receiving the manuscript for the source novel many years earlier, and the theme of loneliness that dominates the film. The U.S. reissue trailer is also included; the specs list a new essay "How to Watch Sátántangó" by Janice Lee and Jared Woodland, though that wasn't in the edition provided for review.