SANTO IN THE TREASURE OF DRACULA

Perhaps the greatest cinematic institution ever to come out of Mexico, the masked wrestler El Santo ("the Saint") has graced dozens of movies and been immortalized in countless other media, including television and comic books. The burly, heroic warrior (known to his friends and family as Rodolfo Guzman Huerta) became both a children's icon and a monster movie staple, battling countless beasties (human and otherwise) in and out of the wrestling ring. 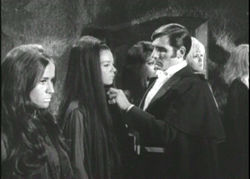 In The Treasure of Dracula (or as it's usually called, Santo en el tesoro de Drácula or Santo in the Treasure of Dracula), crafty inventor Santo unveils a time machine he's invented with the aid of his comic-relief sidekick, Perico (Alberto Rojas). Unfortunately no one believes him, so Santo finds a guinea pig in the form of Luisa (Night of the Bloody Apes' Noelia Noel), the daughter of his trusty scientific pal, Dr. Sepulveda (The Bloody Vampire's Count Frankenhausen himself, Carlos Agostí). Unfortunately Luisa winds up at the turn of the century with Dracula (Monti) prowling the streets, and it's up to Professors Van Roth (Fernando Mendoza) and Soler (Jorge Mondragon) to stop the bloodsucking fiend and his vampire brides. Soon Luisa falls prey to the smitten vampire (who also boasts of his treasure-filled coffin) but gets zapped back to the present before she winds up on the wrong end of a stake. Unfortunately, Dracula's curse refuses to die, as Santo and his compadres team up to find the treasure and prevent the world from falling into the hands of the revived Count. 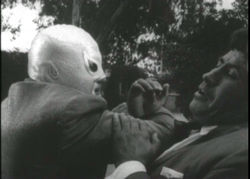 Filled with incident and horrific flourishes, Treasure of Dracula is comparatively low on the wrestling but high on entertainment value. By this point director Cardona was an old pro at these kinds of things, having already helmed the similar Wrestling Women vs. the Aztec Mummy, Doctor of Doom and several previous Santo titles. The narrative's mixture of gothic horror, boy's adventure thrills and pop-art sci-fi makes for a peculiar experience, though the actors somehow play it all with a straight face (except for the intentionally goofy Rojas).

Rise Above's DVD presents a fairly nice edition of this worthy Santo outing, one of the many which never benefited from an earlier English-language release. The print is a bit banged up here and there and has a consistent soft haze, but the moody photography looks good enough with reasonable detail during interior scenes. Optional subtitles are legible and seem well translated. The packaging sets the template for the company's other Santo titles: a trailer for the newer Santo Infraterrestre and the vintage Santo and Blue Demon vs. Dr. Frankenstein; "The Best of El Santo" (a brief, choppy highlight reel); and a Santo photo gallery. The liner notes by David Wilt are extremely handy, pointing out that this was also shot in a sexier nudie version as El vampiro y el sexo. Now that would have made one heck of an extra! (There's also an appetizing poster for this variant in the book Mondo Macabro.)

SANTO IN THE VENGEANCE OF THE MUMMY 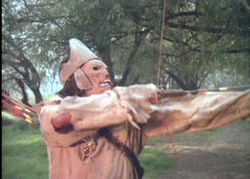 While the gang is camped out one night by the fire, the professor shares with them the terrifying story (shown in flashback) of Prince Nonoc, whose love for a virgin sacrifice doomed him to an eternity of mummyhood protected by a sacred scroll. Of course the trespassers press on anyway and are soon being picked off by the skull-faced mummy, armed with a bow and arrow.

A heavily padded but enjoyably silly Santo outing, Santo in the Vengeance of the Mummy (Santo en la venganza de la momia) works best during the aforementioned flashback, obviously inspired by the 1959 Hammer version of The Mummy, and the rampage of the mummy who may not be all that he seems. On the other hand, a goofball twist ending is followed by an insane amount of wrestling footage to close out the film, 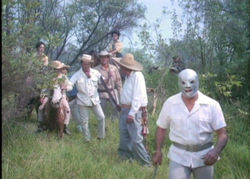 accompanied all the while by Agapito's gleeful reactions to the antics of heroic Santo. As usual director Cardona keeps things moving simply without much in the way of style or character development; this is pure drive-in fodder for the weekend and none the poorer for it.

Rise Above's DVD contains one of the best of their Santo transfers; apart from the damaged opening credits, the film is presented in excellent condition with wonderful color saturation. Though it doesn't match the later Santo/Blue Demon films in terms of sheer monster excess, this would make a decent introduction for newcomers. Extras are identical to the other Rise Above Santo releases; inexplicably, the sleeves for all of their color Santo titles only feature black and white stills. 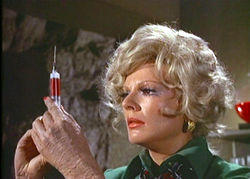 While performing his usual heroic feats during a wrestling bout, mighty masked Santo spills some of his precious blood near the audience. Soon this sanguinary spillage is scooped up by a mysterious attendee, Dr. Freda Frankenstein (Romand), who spirits it back to her laboratory where she keeps two of her monstrous creations, the half-ape Truxon and patchwork man Ursus. The distaff Frankenstein needs Santo's essence to create more of her powerful youth serum, which provides temporary relief from the ravages of aging. Unfortunately her experiments now indicate she needs a bigger supply, so the lady doctor sets up an elaborate trap to lure in the healthy wrestler. 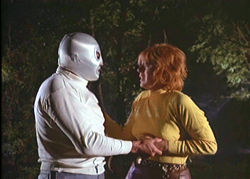 Accompanied by the lovely Elsa (Sonia Fuentes), Santo journeys to the remote lab, where all hell soon breaks loose. 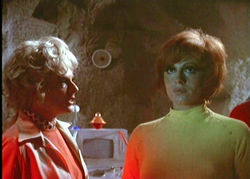 Atmospherically shot and less reliant on humor than many other outings, Santo vs. Frankenstein's Daughter (Santo contra la hija de Frankenstein) benefits from a strong villanous performance by Santo pro Romand and a couple of memorable monsters. The opening third is a bit pokey as the characters' motivations and relationships to each other are spelled out, but once the fighting and rescue attempts kick in, this is fine popcorn fare. Rise Above's DVD looks nice overall, though the image gets a bit gritty-looking at times with what appears to be a sharpness-enhancing video effect. Extras are identical to the other Rise Above Santo releases.

SANTO & BLUE DEMON VS. DRACULA AND THE WEREWOLF

Scheming do-badder Eric (Alfredo Wally Barrón) has come up with a diabolical plan to unleash evil upon the world. He kidnaps Professor Cristaldi (Jorge Mondragón) and, in one of the gorier Santo moments, uses his blood to revive Dracula 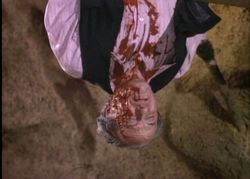 (Aldo Monti, reprising his role from Treasure of Dracula) and Rufus Rex the Werewolf (Agustín Martínez Solares, Jr.), both of whom were slain by Cristaldi's ancestor four centuries earlier. As this nasty trio amasses a monster army, Santo, Blue Demon and the lovely Lina (Nubia Marti) get wind of the scheme and infiltrate the monsters' lair for some old-fashioned brawling and bloodshed.

One of the more enjoyable and fast-paced Santo outings released to date, this character-packed monsterthon (original title: Santo y Blue Demon contra Drácula y el Hombre Lobo) should be enough to keep both horror and wrestling fans delighted. Officially designated to above-the-title status, Blue Demon is a decent enough crimefighter but shares the same personality deficits as El Santo himself, but with far 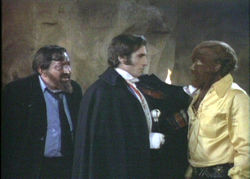 less to do. Fortunately the mixture of creatures and lovely ladies makes up for the buff heroes' blandness, as the film bends over backwards to pit each possible combination of man and monster together in a showdown. The color photography is also extremely stylish and vivid, among the best of its period, though the generic background used during those wrestling scenes was starting to look a little tired by this point. Interestingly, the use of multiple monsters and heroes now veers this series a bit closer to Paul Naschy territory, so fans of that barrel-chested monster icon will probably find this worth a watch, too.

The visual textures of Rise Above's DVD presentation are satisfactory, though the elements appear to have been battered around quite a bit. Still for an obscure title never available before in English, this is overall an acceptable disc. Some compression defects crop up more than the other titles, however, and dark scenes tend to look rather messy; fortunately these are limited mainly to the opening half hour. Extras are the same as previous Santo titles.

Though he'd already faced off against Frankenstein's daughter, Santo finally got a turn with the original mad scientist (well, 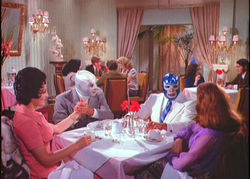 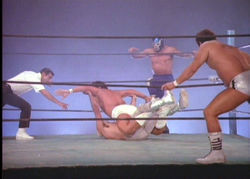 kept preserved in a transparent coffin. After numerous captures and escapes, Golem becomes a professional wrestler and faces off against El Santo in the monster mash finale.

The last Santo film from director Delgado, this enjoyable but decidedly slapdash outing features a great villainous turn from Russek, some fetching female leads, and a surfeit of action both inside and out of the ring, though the budgetary limitations were really taking their toll by this point. The monster make-ups look rather careless now and are largely concealed by the decision to hide Golem behind a mask during the third act. 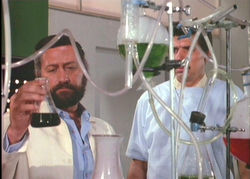 Also the delicate gothic photography of the earlier Santos was largely extinct here, replaced by simple nailed-down camerawork that gets the job down without any fuss or style. As a Santo romp it's still plenty of fun, but the film pales a bit compared to its predecessors.

Print quality here is a bit better than the previous Dracula and the Werewolf, though some scuffs and scratches are still in evidence. The colors are robust enough, particularly during the wrestling scenes, while the optional English subtitles are excellent. The disc repeats extras from earlier entries in the series, and David Wilt's informative notes trace the Mexican fascination with cinematic Frankensteins since the 1940s.

Though billed as a Santo film, this is actually a vehicle for the Son of Santo ("el Hijo del Santo"), though since they're both musclebound wrestlers wearing silver masks and everyone calls him "Santo" anyway, few will be able to tell the difference. In a CGI-laden opening, we're shown how spikey-facead aliens have long been present on Earth but live deep underground, waiting for the right time for their brethren to arrive and 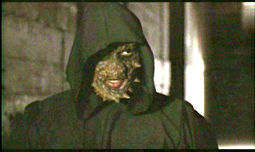 help them rise to the surface. Cut to a remote country road, where young Diego watches in shock as his parents are beamed aboard a spaceship while fixing their truck. Meanwhile Santo, Jr. is busy in the ring with his pal Blue Panther, who seems unusually aggressive during the match. Afterwards Santo watches the bout again on video and determines that his friend was actually trying to kill him and may not be himself. Sure enough, Santo and Diego cross paths in a parking garage where the possessed Blue Panther, an alien and a bunch of mind-controlled henchmen show their true colors. Barely escaping in his flying car, Santo must discover a way to stop these nefarious creatures from taking over Mexico before the sort-of-special effects-filled climax. 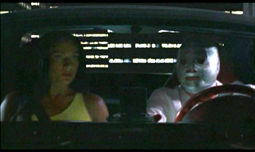 Though it has all the ingredients one would expect - wrestling, monsters, lots of fighting, and the silver-masked one himself - Infraterrestre is a strangely leaden affair, more reminiscent of cheapo direct to cable fare than a real low budget drive-in outing. The middling CGI effects, clunky techno music and often murky cinematography are the main culprits, and even by Santo standards, the acting (especially little Diego) is way below par. Still, if you gotta have a Santo fix, this might do the trick on a really slow evening.

Rise Above's elaborate DVD is the most impressively mounted of the Santo collection, featuring a crisp enough transfer with optional English subtitles. The surround audio works well enough considering the hit and miss nature of the soundtrack itself, and the dialogue sounds nice and clear. Most of the extras aren't English-friendly, but for the record, you get deleted scenes (mostly chatter), a blooper reel, an interview with the director, video footage of a wrestling match between Santo and Blue Demon, a photo gallery, and Rise Above promotional filler.