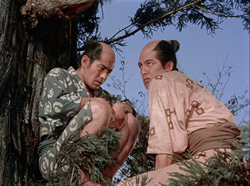 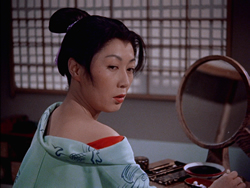 rai, another major sword-wielding breakthrough was also seen in the first part of a Toho trilogy charting the adventures of Takezo (Mifune), an orphaned soldier who becomes a legendary knight errant known as Musashi Miyamoto. Shot in saturated Eastmancolor and featuring some of the best work of the legendary Mifune's career, the film series was released over a two-year period and for all practical purposes should be viewed as one long movie simply broken into three sections.

Part one essentially follows the "origin story" template as Takezo and his closest friend, Matahachi (Mikuni), become untethered from their lives as soldiers after a defeat in battle. Their paths cross with a widow and daughter who promptly wreck Matahachi's engagement plans while getting Takezo sent to certain death as a traitor. However, the compassionate Buddhist priest Takuan helps him avoid death and teaches him to follow a more Zen path which also prompts him to become Musashi, a swordsman answering a higher calling. In the second and most action-loaded part, he attempts to make his name as a swordsman by taking on a famous training school whose members fall under his blade one by one. Meanwhile a romantic triangle develops between Musashi and his best friend's former fiancee, Otsu (Yachigusa), as well as the young Akemi (Okada). Musashi also catches the eye of Kojiro (Tsuruta) 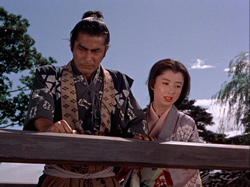 , a rival swordsman who, in the third film, challenges Musashi to a duel to win the shogun's favor. Both men agree to face off i 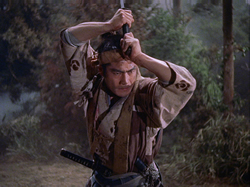 n one year's time, with their lives taking very different directions along the way to their final confrontation.

The first Samurai film opened in the midst of a major surge in international awareness for Japanese cinema, and it even picked up an Honorary Oscar (under the title Samurai, the Legend of Musashi), the third Japanese film to do so (after Rashomon and Gate of Hell) before the regular Foreign Language Film category was introduced. The film's real historical basis gives it a different flavor from the more self-contained samurai films of the same period; in fact, Musashi remains one of the most famous Japanese warriors of all time, inspiring numerous other interpretations both in film and on the page. This one plays fast and loose with many of the facts, but it hardly matters given the sheer entertainment value, the force of Mifune's performance, and the tight direction by Hiroshi Inagaki, who went on to direct the sprawling classic, Chushingura. Like that later film, the Samurai trilogy is just as concerned with character development as violent incident, striking a balance that makes the three films fly by with surprising ease.

Criterion first visited these films back in the laserdisc days and then again on DVD, taken from adequate but now tremendously dated masters. An upgrade for these seem 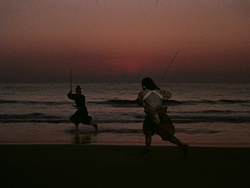 ed inevitable given the popularity of the series and its longstanding presence in the Criterion line, and happily the Blu-Ray version (spread out over two discs) i 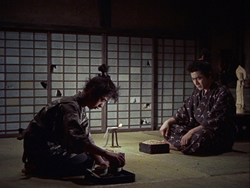 s such a massive improvement across the board it's safe to say few will look at the standard def predecessors again. The original negatives were kept in extremely fine condition, and aside from a few registration issues inherent in many Eastmancolor productions, these look as could as anyone could possibly hope. Colors are beautifully saturated and far more accurate than before, while the 1.33:1 framing is kept intact along with the original Japanese mono soundtrack (lossless here with optional English subtitles).

On the extras front you get trailers for all three films, a three-part interview (about 27 minutes total but broken up with relevant portions for each film) with translator and historian William Scott Wilson (who lays out the real-life Musashi's accomplishments and covers his legacy in print and film), and a booklet containing an essay by Stephen Prince (including coverage of Inagaki's historical films and his other versions of the Musashi story and its characters) and Scott's overview of the real Musashi's landmark The Book of Five Rings.