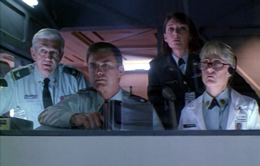 The brutal transition experienced by horror movies after the theatrical and video boom of the '80s throughout the 1990s was a strange and mostly frustrating thing for genre fans, at least until DVD came around. Films were often cut, poorly distributed, or buried entirely despite page 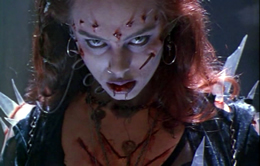 s of coverage in places like Fangoria, and one of the films thrown off course (at least as far as finding an audience) during this period was Return of the Living Dead III. The first film in the series was an undisputed classic, a major hit on cable and home video after a decent run in theaters and now regarded as perhaps the best American zombie without a directing credit to George A. Romero. The second one took a serious nosedive, irritating fans by overdosing on the comedy and delivering very few thrills; however, it still has its fans and looks positively brilliant compared to the two junky series entries made in 2005.

And then there's this one. Producer Brian Yuzna, who hit paydirt working with Stuart Gordon on Re-Animator in 1985, made the leap to directing in 1989 with two uneven but wonderfully squishy horror offerings, Society and Bride of Re-Animator, both of which were sabotaged by the growing death grip studios were beginning to exercise over movie screens. Both ended up essentially going straight to video (the former film much, much later for Americans), with the MPAA demanding some minor cuts along the way. Then in 1993 came Return of the Living Dead III, from a script by John Penny (also one of the scribes for The Kindred and The Power), which ditched most of the comedy, piled on the grotesque effects, and instead delivered... a love story. Well, a gory, kinky, morbid, and wildly entertaining love story.

At a military research facility, Colonel Reynolds (Farscape's McCord) is about to hand over command to a new leader, Colonel Sinclair (Superman II's Douglas), but not before a demonstration showing how zombies affected by the Trioxin chemicals from the prior films can be instantly "frozen" into paralysis with a strategic bolt to the head, then thawed out again later to become essentially unstoppable warfare machines. Meanwhile Reynolds' son, Curt (Lord of Illusions' Edmond), has swiped a security pass and snuck into the building with his girlfriend, Julie (Nikita's Clarke), both of whom witness the undead demonstration firsthand -- including a bloody miscalculation that heads to dead soldiers. The teens return home only for Curt to find out his dad's about to be transferring, dragging them both to Oklahoma City; furious, Curt runs away from home with Julie on his motorcycle, only for an accident to send her headfirst into a tel 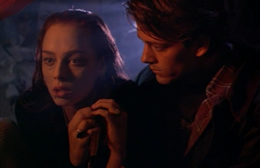 ephone poll. Shocked with grief, he smuggles her body back onto the base and pops open a canister of the reanimating chemical, which returns Julie from the dead. At first she seems fine, but soon she develops an uncontrollable hunger for human brains that can only be suppressed by physical pain. Even worse, the contagion is starting to spread to a few other unlucky people in the area.

Many zombie fans were surprised by this film, which certainly delivers the gore in bucket loads but also offers a novel twist by focusing on Julie's character. Her method of suppressing her hunger by adorning her body with knife blades, wire springs, chains, and broken glass results in a real show stopping moment in the third act, and Clarke's excellent performance results in one of the most unique, memorable horror "heroines" of the decade. She's a perver 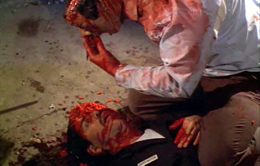 se, fascinating, creepy, and always sympathetic character; not surprisingly, the gorgeous actress has gone on to enjoy a long acting career since (now under the name Melinda Clarke). Edmond doesn't even try to compete; he basically has to look confusing and frantic for much of the film, but he's good enough to anchor the central macabre romance all the way to its inevitable finish. It's not a perfect film by any means; in particular, the drab synth score by Barry Goldberg sounds like a string of rough drafts and probably should've been replaced, and like a few too many other monster movies from the same period, it moves the action into a dark sewer for a little longer than it probably should. However, the film gets so much right you really won't care, and in typical Yuzna fashion, the last ten minutes piles on an avalanche of wild visuals that won't be spoiled here.

Trimark, the long-defunct studio who scored a major midnight hit with Peter Jackson's Dead-Alive in 1992, snapped this one up but barely got it into a handful of theaters around Halloween of '93, where it played in an R-rated edition dropping not only some nasty gore highlights (including some brain-splattering mayhem and a jolting lower lip ripping near the end) but, not surprisingly, some of the more prolonged and extreme moments of Julie's self-mutilation as well. Both the R-rated and unrated versions soon popped up on VHS and laserdisc in an okay full frame version from the company's video arm, Vidmark, where it managed to win over many buffs who'd felt burned by the second installment. Unfortunately its luck didn't hold out for long; when the DVD era kicked into full gear, the unrated version became almost impossible to find, with collectors hanging on to their old unrated copies for dear life. The rights passed over to Lionsgate, who released only the R-rated cut in a matted (1.85:1) transfer along with commentaries by Yuzna and Clarke, which salvage what is otherwise a disappointed (and now discontinued) release. The unrated version popped up on DVD occasionally in Europe (most notably in England and the German label Laser Paradise), ripped rather badly from the laserdisc and hardly worth the upgrade thanks to compression problems and generational loss. The announcement of a German Blu-Ray seemed like a dream come true, but that turned out to be a complete disaster; censored by over 20 minutes(!) and badly upconverted from the same old master, it's rivaled in worthlessness only by the same country's atrocious excuse for a Blu-Ray of Ninja III: The Domination.

That brings us to the 2012 Scandinavian DVD from Another World, a label known for their excellent work on several key horror and giallo titles. In typical fashion this Region 2 PAL release comes with menu and subtitle options in languages like Danish, Swedish, and Norwegian, though all can be shut off to just enjoy it in standard two-channel English stereo. This appears to be the best available to date (unless anyone knows of another option out there hiding somewhere), and it offers the full uncut version (clocking in at 93 minutes in PAL speed) in both the familiar open matte 1.33:1 version and slightly matted 1.56:1 anamorphic widescreen option. In typical Yuzna fashion this was framed with an eventual video release in mind, but the full frame version also exposes some bobbing boom mics at the top of the screen (most damagingly during the first briefing scenes with Sarah Douglas). Go for the widescreen version, which looks nicely framed and has much more vertical information than the overmatted American DVD. The video quality still isn't what you'd call spectacular; it still has that soft, somewhat dated early '90s look to it, but at least the colors are nice, detail is pretty good and steady, and it isn't littered with all the compression issues found on most other releases. So, we now have this one with two welcome framing options, completely uncut, and solid enough video quality. You'll want to hold on to those American discs for the extras, but it's hard to imagine any fans of the film deciding to watch any other version besides this one right now. Currently this edition is imported in America by Diabolik DVD.