Heavily influenced by the Italian neorealist movement that took hold in the 1940s, this early melodrama from director/actor Pietro Germi (Divorce Italian Style) offers a 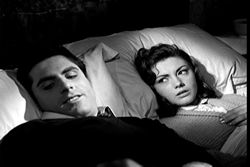 different take on material recently covered by Vittorio De Sica in milestones like Umberto D. and The Bicycle Thief. Elements like the heartwrenching child and the concerned patriarch are imbedded into a more complex story of the Marcocci family gradually unraveling when one argument too many sends the the father, train conductor Andrea (Germi), into an alcoholic spiral. Meanwhile his daughter, Giulia (Lisa and the Devil's Koscina), takes up with a 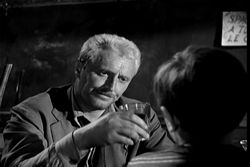 manipulative lout and plans to marry him, while only the youngest son, Sandro (Nevola), maintains faith of pulling his father back from the abyss... which becomes especially challenging when tragedy strikes on the job.

Though beautifully made and exquisitely performed, The Railroad Man (Il ferroviere) may have some difficulty finding a large audience without any kind of social context. The aforementioned De Sica films remain universal thanks to the simplicity of their narratives and performances, but this film's specific evocation of a particular time and place - intended as a condemnation of an Italian social system that puts more pressure on the working man than any human can bear - offers a challenge to younger cineastes who may find it antiquated or irrelevant. However, when viewed in tandem with some of the director's more widely seen work, the film should function better as an artistic statement and one of the most successful examples of a director doing double duty behind and in front of the camera. Germi's instinctive knack for capturing expressions (both his own 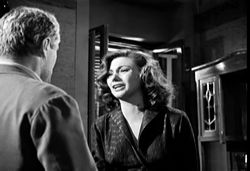 and those of his fellow performers) is uncanny, and the film manages to veer back on track every time the story threatens to veer into sentimentality.

Though The Railroad Man was granted a nominal release in American theaters and briefly on home video, it remains largely unknown outside Italy (perhaps due to the nondescript title). NoShame's immaculate disc continues their impressive track record with a crystal clear transfer from the original negative; the black and white photography is so clear and luminous you'd be hard pressed to pinpoint the year in which it was shot. The audio is presented only in the original Italian mono, with optional English subtitles; fortunately it's quite clear and does justice to the haunting score by Carlo Rustichelli.

Disc one contains the feature itself along with an unusual Italian theatrical trailer ("It's not in stereo or Cinemascope!") and a poster and stills gallery. Disc two contains a lengthy documentary, "Pietro Germi: A Classic on Its Own" [sic], an overview of the director's career featuring interviews with Rustichelli, directors Mario Monicelli, Giuseppe Tornatore (Cinema Paradiso), and Damiano Damiani, producer Alfredo Bini, screenwriters Luciano Vincenzoni and Tullio Pinelli, editor Sergio Montanari, cineamtographer Aiace Parolin, and actresses Franca Bettoia and Silvana Pampanini. The focus remains on the main feature, but the sheer volume of information provided makes this a valuable companion piece to Criterion's deluxe set of Divorce Italian Style. The second disc also includes a handful of screen tests to round out the package; both discs also come with a illustrated booklet containing a Germi biography and filmography.