After the death of platinum-blonde sex goddess Marilyn Monroe in 1962, her two most famous bombshell competitors, Jayne Mansfield and Mamie Van Doren, 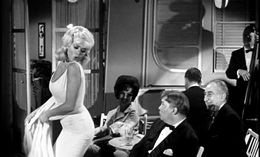 found a strange void to be filled in the entertainment world. Television was taking over, politics were changing, and society was gradually getting racier. Following MM's legendary Playboy-posing steps, both women hooked up with bespectacled comedian Tommy Noonan (Monroe's co-star in Gentlemen Prefer Blondes and brother of John Ireland) to cash in on the growing nudie craze, which had steadily been building steam since Russ Meyer's The Immoral Mr. Teas. The result? The first two major celebrity skin films of the 1960s, and the first time American starlets bared it all on-camera in mainstream films.

First up was Jayne in Promises! Promises!, a dopey sex comedy (no relation to the Burt Bacharach musical) that feels like a static TV sitcom spiced up with some topless and derriere 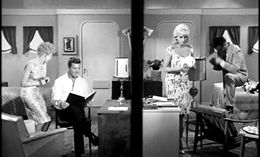 shots of JM to keep the audience awake. The "plot" follows two couples -- sexy Sandy (Mansfield), sexually-dysfunctional Jeff (Noonan), sultry Claire (McDonald), and muscle stud King (Hargitay, Mansfield's real-life spouse) -- who become chummy when they wind up in adjoining rooms. One night they all have a swinging party where Sandy wiggles her fanny in everyone's face while singing "Promises Her Anything," and after too much alcohol, both wives wake up pregnant. But who's responsible?

Shot almost entirely in single-take medium shots, Promises! Promises! pretty much bets everything on the physical charms of Mansfield, a guaranteed special effect to draw in audiences. Her simultaneous Playboy spread (in color, unlike the actual feature) didn't exactly hurt, either; the end 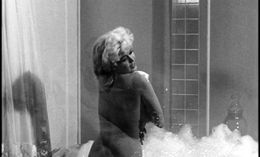 result still feels pretty innocuous, with Jayne's nudity rendered in a completely non-sexual context (writhing around while dreaming in bed, rolling around in a bubble bath, etc.). She and Hargitay don't have much of a chance to generate any sparks together (small wonder since they got divorced shortly after filming), but the hammy Noonan is such a weird match one can only wonder how they ever got married in the first place. Don't expect much and you'll get some goofy, harmless fun, as well as an essential entry in the celebrity skin archives.

Though Mansfield's film was helmed by regular TV veteran King Donovan, Noonan stepped up to the director's plate immediately thereafter for another "famous blonde naked in a bath" movie, 3 Nuts in Search of a Bolt. Though Mamie's quite a bit more demure than Jayne (not baring much more than some cleavage and part of her rump), the film itself is substantially more ambitious and entertaining thanks to a surprisingly clever premise and enthusiastic performances. Here Mamie is Saxie Symbol, a burlesque dancer who lives on the cheap with the other two "nuts," male model Bruce (Cronin) and car salesman Joe (Gilbert). Deciding they need therapy but unable to afford the hefty fees, they recruit a struggling actor (Noonan) to represent all of their personalities

to a psychiatrist (Rodann). Unfortunately things don't turn out quite as planned when Nonnan's sessions become an instant pop culture sensation, with his split personalities captivating TV viewers unaware of the truth.

Witty and fairly well-shot, 3 Nuts remains black-and-white for most of its running time but wisely switches to full color for Mamie's strip routines, as well as the much-touted "milk bath" sequence which figured in most of the ad art. Though not quite as breathy or simply eye-popping as Jayne, Mamie displays far better comedic acting skills and displays some nice chemistry with her co-stars (though Noonan still seems to be off acting in his own separate film). The TV/media angle isn't used terribly well (especially compared to 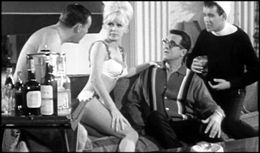 Mansfield's Will Success Spoil Rock Hunter?), but the premise is still enganging enough to keep the story chugging along with going stale.

Naturally the lesser of the two films gets the better treatment on DVD. Both were staples of the early VHS boom but eventually dropped out of sight; the upgraded letterboxed transfers are thus a welcome arrival, with reservations. Promises! Promises! is presented in anamorphic widescreen and looks fairly good, apart from the scratchy-looking stock footage exterior shots of the boat and various locales. The film was presented open matte on tape with a huge amount of dead headroom, so the matted framing here is far more satisfying (and doesn't wipe out any nudity either). 3 Nuts is flat letterboxed and looks a bit rougher in spots; the color sequences in particular exhibit some minor registration problems that could have been corrected. It's still miles ahead of the VHS version, though.

Both discs feature full-color behind-the-scenes galleries showing the female leads in all their undraped glory (with some darn near full frontal shots of Jayne and lots of topless Mamie images that never wound up in the film), plus "hot" (i.e., nekkid) and "cold" (i.e., family-friendly) trailers for each and bonus trailers for Slightly Scarlet and Blonde Ice from VCI (who distributes these releases).