Billed as the world's first penis transplant movie, Percy was (unbelievably) beaten to the punch by one year thanks to Doris Wishman's 1970 grindhouse shocker, The Amazing Transplant. However, Percy can lay 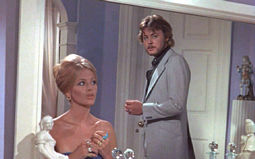 claim as the first comedy about the subject (and thanks to Sex and Zen it wasn't the last, either). Apart from its saucy subject matter, this is really a standard British sex comedy with the usual double entendres, coy starlets, and featherweight storytelling.

The title character (well, he's technically unnamed except for part of his anatomy) actually only lasts a few minutes into the film as he plunges from the window of bedmate Helga (Elke Sommer), whose husband arrives home unexpectedly. Unfortunately the airborne Percy lands on top of poor young Edwin (the usually sinister Hywel Bennett), who winds up damaging his manhood beyond repair in the process thanks to a strategically placed chandelier. Luckily Dr. Whitbread (Denholm Elliott) is on hand to test out his recently perfected organ transplant process which moves Percy's member onto Edwin's, a procedure likened by one character to trading in a malfunctioning old car for 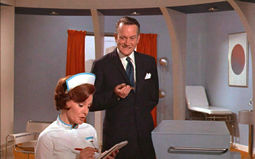 a Rolls Royce. The hospital staff even tests out the new "Percy" by sending a stripper nurse into Edwin's room, with spectacular results. However, Edwin finds his latest addition affecting his personality; in short, apart from coping with the departure of his wife with his best friend, he's traumatized by the thought of walking around with used goods and decides to research Percy's past to uncover the truth behind this mysterious "gift." Thanks to a helpful nurse who arms him with a list of deceased patients from that fateful day, Edwin sets off to meet his destiny.

Firmly in line with the Carry On films and the more racy line of Brit comedies like Here We Go 'Round the Mulberry Bush, Percy offers enough titillation to keep mainstream audiences happy without pushing any nasty buttons that could really offend anybody. The women all look nice and wholesome, with established pin up goddesses Sommer and Britt Ekland (who takes a bath of course) making the most vivid impressions during Edwin and Percy's voyage of self-discovery. Most of the one-liners fall flat, but the film is so casual and upbeat that it's hard to really dislike. Part of this credit must go to the sterling music by the Kinks(!), again in keeping with the use of bands like Traffic to add some hip value to jittery sex comedies. The most curious thing about Percy is trying to figure out exactly who its target audience was; music aside, there's really no one young enough in the film to make it all that appealing for the youth market, but the approach is too 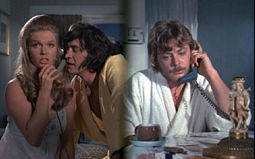 simplistic to make it solid adult viewing fare. What we're left with is an odd little curio, enjoyed best as a time capsule of Britain during a turblent period of cultural change. Harmless, disposable, and a quirky little entry in post-mod cinema.

Anchor Bay has added yet another long unavailable swinging classic to the home video roster, following its miraculous salvaging of such other seemingly lost causes as Candy and I'll Never Forget What's 'Is Name. This really isn't a pretty film to look at, so despite the latest advances in transfer technology, this still looks like a cheap, washed out early '70s British film shot on questionable film stock. The elements themselves appear to be in good shape, and it's hard to imagine how the film could have been improved. The 1.66:1 framing appears to be accurate and perfectly captures the few split screen sequences. Extras are limited to the jokey theatrical trailer (complete with fig leaf) and solid liner notes by Matt Kiernan, who puts the film and its entire genre into cultural context.