It looks and feels for all the world like a Jess Franco film, but this outrageous cheapjack European mixture of Gothic ambience and Ed Wood insanity was actually the handiwork of director Pierre Chevalier. Chock full of the usual Eurociné staples like nudity, insane plotting, even crazier dubbing, and a very limited cast of characters, this potentially hazardous brew haunted video stores for years as The Invisible Dead from Wizard Video before turning up on DVD with its Orloff origins intact. 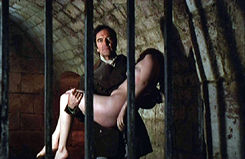 Our story begins in tried and true fashion with a stalwart, naive hero, Doctor Garondet, welcomed into the decaying castle of Doctor Orloff (Franco regular Howard Vernon). Appartently the doc's experiments have taken their toll on the local peasants and even Orloff's own nubile daughter, Cecile (Brigitte Carva), who is convinced that an invisible maniac has sprung from her father's work. As it turns out, Orloff has been experimenting with the creation of a "superior" race of homo sapien, though the punchline is not at all what most viewers will expect. In the meantime a peasant girl is ravished by an invisible man (conveyed by having the girl roll around naked in the hay while flailing her arms around), and the only way to expose the transparent fiend involves our protagonists walking around the castle hurling talcum powder in the air.

There really isn't much else that can be said about this film without spoiling the ending, which ranks up there with Night of the Lepus for insane monster concepts. At 76 minutes, the film moves along from one heavy breathing incident to another with lots of moody sets and lighting to set the scene. As usual Vernon is fun to watch, trying his best to get through the material with a straight face, while the screenplay throws in every convention you can think of: terrified villagers, dank dungeons, damsels in peril, long walks through dark hallways... but it's all rendered in such a deliberately skewed fashion that even die hard Eurofanatics will be glued to their televisions in disbelief. 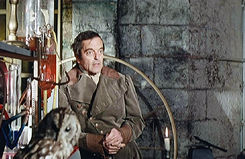 Apart from its most famous incarnation as The Invisible Dead (complete with a misleading but terrific oversized cover depicting zombies bursting from the earth in front of a castle), this film has also been known as Orloff Against the Invisible Man, Love Life of an Invisible Man, and Dr. Orloff's Invisible Monster. The Image DVD retains the Against title on the print and menu but bills the film on the cover under the more accurate Orloff and the Invisible Man, since the two entities are technically not against each other. The source material is in wonderful shape, apart from the weird splices and erratic film stock conditions which have plagued this film since its inception. Colors are dynamic and striking, while grain is kept to a surprising minimum even in the darkest scenes. The disc contains the dialogue tracks in English, French, and German mono, all of which are at least partially dubbed. As with many Eurociné titles, there is no truly definitive edition; however, this is probably as close as we'll ever come. The disc also contains a French trailer (with most of the sleazy highlights), as well as alternate sequences shot with clothed actresses. The "rape" sequence is especially surreal in this variant form and makes for a welcome ableit highly bizarre addition.