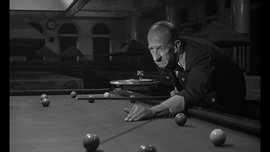 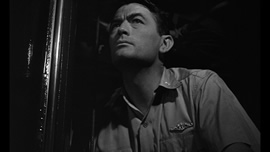 embraced the post-nuke film in a big way with On the Beach, a prestigious adaptation of Nevil Shute's best-selling novels published two years earlier. American films dealing with the aftermath of nuclear war had been around before, of course, with Arch Oboler's Five leading the pack in 1951 and even another 1959 film, The World, the Flesh and the Devil, taking a sort of allegorical stab at the topic. However, this was the first major all-star production to tackle the issue and become a major event, courting awards and earning respectful critical notices. With the Cold War revving up for what would turn out to be a decades-long state of affairs, audiences were also primed for a grim, pessimistic look at the long decline of the human race after the missiles have already flown.

American submarine captain Dwight Towers (Peck) commands the last of the country's naval vessels near Australia, the only area so far unaffected by the fallout spreading across the globe after a nuclear conflagration. The crew decides to dock and check out the situation in Melbourne, where the unaffected population is maintaining a semblance of normalcy. Among the residents is a naval lieutenant, Peter (Perkins), who has just had a new daughter with his wife, Mary (Anderson). Then there's Moira (Gardner), assigned as Dwight's guide during his shore leave, with whom he might be starting a tentative romance. Finally we have nuclear scientist and amateur racing enthusiast Julian Obsorne (Astaire in his first non-musical role, delivering the film's strongest performance), who gets to live out his dreams in the film's most indelible sequence. A Morse code signal coming from America's West Coast means Dwight's time in Melbourne may be limited, and with suicide pills being kept ready should the radiation clouds arrive, it may be only a matter of time before everyone faces a final reckoning. 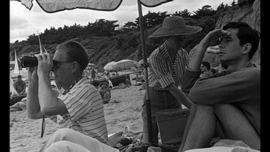 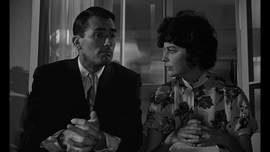 Both a powerfully acted drama and a scare film par excellence, On the Beach isn't terribly explicit about the horrific implications of its story (which involves an act near the end you still wouldn't see in most mainstream films); however, the implications are enough as we get to know the main characters quite well and contemplate what it might mean for humanity to have a last stand after such a self-destructive course of events. The film was given a major rollout across the globe with an unprecedented simultaneous premiere in six continents, and while it became a much-discussed pop culture event (with the recurring song "Waltzing Matilda" becoming a popular standard in the U.S.), the film was limited in its eventual box office and awards appeal by the sheer nature of the subject matter. Just bear in mind its competition the same year included Ben-Hur, North by Northwest, Some Like It Hot, and Pillow Talk. This would also turn out to be the first big "issue" movie for producer-turned-director Stanley Kramer (in only his fourth feature film), who had just scored a hit with The Defiant Ones, a more lean and efficient film that couched its message about race relations in the framework of a jailbreak story. From here his dramas became even more grandiose with titles like Inherit the Wind and Judgment at Nuremberg, understandably resulting in a switch to far more comic material in the mid- to late-'60s.

As with many other United Artists productions of the period, On the Beach was shot a 1.66:1 aspect ratio, though in America it was usually reframed to 1.85:1. MGM's baffling refusal to use anamorphic enhancement for 1.66:1 titles for the first several years of the DVD format's history meant the film was stuck with a lackluster flat transfer, a state of affairs finally relieved with the arrival of Kino Lorber Studio Classics' Blu-ray from a superior HD transfer in 2014. The expected increase in quality is obvious across the board as detail and black levels look far more impressive, and the DTS-HD mono audio does justice 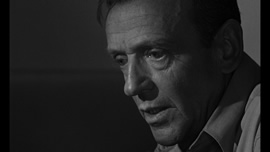 to the haunting score by Ernest Gold. Unlike the MGM edition, the Kino also includes the theatrical trailer for the film's general release, including plenty of hype about its grand rollout with testimonials from 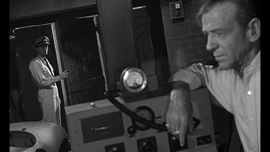 One year later, UK label Signal One took another shot at the title from the same HD source, albeit with slightly richer black levels and a higher bit rate. The frame grabs seen here come from the Signal One release, but you can see a handful of different images from the Kino release by clicking here, here, here and here. The difference is appreciable but may not be gargantuan to casual viewers, but what will definitely make it worth a look is the much heftier slate of extras. In addition to the trailer, you also get a great 19-minute interview with Anderson (who covers the start of her career through her casting on this film and the location shoot, including her brief but memorable encounters with Astaire), a disconcertingly cheerful 9-minute collection of location footage shot by an Aussie amateur filmmaker during the production (mixing color and monochrome with perky intertitles), a collection of photos and artifacts from Kramer's scrapbook, and a gallery of lobby cards. The feature itself can also be played with a commentary written by Dr. Philip Davey (and evidently delivered by a voice over actor), which takes a very Aussie perspective on the production with lots of details about the locales, supporting cast, impact on Melbourne culture, and visual tricks to show characters on or within the water and submarine. There's a lot of dead space for the first third or so, but it soon picks up steam and delivers a wealth of valuable information. Definitely recommended.