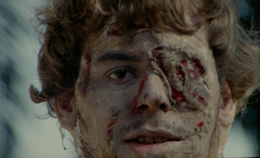 As most Jess Franco fans know, his work took a defiantly weird turn in the 1970s and never really turned back around. His combinations of outrageous gore and explicit sex on the tiniest of budgets are a far cry from the comparatively lavish (if equally idiosyncratic) films of the Harry Allan Towers era, 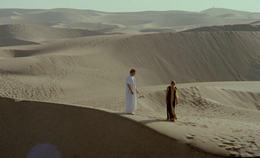 but those willing to persist with the director's odd flights of fancy can find many odd bits of gold while panning through his hundreds of films. While Oasis of the Zombies is basically a work-for-hire assignment filled with an outrageous amount of padding, it does offer a revealing glimpse of the manner in which Spain's most troublesome cinematic talent approaches what should have been a regular genre film.

A pair of nymphets strolling hand in hand through a jungle (while showing off their early '80s short shorts, of course) passes by a hidden Nazi crate filled with gold. Unfortunately their idyllic afternoon is shattered when a pair of rotting hands burst from the earth, presumably dragging both of them to a slow, horrific death. The source of this mysterious, guarded gold is soon revealed when young student Robert (Gélin) is summoned to the African desert following the death of his father. Along with some airhead friends, Robert goes through the effects of the deceased and uncovers a strange story (told in very long flashback) involving millions in Nazi gold buried in the sand, protected by hordes of undead soldiers from the 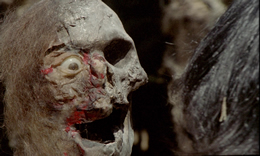 Third Reich, and Robert's late mother, a sheik's daughter who died during childbirth. Robert decides to fulfill his father's quest and sets out to find this hazardous oasis, with a gang of fellow explorers in tow. Naturally the zombies are none too pleased when the infidels arrive.

Still relatively unexplored at the time with only a few precursors like The Frozen Dead and Shock Waves, the Nazi zombie gimmick was evidently a popular one with the low-budget French company Eurociné, who also used it in the more skin heavy Zombie Lake. In fact, Franco's original assignment to direct that film fell through, resulting in his helm 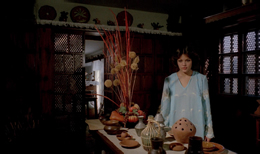 ing of this one instead. The film was shot in both French and Spanish versions, though the former (usually dubbed in English) has been the easiest to find on video around the globe. International viewers have seen this under a wide variety of titles like Treasure of the Living Dead, Bloodsucking Nazi Zombies, Grave of the Living Dead, and Oasis of the Living Dead; the last of these was the version used for Wizard's out of print VHS edition. Likewise, cuts of this film have ranged wildly in content and running time, with one particularly guilty offender dropping all of the zombie footage! The finale is the real reason to wade through the slow stuff, as an army of zombies marches over the dunes through an oil fire at dusk and rips the encampment apart. Sure, the make up is still the same old half hearted latex and cereal mixture found in most '80s walking dead films (Lucio Fulci excepted, naturally), but there's a certain eerie power to Franco's gritty, gory visuals during this climax.

In one of the weirder twists in Franco's '80s period, the aforementioned Spanish version actually has completely different actors for two minor roles (Lina Romay and Eduardo Fajardo), another mus 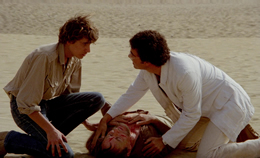 ic score, and a few other odd divergences; you can read an interesting breakdown of the two cuts here. Since both were prepared simultaneously and compare exclusive footage to each, it's tough to call which one is more desirable; apparently Franco went a bit rogue and shot those alternate snippets on the side to assemble a different version for his native country, a truly odd situation.

The "official" Eurociné cut of the film first appeared on DVD from Image in 2001, looking pretty good; the colors are solid, and the letterboxing makes the film far less claustrophobic than the Wizard tape, which was an unwatchable eyesore. Some rough splices and scratches show up here and there, but that seems to be par for the course with pretty much every one of the studio's films. The English and French audio tracks are included in glorious mono but without subtitle options. The back of the box indicates an alternate English opening credit sequence, but this is the one actually included within the print.

Of course, the eventual move to Blu-Ray means this takes a substantial leap up in quality; all of the main footage for the film looks fantastic, while the occasional stock footage inserts (including a disorienting battle sequence) looks about as ratty as it always has. The Blu-Ray contains the export version with both English and French PCM mono audio options, plus optional English subtitles; the French cut is definitely easier to take, so newcomers might want to start with that unless hilariously atrocious English dubbing is the theme of your movie night. The disc rounds out with trailers for the main feature along with Zombie Lake, Female Vampire, and Exorcism.